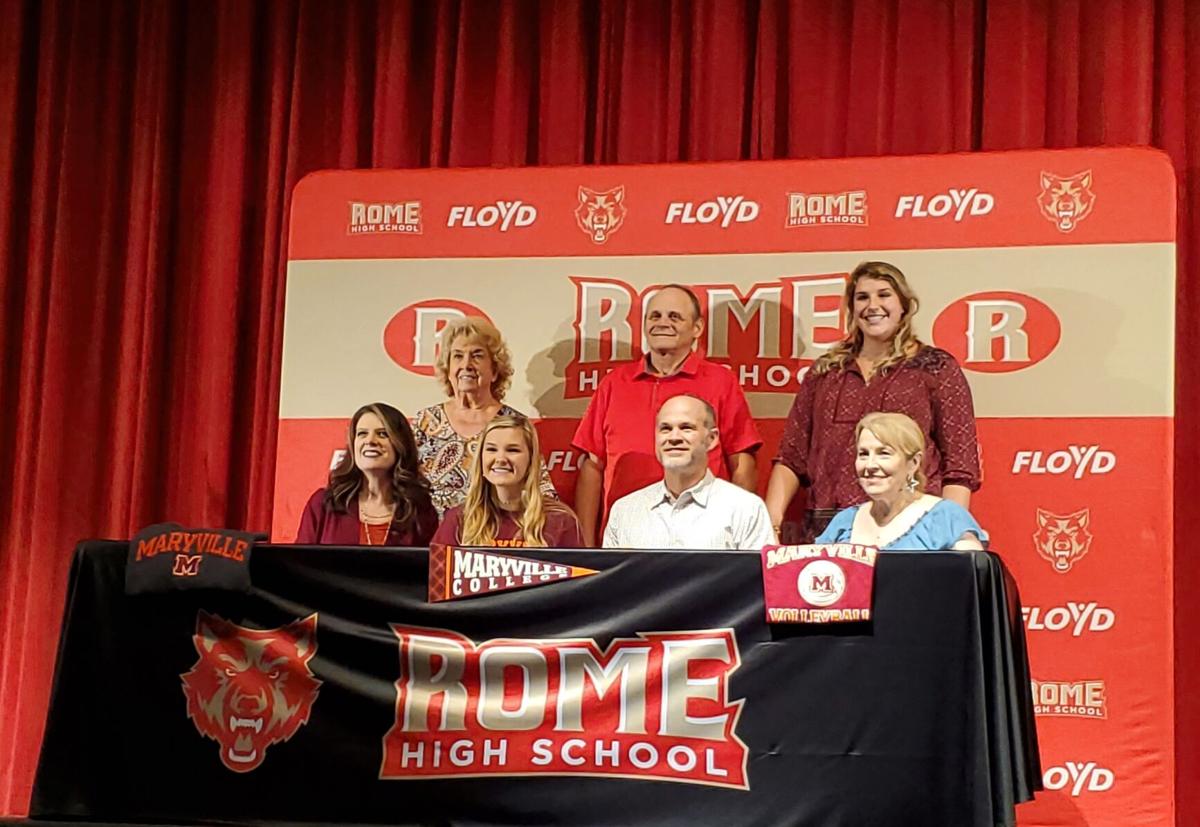 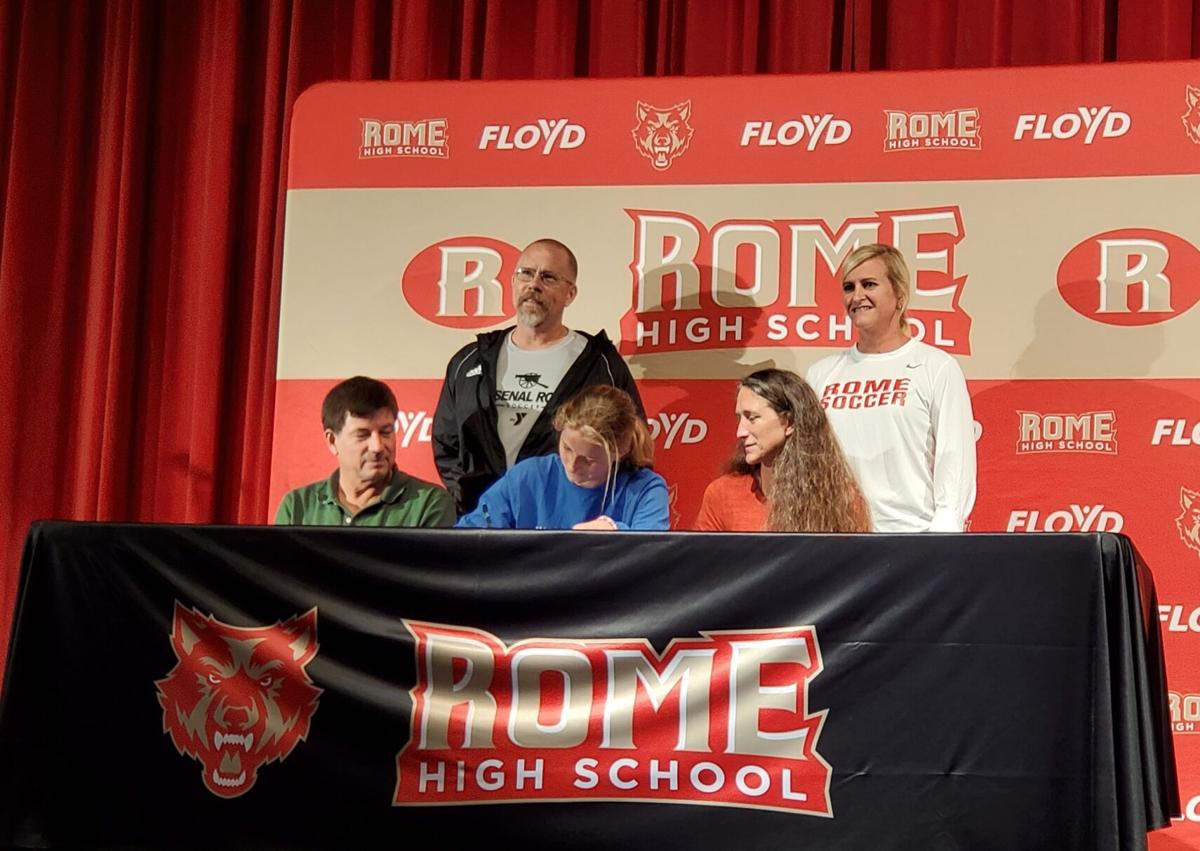 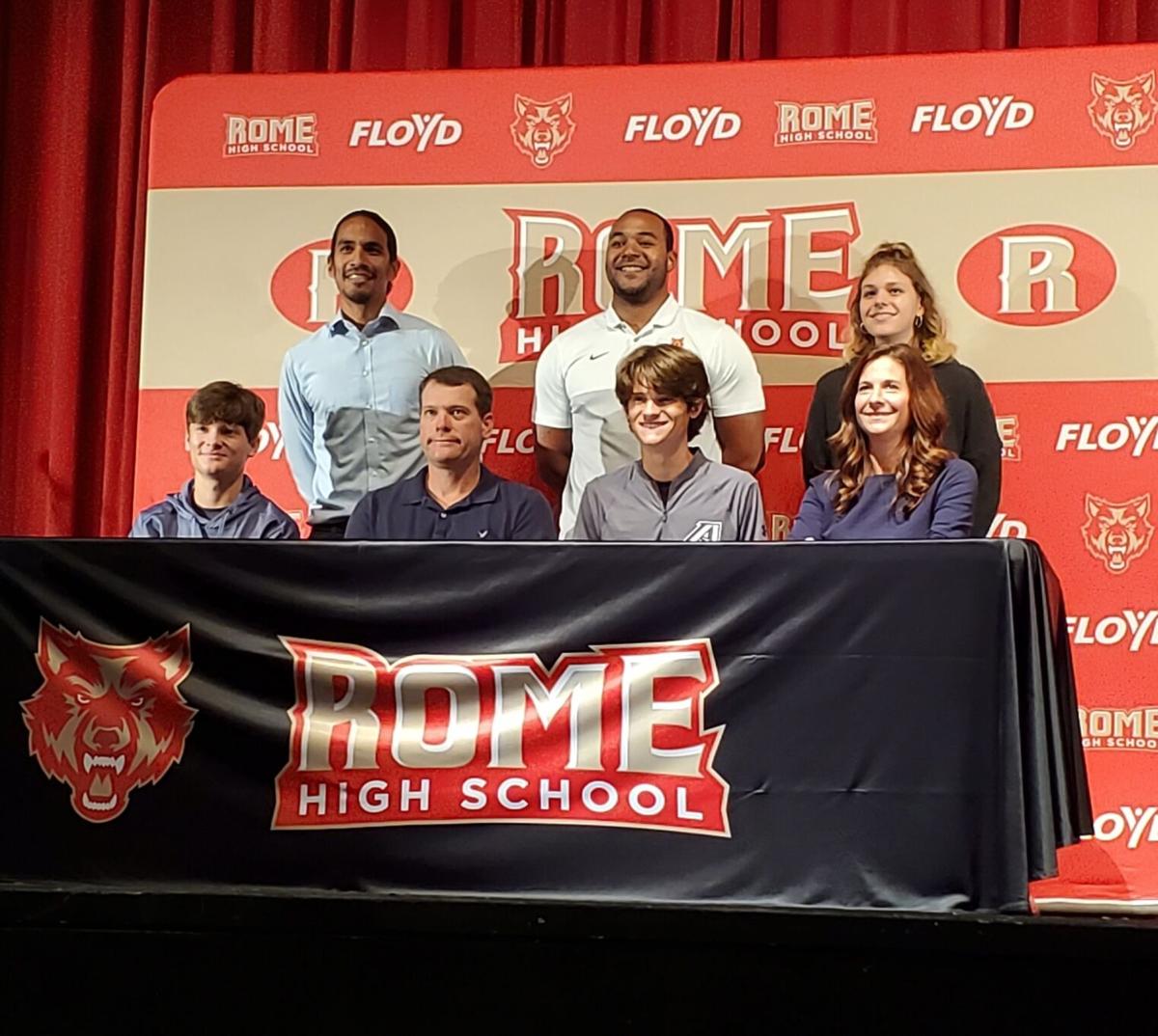 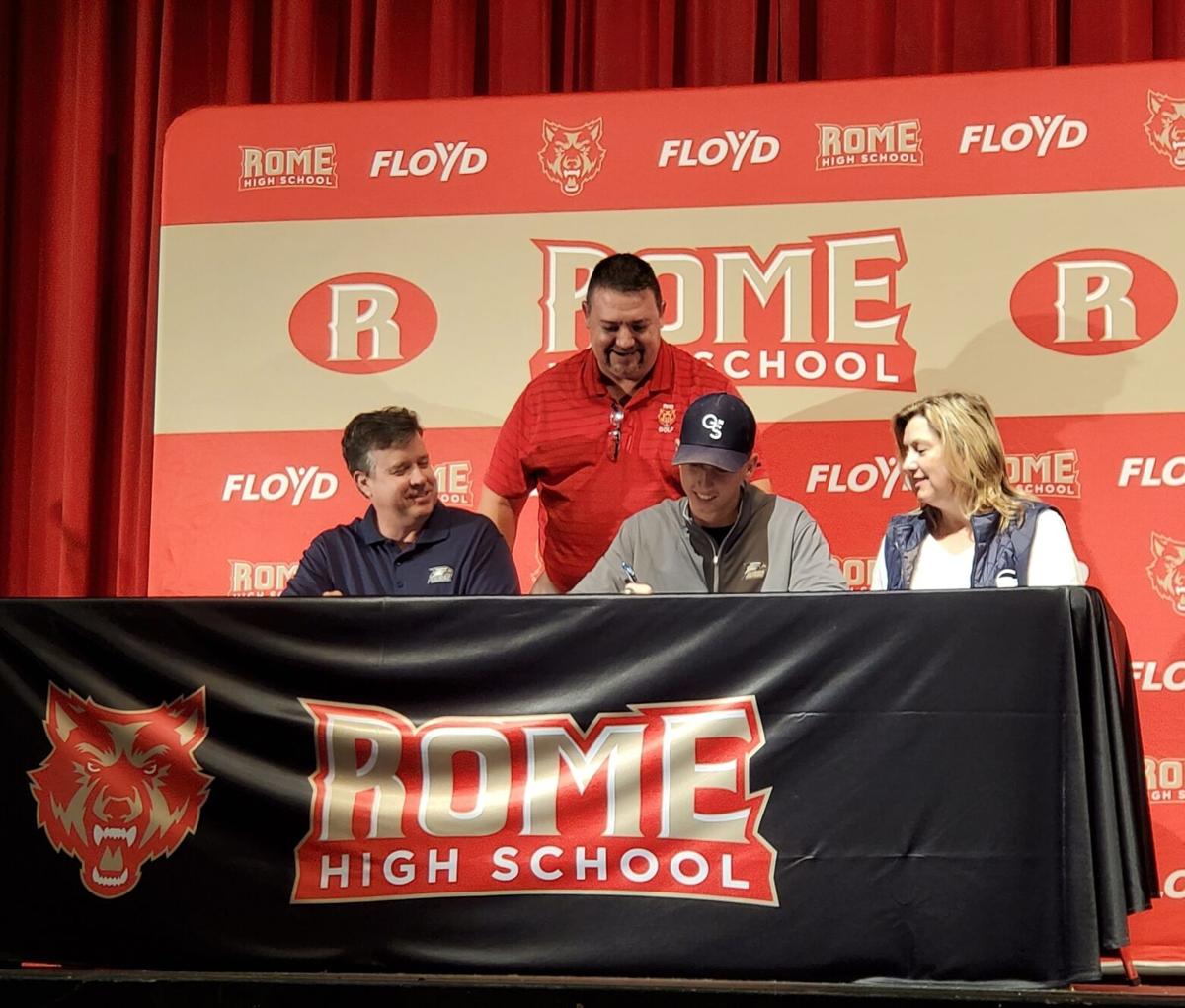 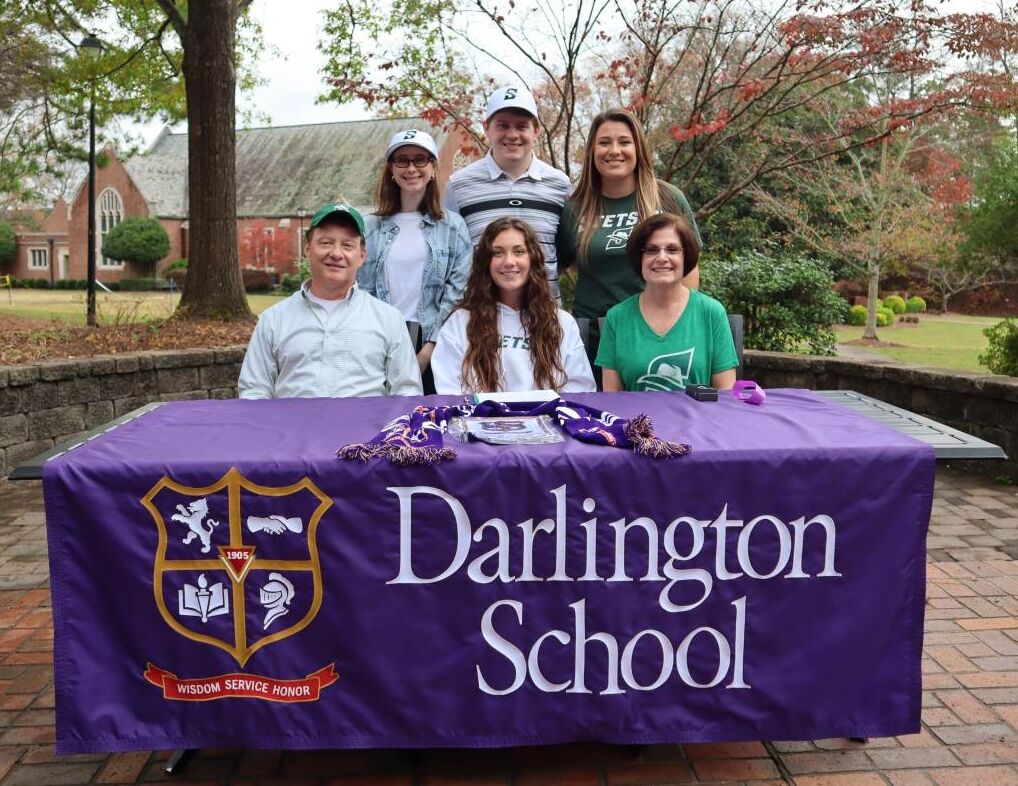 Wednesday saw high school seniors realize their dreams and sign athletic scholarships to continue their academic and athletic pursuits on the collegiate level.

The long hours, early practices, late practices, victories, defeats and everything in between all culminated in ceremonies to celebrate and pay recognition to their accomplishments.

Rome High School and Darlington School hosted celebrations of a combined five seniors in four different sports firmly committing to their next step beyond high school.

Rome High School honored four of its own, starting with Abby Payne, who will be continuing her volleyball career at Maryville College in Tennessee.

“I was hoping for this day ever since I started volleyball in sixth grade, but this is just a new milestone for me and I’m beyond excited to be able to say that I have worked this hard the last couple years to earn this and I am so blessed to have coaches like Katie (Price) and Coach Parker,” Payne said. “I immediately knew that Maryville was the place for me when I walked on there and the coach is one of the absolute greatest people I’ve ever met. The campus is absolutely beautiful and the culture there is exactly what I’ve always wanted.”

“I’ve never met such a servant leader who ... puts her teammates first, but she is the reason that they have made it so far,” Price said. “Abby is so positive. She’s so intense in the game, but outside the game, she wants to know you. They’re both-and players. Abby is both-and player. She’s a great volleyball player, but her character and who she is as a person is even better.”

Janet Hartman, who played for both the Rome Lady Wolves and the Darlington School’s Girls Soccer Academy team, was honored next. Hartman is set to attend college and continue her soccer career at the University of West Georgia.

“I liked how they weren’t too close, but also not too far and they also nice really nice fields,” Hartman said. “I like the coach too. I’m really excited, very happy (and) also kind of relieved of getting past the whole college stress and I can just go on (with) the rest of senior year relaxed.”

Hartman still has her senior season remaining, as she’s hopeful this coming year will be a long one.

“Win region,” Hartman said when asked about her biggest goal for senior year of soccer. “We were probably going to do it last year, but we didn’t get a chance because the season got cut.”

The third athlete to be honored was senior golfer Hogan Ingram. Hogan has quickly become one of the state’s top amateur golfers.

Ingram’s golfing put even collegiate teams on notice, as during the Chattanooga Choo Choo Invitational in late July, he took first place, beating high school and collegiate golfers, including those from the University of Tennessee, Knoxville.

Ingram signed with Georgia Southern University and will take his talents to Statesboro.

“I like the coach. Their coach is very good,” Ingram said. “I just felt like I’d fit in there great. I felt like going there would have the best chance to succeed in the future. It should be fun.”

Ingram’s head coach Kevin Davis said the Georgia Southern Eagles are getting a hard worker and someone who will put in both the time and effort to be the best he can.

Rome’s final athlete to be honored was Patrick Motes. Motes will head off to Augusta University, the No. 4-ranked cross country team in the nation in NCAA Division II.

“The team camaraderie, the coaches and ... the elite level they compete at,” Motes said. “Going into a program ranked No. 4 in the nation, that’s amazing. I just wanted to be a part of something bigger and this is going to give me the best opportunity to do that.”

Motes’ head coach, Luis Goya, said he could not be more proud and excited for his senior.

“Patrick was a huge, huge weight in the fact that we were able to win three times region championships and also qualify for state,” Goya said. “What I like about this kid is his fire, his determination. He wakes up in the morning, goes for a run, follow the plan. He is definitely going to be missed.”

At Darlington School, Hartman and Kendall Brittingham were both honored in a signing ceremony. Brittingham will be attending Stetson University on a soccer scholarship.

Trump vows to press on in Wisconsin despite recount setback