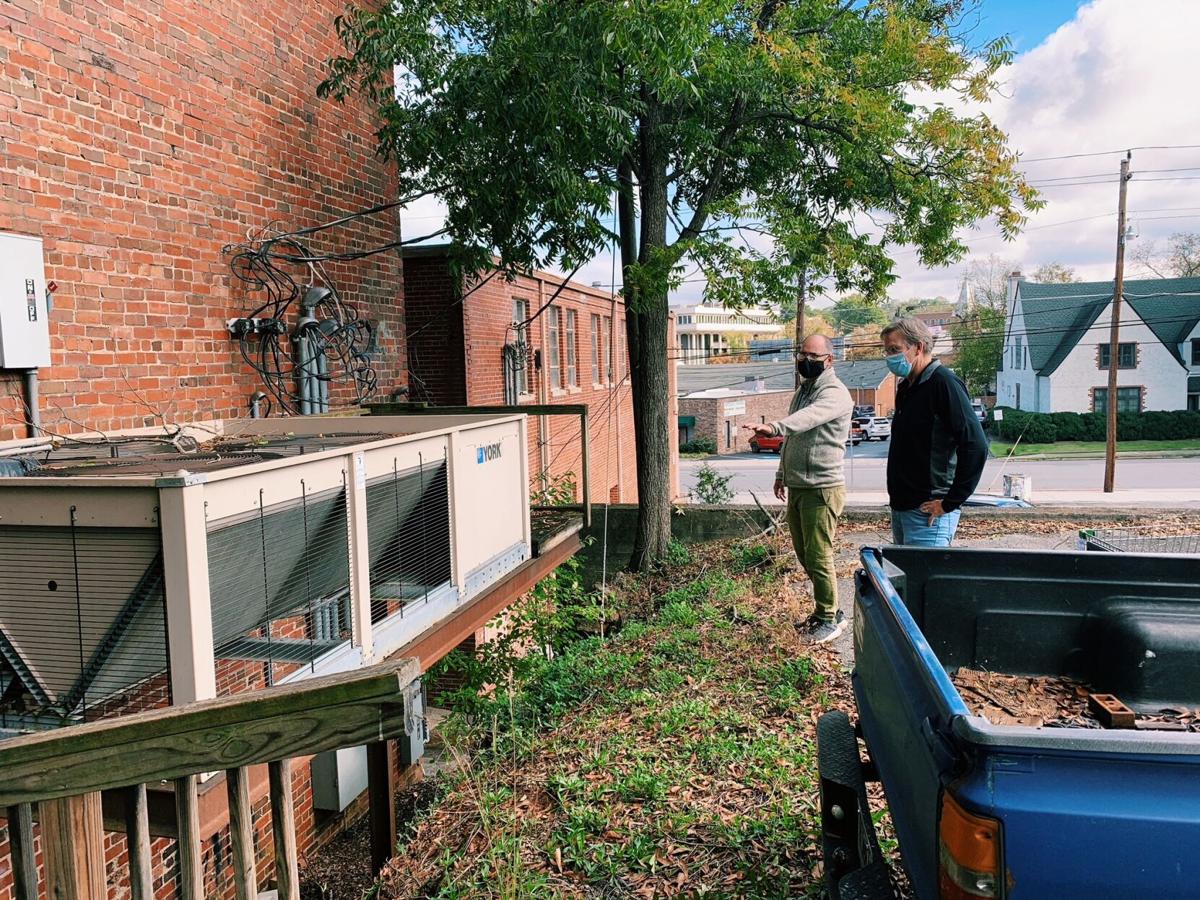 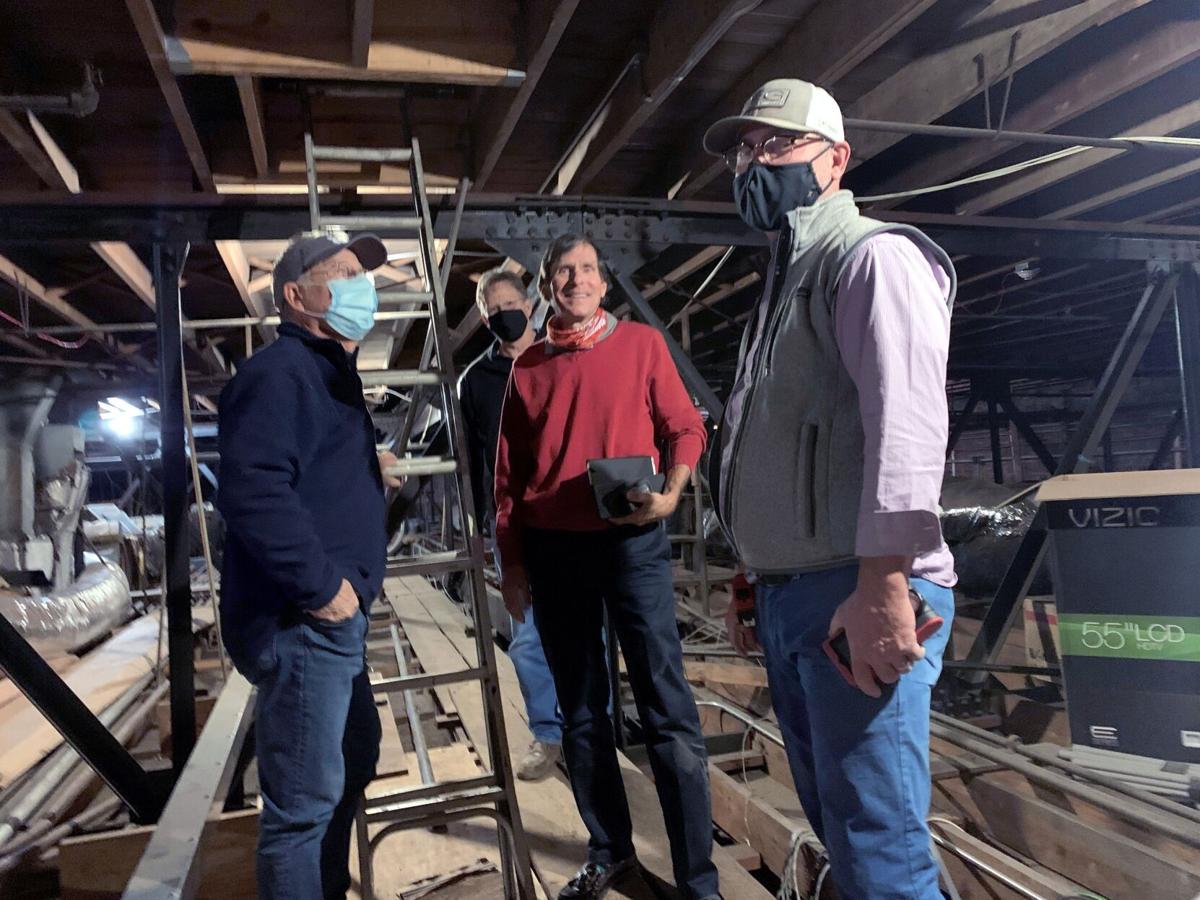 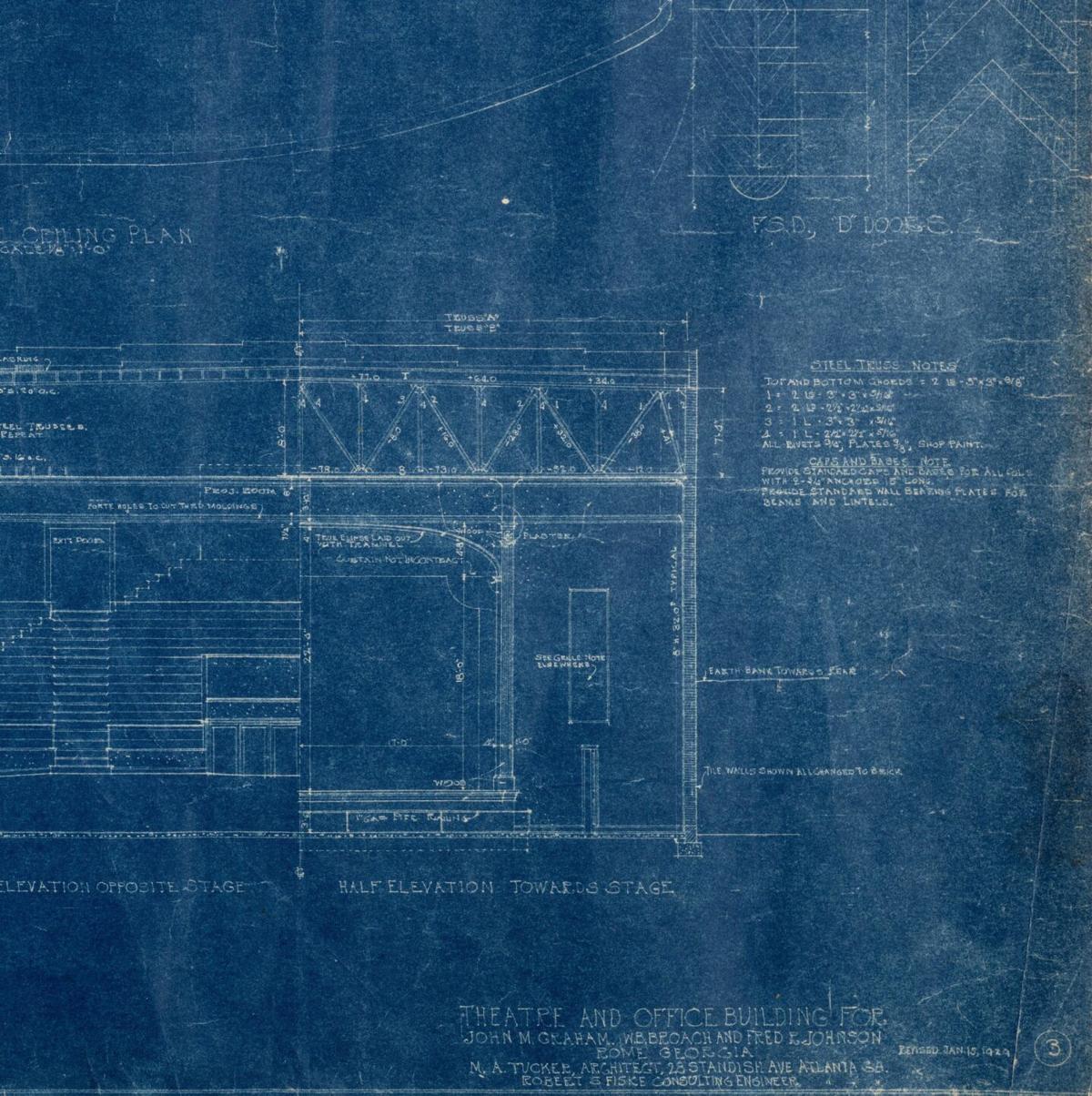 The original building blueprints from 1929 were available, and they were used to help evaluate the roof’s structure and capacity to support the two 3,000-pound rooftop units.

The original building blueprints from 1929 were available, and they were used to help evaluate the roof’s structure and capacity to support the two 3,000-pound rooftop units.

The sign was a false alarm. The brightly lit DeSoto marquee read PERMANENTLY CLOSED, but the words floated up on Broad Street only for 20 minutes.

In that short while, texts from friends and social media posts worried about the DeSoto quickly gave way to messages of relief and of unconditional support. Ironically, the sign lamenting the demise of yet another historic theatre was part of Hollywood magic, a day of filming that brought in welcome rental income. Instead of closing, help from the community is opening up a new world of possibilities for the DeSoto. This month, a 70-ton crane over the DeSoto will help kick off its most costly renovation project since 2013.

In spite of an extremely challenging year, the Historic DeSoto Theatre Foundation is able to claim several 2020 victories. One of these, said outgoing HDTF president David Clonts, is the $75,000 grant award from Georgia Council for the Arts Cultural Facilities Grant for new heat and air units. Earlier victories were a generous donation for re-creating the 1940’s Art Deco banquette in the lounge, and a grant to bring back neon lighting to the theater’s front areas.

Within the next several weeks, the foundation will install two brand-new, 3,000-pound, energy efficient HVAC units to heat and cool the DeSoto’s 500-seat auditorium, says Clonts. A 70-ton crane will haul the new units to the roof of the building, and it will haul away the massive, old, and inefficient units that have been at the theatre for decades.

“This will be quite a sight,” Clonts said. “We hope that people come out and bring their kids to see the crane at work. This is a turning point for the DeSoto.”

For years, the old units have been draining the DeSoto’s limited resources with maintenance, repair, and high utilities bills because of old age and energy inefficiency. The new units should free up a considerable amount of operations money that can now be used elsewhere.

“Until now, we’ve had to keep the units going at whatever cost, because we couldn’t afford to replace them,” said Jim Powell, incoming HDTF president. There were other critical needs that had to take precedence, such an overhaul of the electrical system, safety upgrades, roof repairs, a new projector and screen, and additional expenses needed to keep the theatre in operation.

“The community has funded most of our renovation projects through the years,” Powell said, “and although we have huge outside help this time with the $75,000 from the Georgia Council for the Arts grant, we need the community to step up with $40,000 in matching funds to complete this project. Because we have no events going on, the best way to help is with donations to the Annual Fund.”

When the pandemic forced the DeSoto to close its doors in March, the Foundation successfully pivoted to grant writing, and to fundraising for specific projects.

“We were super excited to win the $75,000 GCA grant to replace and relocate the HVAC units,” said Michelle Picon, HDTF Development Director.

“Our Annual Fund last year had a record year, thanks in part to our 90th Anniversary celebration,” Picon said. “Had we not had that money in the bank, we wouldn’t have been eligible for the grant at all. We had to show our bank statements. We had to prove that we can fundraise successfully to complete projects. That’s why not having events is now hurting us, and why generous donations from the community are crucial.”

Picon said that the HVAC project fits perfectly with GCA’s plan to help improve cultural facilities throughout the state of Georgia, because it has been proven that cultural facilities such as downtown historic theatres can be economic engines for cities and towns. But having brand-new heat and air units is especially important this year both to the DeSoto and to GCA. In the face of the Covid-19 pandemic, facilities are retrofitting their heat and air units in order to provide more efficient air filtration and ventilation to help mitigate the spread of the virus.

The project’s total cost of $115,000 includes the units themselves, roof preparation and reinforcement, electrical work, crane rental, and demolition and hauling off of old units and other abandoned units. The lowest bidder, North Georgia Equipment Co., was contracted to do the work. Atlanta’s Willett Engineering Company was hired to evaluate the existing roof framing, determining that the roof is able to support the added weight of the two units.

Replacing and relocating the HVAC units to the roof will open up space in the back of the theatre and inside the building, and this in turn will help with potential stage and backstage renovations in the future, said Clonts, who is a local builder and will help supervise the project. Stage renovations are part of the DeSoto’s long-term plans.

Picon said the brand new HVAC systems will give peace of mind to the HDTF as well as to patrons.

“We can’t wait to have the DeSoto at full capacity for Rome Little Theatre plays, Seven Hills Fellowship services, benefit concerts, and private rentals,” she said. “Once the pandemic subsides, the community will be eager for entertainment, and the healing power of the arts will be more important than ever. We want to be ready for that moment, safely.”

Picon said there’s a sense of pride knowing that the community will never let that PERMANENTLY CLOSED sign stay at the DeSoto marquee for longer than a Hollywood moment. Powell agreed. He’s the one who put the letters up for the filming, and he admits that doing so did not give him a good feeling.

“People were so excited to see the Art Deco bench and the neon lights in social media posts and newspaper articles this fall,” Powell said. “It sent the message that the DeSoto and hopefully many other groups will make it through these difficult times. People want to help.”

The eternal optimist, Clonts trusts that excitement surrounding the renovations of the DeSoto will continue.

“PERMANENTLY OPEN is the sign that I want to see there,” he said.

The DeSoto Theatre was constructed in 1929 as the South’s first theatre for sound motion pictures. In 1982 the theatre closed for movies but reopened as the city’s premier stage for local amateur plays and performances as the home of Rome Little Theatre. Established in 2008, the Historic DeSoto Theatre Foundation has overseen improvements in the building such as the renovation of the theatre’s entry vestibule and façade, new lounges and marble bathrooms, a renovated auditorium with new carpet and historically-accurate seating, a new concessions area, custom-made sound panels, electrical modernization, and enhanced safety systems. Additional capital improvements planned include renovation of the stage and backstage area, technical upgrades, and continued improvements to period-themed lounges and event spaces, as well as the day to day care and maintenance that a historic building deserves.

Donations to the 2020-2021 Annual Fund may be made at www.thedesoto.org or by check to: HDTF, 530 Broad Street, Rome GA. All donations will benefit the Historic DeSoto Theatre Foundation for the continued preservation and restoration of the “Jewel of Broad Street.”