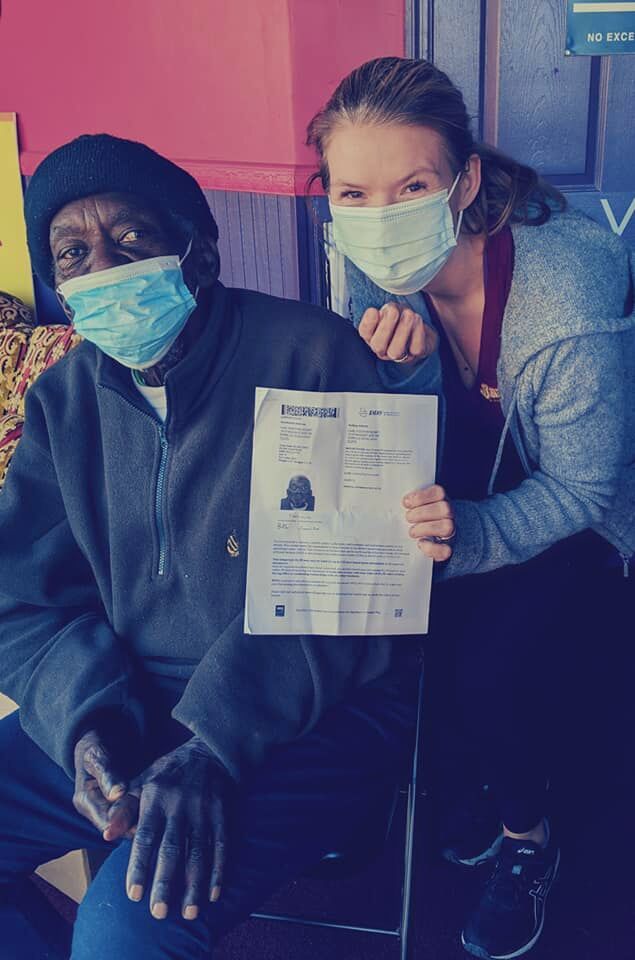 Carl Booth, 83, is hoping to regain some indepenence and is seeking family members that may be in the area. His mother’s name was Lillie Nesbith and his father was Marvin Jones. 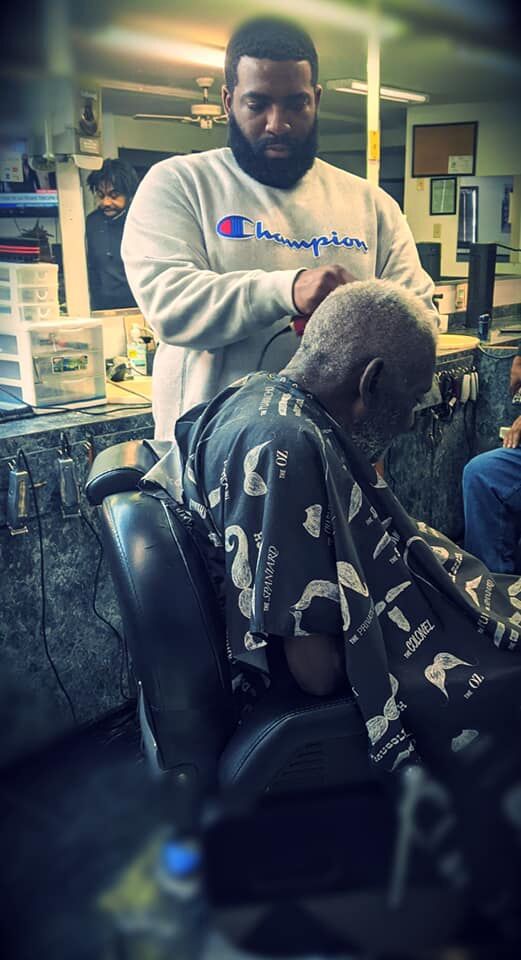 Even simple things such as a shave and haircut are a big deal to a man who is used to being homeless. But thanks to Yancey’s intervention, Mr. Carl is on the way toward self reliance. 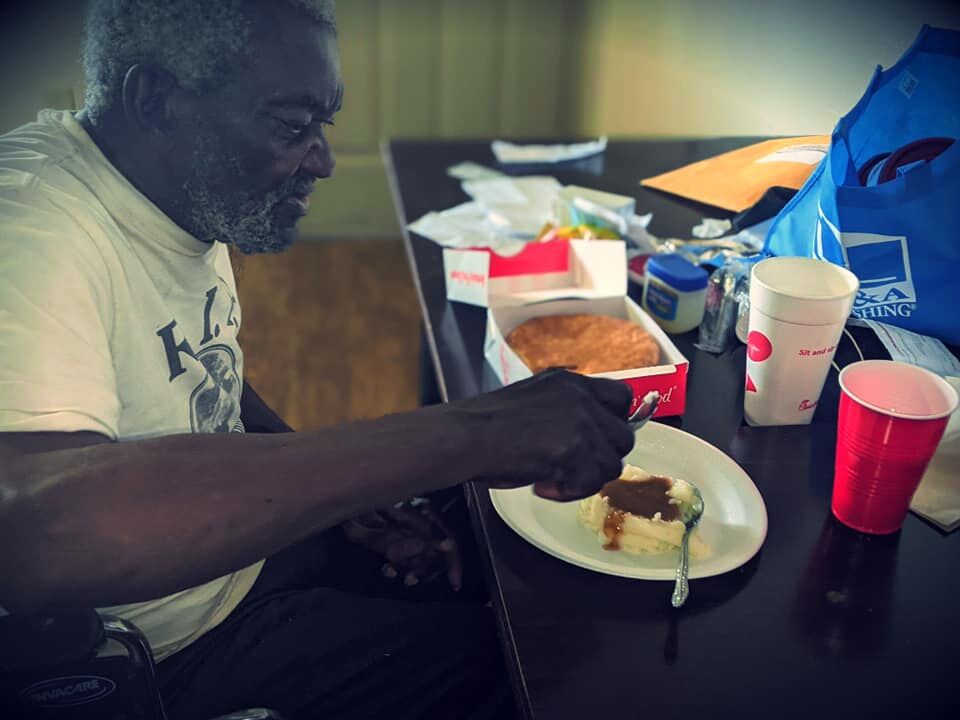 Yancey drives Mr. Carl anywhere he needs to go and makes sure he has food and all other necessities. But she’s hoping the community can donate funds for his housing, medical care and even funeral expenses.

Carl Booth, 83, is hoping to regain some indepenence and is seeking family members that may be in the area. His mother’s name was Lillie Nesbith and his father was Marvin Jones.

Even simple things such as a shave and haircut are a big deal to a man who is used to being homeless. But thanks to Yancey’s intervention, Mr. Carl is on the way toward self reliance.

Yancey drives Mr. Carl anywhere he needs to go and makes sure he has food and all other necessities. But she’s hoping the community can donate funds for his housing, medical care and even funeral expenses.

Shadae Yancey is trying to help her friend 83-year-old Carl Booth put his life together.

She hopes the Rome community is willing to help her do that.

Yancey and Mr. Carl, as everyone calls him, met in 2013 when she first opened Jamwich on Broad Street. He was pushing a buggy of aluminum cans at the time.

And he was homeless, sleeping near the river and collecting cans for money.

“Throughout the years I have helped him with certain tasks to make his homeless life a little easier,” Yancey said. “He is about to turn 84 years old and the winters are getting harder and harder for him.”

In the months following their first meeting and blossoming friendship, Yancey helped Mr. Carl get knee braces and fed him at her restaurant. He trusted her enough with what little personal documents he had. And after he was beaten and robbed of $2, he trusted her with what little money he had as well.

He was fiercely independent, however, and still chose to live by the riverbank. One day a couple years ago, Yancey went looking for him and found him there on a very cold morning.

“I thought he was dead,” she said. “He was frozen. I called 911 and an ambulance took him to the hospital.”

But because she wasn’t a family member and had no rights to Mr. Carl’s information, the hospital refused to give her any information on his condition or his whereabouts when he was eventually released.

But then she saw him one day recently and he was in a wheelchair. They sat and talked for a long time. And Yancey has decided that she wants to help Mr. Carl put his life together. But she needs help.

Yancey has already taken him to renew is ID and obtain a copy of his birth certificate. Mr. Carl was born in Columbus, Ohio in 1937. He and his mother left the state in a boxcar train when he was less than two years old. They arrived in Georgia to be cotton pickers with the hopes of a better life in Fairmount.

“During that time his named changed without an amendment being filed,

Yancey posted to social media. “This is my next daunting task: filing the amendment to change his name from Nesbitt to Booth, the name he’s gone by his entire life.”

According to Yancey, without documents that match, he can’t open a checking account to deposit social security checks.

She’s also trying to find him permanent shelter, medical care and other things he needs. She drives him anywhere he wants to go. His mobility is limited so it’s not an easy task getting him anywhere.

“He needs shelter and he needs to be safe,” she said.

At the moment, Mr. Carl is staying at a hotel thanks to donations from community members.

But Yancey is working with United Way to secure a place for him to stay until he can find a permanent place to live. She’s trying to set him up to be as independent as possible for someone his age.

The staff at Jamwich prepare meals for Mr. Carl and Yancey is constantly making phone calls to form partnerships that will get Mr. Carl the medical attention, care and food that he needs.

“At 83 it’s like we’re launching an 18-year-old out into the world,” she said referring to the difficulty of starting out with almost nothing.

Yancy uses social media to keep the community updated on their progress.

And there has been progress. The going is slow, but they’re seeing positive results.

One of the issues important to Mr. Carl is to find family members. He believes he may have brothers in the Collared Valley area in Polk County. His mother’s name was Lillie Nesbith and his father was Marvin Jones who Mr. Carl said may have been married two or three times.

He would desperately like a photograph of his mother.

And he’s concerned about his final expenses.

“My health isn’t so good and I don’t want to be cremated,” Mr. Carl said.

And so Yancey has also taken it upon herself to make sure his wishes are followed.

“We’re getting him peace of mind,” she said. “We went to F.K. Jones Funeral Home to start the process and we went to see about his burial plot. We had a good conversation with those folks and we can definitely make sure Mr. Carl is taken care of.”

She recently took him to the barber to get shaved and to get a haircut. So Mr. Carl is looking and feeling good.

But it takes a village, as they say. And Yancey hopes the community can help with donations that will go toward Mr. Carl’s housing, food, medical care and his final expenses.

Donations can be made in person at Jamwich or by sending a check to Jamwich, 510 Broad Street, Rome Ga. 30161 (making sure to note on the check “Donation to Carl Booth”). And if the donations are specifically toward Mr. Carl’s funeral expenses, that should be noted on the check as well.

“And he loves KFC,” Yancey said. “So if anyone wants to drop KFC gift cards, Mr. Carl sure would appreciate them.”

Carl Booth may not be in the best of circumstances, but thanks to Shadae Yancey and a giving Rome community, his luck is turning around.

Britons rush to book holidays amid plans to end lockdown

Marietta man dies in I-75 crash

Sheriff and GBI investigating shooting death on Self Lake Road