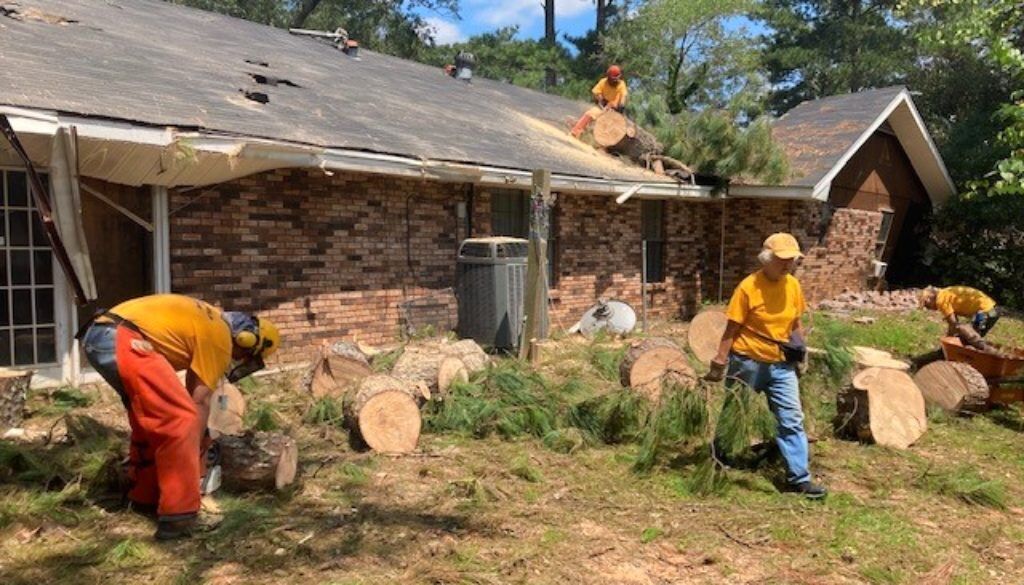 Georgia Baptist Disaster Relief volunteers work to remove a tree topped by Hurricane Ida from a home in Kentwood, La. 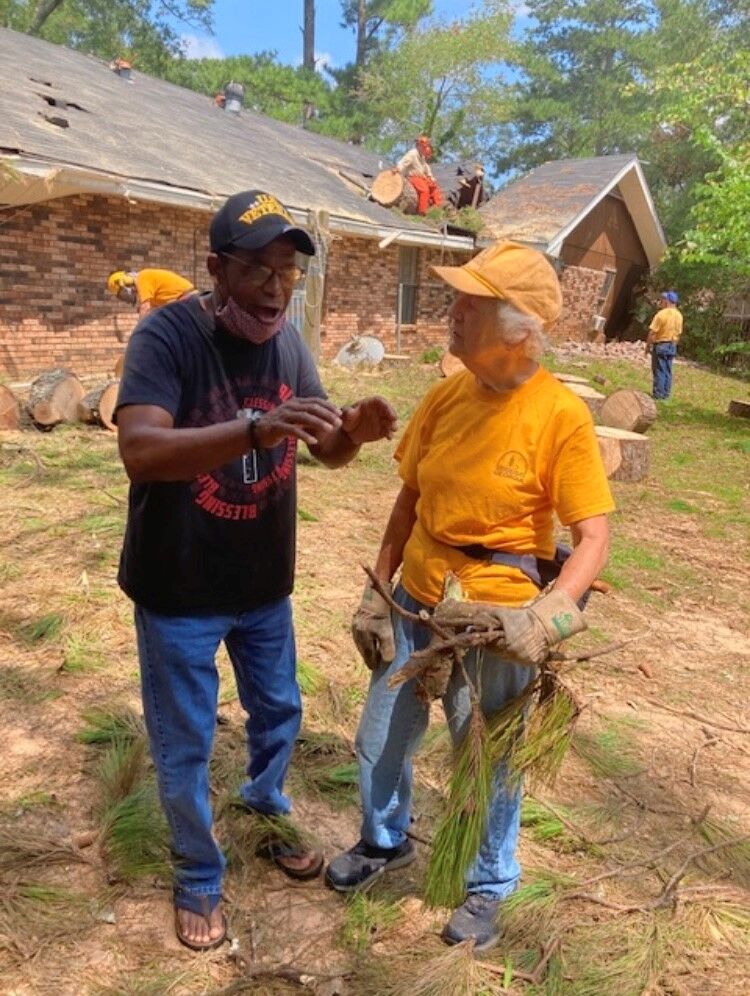 Nancy Hubbard of Fayetteville, Ga., right, chats with Arzo Grayson Jr. whose home was damaged by a tree toppled by Hurricane Ida in Kentwood, La. 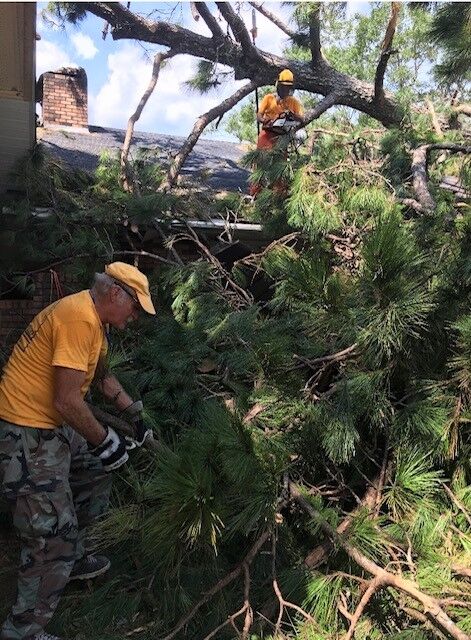 Crews work to remove a massive tree from a home in Kentwood, La.

Georgia Baptist Disaster Relief volunteers work to remove a tree topped by Hurricane Ida from a home in Kentwood, La.

Nancy Hubbard of Fayetteville, Ga., right, chats with Arzo Grayson Jr. whose home was damaged by a tree toppled by Hurricane Ida in Kentwood, La.

Crews work to remove a massive tree from a home in Kentwood, La.

KENTWOOD, La. – Arzo Grayson Jr. didn’t know what he was going to do about the massive pine tree that had crashed through his roof, huge limbs protruding into his bedroom and living room, courtesy of Hurricane Ida.

The 66-year-old Army veteran had narrowly escaped being crushed. His house wasn’t so fortunate.

“I was heartbroken,” Grayson said. “I was sitting out in the yard, and a guy pulled up and said he’d remove that tree for $6,500. I said, ‘no thanks, I’m praying about it.’ After a while, another guy showed up. He had patches all over his shirt. He looked like some kind of Boy Scout. He said, ‘we can remove that tree for you, and it won’t cost you anything.’”

Grayson swallows hard, then continues, “There’s no doubt in my mind; that man came in answer to prayer.”

What Grayson thought looked like a Boy Scout uniform was the unmistakable attire of a Georgia Baptist Disaster Relief volunteer. These folks always rush into disaster areas like Kentwood, doing what’s necessary to get victims back on their feet.

Grayson had never heard of the Southern Baptist Convention’s Disaster Relief initiative before the volunteers began showing up. They prayed with him. They offered encouragement. And they sawed the enormous tree into small pieces and carried them away.

Over the Labor Day weekend, while most Americans enjoyed leisurely time away from work, Disaster Relief volunteer Jeff Carter and his team were hard at work in 90-plus degree temperatures. An unrelenting Louisiana sun and high humidity make it feel much hotter.

“The heat is rough,” said Carter, wearing the blue hat identifying him as team leader. “But it’s rewarding work, and that keeps us going.”

Georgia has more than 7,000 Disaster Relief volunteers trained and ready to help people like Grayson. When mobilized, they rush to disaster areas, leaving behind their own families for the sake of others. Their only pay is the good feeling they get from helping their fellow man. It’s not hard to see there’s something different about these people. It’s apparent in the smiles they wear. Joy shines in their eyes. And, in their first week in the small town of Kentwood, 11 people who recognized that there was something different about the Georgia Baptists opted to follow Christ themselves.

Chris Fuller, a member of Highland Hills Baptist Church in Macon, Ga. isn’t just drinking lots of water; he’s pouring it over his head to try to cool himself. He’s soaked in sweat and covered in sawdust. His face is reddened. But he keeps on working.

As Hurricane Ida blew into Louisiana, Grayson was sheltering in place. Rain pelted his roof, his walls, his windows. Trees swayed in winds up to 150 mph. He had walked out of his bedroom about 9:30 p.m. last Sunday when the roots of an 85-foot-tall pine lost their grip in the soggy ground. The weight of the trunk crashed through his roof, his trusses, his ceiling, sending sheetrock all directions. He felt one of those sheets slap him across the back.

“The Lord was with me,” he said. “I would have been crushed if I hadn’t walked out of that room when I did. He has blessed me, and He’s continuing to bless me.”

Grayson points in the direction of the Disaster Relief team, some on his rooftop with chainsaws carving up at the massive trunk, some below carrying tree branches away, and he says, “See that? God has truly blessed me.”

Southern Baptist Disaster Relief teams like this one have been deployed all along the path of Hurricane Ida, not just along the Gulf Coast but also on the East Coast where heavy rain from the storm spawned flooding that killed at least 46 people, many of whom drowned in their homes and cars.

At 82, Nancy Hubbard, a member of Fayetteville First Baptist Church, has sweat dripping even from her earlobes as she carried away portions of Grayson’s tree. Her snowy white hair is wet beneath her yellow cap. But she continues her duties.

Hubbard’s first Disaster Relief deployment was 20 years ago to New York City after the 9/11 attacks. She has been among the first to step forward as a volunteer ever since.

‘Big Sky’ Season 2 Trailer Teases a New Mystery, Plus Is Ronald in Over His Head? (VIDEO)