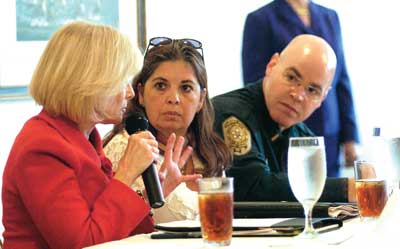 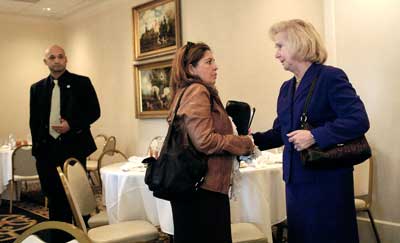 What was supposed to be an informative discussion about immigration turned heated Tuesday in Rome.

Things took an awkward turn when panel moderator Sandra McCain had to ask one audience member to be respectful of those on the panel.

Jerry Gonzalez, executive director of Georgia Association of Latino Elected Officials, had originally been asked to be a part of the panel, before being “uninvited.”

“I find that extremely rude,” Gonzalez said from his table during the lunch meeting at Coosa Country Club.

McCain said after inviting Gonzalez, the SHRM thought a three-person panel would be more beneficial to the discussion.

The panel was largely focused on employment issues surrounding the immigration law, such as the E-verify system now required for all businesses with more than 10 employees. The program is used to verify a potential employees immigration status.

“Our nation is a nation of laws. They should be acted on equally,” said Dempsey.

She emphasized that the system is intended to be used for new hires, not those already employed with an organization.

Gonzalez, who began yelling at Dempsey when the meeting ended, was escorted from Coosa Country Club.

One attendee shouted: “Katie Dempsey is a great American hero.”

Langlois, a naturalized U.S. citizen who disagrees with much of the immigration law, voiced her concerns that the law targets those of one specific race.

Langlois was cut off five times by McCain as she tried to answer questions.

McCain said she did feel Langlois’ opinion was adequately heard.

“We were trying to say focused,” McCain said. “This is basically an employment group, a human resources management group. We wanted to stay focused on the issues that were most relevant to these specific employers.”

ATLANTA — Georgia Agriculture Commissioner Gary Black is telling University of Georgia football icon Herschel Walker to put up or shut up in next year’s Republican race for the U.S. Senate.

Should you save in equity to buy a car in the short run?

Fungus diseases can be a blight on fruit trees