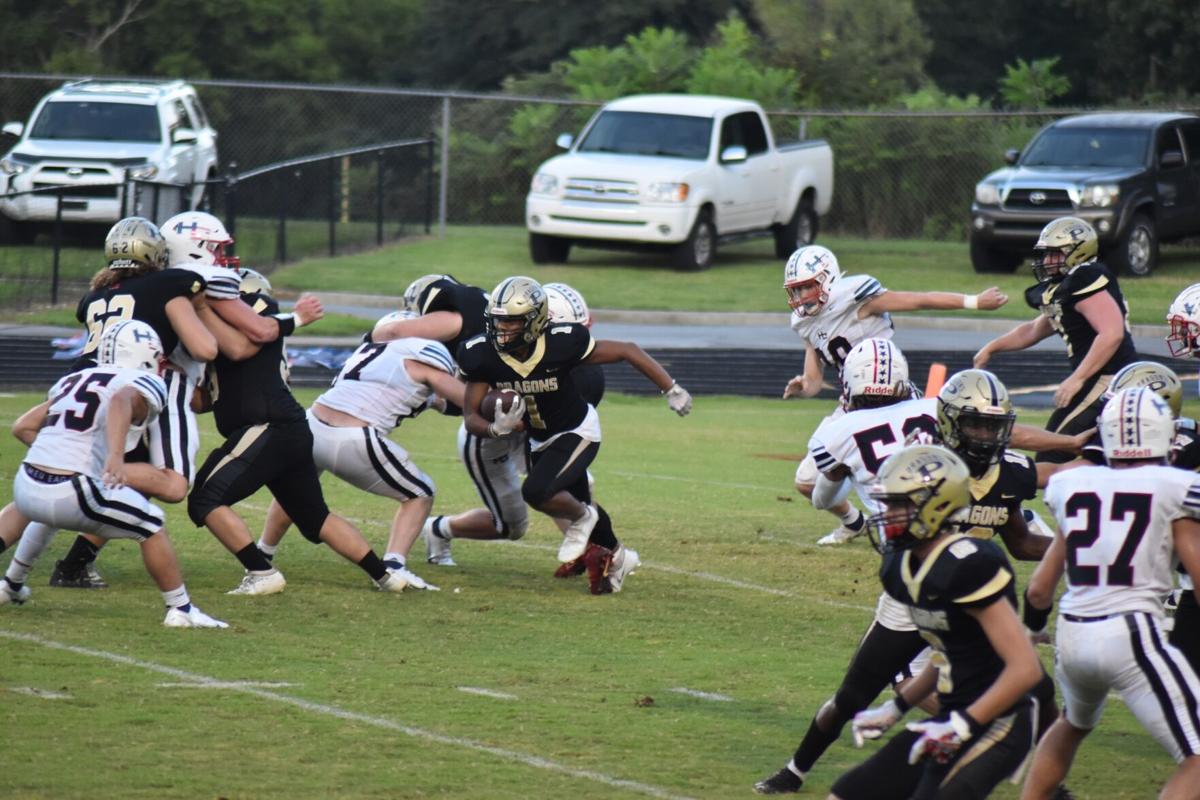 Pepperell junior running back DJ Rogers runs with the football during the Dragons' season opener against the Haralson County Rebels on Friday, Aug. 20, in Lindale. 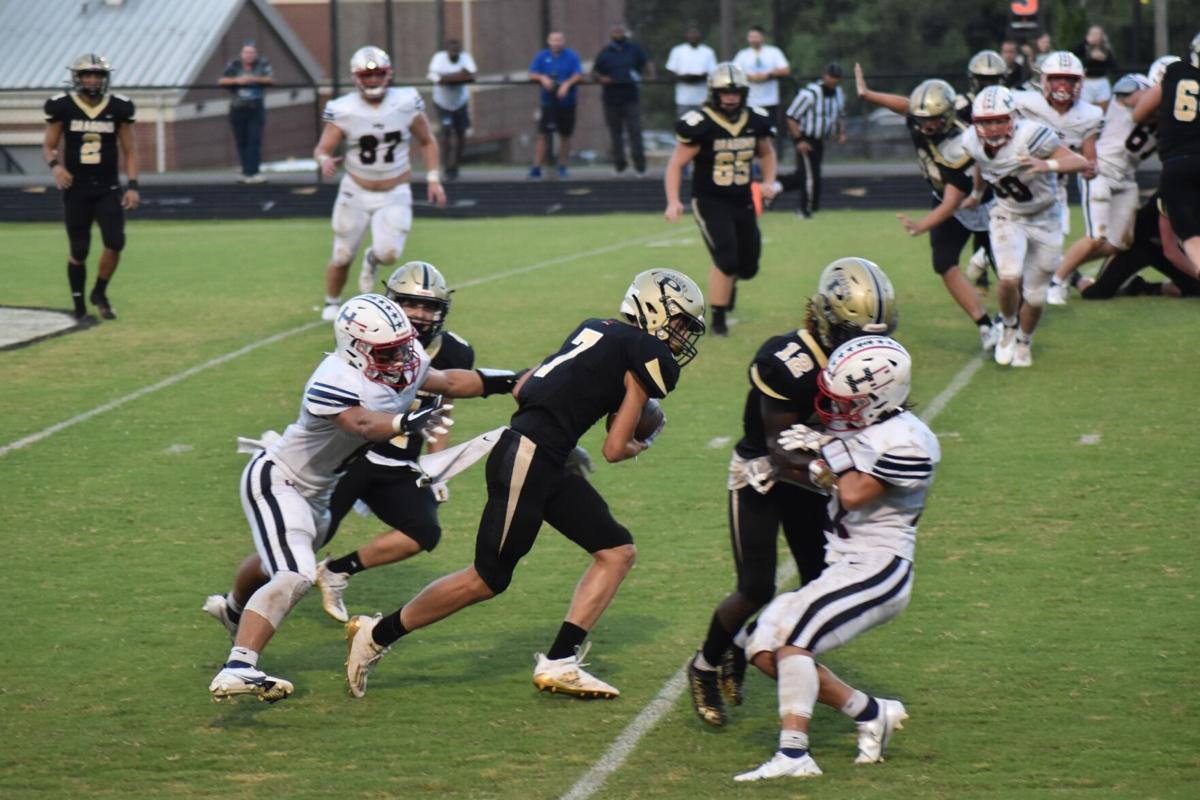 Pepperell junior Alex Rhoades makes a catch against the Haralson County Rebels during the Dragons' season opener in Lindale on Friday, Aug. 20. 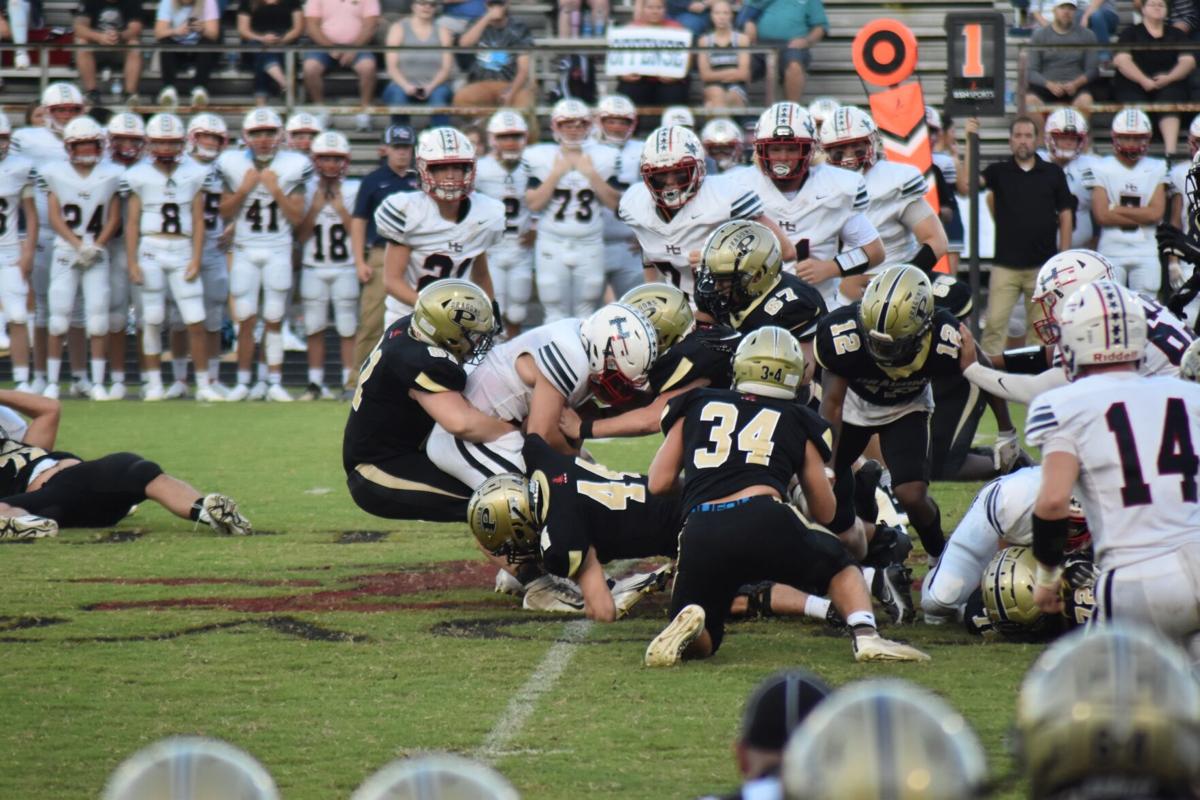 A host of Dragons make a defensive stop during Pepperell's season opener against the Haralson County Rebels in Lindale on Friday, Aug. 20.

Pepperell junior running back DJ Rogers runs with the football during the Dragons' season opener against the Haralson County Rebels on Friday, Aug. 20, in Lindale.

Pepperell junior Alex Rhoades makes a catch against the Haralson County Rebels during the Dragons' season opener in Lindale on Friday, Aug. 20.

A host of Dragons make a defensive stop during Pepperell's season opener against the Haralson County Rebels in Lindale on Friday, Aug. 20.

The Pepperell Dragons could not solve the Haralson County puzzle to kick off 2021 as the Rebels pulled away from the host Dragons 43-24 Friday at Dragon Stadium in Lindale. Pepperell starts the season 0-1 for the fifth year in a row.

“(Haralson County) did exactly what we thought they were going to do,” Dragons head coach Rick Hurst said. “At times we showed our toughness, at times we didn’t.”

“I think we just got tired,” Hurst said. “We got physically beat up at times, and then we didn’t respond very well. They found some weaknesses from us and exploited it.”

Perhaps the biggest play and turning point of the game came at the end of the first half.

With Pepperell trailing 21-14 on the Haralson County 1 with 0.8 to play before halftime, the Dragons elected to go for the tie pending a successful PAT. Instead, quarterback Matthew Waddell was tackled behind the line as the Rebel defense came up with the goal-line stand.

“Totally my call,” Hurst said of the decision. “I thought after the timeout (Haralson County) took, I knew they were thinking we were going to sneak it again, so they packed everything inside so we thought we would run a counter play or power play and they played it well. That was tough. Hindsight is 20/20 if I had to do it all over again I’d do the exact same thing.”

Pepperell could not have asked for a much better start, as a muffed opening kickoff return by Haralson County gave the Dragons the ball on the Rebel 15-yard line. One play later, junior running back DJ Rogers cruised into the end zone for his first touchdown of the year. A mere 12 seconds in, it was 7-0 Dragons.

After a defensive hold by Pepperell, the Dragons took over at their own 19-yard line and on his second touch of 2021, Rogers turned on the jets 81 yards to the house to put the home side up 14-0 less than halfway through the first quarter.

Rogers would finish with 155 yards rushing and accounted for all three Pepperell touchdowns, his final TD being a 21-yard catch from quarterback Matthew Waddell in the third quarter.

”I thought he played well,” Hurst said. “That catch in the end zone was something we’ve talked about him over the last couple of years becoming a full player.”

But Haralson County’s resiliency paid off, outscoring Pepperell 21-0 to close the first half with the lead, setting the tone for the remainder of the night.

Pepperell will travel to Heard County (1-0) next Friday, with kickoff slated for 7:30 p.m.