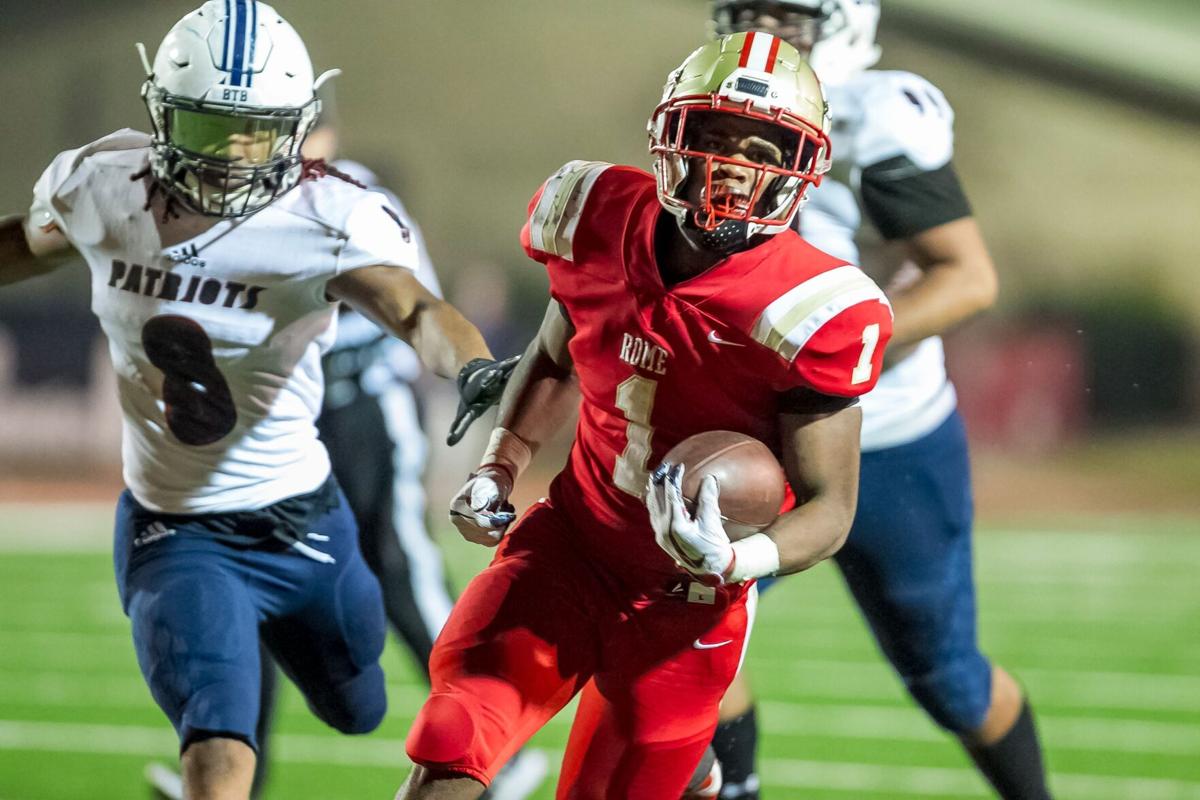 Rome senior running back EJ Lackey carries the football against the Paulding County Patriots at Barron Stadium last Friday. The Wolves will face Habersham Central in the first round of the playoffs. 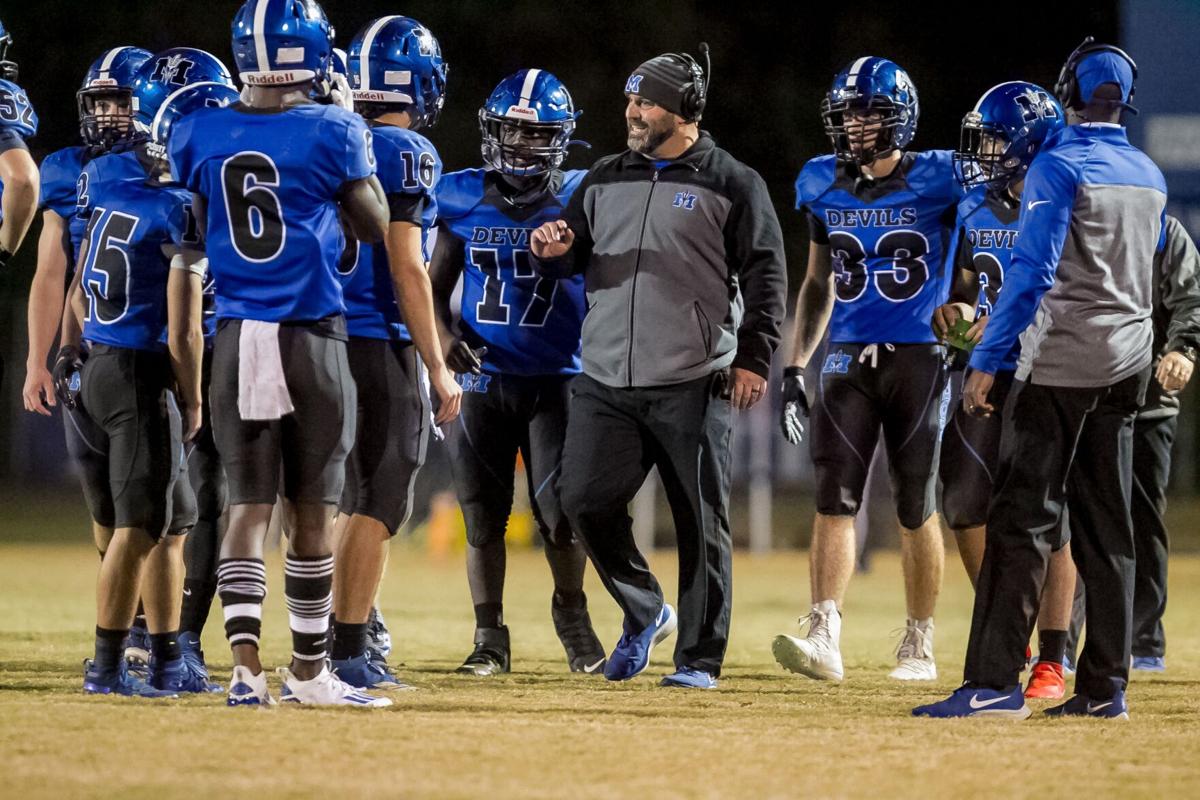 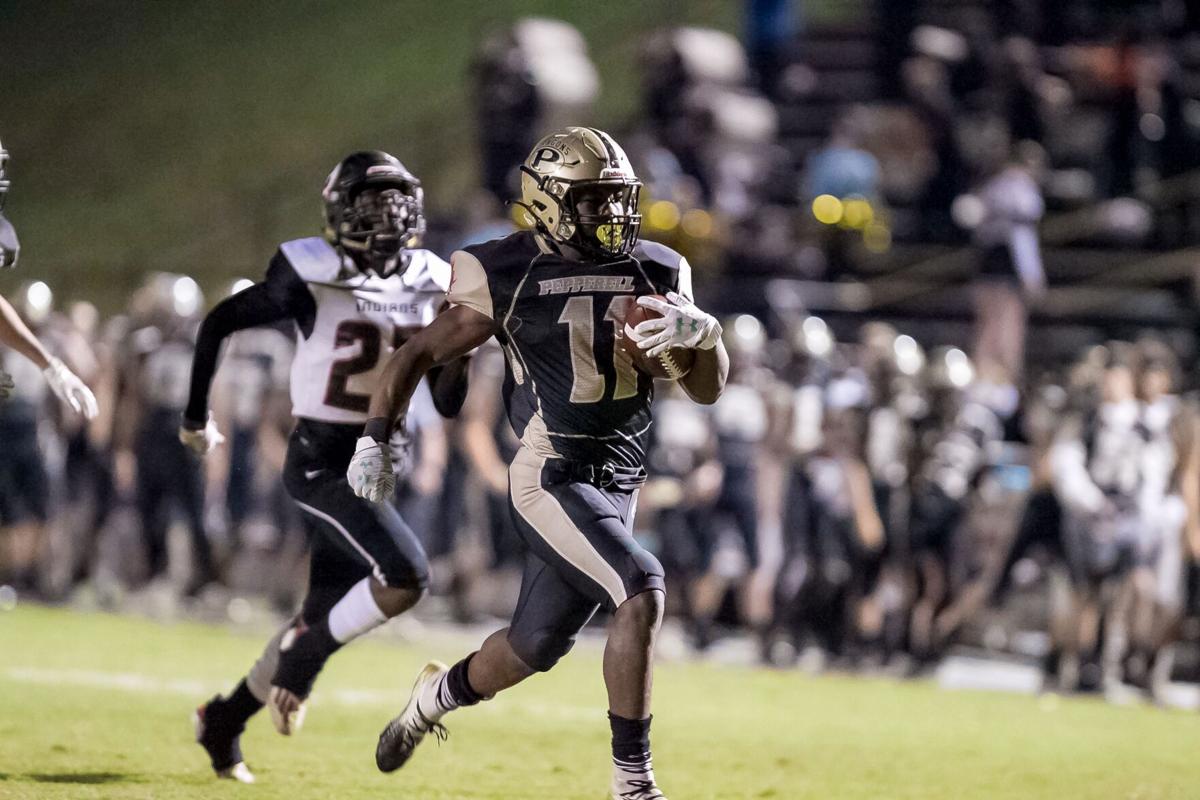 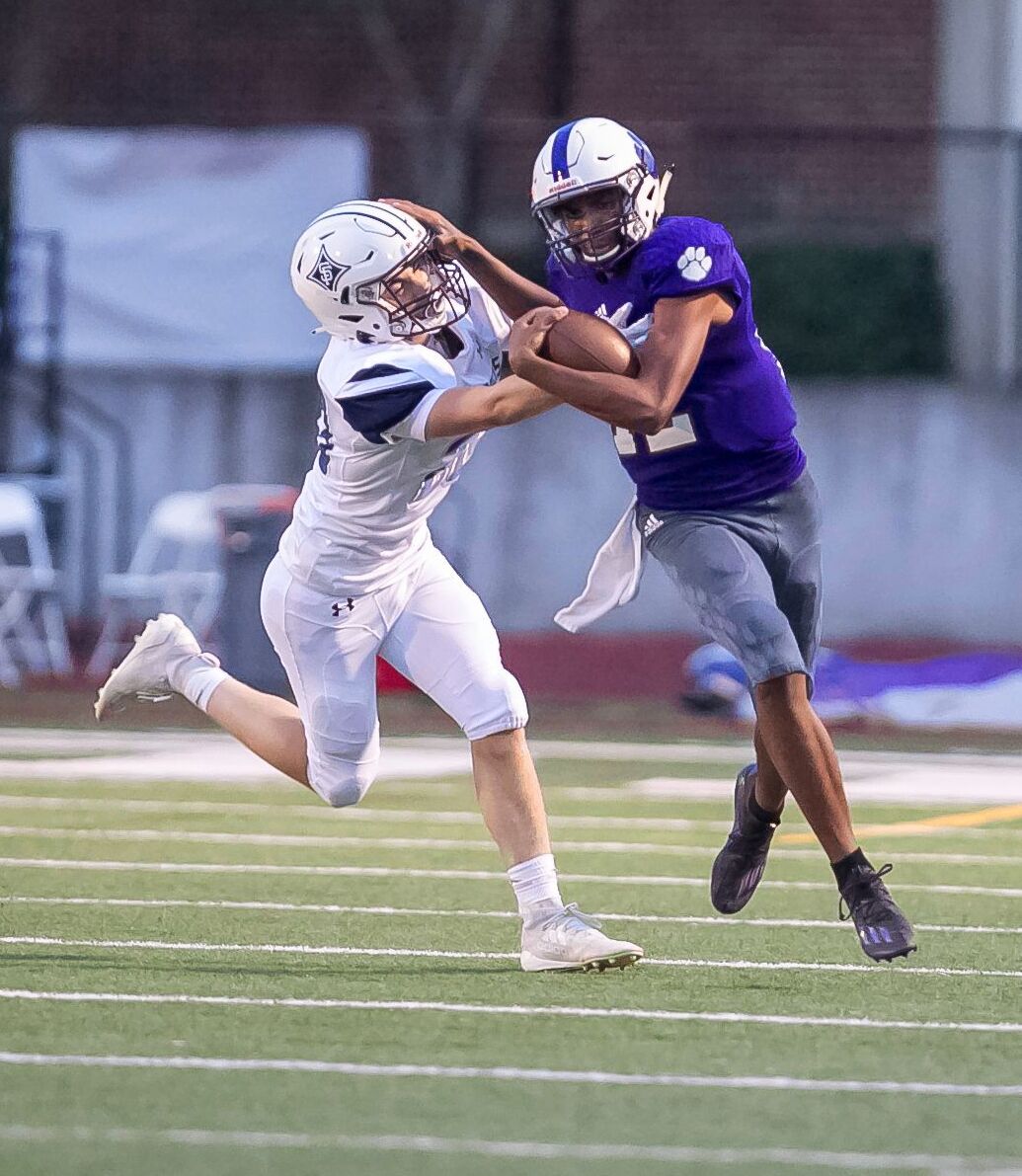 Rome senior running back EJ Lackey carries the football against the Paulding County Patriots at Barron Stadium last Friday. The Wolves will face Habersham Central in the first round of the playoffs.

For four teams in Floyd County, they each begin their respective playoff path toward the same goal, a state championship, albeit at a somewhat pushed-back timeline. Thirty-two teams in each classification remain as aspirations of playing under the lights of Georgia State’s Center Parc Stadium on the final weekend of 2020 dawn.

Four Floyd County-based teams take to the gridiron, looking to advance in the state playoffs.

Everyone is 0-0 now. Welcome to Week 13, the first round of the playoffs.

The Darlington Tigers enter their first-round playoff match after a bye week. Darlington finished the 2020 regular season at 6-4 and 2-2 in Region 7-A Private, earning the No. 3 seed.

On Friday, the Tigers travel to Johns Creek to battle the Mt. Pisgah Christian Eagles. The Eagles also went 6-4 during the regular season, but finished 3-1 in Region 6-A Private.

Darlington is led by junior quarterback Patrick Shelley, who in a 46-7 win over Walker threw for two touchdowns and also rushed for two additional scores.

Senior running back Harrison Allen, who has rushed for over 1,000 yards this season, will likely receive the majority of the carries, but do not be surprised if Shelley rushes on a few occasions.

“We’ve got to be able to sustain drives,” Atha said. “We think it’s a pretty good matchup. I think it ought to be a good football game.”

The Eagles are led by senior quarterback Coleman Smith, who leads the state of Georgia in passing. Smith has tossed 225-for-358 for 2,768 yards with 22 touchdowns and seven interceptions. He also has 179 yards and nine ground scores.

“He’s a formidable challenge, there’s no doubt about it,” Atha said. “They present a huge challenge for us defensively.”

Receiving-wise, senior Nick Speros has been Smith’s favorite target, catching 78 passes for 1,105 yards with seven touchdowns. Garrett Sutherland is second on the team with 615 receiving yards and seven scores.

“First of all, you’ve got to start off by being sound,” Atha said on his defensive secondary. “You’ve got to make sure you’ve got everyone covered. You’ve got to find a way to try to keep (Smith) from setting his feet. I think it starts with our defensive line and then making some adjustments from there.”

“The ability to get the ball out and run it on the edge, mix it up, helps us a lot,” Atha said. “I like our chances defensively. I like the way our kids rally to the ball and the way they tackle when they get there.”

The Tigers and Eagles have only met one time ever. In November 2012, Darlington defeated Mt. Pisgah 31-14.

The Model Blue Devils travel south to the state capital to battle the Washington Bulldogs out of Region 6-AA. The Blue Devils took third place in Region 7-AA after a 28-7 win at Gordon Central last Saturday to conclude the 2020 regular season.

The Blue Devils and Bulldogs will battle at Grady Stadium in Atlanta, as Model seeks its first playoff win since 2014.

Model is led by seniors Sam Silver at quarterback and Joseph Wallace at running back.

Wallace has rushed on 277 occasions for 1,318 yards with 15 touchdowns, including a remarkable 35 carries for 241 yards and five touchdowns against Chattooga on Nov. 17.

Silver has thrown for 598 yards through the air and 248 on the ground with 10 total touchdowns. The Blue Devil offense is averaging 22.5 points per game, their best in four years.

The Model defense has also been a stronger point for the Blue Devils throughout 2020, conceding seven points in each of the last two regular-season games.

The Bulldogs are led by senior quarter Monye’ Jones, who has thrown for 1,303 yards with 22 touchdowns and four interceptions. Jones also has three rushing scores.

Armani Tookes is Washington’s leading ball carrier with 501 yards logged on 84 rushes with five TDs. Tookes is also second on the team in receptions with 21 snags for 405 yards and seven trips across the goal line.

Washington High School falls under the jurisdiction of Atlanta Public Schools. Per district guidelines, no spectators will be allowed at the game Saturday evening.

Hunnicutt confirmed in a text message the game will be livestreamed on the NFHS Network for a pay-per-view fee or fans can listen to the game on Model’s athletic website at https://www.floydboe.net/domain/980 for free.

The Pepperell Dragons will start their state playoff journey within friendly confines. However, a tough matchup will take center stage at Dragon Stadium as the Lovett Lions journey to Lindale.

“It’s a goal we set back in June,” Dragons head coach Rick Hurst said on hosting a playoff game. “We’ve been pretty good at home in home playoff games in my tenure here and hopefully that will continue, but it’s a huge thing to be able to start the playoffs in your own backyard.”

Pepperell’s sophomore running back DJ Rogers has become the focal point for the Dragon offense, generating over 1,200 yards during the regular season.

Matthew Waddell will lead Pepperell under center, as he has help to guide the team to a 4-1 record in Region 7-AA.

Hurst said whichever side does not turn the ball over will be be the likely victor.

“We’ve got to be consistent in our drives. We need to have some long drives,” Hurst said. “Defensively, we have to play disciplined, tackle well which I think we’ve done better over the last few games, but that’s got to continue.”

“That’s where we might have a little bit of an edge,” Hurst said. “I like what Kolby Davis has done punting the football and giving us a chance to flip the field. Our kicking game with Will Helton being able to kick it deep and through the end zone a lot of the time ... has been a big deal for us.”

Lovett is led under center by 6-foot freshman quarterback Preston Lusink. Lusink has thrown for 928 yards with 14 touchdowns and six interceptions. He also has three ground scores.

Lusink’s top target is Collin Goldberg, who has recorded 25 catches for 374 yards and four TDs.

Offensively, the Lions have averaged 288.6 yards per game. Defensively, they have 13 sacks with 43 tackles-for-a-loss.

“(They’re) a solid football team,” Hurst said. “They do everything well (and they’re not a lot of weaknesses. They’re very disciplined and we have to match that discipline to stay in there with them.”

Both Pepperell and Lovett have had extended time off since stepping on the field against another opponent. The Dragons last played on Nov. 13 while the Lions previously suited up on Nov. 6.

Pepperell is 1-3 all time against Lovett, with three of those four meetings coming in the first round of the playoffs.

The Rome Wolves prepare to defend home turf as the Habersham Central Raiders make their way to Barron Stadium for a Friday night showdown.

The game will be Rome’s first contest in the Class AAAAAA state playoffs, and head coach John Reid is looking forward to the friendly crowd.

“It gives you a leg up in seating,” Reid said. “I think (this team) has done everything I’ve asked them to do.”

For the Wolves, they will be led at quarterback by freshman Reece Fountain. Since entering as starter for senior quarterback Caleb Ellard, Fountain has thrown six touchdown passes to zero interceptions. Fountain has also tossed for more than 100 yards in four of his five starts.

Senior receiver Jay Wise has been the top target through the 2020 regular season with 40 receptions for 566 yards and four touchdowns.

In the running back category, it’s impossible to overlook the importance of senior EJ Lackey.

Lackey has been the main workhorse throughout the season, garnering 871 yards on 154 carries with six touchdowns. His most productive game came in the Paulding County game, when Lackey rushed 25 times for 237 yards and four touchdowns.

Behind Lackey, freshman Shaun Nelson has stepped into the fold. With three carries shy of the century mark, Nelson 462 yards and five TDs, including two last time out on the gridiron. Junior Bryson has also taken some handoffs this season with 26 touches for 250 yards.

“You try to establish it as a good program,” Reid said. “You still have to have a balanced attack because good teams and good coaches can take things away from you numbers wise.”

For Habersham Central, senior quarterback Joshua Pickett has proven himself to be a one-man wrecking crew.

Pickett has passed 69-for-149 for 954 yards with nine touchdowns and eight interceptions.

Rushing-wise is where Pickett packs a massive punch with over 1,500 yards on the ground, including a whopping 21 rushing touchdowns.

Pickett has averaged 247.5 yards per game by himself. As a team, Habersham Central’s offense averages 382.1 yards.

In the run game, Pickett has paired with senior tailback Jackson Clouatre. Clouatre recorded 161 rushes for 1,101 yards and nine scores.

“In the past, we’ve broken down the season into three parts: first five games, second five games, third five games,” Reid said. “Message to the team in the more general sense is you just try to win. One game at a time.”

This will be the first meeting between Habersham Central and Rome.

Biden: We'll 'manage the hell' out of feds' COVID response