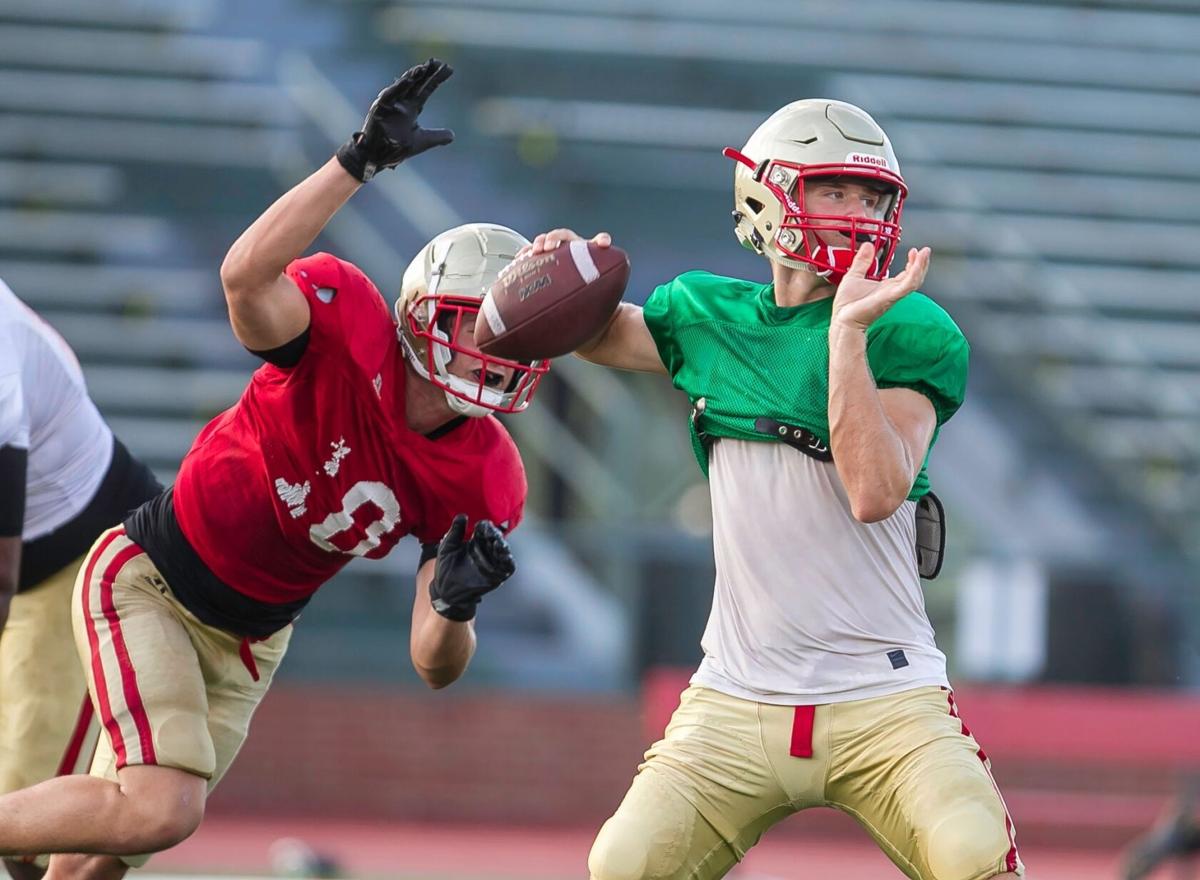 Rome senior quarterback Caleb Ellard prepares to throw a pass with fellow senior Bryant Wilkinson closing in during the Wolves’ scrimmage at Barron Stadium on Aug. 21. 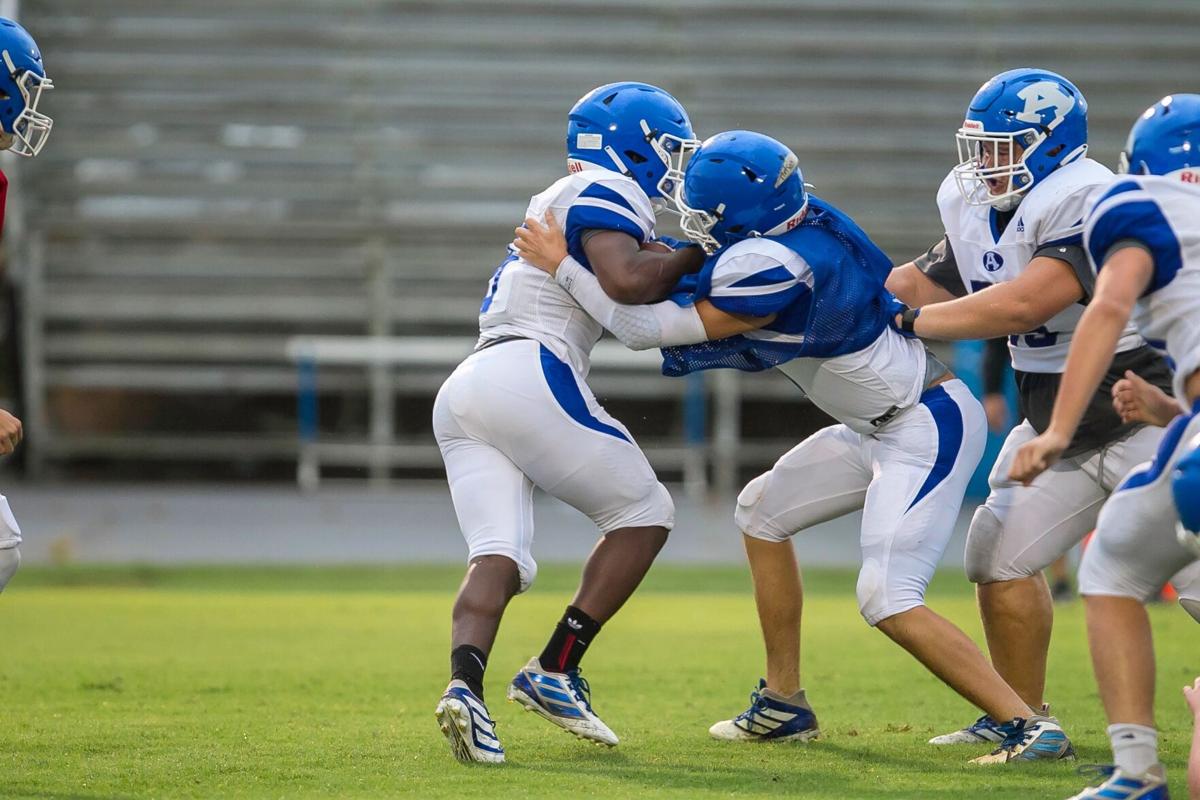 An Armuchee back attempts to break a tackle during the Indians’ scrimmage Aug. 20.

Rome senior quarterback Caleb Ellard prepares to throw a pass with fellow senior Bryant Wilkinson closing in during the Wolves’ scrimmage at Barron Stadium on Aug. 21.

An Armuchee back attempts to break a tackle during the Indians’ scrimmage Aug. 20.

The day has finally arrived. After much deliberation, the 2020 Georgia High School Association season is here, and four of Floyd County’s seven area schools take the field. Here’s the rundown of games for Week 1:

This game was originally supposed to be part of the 29th edition of the Corky Kell Classic in the latter half of a doubleheader, but after recommendations from health officials, Corky Kell decided to move elsewhere. Now, Rockmart and Rome will be the lone contest of the evening at Barron Stadium, but it is sure to be a lively atmosphere.

The contest brings together two regional powers from Class AAA and 6A, separated by just 24 miles. This will be the first-ever meeting between the schools in football.

Rome’s John Reid goes for win No. 59 entering his sixth season as head coach, as the Yellow Jackets and Wolves kick off under the lights of Barron Stadium at 7:30 p.m.

The Pepperell Dragons take their road talents south to Haralson County to battle the Rebels. Pepperell head coach Rick Hurst is excited about getting to kick off the 2020 season against a formidable foe.

“They’re very good at what they do offensively,” Hurst said in a phone interview. “They’re not real fancy. (They’re a) physical football team. We’re going to have to match their physicality.”

The Rebels run the ball and sustain long drives, keeping opposing defenses tired and opposing offenses off the field. Hurst said it is imperative the Dragons capitalize when they have possession.

“Maintaining long drives. That’s the one thing that I can say that keeps me up at night,” Hurst said. “We have to sustain drives and we have to score points when we get the football. I told our players, I think the biggest thing that’s going to come down to this game is who makes the least amount of mistakes and who can capitalize on putting points on the board.”

The Dragons maintain an all-time record of 21-1 against the Rebels, including a 21-game winning streak. The most recent win for Pepperell came five years ago at Harlason County 38-8.

Kickoff at Haralson County is scheduled for 7:30 p.m.

The Model Blue Devils are on the road to begin their 2020 campaign as they battle the Sonoraville Phoenix at Sonoraville High School. The Phoenix won last year’s matchup at Model 18-10.

“I think it’s a sigh of relief for a team who has 18 seniors,” Model head coach Jeff Hunnicutt said. “There’s been a certain level of excitement as well within the kids because number one, it’s an opportunity to hit another team and number two, let’s just see where we’re at for 2020 Model football.”

Hunnicutt said he and Sonoraville head coach Denver Pate go way back to their time at Pepperell High School.

“He was kind of my backup in high school, so to say we know one another would be kind of an understatement,” Hunnicutt said. “Coach Pate’s going to have his kids prepared and I hope I have mine prepared and I think we, as a coaching staff, have done a good job with that this season. I’m looking forward to a good, competitive game on Friday night.”

Model is 6-8 all time against Sonoraville, with Model’s most recent victory a 22-0 shutout at Sonoraville in 2016. The two schools have met every year since 2009.

Kickoff at Sonoraville is scheduled for 7:30 p.m.

“They’re a little bit like us,” Armuchee head coach Jeremy Green said. “They’ve struggled, but the kids that they’ve got are hardcore kids. It’s going to be a real physical ball game. That’s the biggest challenge for us is the physicality of it and just a little bit of rust because we haven’t played anybody other than ourselves.”

Green is excited about the opportunity to hit the field Friday night, noting the level of enthusiasm is unlike any other.

“There is no doubt in my mind that the beginning of this ball game is going to feel a lot different than any other that we’ve ever played,” Green said. “The long layover from school and football and other things, it kind of helped put in perspective what’s important to us.”

“This is the year I haven’t had to get kids fired up for practice,” Green added. “Kids are ready to practice. They found out how much they loved it.”