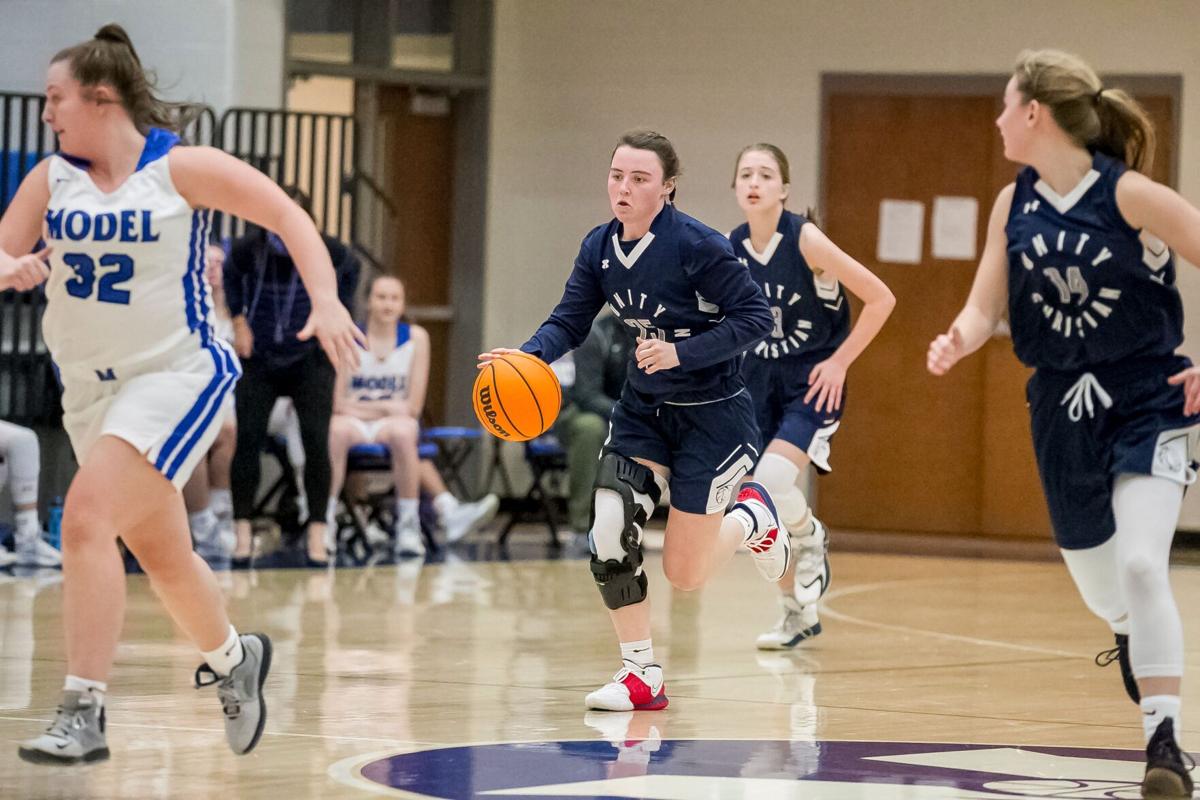 Unity Christian’s Annie Plant (center) dribbles the basketball down court during a game against the Model Lady Devils on Jan. 4. Plant scored 19 points against Georgia Cumberland Academy at the Lions Den on Jan. 23. 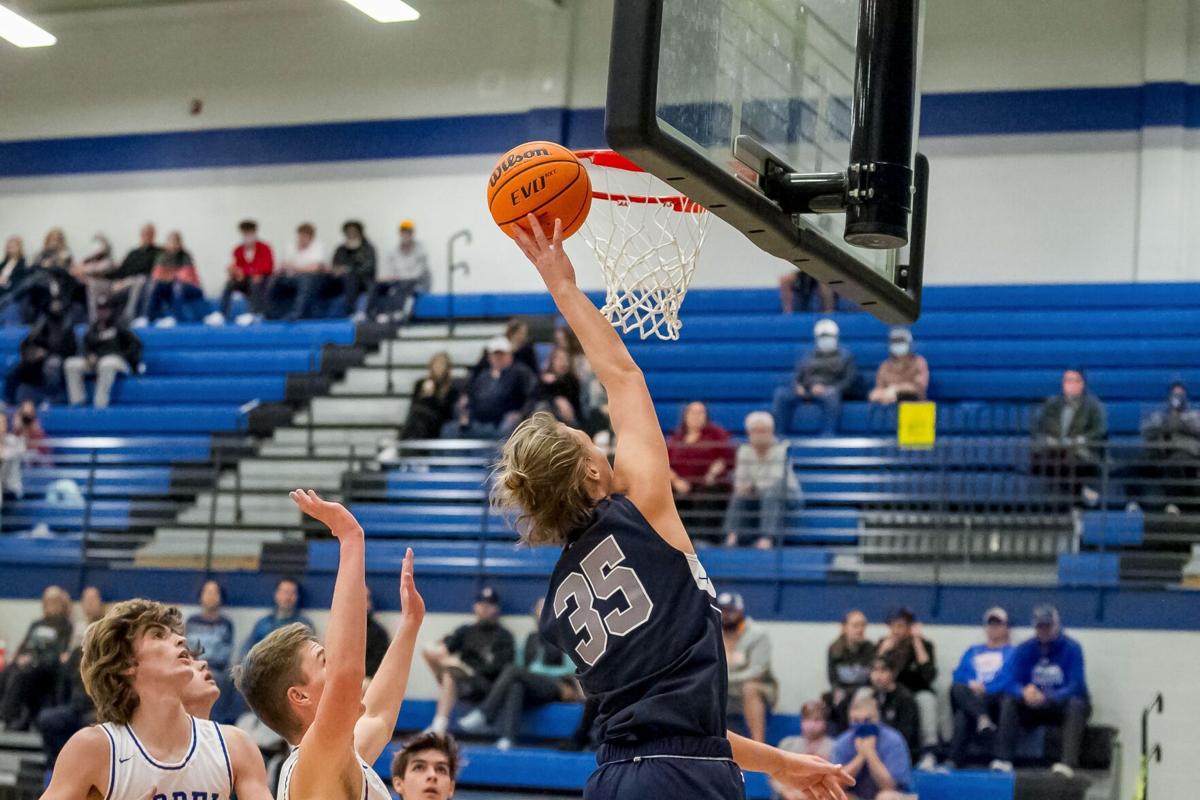 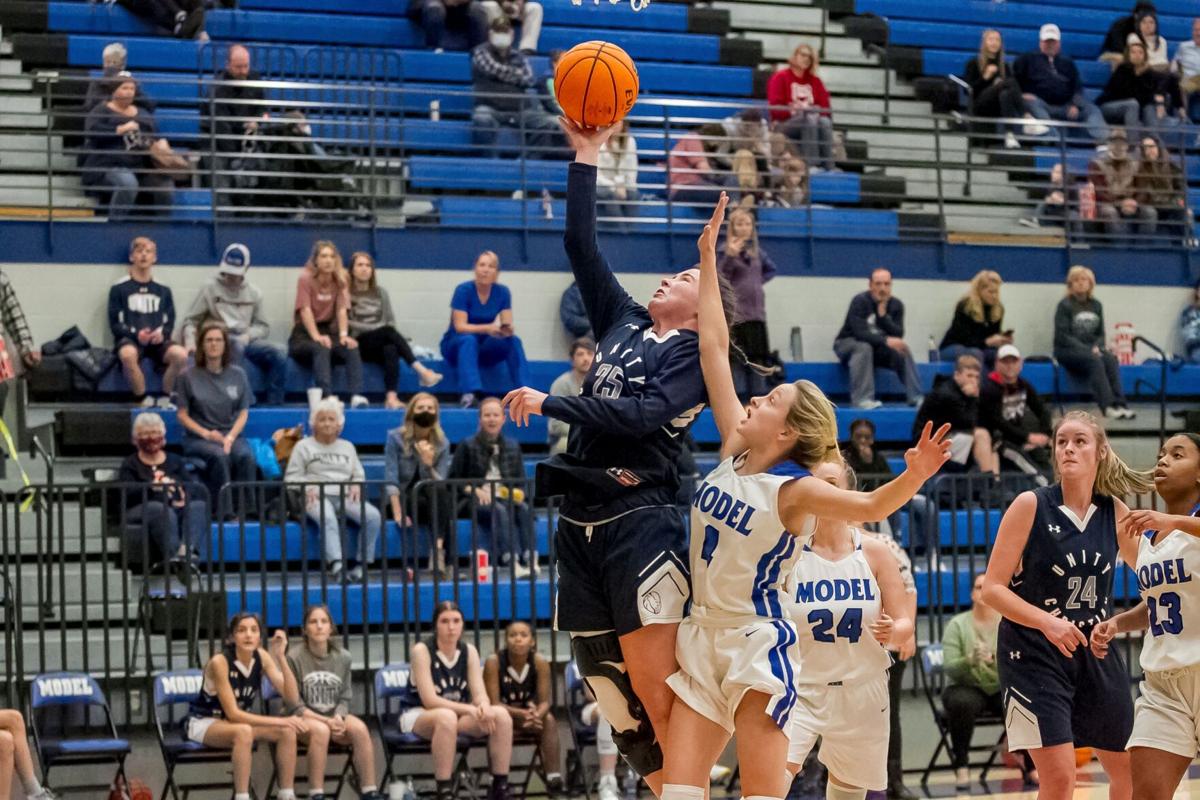 Unity Christian's Annie Plant goes for a layup during a game against the Model Lady Devils at Model High School on Monday, Jan. 4.

Unity Christian’s Annie Plant (center) dribbles the basketball down court during a game against the Model Lady Devils on Jan. 4. Plant scored 19 points against Georgia Cumberland Academy at the Lions Den on Jan. 23.

Unity Christian's Annie Plant goes for a layup during a game against the Model Lady Devils at Model High School on Monday, Jan. 4.

Playing in front of their home crowd in the Lion’s Den, both the Unity Christian boys and girls’ basketball teams earned wins over the visiting Georgia Cumberland Academy Jaguars on Saturday.

In the nightcap, the Unity boys led by just a point at halftime before finding another gear and pulling away for a 76-59 victory.

The Lions edged out the Jaguars by just three points when the two teams met in early December, and the rematch had the feel of another thriller through the opening two quarters as GCA finished the second frame on a 13-4 run, cutting the deficit to just one at 34-33 at halftime.

Thanks to consistent production on the boards and around the rim, Unity (8-8, 5-1 GAPPS Division I-AA Region 1-A) turned what had been a slim margin into a comfortable lead. The Lions hit only three shots from beyond the arc but still finished with 76 points.

“We just started playing a little bit better,” Claytor said. “We were shooting ourselves in the foot a lot in the first half. A lot of silly turnovers and we struggled a little bit on defense, but we just tightened everything up.”

Two post players for Unity answered the call whenever the Jaguars gained any sort of momentum, with Hudson Hill putting in a game-high 23 points and Caleb Thompson adding 15. The duo dominated the paint throughout the entirety of the night.

“[Hill] was our go-to guy for this game,” Claytor said. “They didn’t really have an answer for him.”

The Lions helped seal the win with some excellent foul shooting, finishing with a mark of 22-of-27 from the free throw line.

Austin Wilkerson chipped in 16 points for Unity and Tahiri Tolbert had 8 points.

Up next for the Unity boys will be a road contest against The Grace Christian Academy on Tuesday at 6 p.m.

In the girls game, the Unity Christian Lady Lions controlled from the opening tip, never letting the visitors threaten in what turned into a 62-23 blowout.

Constant pressure from a suffocating full-court defense was just what Lady Lions head coach Melanie Thornbury wanted to see after all their recent work in practice on the press.

“I saw them executing the press, I saw them sharing the ball, knocking down shots that we’re supposed to knock down, and we had awesome defense,” Thornbury said.

Annie Plant was held in check for much of the first half but finally started to get in a rhythm in the later stages of the game, finishing with a game-high 19 points. Sydney Wells scored 11 points in the first half and finished with 13.

A stellar bench effort for the Lady Lions was highlighted by a crowd-pleasing spurt from Andrea Creel, who at one point in the fourth quarter came into the game and promptly scored 10 straight points for Unity on five made field goals.

Up next for the Unity girls will be a home matchup against Model on Thursday at 5:30 p.m.