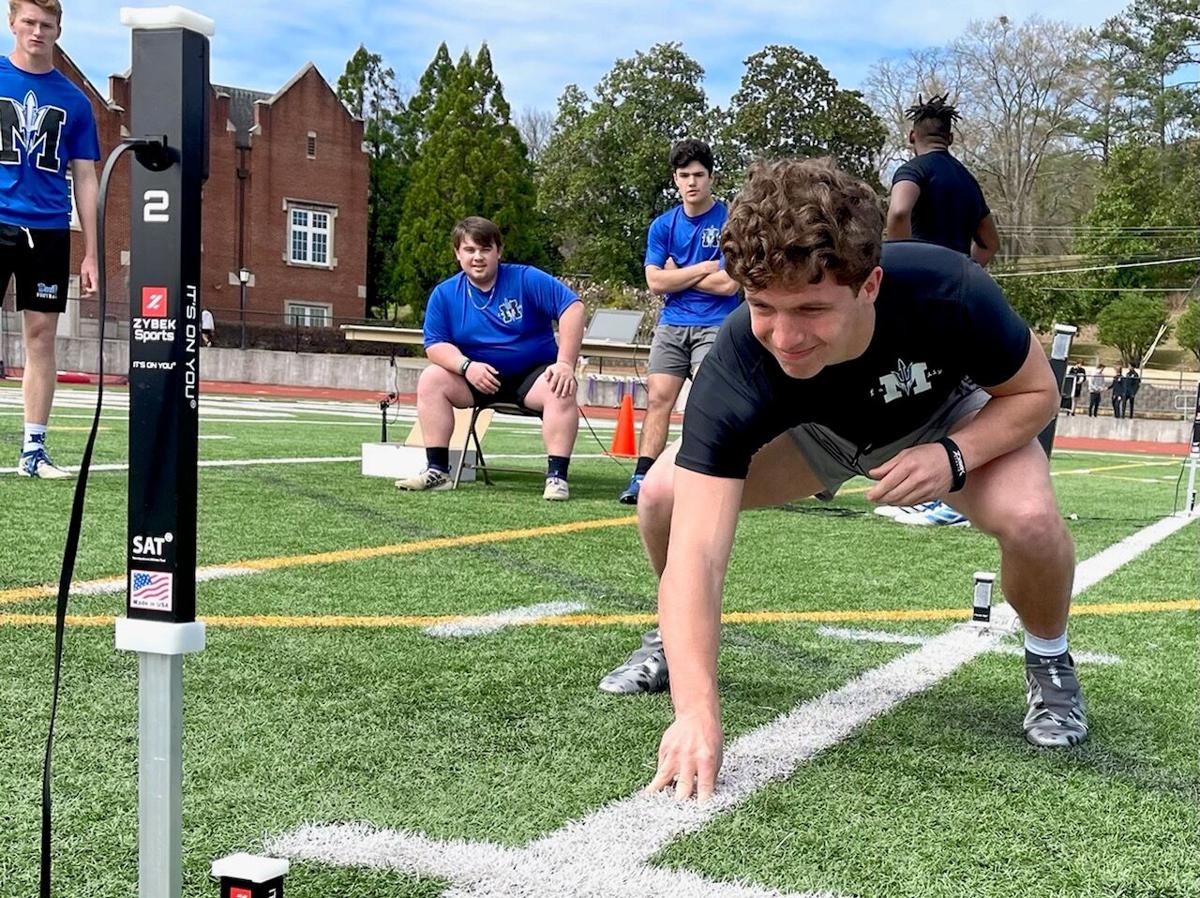 A Model High School football player lines up for a drill at Darlington's Chris Hunter Stadium on Sunday, Mach 21. 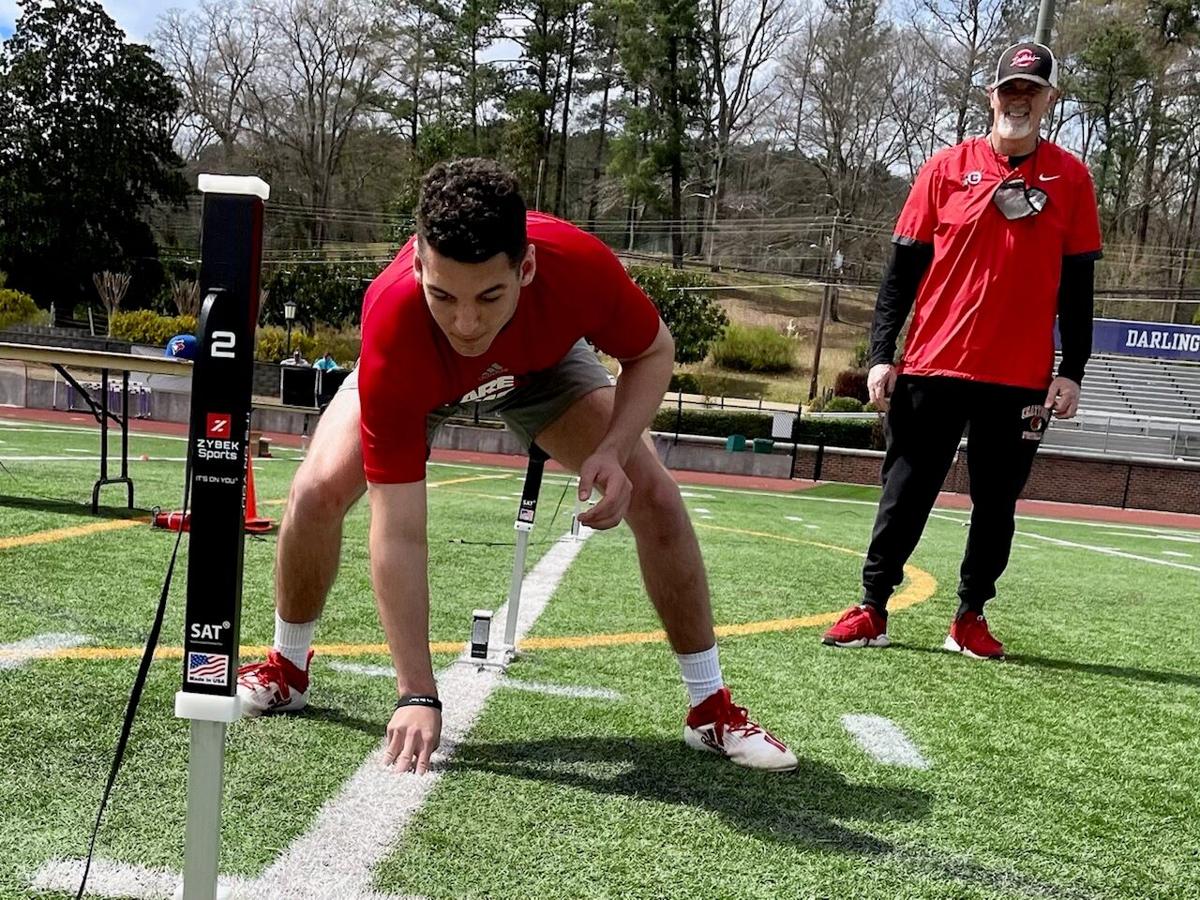 A Chattooga football player lines up to begin a drill at Darlington's Chris Hunter Stadium on Sunday, March 21.

Darlington's Patrick Shelley leaps up during a drill at Chris Hunter Stadium on Sunday, March 21. 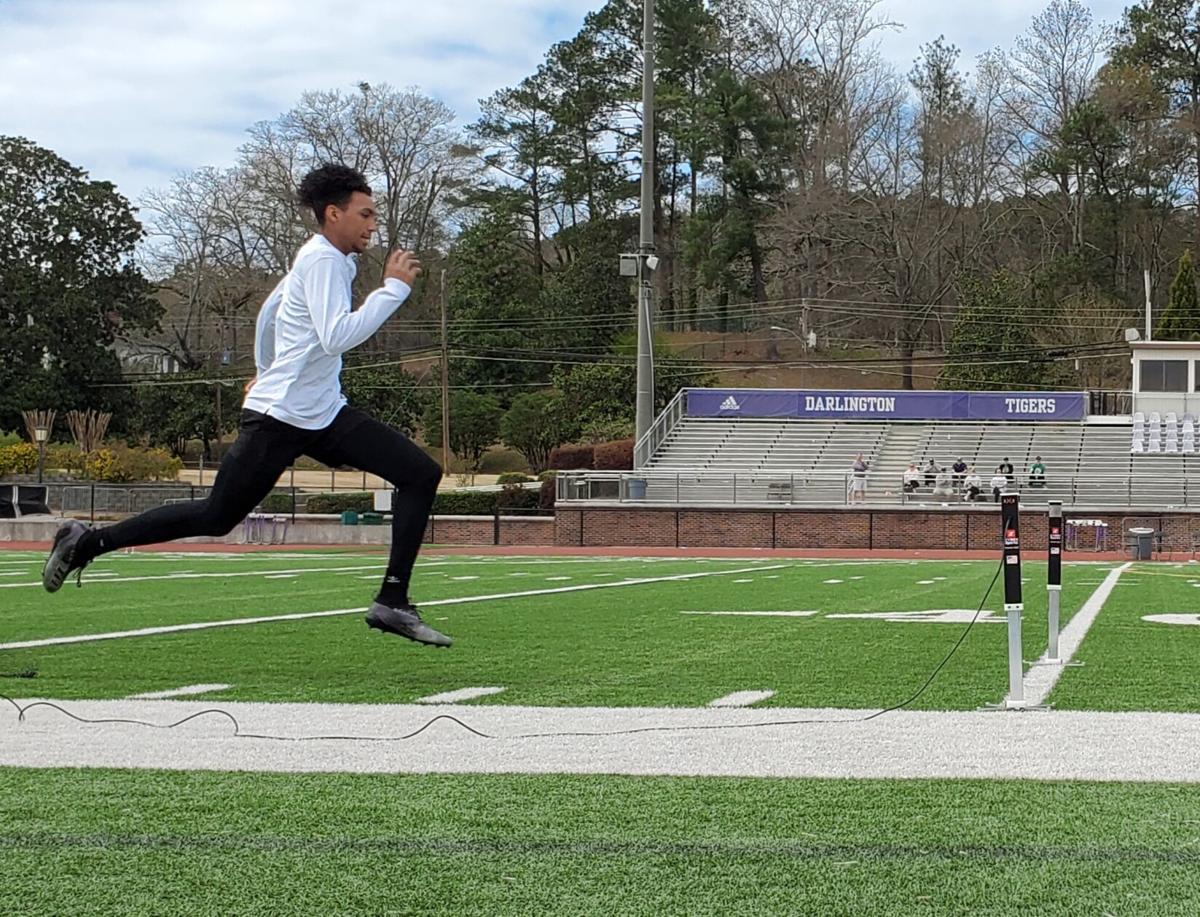 Above: Darlington’s Patrick Shelley runs the 40-yard dash at Chris Hunter Stadium on Sunday. Below: A Model High School football player lines up for a drill. 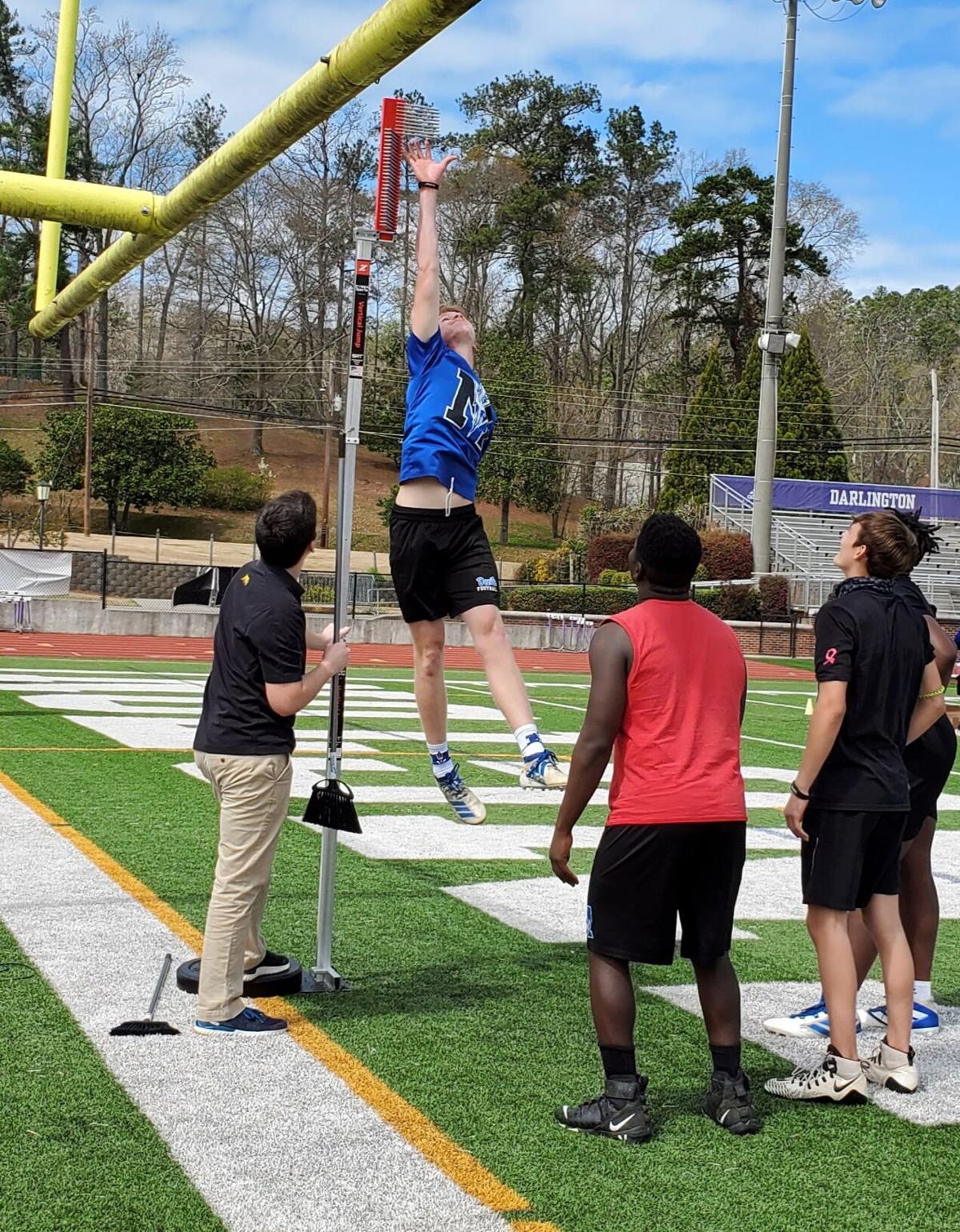 A Model football player jumps up during a vertical measurement drill at Darlington's Chris Hunter Stadium on Sunday, March 21.

A Model High School football player lines up for a drill at Darlington's Chris Hunter Stadium on Sunday, Mach 21.

A Chattooga football player lines up to begin a drill at Darlington's Chris Hunter Stadium on Sunday, March 21.

Darlington's Patrick Shelley leaps up during a drill at Chris Hunter Stadium on Sunday, March 21.

Above: Darlington’s Patrick Shelley runs the 40-yard dash at Chris Hunter Stadium on Sunday. Below: A Model High School football player lines up for a drill.

A Model football player jumps up during a vertical measurement drill at Darlington's Chris Hunter Stadium on Sunday, March 21.

Football-focused, the players participated in drills that mirror exactly what would take place at the annual NFL Scouting Combine, including the famed 40-yard dash and broad jump. The NFL Combine measures prospects’ abilities prior to the NFL Draft.

“We started getting into sports because that’s the fun side of data analytics,” Hound Talint CEO Tim Naddy said. “We’re trying to use athletics as a platform to show that you can ... use data analytics on and off the field, so we can help student athletes ... get recognized by scouts by these metrics that are universally accepted. We can also help other kids who maybe want to be inside sports, but ... maybe they’re not on the gridiron or in the diamond, but they really want to be a part of it, so maybe they can learn something here that they can use in a future career.”

Mike Weinstein, founder and owner of Zybek Sports, was on site Sunday for the showcase event. Zybek Sports not only works in football, but also other sports such as softball, volleyball and soccer.

“We’re glad to be here working with the athletes,” Weinstein said. “We’re getting people set up for testing the athletes so we can show the athletes exactly how they stack up. We’ve done over 100,000 athletes in the last seven years.”

At Sunday’s event, drill or measurement stations were set up for the athletes, where their data was collected and recorded electronically. Athletes can then see where they measure against others nationwide based on their class and position.

Naddy said student-athletes are in charge of their own data and can share it however they see fit, including on social media websites.

“I think the interesting thing they do is, because it’s national, ... your kids have the opportunity to go in and measure themselves against national averages,” Darlington football head coach Tommy Atha said. “It’s not just subjective. Now you can go in and see where you stack up with. Our hope is that this thing will be a yearly thing so our freshman can come back and see what their progress is.”

Atha said he had 18 Darlington Tigers on the field, ranging from freshmen to seniors.

“I’ve been pleased with the guys who have come out here,” Atha said. “These kids have made progress in the weight room over the course of the year. (Also) the enthusiasm, just wanting to be out here, wanting to compete and pulling for each other.”

Weinstein said his focus on high school sports stems from when his children attended high school and saw a critical need for standardized, accurate measurements.

“I could just really see the need for this because so many athletes and parents as much as the athletes need something objective they can believe in,” Weinstein said. “Whether you’re a great playing on a not-so-great team or vice-versa ... we’re showing the athlete how they stack up against everybody else.”

All of Sunday’s participants went through Zybek Sports’ trademarked Standardized Athletic Testing, or SAT, not to be confused with the SAT academic standardized test.

Another of Zybek’s registered trademarks is “It’s on You,” which Weinstein explained is a guiding philosophy not only for the company, but also the athletes they work with.

“You will never have a coach say ‘Start. Run. Go,’ we say ‘It’s on you,’” Weinstein said. “It’s kind of empowering for the kids because there’s little things you can control in life, a lot of stuff you can’t, but this is something that you can really control and focus on.”

Using motion-sensing lasers in the 40-yard dash, the clock starts when the athlete moves. As soon as the runner reaches 40 yards, the clock stops.

Weinstein said he can measure an athletes’ time at various markers along the 40 yards. The athletes, in turn, can see where they are in terms of the nationwide pool and what/where they need to focus their concentrations for improvement.

Weinstein said every coach who participated in Sunday’s event with at least 10 athletes present will get a coach’s report, which will show where their team stacks up in relation to other teams across the country.

“For the coaches and people training the athlete, this is pretty valuable because now ... they can prove to the parent and the athlete that the athlete is getting better,” Weinstein said. “We show exactly what that athlete needs to do to get to that next level or possibly play Division I sports someday. You want to get there, it’s on you.”

ATLANTA - More Georgia families will be getting help from the state paying for child care under an initiative Gov. Brian Kemp announced Monday.

With six months to go before the primaries for Northwest Georgia’s congressional race, candidates are focused on fundraising.

President George W. Bush is remembering Colin Powell, who served as his secretary of state during his first term. Powell, 84, died Monday at Walter Reed National Medical Center due to COVID-19 related complications, his family said. They also noted he was fully vaccinated against the virus. In a statement from the George W. Bush Presidential Center, Bush said that he and his wife Laura were ...

Colin Powell, former U.S. secretary of state under President George W. Bush, died Monday morning from COVID-19 complications, his family wrote on Facebook. The 84-year-old was fully vaccinated against the virus, according to his family. Powell was the first the Black person to serve as secretary of state and as chairman of the Joint Chiefs of Staff. He also was awarded two Presidential Medals ...

The Rome Civic Center on Jackson Hill opens Monday as a second location where city residents can cast early votes in the municipal elections.

Over 160 people already voted in municipal elections, weekend voting on for Saturday

As the first week of early voting for Rome municipal elections wraps up, 168 people have cast their votes so far.

Georgia’s nationally watched U.S. Senate race – a contest that could decide the balance of power in the world’s greatest deliberative body – keeps raking in the big bucks.

In all his years of gridiron greatness, Herschel Walker never ran into anything like this.

Tom Leonard, superintendent of Westlake schools, to retire in January 2023

Why are Florida stone crab prices so high this season?

"It's time for us to be an example": Holly Springs mayor takes stance against civil asset forfeiture

Deputies: Man shot at a truck while driving in Cherokee County