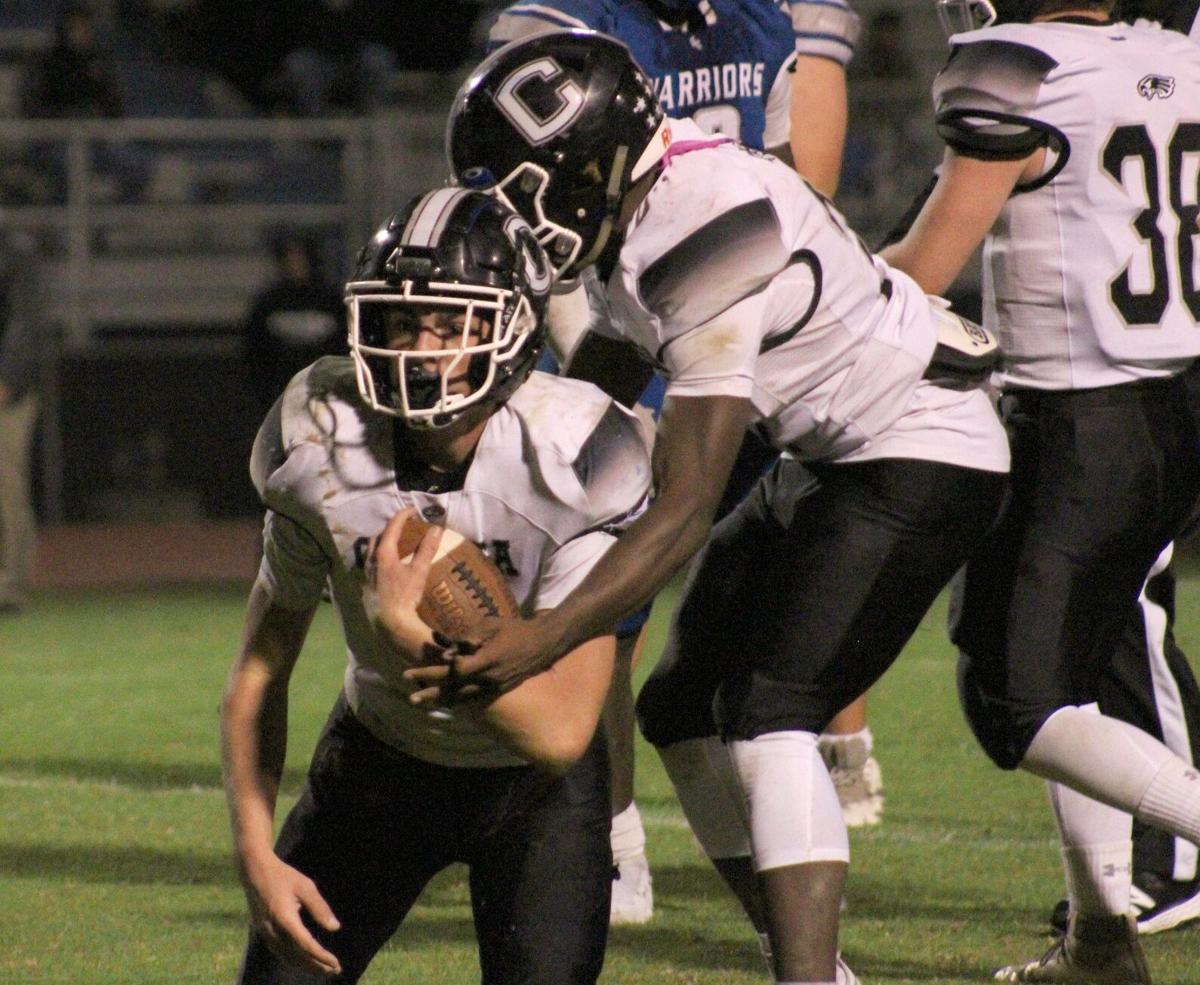 Coosa senior Jaxon Thomas picks off a Gordon Central pass during the Eagles’ region game at Gordon Central on Oct. 30. On Friday, Nov. 6, against Dade County, Thomas recorded the game’s first points with a touchdown run. 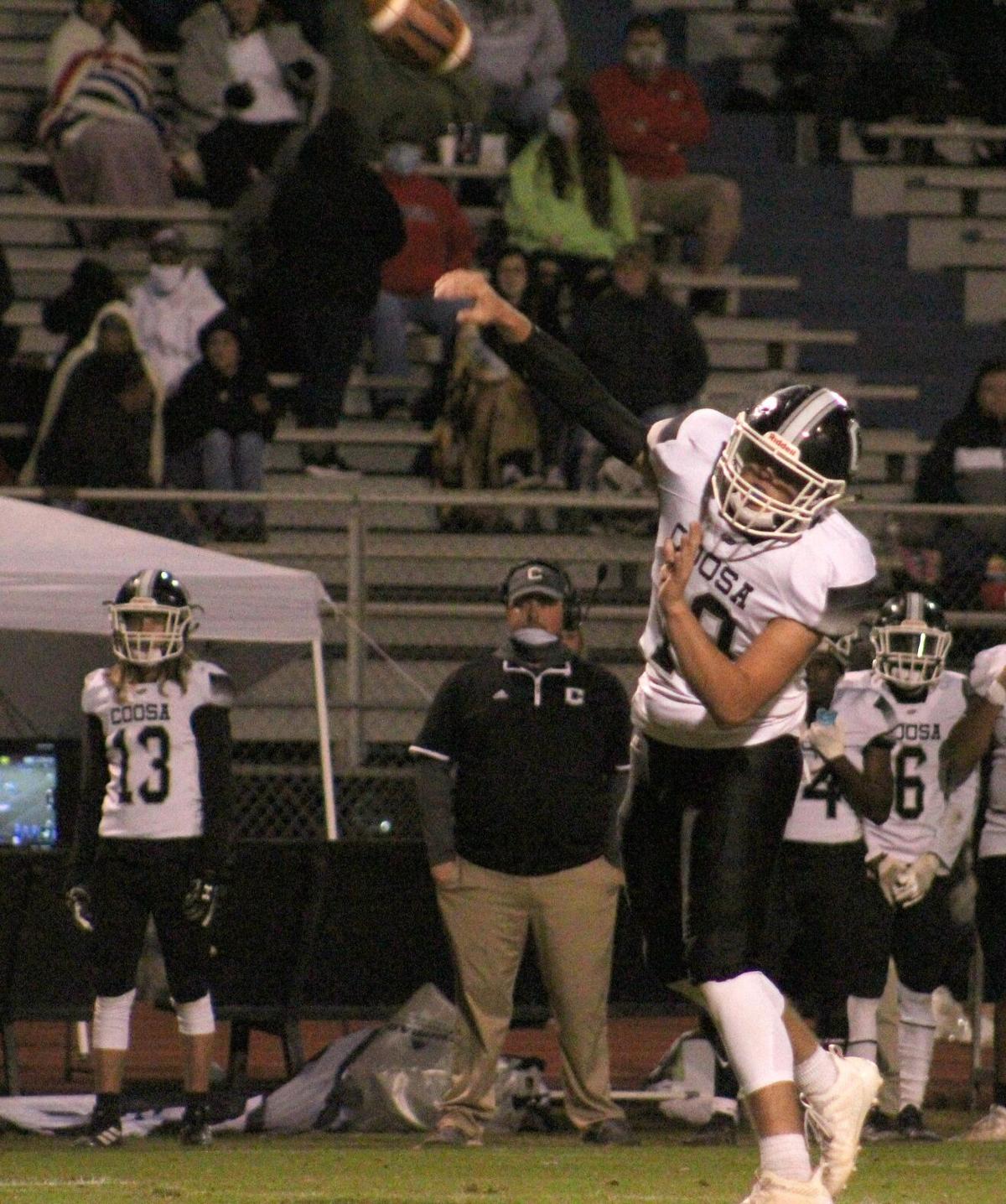 Coosa quarterback Hayden McBurnett attempts a pass during a region game against the Gordon Central.

Coosa senior Jaxon Thomas picks off a Gordon Central pass during the Eagles’ region game at Gordon Central on Oct. 30. On Friday, Nov. 6, against Dade County, Thomas recorded the game’s first points with a touchdown run.

Coosa quarterback Hayden McBurnett attempts a pass during a region game against the Gordon Central.

Trailing 7-0 entering the fourth quarter, Gordon Central came alive in the final frame to roar to a 22-7 win over Coosa on Homecoming Night in Calhoun.

“I wish we weren’t having to come from behind,” Gordon Central coach T.J. Hamilton joked. “We had several plays in that first half where we knew we should have scored, and we let it slip away. But we came out in the second half and made some good adjustments.”

The rally started four minutes into the fourth quarter, when Gordon Central’s Sean Gray capped off a long drive by running it in from 11 yards out to give the Warriors their first points of the night. Allan Garcia’s extra point made it 7-7.

Later, after recovering a bad snap on a Coosa punt attempt, the Warriors took advantage by handing it off to their star tailback Jordan Boone, who broke off a highlight-reel 48-yard touchdown run for the go-ahead score with just 90 seconds left.

The Warriors decided to go for two, and Tre Williams punched in the conversion to bring the Gordon Central advantage to 15-7.

Coosa (3-4, 0-3) still had over a minute left to try to tie it, and was driving down the field when a Hayden McBurnett pass was picked off by Randall Carnes and returned 45 yards to the Coosa 5-yard line. Williams ran it into the end zone from five yards out to put the game on ice.

It was a tough result for a Coosa team that created four takeaways on the night, including three fumbles and an interception, but couldn’t muster enough offense to consistently capitalize.

“The kids battled and they fought hard defensively,” Coosa coach Joey Mathis said. “We played great defense and got great field position, we just couldn’t convert it into anything.”

The first half was a grind-it-out slugfest, with neither team able to move the ball effectively.

The Eagles defense got a fumble recovery from Josh Dixon and an interception from Jaxon Thomas, but didn’t have anything to show for it, leading to a 0-0 score at the break.

Coosa’s lone points at Ratner Stadium came of a 3-yard touchdown run from Thomas in the third quarter to open the scoring.

In the second half, Coosa created two more takeaways when Justin Hammons and Jordan Mitchell each recovered fumbles.

However, the fourth quarter saw Gordon Central create the needed spark with a big 36-yard carry from Tre Williams and a long pass completion to Ethan Watson.

“Football is a game of momentum,” Mathis said. “It’s tough once that thing swings to get it back, and we left some plays out there. But once it swings, you just got to make a play, come together, circle the wagons and try to get a stop to swing it back in your way.”

Boone’s electric 48-yard go-ahead rushing score with 90 seconds to play was part of a Herculean effort from the tailback, who has quietly rushed for over 100 yards in every game he’s played in this season.

“He’s an absolute beast,” Hamilton said. “That’s the only way I can put it. And when you have him and Tre (Williams) in the backfield together, with our offensive line, they’re special kids.”