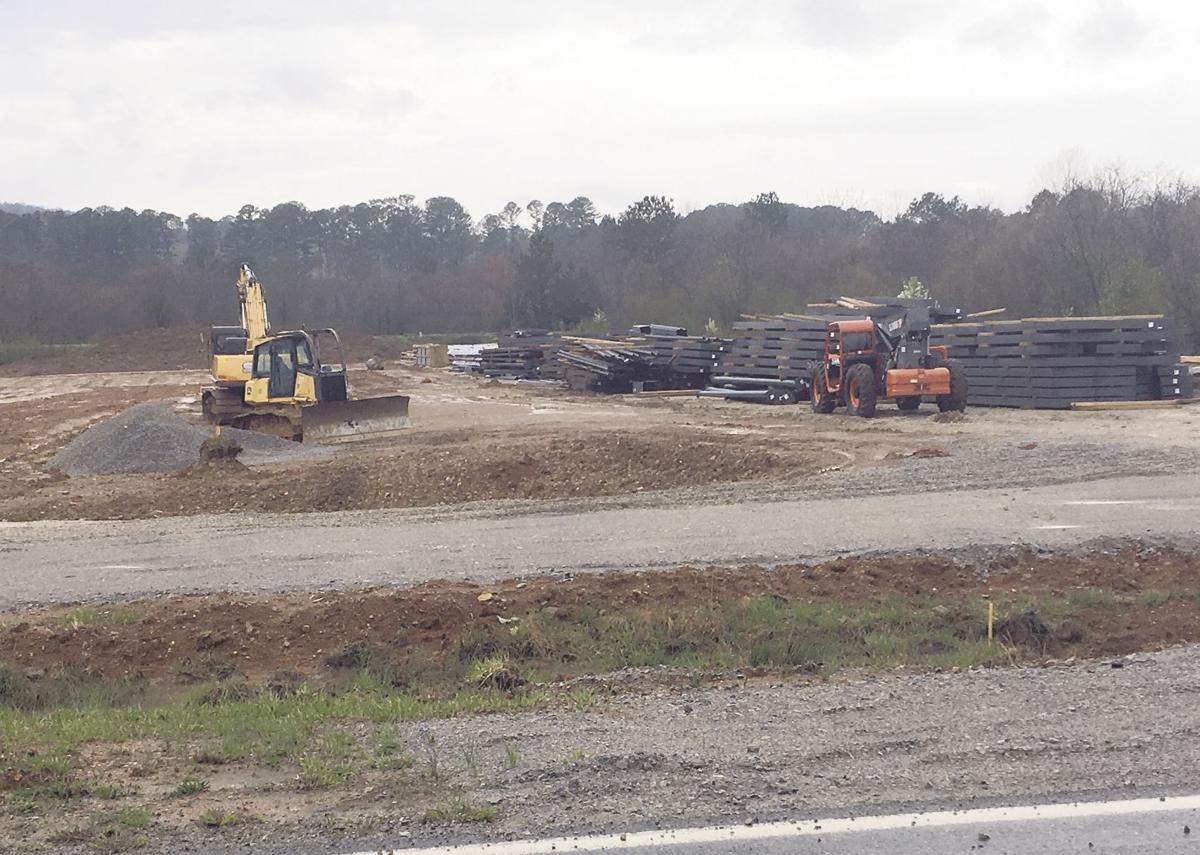 Steel lies stacked up to the right side of this image, waiting for drier weather to begin setting the foundation for a new Southeastern Mills warehouse and distribution center in the Floyd County Industrial Park. / Doug Walker 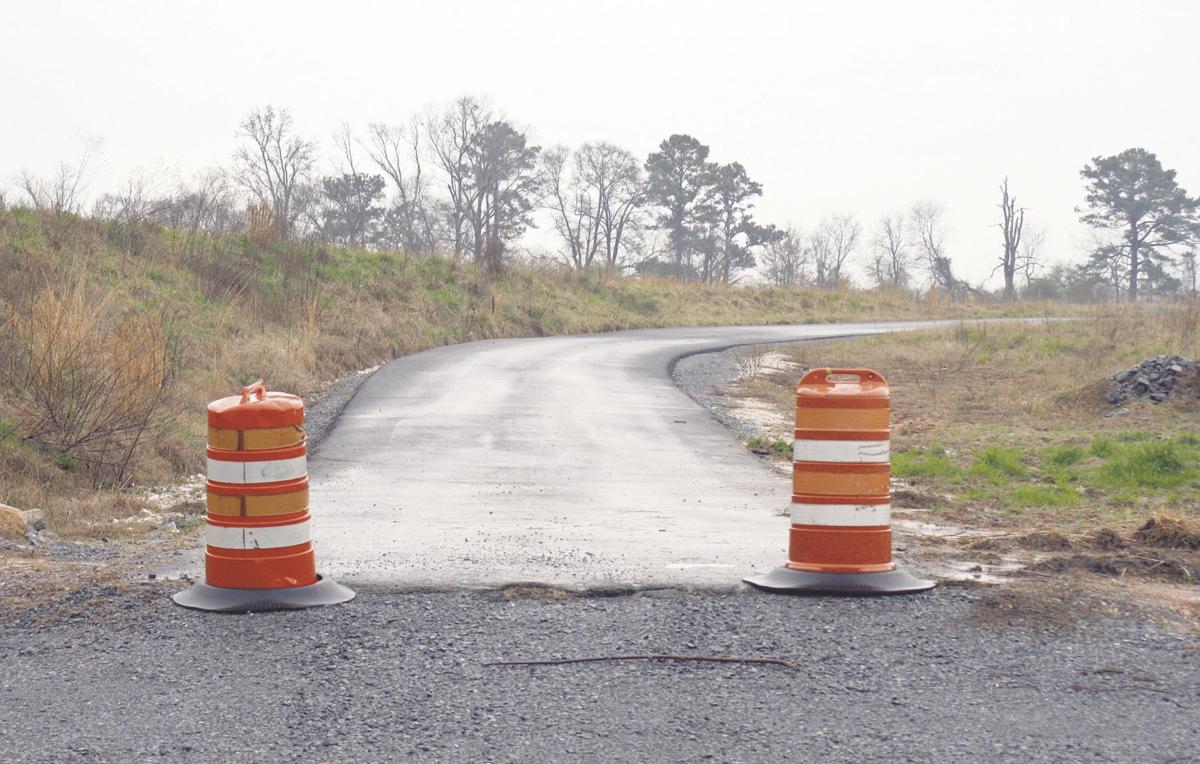 The entrance road to the North Floyd Industrial Park rail site off Ga. 140 has been empty of traffic due to the rainy conditions of the past couple of months. / Doug Walker 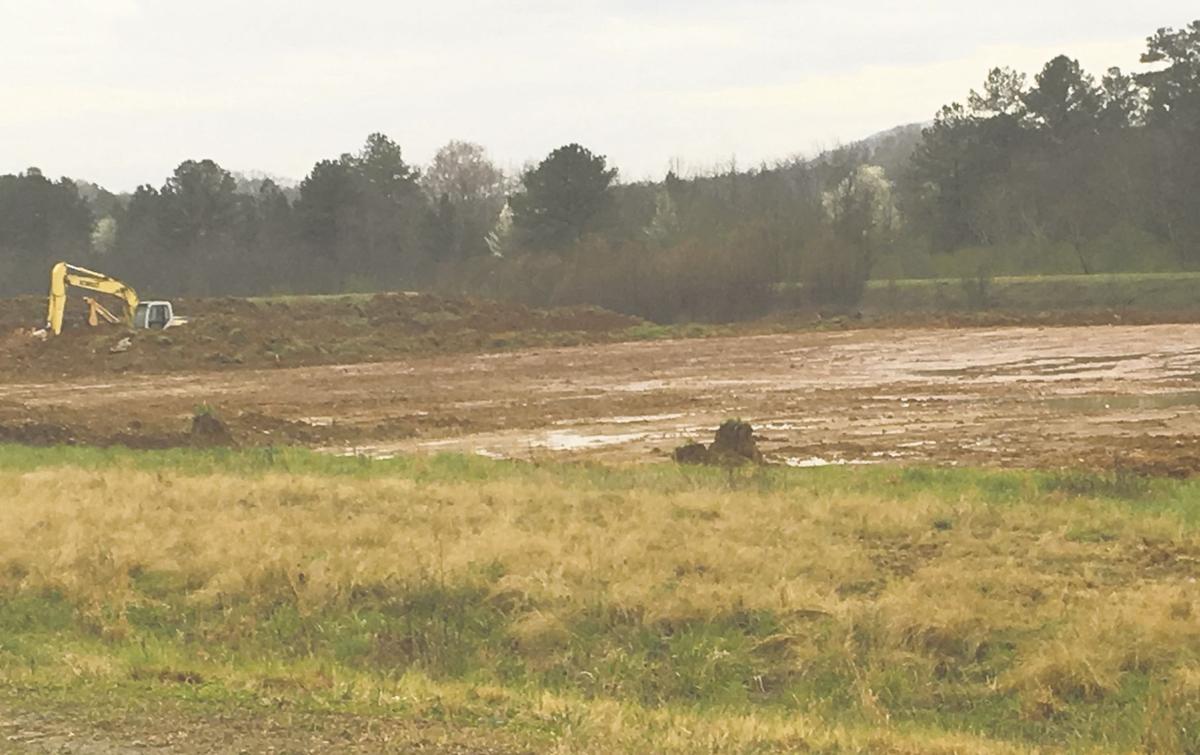 The pad for a new Southeastern Mills warehouse and distribution center in the Floyd County Industrial Park looks ready for foundation work once the soil dries out. / Doug Walker

Steel lies stacked up to the right side of this image, waiting for drier weather to begin setting the foundation for a new Southeastern Mills warehouse and distribution center in the Floyd County Industrial Park. / Doug Walker

The entrance road to the North Floyd Industrial Park rail site off Ga. 140 has been empty of traffic due to the rainy conditions of the past couple of months. / Doug Walker

The pad for a new Southeastern Mills warehouse and distribution center in the Floyd County Industrial Park looks ready for foundation work once the soil dries out. / Doug Walker

Economic development, or perhaps the perceived lack thereof, dominated headlines in Rome during the last quarter of 2018.

As community leaders flipped the calendar to 2019, the way Rome and Floyd County will handle industrial recruitment also turned a page.

The president of the Rome Floyd Chamber is no longer the point person for industrial recruitment. The Rome-Floyd County Development Authority has been charged with hiring a new chief recruiter and the authority itself will take more of an aggressive, up-front approach in industrial recruitment moving forward.

The change was not something that happened overnight, though the pace of action to facilitate the change caught some leaders, particularly those on the Rome City Commission, by surprise.

The Floyd County Commission endorsed the change almost immediately, as did the executive committee of the Chamber. However, the Rome City Commission slammed on the brakes, seeking more details about how the new model was going to work, how much it was going to cost and who was going to be responsible for footing the bill.

The change was announced by a task force of city and county officials, along with Pete McDonald, the chairman of the Chamber board and by virtue of that post, chairman of the Rome-Floyd County Development Authority, early in the fall. It was a change that was announced not long after longtime Chamber President Al Hodge revealed his plans to retire in April.

The task force originally suggested that an entirely new development authority be created to take the lead in the effort to bring new jobs to Rome and Floyd County.

It did not take members of the Rome-Floyd County Development Authority long to ask, “Why not us?”

The R-FCDA is a constitutionally-created authority which has the power to offer tax incentives, specifically payment in lieu of taxes, to bring new companies to town or help finance the expansion of existing companies. The authority has a treasury with a bank account with a bottom line well in excess of a million dollars. Jimmy Byars, Hardy Realty broker and R-FCDA member, suggested early on that there was no reason to reinvent the wheel.

A preliminary year one budget for the new office was pegged at around $450,000, with the development authority, city and county governments each chipping in about a third of the budget.

As things turned out, city and county leaders continued to fine tune the proposal and ultimately agreed that the R-FCDA ought to take the lead.

Now Byars, who has been selected to chair the agency this year, is part of an executive committee along with City Manager Sammy Rich and County Manager Jamie McCord as they lead the effort to find the point man to lead the recruiting efforts on a day-to-day efforts.

“That is going extremely well,” Byars said. “We have a game plan.”

He hasn’t ruled out the possibility of hiring a consultant to help with the search but does not believe that will be necessary.

“Rome has such a great reputation,” Byars said, which is helping in the search.

The executive committee is looking for someone who is a certified economic developer, knows state economic development leadership and understands the importance of working with the Chamber as well as city and county government.

“The other thing that is very important is that it is a person who is not afraid to cold call on industry that may not be thinking about Rome who we think may be a good fit for us,” Byars said. “We know that the state is going to generate most all of our large leads and we will react to that, but we also want somebody who can market Rome and be proactive about asking folks if they had ever considered Rome. Someone who is willing to reach out and say, ‘Here is what we’ve got to offer.’”

In addition to an executive director, the development authority expects to hire two other employees, a project manager and an administrative assistant. The tentative plan is to renovate a building that sits behind the Chamber to house the authority staff. That building is currently used by the Rome-Floyd County Fire Department.

So what role will the Rome Floyd Chamber play going forward?

Interim President Jeanne Krueger said the focus for the Chamber will be two-fold: workforce development and talent recruitment.

“We know that Baby Boomers are retiring,” Krueger said. “There are going to be more jobs that need to be filled in Rome and Floyd County. We want to make sure that students on high school and college campuses know of those jobs that are available and the great opportunities that are here.” She noted that is clearly the role of the Chamber, to connect future workers with existing jobs.

Krueger said the Chamber is well aware that the Baby Boomers who are retiring are stepping away from jobs with 30, maybe 40 years of experience, and so the Chamber will also work to make sure that programs like those at the local college and career academies are developing curriculum to meet the very specific needs of local industries.

When it comes to talent recruitment, Krueger said innovation and technology jobs are becoming increasingly important for the future.

“We know that innovation and technology kind of draws in more of those jobs. We have some great member companies right now, Hexalinks and Romega Digital are just two that come to mind, that are doing some really cool things,” Krueger said. “We feel like we can draw and attract other talent because of what they’re doing. Larger companies like OTR, Suzuki and Pirelli are also doing some incredible things.”

Krueger said the Chamber Board has a transition team in place that is seeking to find a full-time replacement for Hodge.

A message from the Rome Floyd Chamber

The Rome Floyd Chamber serves as the hub for the exchange of ideas, the promotion of innovation and technology, problem-solving discussions and thought leader advancement. The mission is to promote prosperity for and through the business membership. The chamber serves the business community through:

The chamber represents local manufacturers  through GREIA - Greater Rome Existing Industries Association and outlines its agenda to address their priorities. Rome and Floyd County have diverse manufacturers and their growth and expansions have continued to provide quality jobs in Rome and Floyd County. Education, transportation and workforce development are priorities and the Chamber continues to be involved at every level to be an advocate and partner. Business success puts people in restaurants, retail stores, healthcare entities and generates taxes which in turn support both school systems. Business success adds jobs to the Rome and Floyd County community.

Bottom-line Benefits for Small Business: Chamber members receive tangible savings through their business membership with the group health insurance plan offered to all Chamber members. The Drug Free Workplace program is offered to Chamber members thereby enabling members to save up to 7.5 percent on their workers compensation insurance. Chamber Advantage provides savings in the marketplace offering discounts to members, by members. The Chamber continues to provide seminars and workshops for small business members and also implements the EXPO business tradeshow each fall.

Chamber networking and connections for chamber members connection opportunities are available to the membership through Business After/Before Hours, Young Professionals, Non-Profit Roundtable, Technology and Innovation, and Education events such as the April 4th Confluence. Momentum magazine and www.romega.com promote Chamber members to the marketplace.

The chamber leadership through the Board of Directors and staff are committed to serving all 900 plus members to make certain every business thrives. The chamber continues to forge ahead as the catalyst for job growth and job creation as it serves its members by being a crucial part of the entrepreneurial ecosystem. The chamber is proud of Rome, Cave Spring and Floyd County; of the education offered here from PreK through college, the quality of life enjoyed by its citizens, the walkability of a vibrant downtown and the majestic greenways and blue ways, and finally through the employers and their employees. Rome and Floyd County has great jobs, great people and a great community…opportunity awaits.