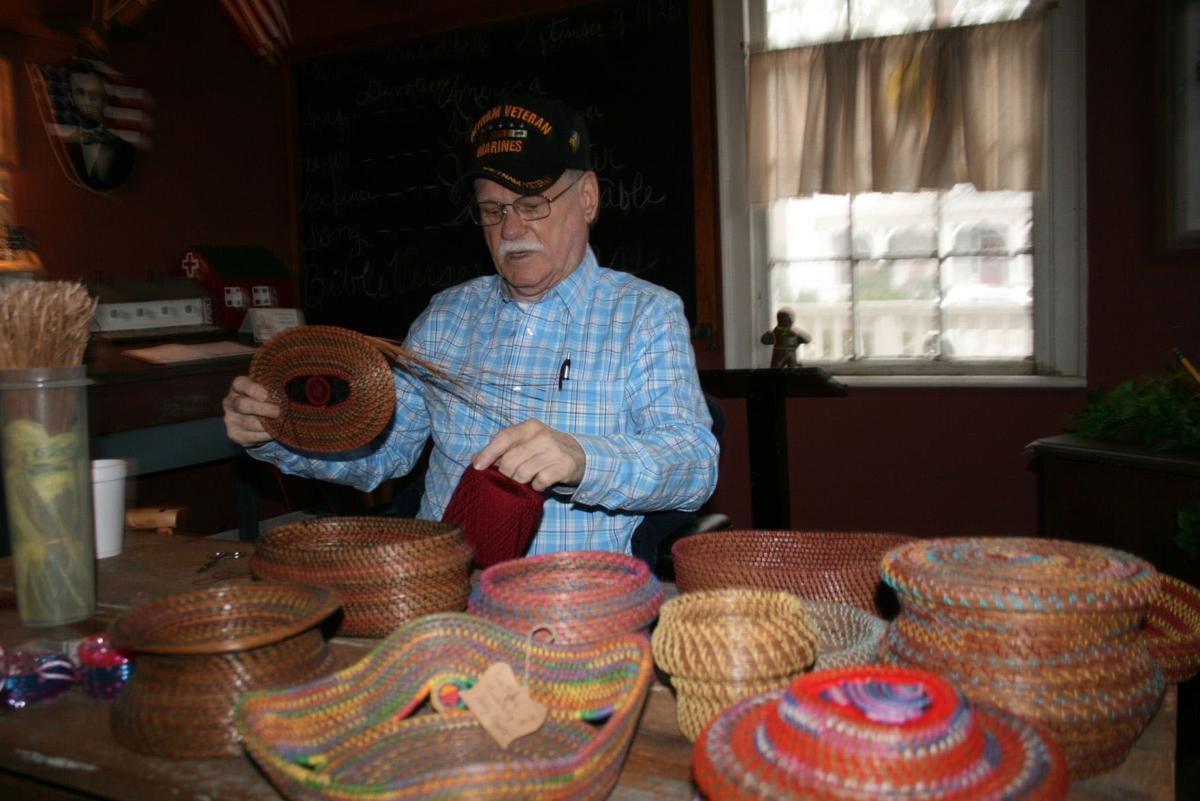 Rocky Boyett demonstrates pine needle basketry in the Fairview School room of the Cave Spring Welcome Center in February. The center at 4 Rome Road is open weekends from noon to 4 p.m. and often at other times as well. / File 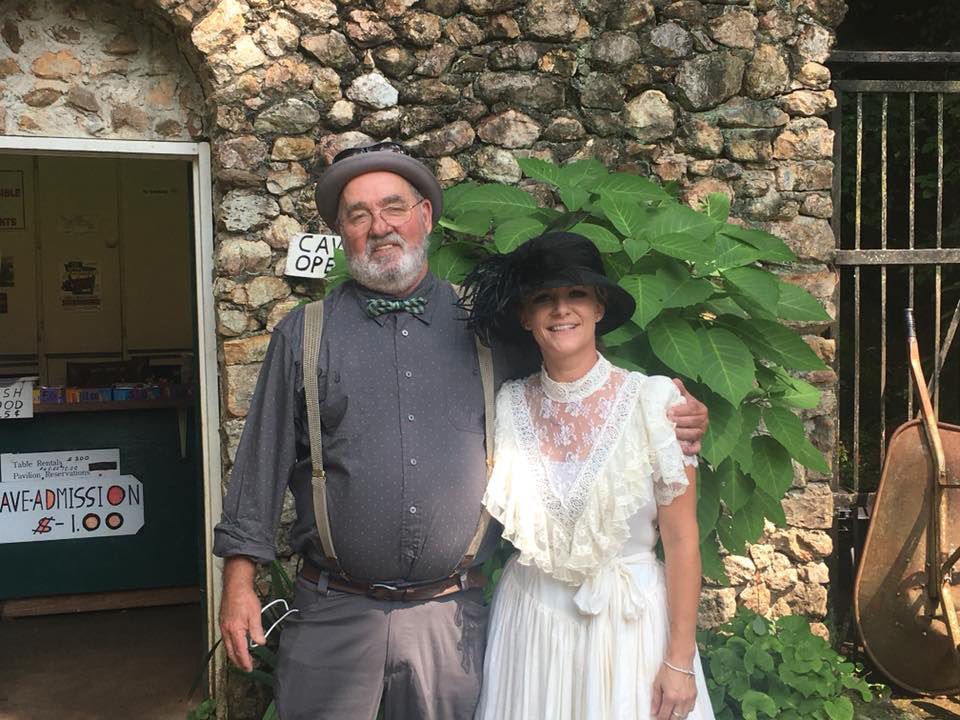 Billy Wayne Abernathy and Callie Fricks pose in front of the iconic Cave Spring cave dressed in the period garb they wear for riding tours of the historic small town. 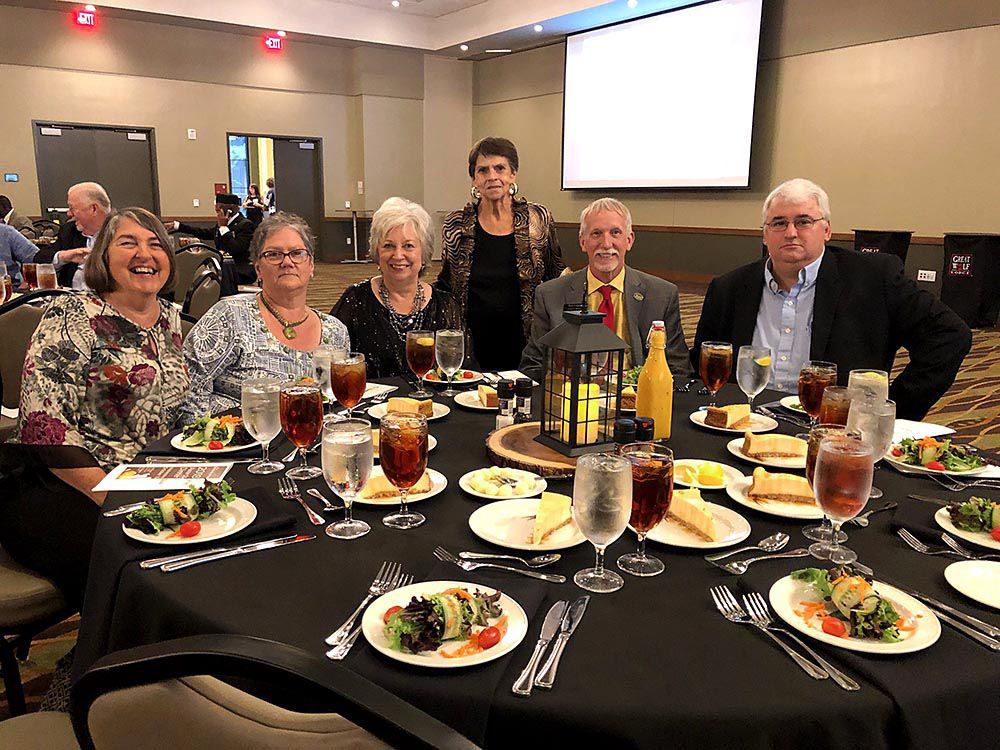 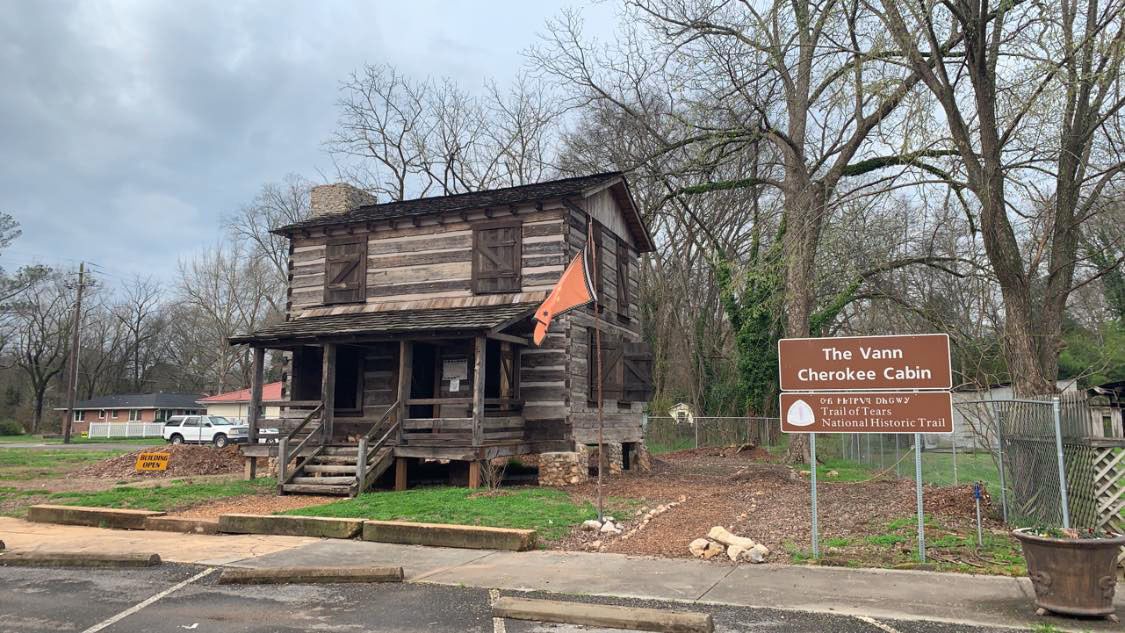 Tours are available at the historic Vann Cherokee Cabin which was moved to the edge of Cave Spring’s downtown district filled with antique stores, restaurants and specialty shops. / Contributed 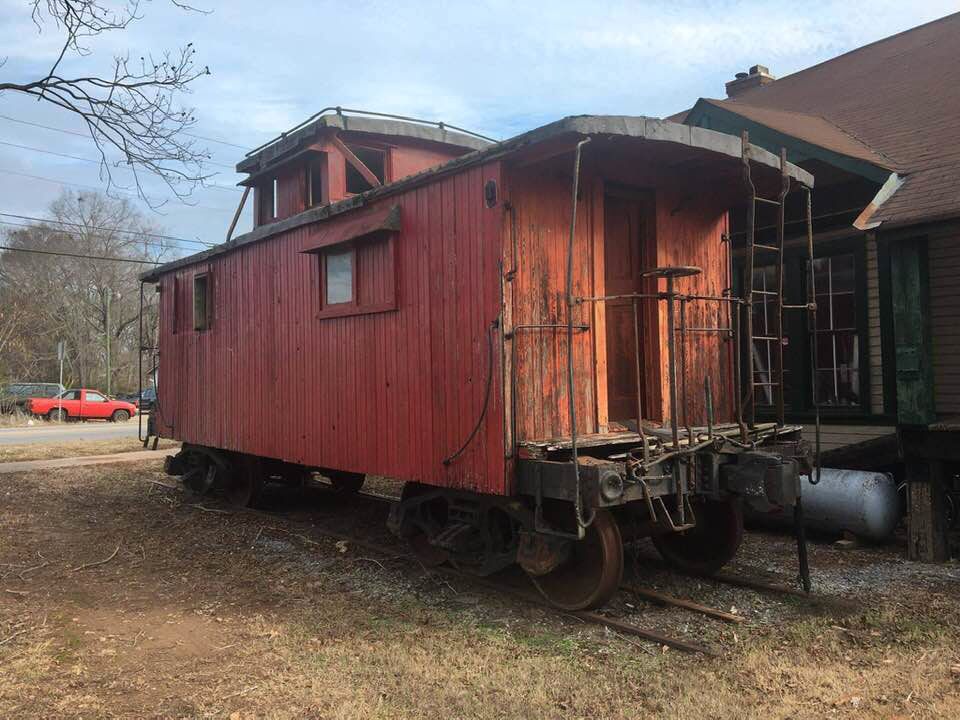 The Cave Spring Historical Society is fundraising to restore the Little Red Caboose and move it to the downtown district to spotlight the city’s railroad history. / Contributed 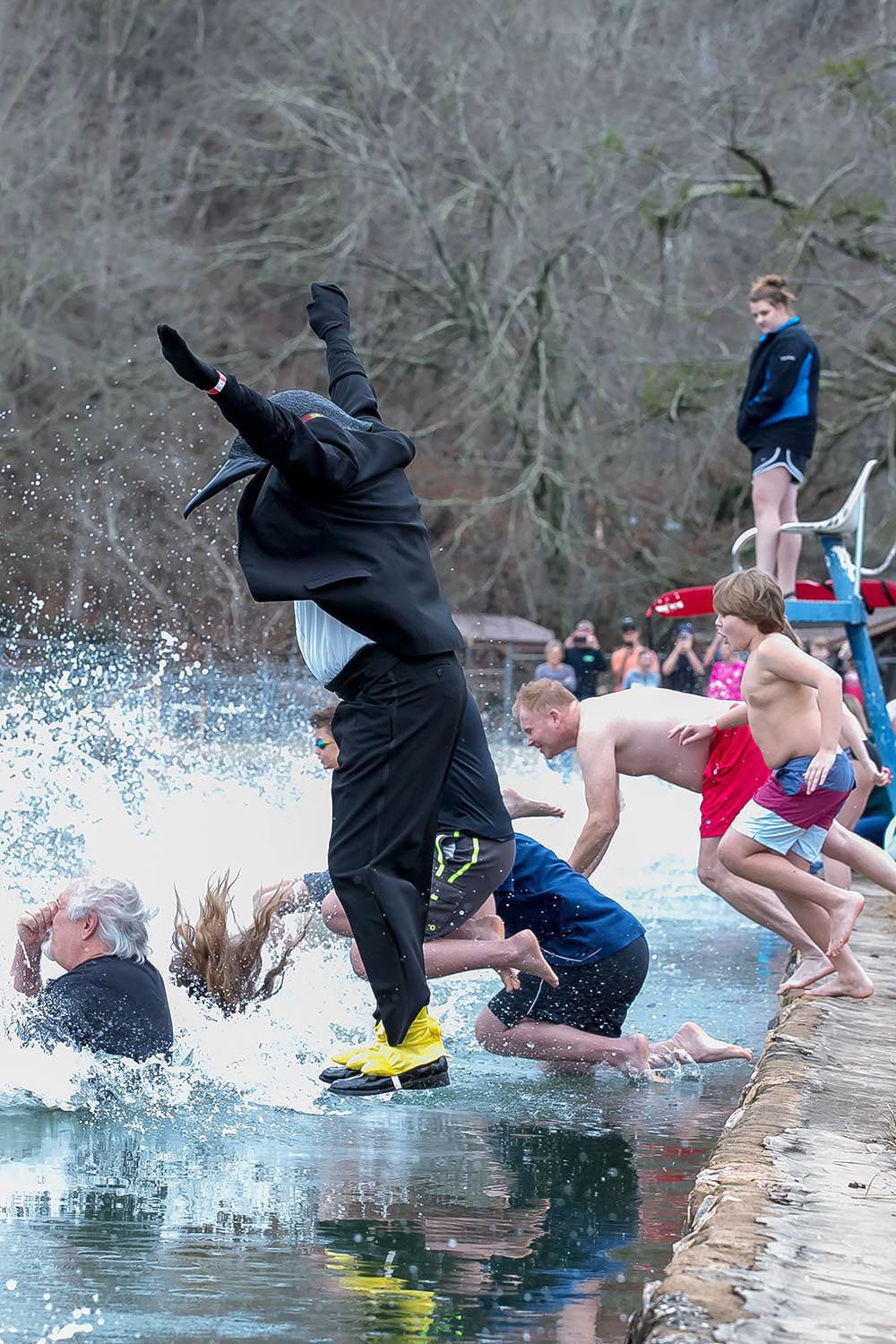 The Cave Spring Polar Plunge into Rolater Lake on New Year’s Day is one of the many quirky annual events the city hosts to draw visitors to the southern Floyd County community. / File 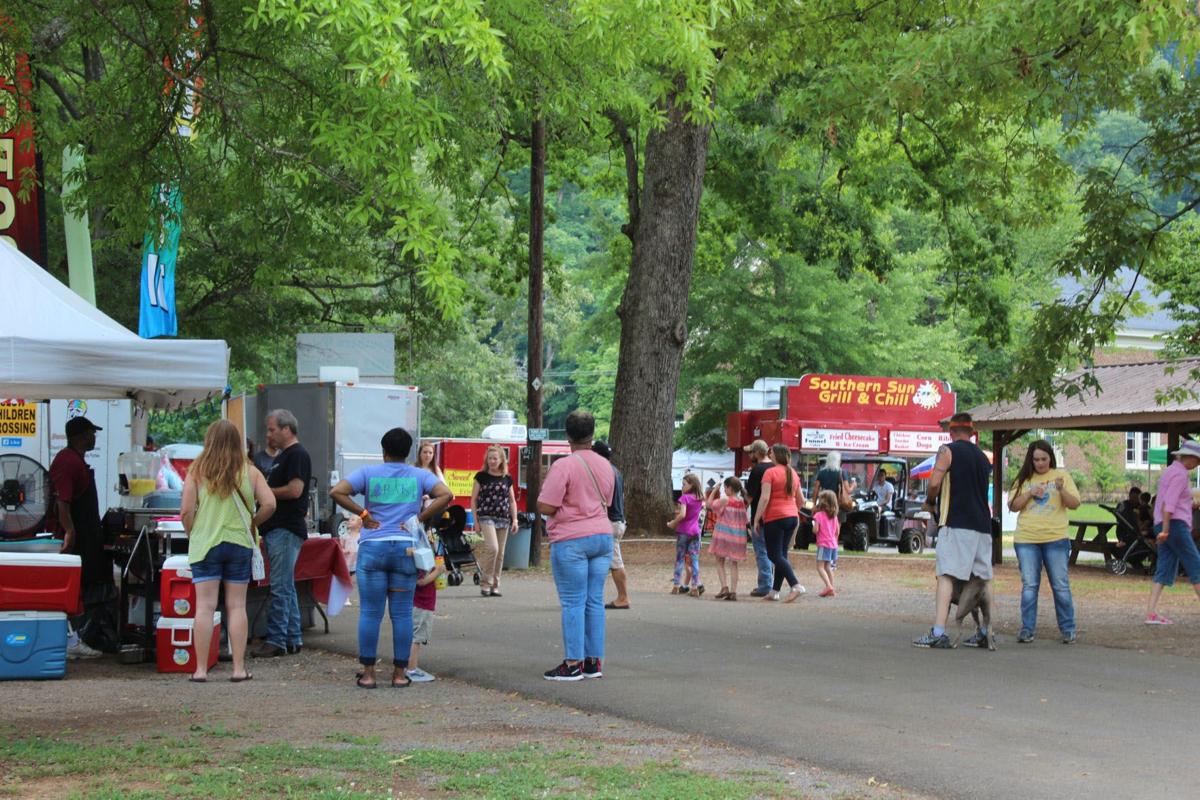 Rocky Boyett demonstrates pine needle basketry in the Fairview School room of the Cave Spring Welcome Center in February. The center at 4 Rome Road is open weekends from noon to 4 p.m. and often at other times as well. / File

Billy Wayne Abernathy and Callie Fricks pose in front of the iconic Cave Spring cave dressed in the period garb they wear for riding tours of the historic small town.

Tours are available at the historic Vann Cherokee Cabin which was moved to the edge of Cave Spring’s downtown district filled with antique stores, restaurants and specialty shops. / Contributed

The Cave Spring Historical Society is fundraising to restore the Little Red Caboose and move it to the downtown district to spotlight the city’s railroad history. / Contributed

The Cave Spring Polar Plunge into Rolater Lake on New Year’s Day is one of the many quirky annual events the city hosts to draw visitors to the southern Floyd County community. / File

The latest initiative underway in Cave Spring is the restoration of a Little Red Caboose to enhance the downtown district.

The tiny town of about 1,100 in southern Floyd County has ramped up its marketing efforts in recent years to draw tourists who swell its population — and its economic vitality.

Now, the Cave Spring Historical Society has a Facebook fundraiser underway to restore the wooden caboose and move it next to the 1830s Vann Cherokee Cabin.

“This move can help the town square prosper,” writes board member Callie Fricks. “Please, if you enjoy your town, help make this happen! No amount of donation is too small!! Great photo ops and great field trips!!”

Billy Wayne Abernathy, the board’s vice chair, said they set a goal of $10,000 but recently got a promise of an equal match if they can raise $5,000. A poured concrete pad with rails and ties will be needed at the new location, and the society will have to hire someone with specialized equipment to move the boxcar.

Plans are to use it to spotlight the city’s railroad history, as a mini-museum, but they’re still working out the details.

“One idea is for it to serve as a tourist spot for kids,” Abernathy said. “They can come and get their picture taken on the caboose and learn about the local rail lines. It could also serve as a souvenir shop.”

Established in 1832 at what is now the nexus of U.S. 411 and Ga. 100, Cave Spring boasts more than 90 structures on the National Register of Historic Places. and its namesake spring — which provides its drinking water — flows from a limestone cave in Rolater Park that is open for visitors.

The pure water attracted the interest of two businessmen and friends who had been mulling the idea of opening a craft distillery after Georgia passed legislation allowing them.

“It’s a lot like the caves up in Tennessee and Kentucky with limestone-filtered, award-winning water,” said Garrett Rothman.

He and Caney McStotts found a historic building downtown, next to The Peddler antique shop, to house the operation. It would be set up for tours, a sipping room and a shop. Cave Spring voters were deciding March 19 on adding liquor sales to their beer and wine alcohol ordinance. A citizen petition called the special election.

Downtown Development Authority Executive Director Sandra Lindsey said she was “super excited” when she was approached by McStotts and Rothman to help them with their plans.

“I had hoped that at some point someone would open either a craft brewery or a distillery. I honestly thought we would see a brewery first,” Lindsey said.

If the vote goes their way the men still have to do some rehab on the building and get state and federal permits but McStotts said they were hoping for an early 2020 opening.

Meanwhile, the reclamation of the old Fairview-E.S. Brown school campus is proceeding apace.

The original buildings were built in the 1920s for African-American children in Floyd County, with guidance from Booker T. Washington and financing from Julius Rosenwald, president of Sears Roebuck. Joyce Perdue-Smith launched a fundraising effort nearly a decade ago to save the historic Rosenwald school campus and turn it into an interpretive history center.

Work recently wrapped up on the lone remaining structure, the first-grade building, which was restored to the way it looked when it was added in the mid-1940s.

It was listed on the Georgia Trust for Historic Preservation’s Top Ten Places in Peril list in 2011.

The projects are part of a renewal and development effort that had been on shaky ground before the City Council committed — and found the funding — to rehabilitate the city’s aging sewer system.

The city was under an environmental consent order to repair the system or shut it down. There were frequent sewage overflows due to leaks that allowed extra water into the pipes.

Voters approved a $1,281,000 earmark in the 2017 special purpose, local option sales tax package, which helped board members leverage other funds.

The City Council also netted a $4.2 million combination grant and loan from the U.S. Department of Agriculture. The grant portion, just short of $1.9 million, can’t be tapped until the loan funds are spent. Most recently, they were awarded a $750,000 grant from the Georgia Department of Community Affairs.

“We’re in good shape on this one,” Councilman Tom Lindsey said. “We don’t have to pay this one back.”

Emergency repairs and engineering took place last year and the major upgrades — estimated at nearly $5 million — start this spring. Construction is slated to begin on the system itself while the treatment plant modernization plan is being designed.

Cave Spring dipped into savings to hire a grant-writing consultant to seek out funding options for the sewer repairs. Utilities are typically funded by ratepayers but the city’s system serves fewer than 1,000 customers — many on fixed incomes — and officials said the cost burden would be too high.

Mayor Dennis Shoaf’s campaign promise to clean up the city also started bearing fruit in 2018. Letters warning of code violations started going out to property owners mid-year and he said that, in most cases, that’s all it took.

Following that round of successes, the City Council created a committee to look at other dilapidated buildings in the city that should be addressed under the “clean it or lien it” policy. Another council committee is prioritizing sidewalks in the city for repair and rehabilitation with state grant money.

And through it all, citizen groups with council backing are continuing — and adding to — the schedule of seasonal special events that bring in visitors.

May 4 is the fifth annual Baconfest and Car Show, an arts and crafts festival and cruise-in with a bacon-tasting theme.

“Bacon ice cream, bacon sandwiches, bacon casseroles ... bacon on the grill. Somebody always comes up with something new every year,” Abernathy said.

The Spring Arts Festival, set for June 8 and 9, is the city’s oldest and largest festival — at least, so far. It’s approaching its 44th year of existence and featured 104 artisans last year. Mike Ragland, a Cave Spring author and historian, said organizers cut off vendor registration early and outright rejected about 65 applications.

“They were getting duplicates, and they’re not going to take anything commercial,” Ragland said. “I like that: ‘You don’t make it, we don’t want it.’”

The city’s patriotism also is on full display approaching the nation’s birthday, with celebratory fireworks scheduled for June 29 and the traditional Independence Day Parade on July 4.

The sixth annual Cave Spring Motorcycle Rally and Music Festival is set for July 26 and 27. The outdoor rally on Davis Drive acreage along Cedar Creek features a variety of events aimed at attracting not only the leather-clad associated with motorcycle culture, but also music lovers, foodies, and RV’ers looking for a weekend getaway.

Sept. 28 is the Cave Spring Pig Out & Car Show at Rolater Park to benefit the DDA. And Alton Holman Heritage Arts Inc. will be hosting its annual Rolater Regatta cardboard boat race on the lake.

On Oct. 12 and 13 the Georgia Mushroom Festival will mark its second year as a stand-alone festival in Rolater Park, and its first as a two-day event.

Last year’s festival drew professionals, hobbyists and interested bystanders and included vendors, walks, lectures, demonstrations and food. Councilwoman Nancy Fricks joined in, cooking up sausages and mushrooms so that visitors could have something to sample.

“These people come from all over ... Florida, Pennsylvania, it’s really educational,” Fricks said. “This is something we’re new to. They can tell you the medicinal purposes of mushrooms, how good they are, the ones you need to stay away from.”

Claudia Littrell, the festival founder, said she hopes to bring in several chefs this year who are experts in the preparation of the different varieties of edible mushrooms.

Oct. 19 is the annual Fall Festival and Nov. 9 is the city’s Christmas Open House downtown to kick off the holiday season.

Christmas in Cave Spring, however, starts in earnest Dec. 7 and 8 with the 16th annual Christmas in the Country arts and crafts festival. Over 150 vendors are expected, offering everything from canned goods to hand-crafted jewelry, wood-turned bowls, clothing, home décor and gift baskets.

Then the city will start its seasonal cycle of special events all over again New Year’s Day with its traditional Polar Plunge into the spring-fed Rolater Lake.

“We dress up as characters from different times of our history and tell the stories,” Abernathy said. “People don’t realize all these buildings go back to at least the Civil War, and each one has a story to tell.”

The Cave Spring section calls for encouraging more annexation of residential areas along Ga. 53, Mills Road and Spout Springs Road to attract younger families and improve the tax base for the elementary school.

Steps to achieve that goal include adopting the Rome-Floyd County Unified Land Development Code of zoning regulations, which the board is moving to consider in the coming months.