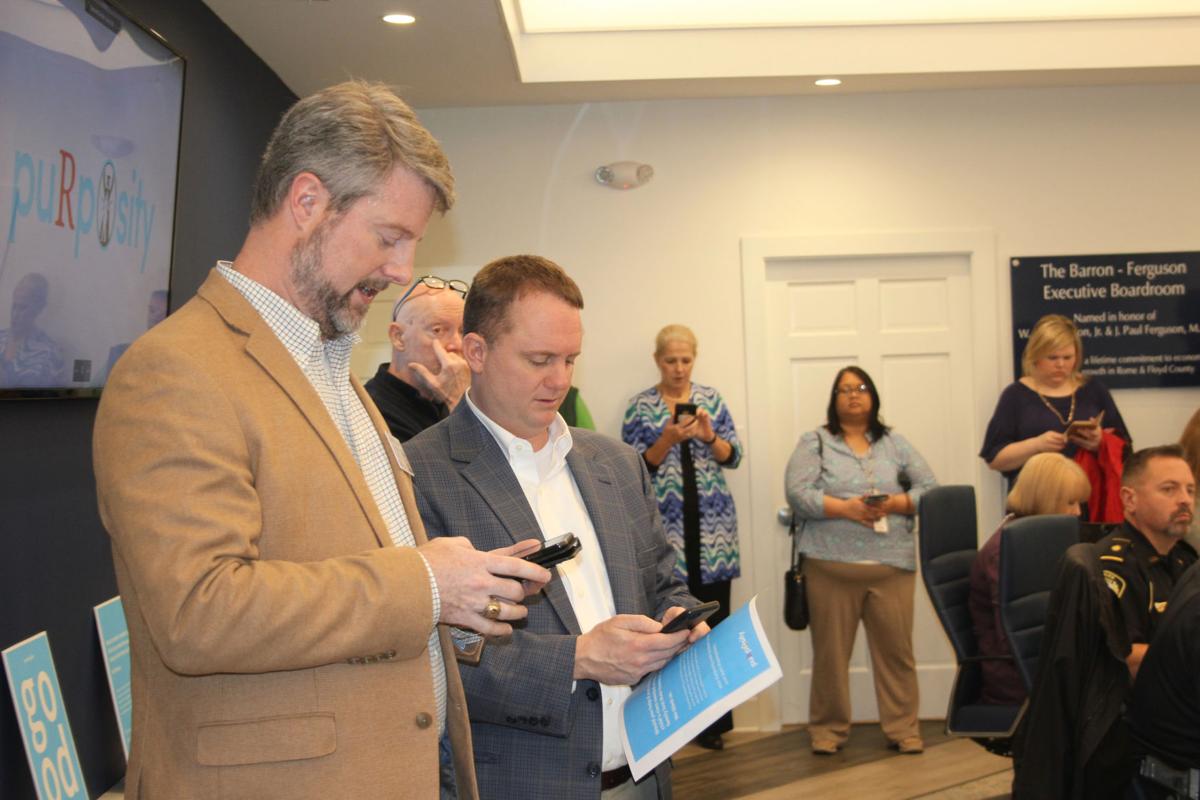 Rome City Schools board members John Uldrick (left) and Will Byington both download the Purposity app to their phones Friday morning at the joint launch between Rome City and Floyd County schools. The app will put the needs of local students at the fingertips of the community. / John Popham 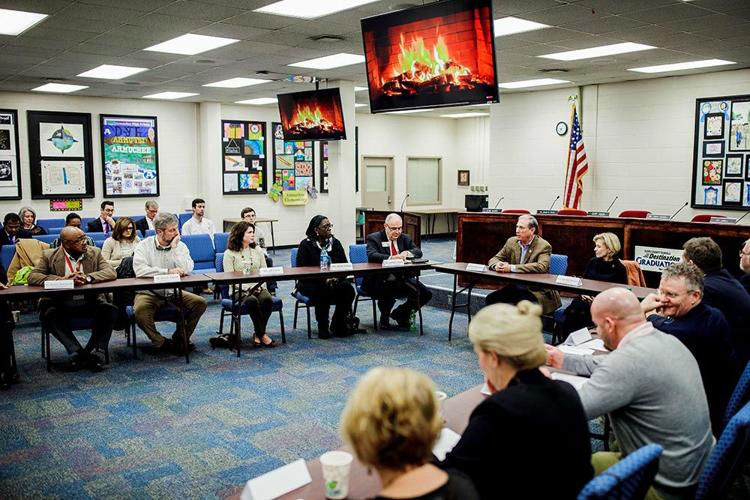 Rome City and Floyd County schools both met in a joint board meeting to share their comments and concerns with recently elected legislative officials. / Rome City Schools 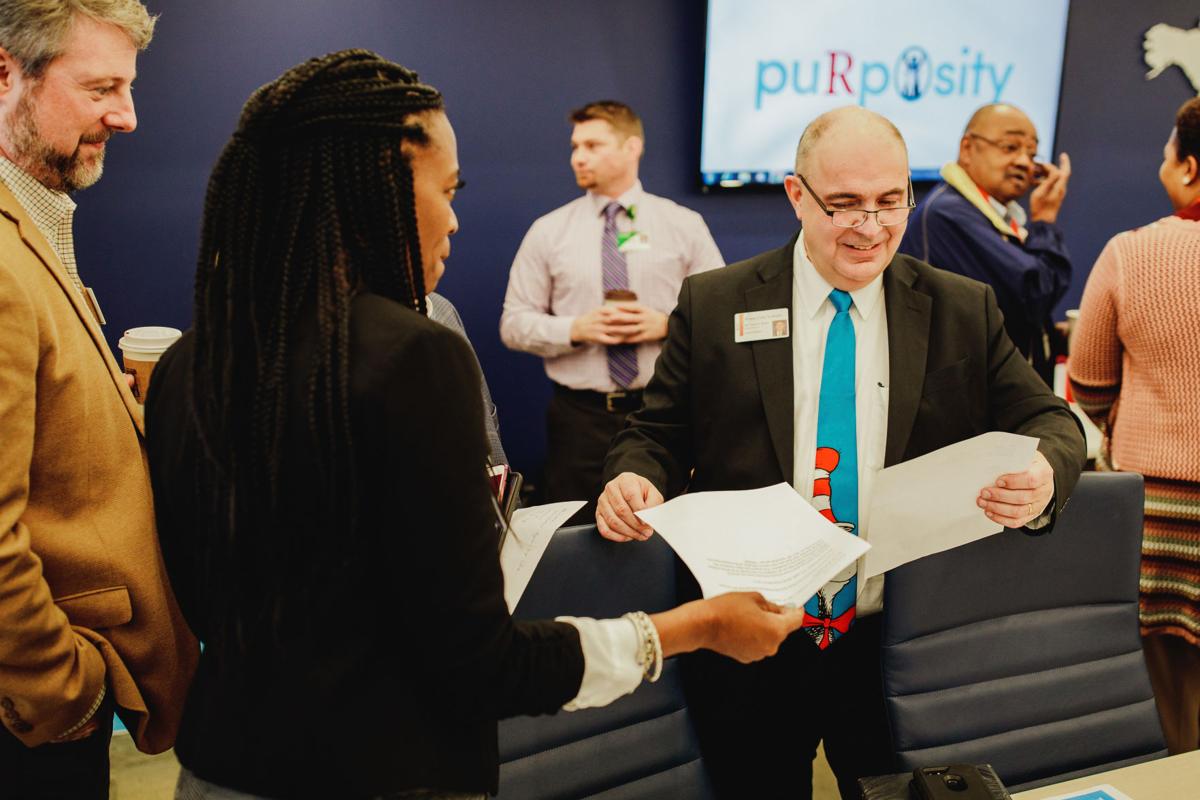 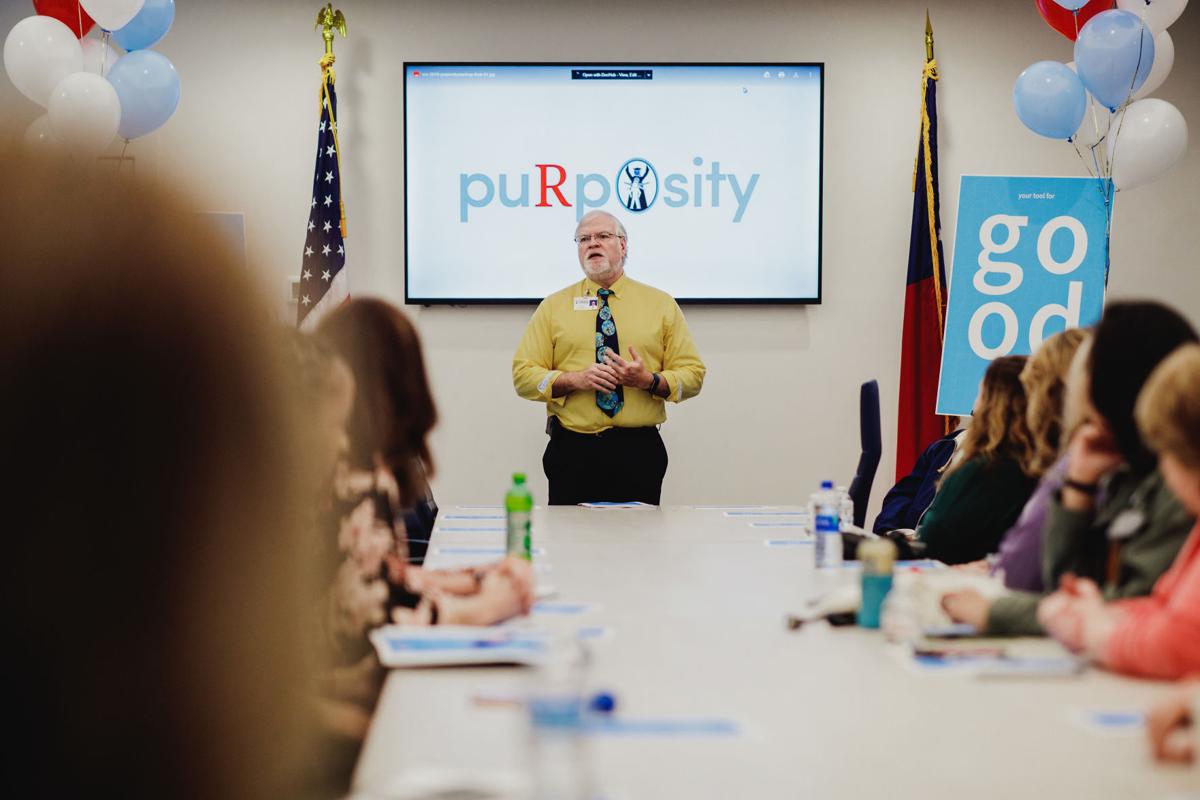 Rome City Schools board members John Uldrick (left) and Will Byington both download the Purposity app to their phones Friday morning at the joint launch between Rome City and Floyd County schools. The app will put the needs of local students at the fingertips of the community. / John Popham

Rome City and Floyd County schools both met in a joint board meeting to share their comments and concerns with recently elected legislative officials. / Rome City Schools

City and county schools have both spent the last year working to improve the lives of students and community members through various partnerships around the area.

Recently the two systems came together to announce a partnership with the Purposity app which would allow community members to meet student needs immediately and privately. The joint effort began when social workers from the two local systems found the program and saw it being used in nearby districts, Superintendent of Floyd County Schools Jeff Wilson said.

“We get calls all the time with people or groups asking what can we do for you,” Wilson said. “We have been trying to find a way to get students something without identifying the students.”

“It doesn’t say the kid’s or school’s name,” Rome City Schools Superintendent Lou Byars said. “Anyone in the community who is signed up for the app can fill those needs.”

The two school systems also met with lawmakers in December to discuss local school needs and what they would like to see go through the Georgia General Assembly.

Resources for mental health counseling and school safety were a big topic since at the time there were few or none of those resources. Since Governor Brian Kemp took office he has announced he will be dispersing $30,000 to every public school in the state for school security.

“Our first deal for safety is to get resource officers for each school,” Wilson said for Floyd County Schools. “If it does happen, I promise it will go to good use.”

He said having more resource officers would make it more difficult for someone to attack a school. The Floyd County School board would have to talk about preferences, but Wilson said he would like to see as many resource officers in the schools as possible. There will also be upgrades made as needed, he added.

The budget containing the school security funds has not been signed by the governor as of the beginning of March 2019.

Rome City Schools put together a committee to examine school security and find ways in which it could be improved. The committee was made up of officials from the Rome Police Department and the Georgia Emergency Management Agency, along with board members, administrators and stakeholders in the community.

During a March 2018 safety forum, student representative Caroline Young, a junior at Rome High, called on Rome City Schools officials and stakeholders to be advocates for the younger generation in pushing gun control measures and preventive actions. Board member Melissa Davis supported Young’s statements by saying gun violence in America is a public health crisis.

Last year, the city school system installed bar-code readers at each school. To open a door, a programmed card must be placed before a reader for it to unlock. Buzz-in entry systems with cameras have also been put in at schools. Schools also have radios that are connected to the Floyd County 911 network.

Floyd County Schools has focused on partnership and teamwork in its school security strategy. Upon beginning his role as chief safety and security officer in late January, Rick Flanigen said he visited each of the county’s schools to meet with principals and staff to see what their security needs might be. The principals and staff have shown great interest and dedication he said, asking “How can we do this safer? How can we do this better?” Developing the human element is important, Flanigen said. “School teachers and staff are our greatest resource and safety.”

Both county and city school systems tried out pilot programs to keep students engaged with their school work from home through an online learning day which they piloted during a called snow day at the end of January.

“This is a good plan in place when kids don’t report to school,” East Central Elementary School Principal Kristin Teems said of Rome City Schools Flexible Learning Day. “We are going to always err on the side of safety.”

Rome City Schools announced it would have a Flexible Learning Day when forecasts by the National Weather Service showed snow and Gov. Brian Kemp’s office ordered all state offices to be closed the next day. According to Teems, in preparation for the Flexible Learning Day the system had coaches and teachers create a menu of tasks and activities for students to complete at home in case of an inclement weather event that would cause the schools to close.

Floyd County Schools piloted a Digital Learning Day for students which Pepperell High School Principal Jamey Alcorn said “went really well.” Alcorn said he had several teachers come to him after the Digital Learning Day to tell him how well the program worked for their students. Having a 1-1 student to Google Chromebook ratio also helped he said. Pepperell High School senior Eva Ellenburg said she was still able to FaceTime with her AP Seminar class and overall the day was very beneficial to her. Pepperell Elementary School Principal Teri Pendley said learning was still kept going even though schools did not meet physically.

Floyd County Schools used a $466,650 grant they received from the Governor’s Office of Student Achievement in January 2018 for Chromebook purchases, furthering its one-to-one initiative.

“This money should allow us to complete our 1-to-1 Chromebook project including buying new devices for schools, providing backup devices for schools, and replacing some older devices that are soon to reach end of life,” said Craig Ellison, executive director of technology, said in a weekly newsletter.

According to the newsletter, Ellison and several members of the technology department wrote the grant application, along with compiling data and determining how to implement their plan. The system has earned $520,175 through prior rounds of the grant for purchasing Chromebooks, and the Floyd County Board of Education has set aside funds for this purpose. The system began buying Chromebooks in May 2012 and through receiving the grant it completed its 1-1 ratio across the board.

In October East Central Elementary unveiled its We Care Service Center which offers school supplies, food, clothes and media center resources for school families in need. The care center is comprised of four components, including a care closet which offers clothing from adults to toddlers. It holds school supplies for any student who comes to school without them, as well as food to send home with kids over the weekend to make sure they have proper meals. Finally, in the corner of the center are two stations with Macintosh computers that are reserved for parents who need to use them to look for a place to live, send in job applications, or any other necessity that would benefit their family.

Just down the hall from the care center is the school’s food pantry full of non-perishable uneaten food that would normally be thrown away. This project began when second grade teacher Faith Cole saw the staggering amounts of food that was being discarded and wanted to redistribute it to children who needed it. They then got in contact with the organization, Helping Hands, who helped them work out the legality of their food pantry and even arranged for a milk refrigerator to be placed in the care center. Cole said that 400 pounds of food was regularly being wasted, but is now being redistributed to students and families who need it.

“It’s a great idea, I hope every school will take that initiative,” Alvin Jackson of the Rome City School’s board of education said during a tour of the facility in October. “That is a lot of food to be thrown away.”

Looking forward to the future the two superintendents had some thoughts on where they would like to see their systems in the coming calendar year and beyond.

Wilson, who will be completing his first full year as superintendent in 2019, said he wants to see more dual enrollment opportunities for Floyd County students. The goal is to have kids who are leaving high school with college credit heading into a two or four year college he said. He would also like to see Floyd County students get more internships and graduate high school work ready with work experience.

Byars is anticipating the beginning the system’s College and Career Academy. The CCA will give students the option of choosing between 25 different career pathways and offer state of the art classrooms and learning centers. Byars said he would also like to see teacher technology — such as smart boards — updated as well. Energy efficient lighting installed in the schools which would cut energy costs as well as impact the environment is also a goal of his for the upcoming year.