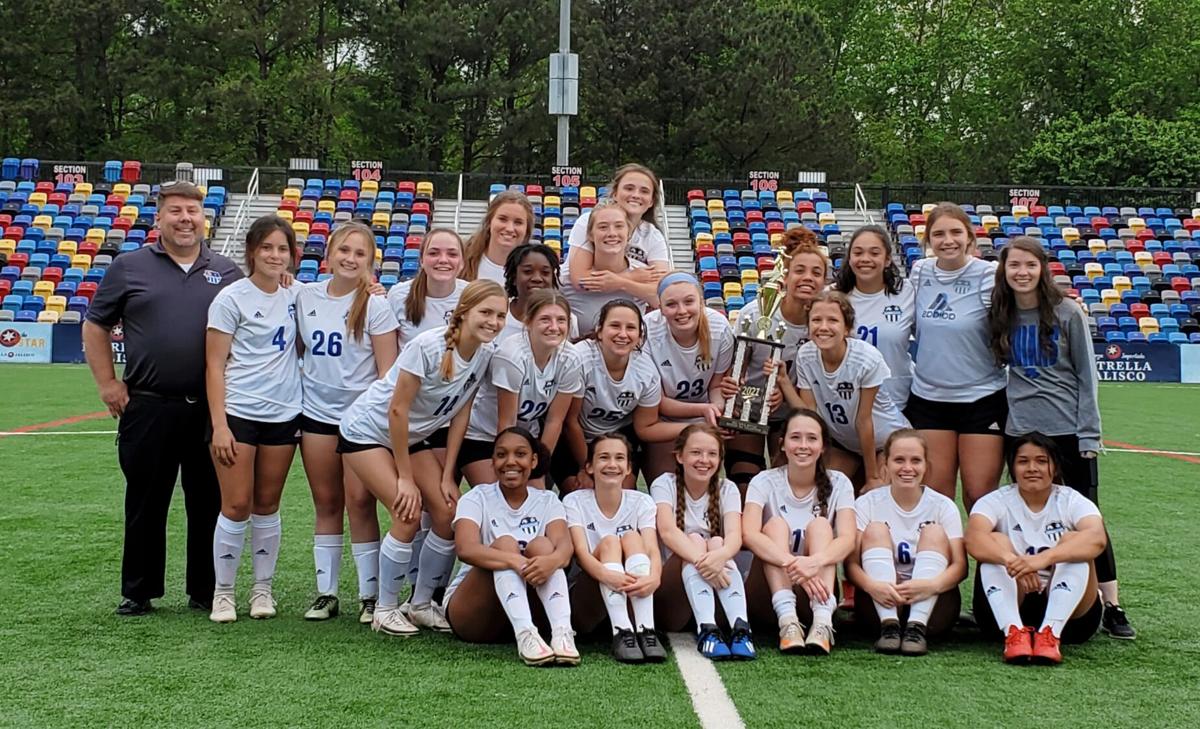 The Armuchee Lady Indians pose for a picture with their newest trophy after a 2-1 overtime win over Atlanta Classical Academy that captured the Region 6-A Public crown.

The 2021 Region 6-A Public Championship trophy with the scoreboard depicting the final score of the Armuchee-Atlanta Classical game visible in the background.

The Armuchee Lady Indians pose for a picture with their newest trophy after a 2-1 overtime win over Atlanta Classical Academy that captured the Region 6-A Public crown.

The 2021 Region 6-A Public Championship trophy with the scoreboard depicting the final score of the Armuchee-Atlanta Classical game visible in the background.

In battles with everything on the line, stars step up and deliver.

Armuchee’s Malone Christen did just that Friday, scoring three minutes into double overtime as the Lady Indians claimed their first-ever Region 6-A Public Championship 2-1 over the Atlanta Classical Academy Cavaliers. The road win gives the Armuchee girls (10-4, 5-0 Region 6-A Public) the No. 1 seed in the Class A state playoffs and a first-round bye to the Sweet 16.

“It’s kind of hard to describe,” Lady Indians head coach Don Bettler said. “It’s the first team we’ve had do that. I have a strong group of seniors ... that show leadership on and off the field. You just get a team like that every now and then and this is that year for us, so it’s a great feeling.”

It’s only fitting the game needed extra time to determine a winner. Deadlocked at 1-1 after regulation, neither team wanted to make that one fateful mistake that could be the difference between a region title and runner up, a first-round bye and a home game on Tuesday.

“We’ve got to dig down and find the heart here,” Bettler said on his team message in between 10-minute overtime sessions. “Both teams are tired, but if you’re going to get it, it’s going to take heart. Find your heart and take it to the end of the game.”

Christen took that message to heart. From inside her defensive end, the sophomore charged downfield, stole the ball away from a defender, got a solid touch on the ball and placed a high shot over Atlanta Classical’s goalie to send Armuchee’s players and traveling fanbase into pandemonium.

“I really block everybody out so I can’t really hear anything,” Christen said. “As I was dribbling, I knew that I had space and I had time because my team would tell me if I had a man (on me), so I just kicked it and it went in.”

“She’s a forward and drop down in deep defensively,” Bettler said. “(She) doesn’t have the ball, but she recognizes and she makes that run deep in the other half all the way, puts a nice touch on it and just lifts it up over their keeper.”

Atlanta Classical had the momentum as the second half drew to a close and overtime began, but Armuchee kept level heads throughout.

When the final horn sounded, the celebration was on, featuring hugs, smiles and plenty of pictures.

“This is the first time we’ve gone as far as we have, so it’s really good that we need to keep our heads and keep the team going and stay with it,” Christen said. “I’m glad we stuck together and just kept our heads and came out with the win.”

After their opening-round bye, the Lady Indians will play Region 8’s No. 2 seed Social Circle (also on bye) at Armuchee High School on Monday, April 26. A kickoff time has yet to be determined.

WASHINGTON (AP) — The federal government will protect gay and transgender people against sex discrimination in health care, the Biden administration declared Monday, reversing a Trump-era policy that narrowed rights at the intersection of changing social mores and sensitive medical decisions.

THE VILLAGES, Fla. (AP) — U.S. Reps. Matt Gaetz and Marjorie Taylor Greene, two of the Republican Party's most controversial figures, kicked off their “America First Rally" roadshow Friday with a Trump-centric revival of sorts for the MAGA faithful at a Florida retirement community.

Gov. Brian Kemp has through Monday to sign or veto legislation passed by the Georgia General Assembly this year, or the bills automatically become law.