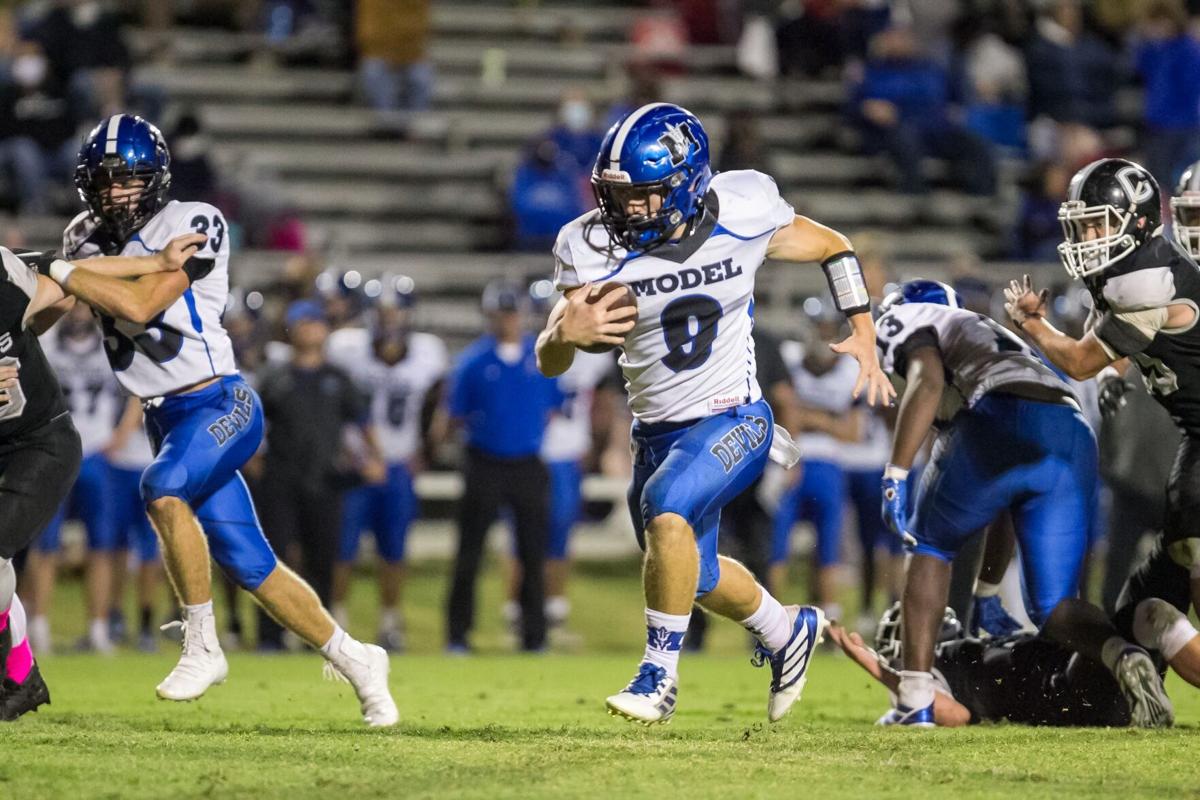 The Model football team celebrates its first-round playoff win over Washington at Grady Stadium in Atlanta.

The Model football team celebrates its first-round playoff win over Washington at Grady Stadium in Atlanta.

In front of an empty stadium, the Model Blue Devils had plenty to cheer about as they advanced to the second round of the state playoffs following a 28-14 victory over the Booker T. Washington Bulldogs Saturday in Atlanta.

“It feels great for these seniors,” Hunnicutt said. “We’ve been through a lot during the pandemic. On top of it, didn’t know if we were going to have a season, and here we are getting to play ... now 12 games.”

Quarterback Sam Silver’s three touchdowns and a defensive second-half shutout saw Model prevail in the first round of the state playoffs.

Model’s offensive yards throughout the night came from senior running back Joseph Wallace, racking up 31 carries for 192 yards and a touchdown. Wallace accounted for 70% of offensive touches.

However, Hunnicutt gave a “hat’s off” to the offensive line, as they greatly influenced Model’s run game.

Washington began the game with a 14-play drive, taking 6:08 off the clock. Bulldogs quarterback Monye’ Jones found receiver Armani Tookes in the left corner of the end zone to cap off the drive.

Model responded on its offensive possession, but taking less time to do so with a 5-play, 66-yard touchdown drive as Silver scored his first of the day. The extra point gave Model it’s first lead at 7-6.

The Bulldogs’ offense crafted another scoring drive, as Jones spotted senior receiver Ronnie West in the right corner of the end zone from 26 yards out. A 2-point conversion made it 14-7.

Model’s offense needed nine plays, including a 40-yard dash from Wallace, to set Silver up for his second TD.

At halftime, the score stood at 14-14. The first half lasted just 47 minutes of real time.

The second half belonged to the Blue Devils. While Washington’s Jones was 11-of-14 passing for 135 yards and two touchdowns in the first half, Jones was 4-of-13 for 40 yards with one interception in the latter 24 minutes.

“We didn’t make a whole lot of adjustments,” Hunnicutt said. “We challenged our kids on our pad level and our basic fundamentals. In the grand scheme of things, it all comes down to that. We just ask our kids to read, react and run with reckless abandonment. I thought we had some fun doing that in the second half.”

Meanwhile on offense, Model took a permanent lead when Wallace scored his lone touchdown with 5:39 to play in the third quarter. Wallace now has nine rushing scores in a span of 11 days.

“The kind of kid that Joe is, he’s giving all the credit (to the offensive line),” Hunnicutt said. “He doesn’t care about his stats and never has. He comes to work the same way every day.”

Silver’s final rushing score of 1 yard about halfway through the fourth quarter gave the Blue Devils the breathing room they needed.

While spectators were not allowed at the game due to district policy, Hunnicutt expressed his emotion as he looked forward to arriving back at Woodard-Tuggle Stadium.

“Without the community, it made it hard and our kids responded in a manner that as a father and as a coach should be proud of,” Hunnicutt said. “To enter a game like this and never before have we experienced this ... you normally can’t talk to kids like you could tonight.”

The Blue Devils now prepare for another road battle at Class AA No. 2-ranked Rabun County Wildcats on Friday at 7:30 p.m. Rabun County is 10-1 on the season, coming off a 35-7 first-round playoff win over Haralson County.

“I challenged our kids let’s be one of 16 (teams) and we’ve got to take this one week at a time,” Hunnicutt said. “I don’t care where we’re going ... I’m excited we get to spend another week with this group.”

EXPLAINER: Italy faces a political crisis amid a pandemic