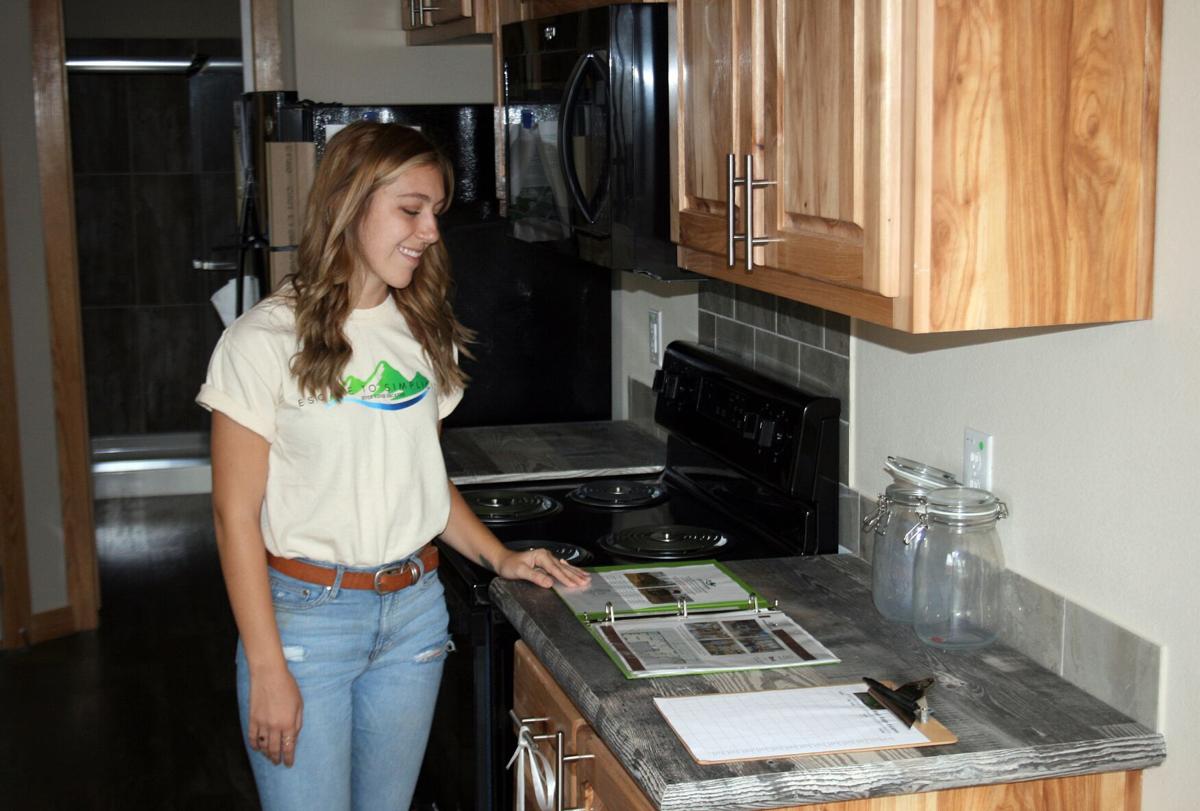 River Ridge Escape tiny home sales director Emmye Holbert gets a kick out of a question about some of the specs. She said most visitors find they really could live in 400 square feet of space. 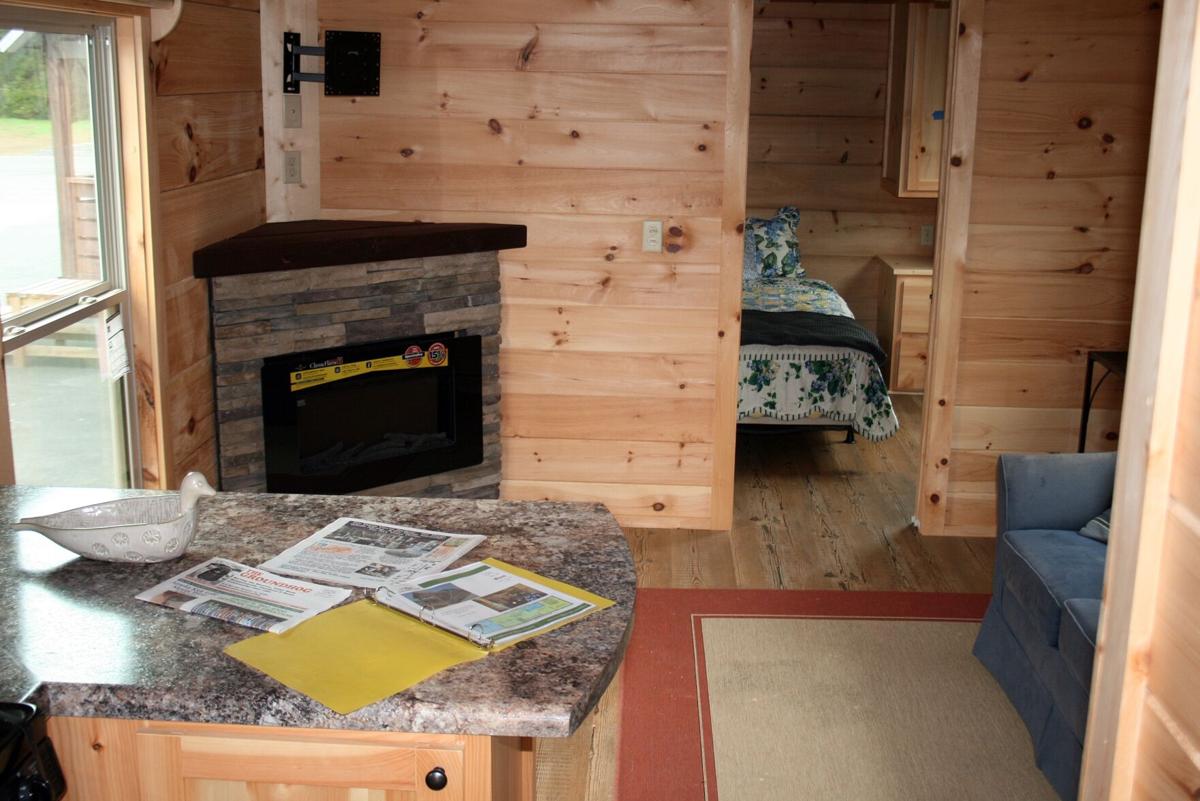 The relatively spacious interior of most tiny home models surprises many of the visitors to the River Ridge Escape sales lot in Menlo, according to marketing executive Emmye Holbert. 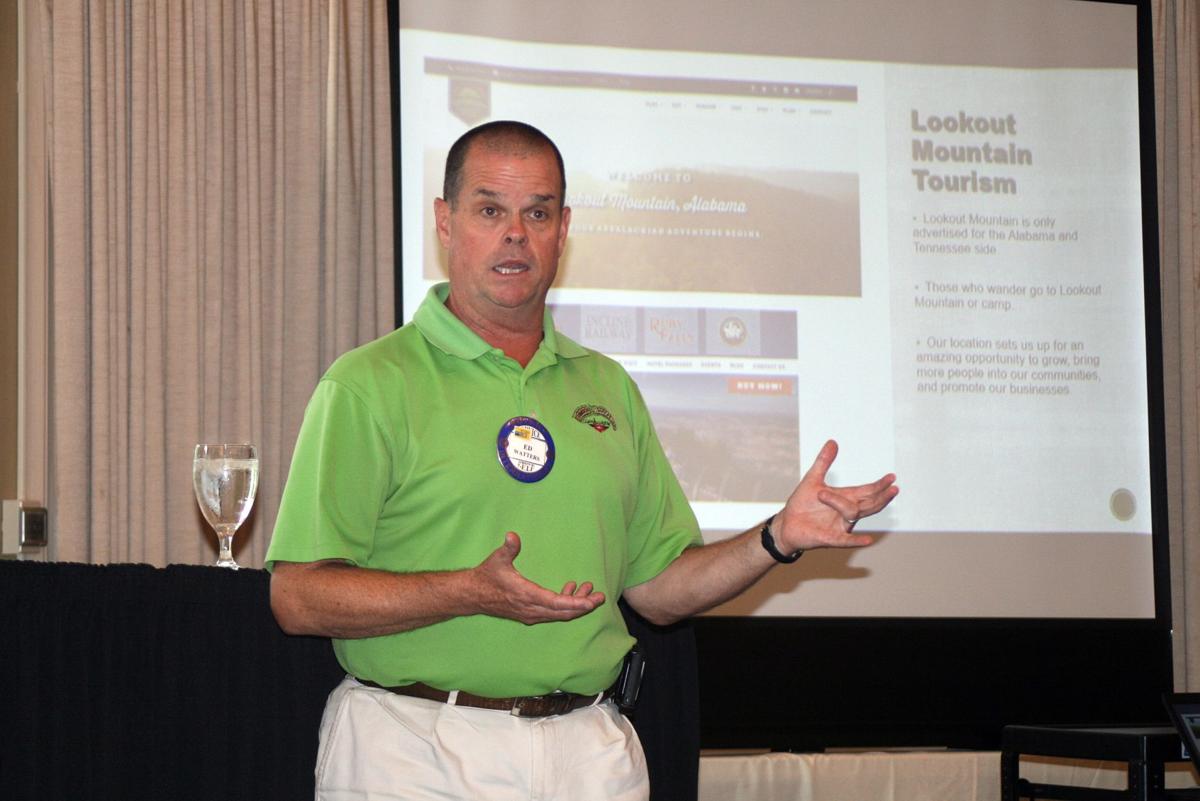 Ed Watters, owner of Little River Escape on Lookout Mountain, is turning his full attention to expansion of his tiny home business. 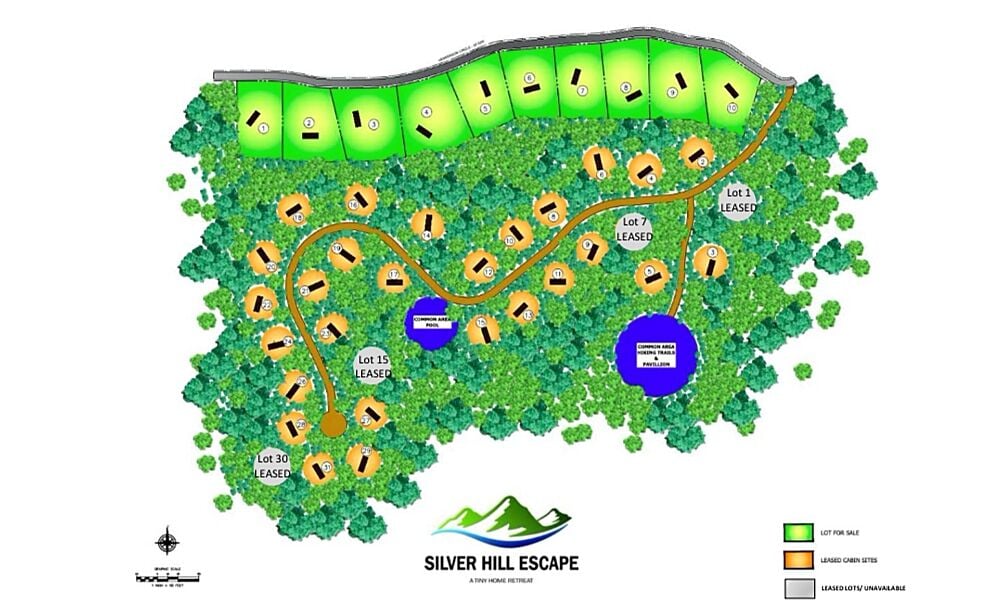 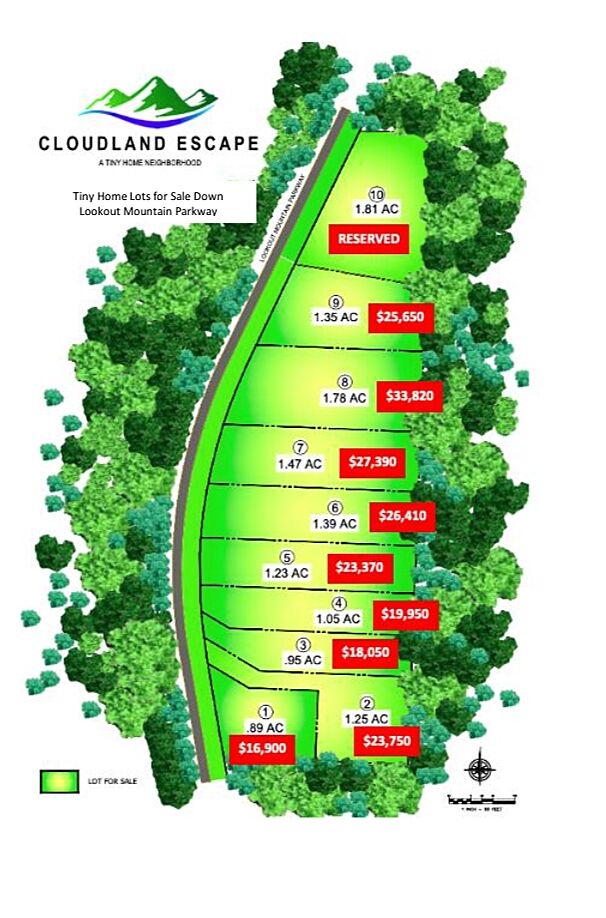 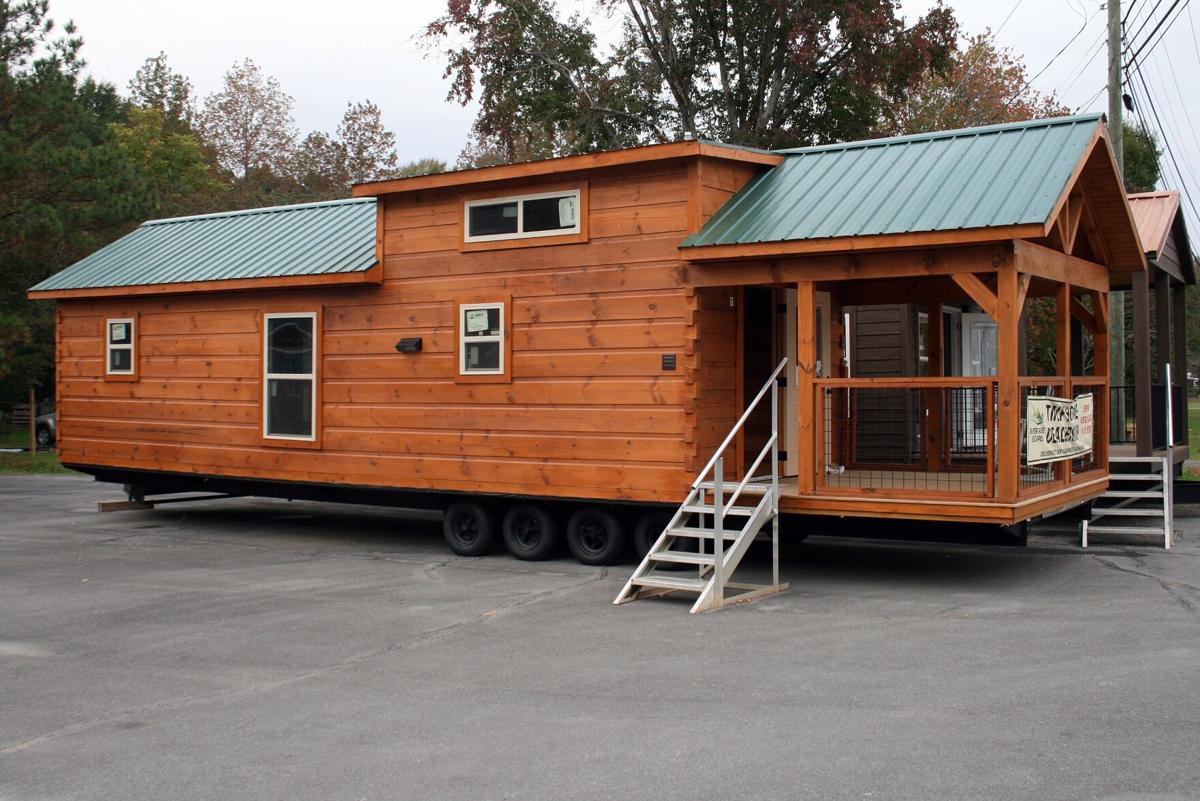 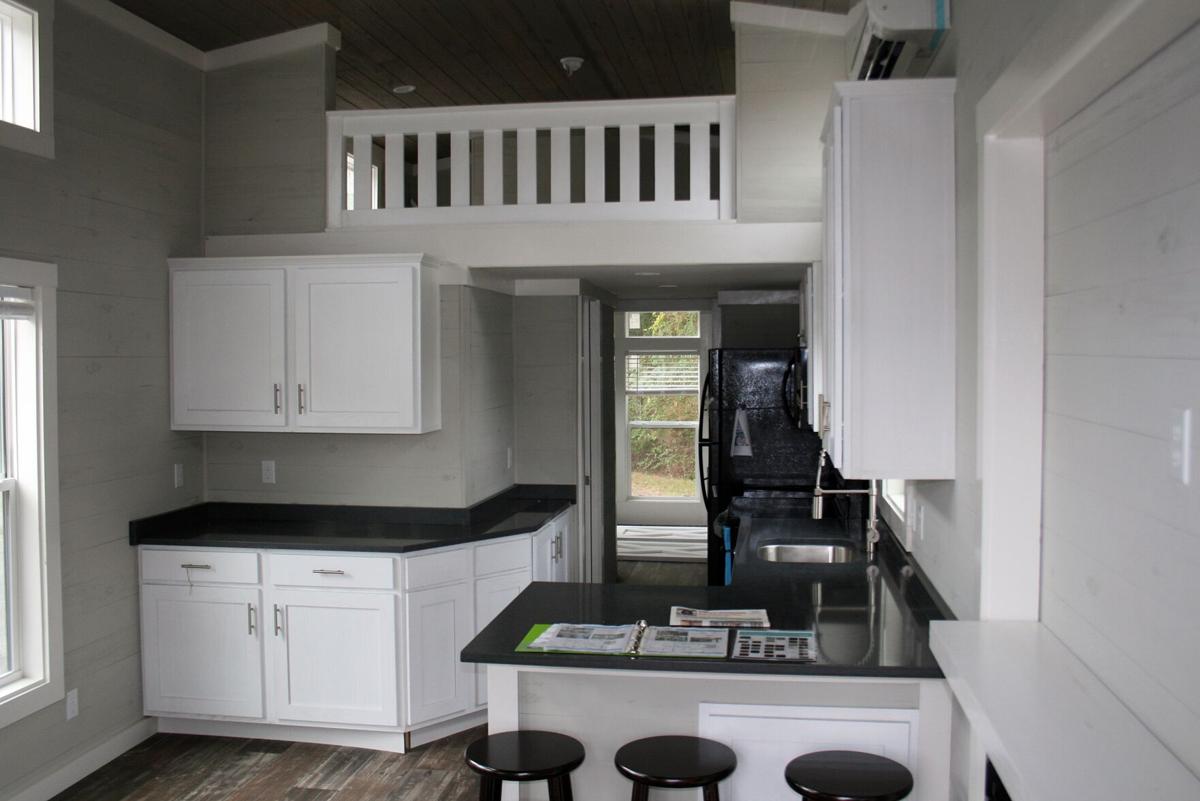 A loft space, which can be used for sleeping or just hanging out, overlooks the kitchen in this tiny home model. 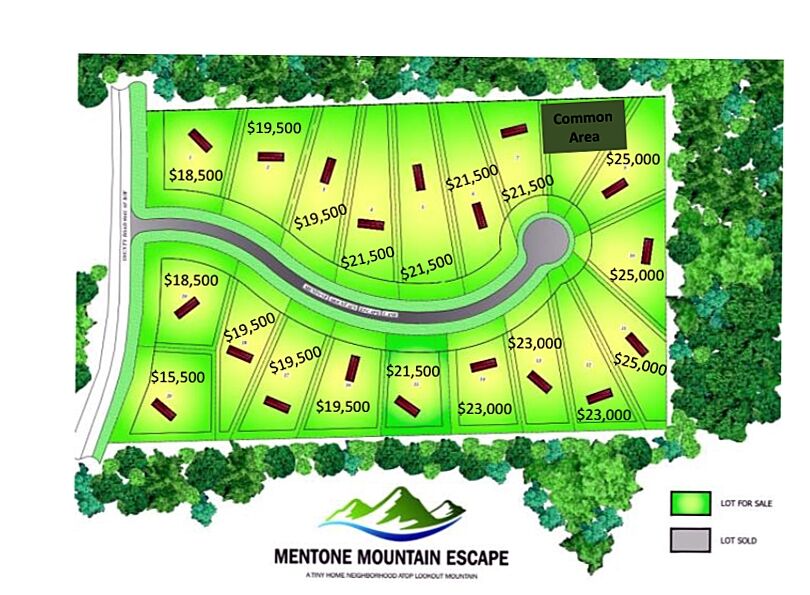 River Ridge Escape tiny home sales director Emmye Holbert gets a kick out of a question about some of the specs. She said most visitors find they really could live in 400 square feet of space.

The relatively spacious interior of most tiny home models surprises many of the visitors to the River Ridge Escape sales lot in Menlo, according to marketing executive Emmye Holbert.

Ed Watters, owner of Little River Escape on Lookout Mountain, is turning his full attention to expansion of his tiny home business.

A loft space, which can be used for sleeping or just hanging out, overlooks the kitchen in this tiny home model.

The Silver Hill Escape tiny home community is being developed in two phases. Phase One is 10 lots while the second phase is planned to have approximately 30 lots.

Cloudland Escape, on the Lookout Mountain Parkway, has 10 purchasable lots. The lots range from just under nine-tenths of an acre to just over 1.8 acres.

It has been five years since Watters opened the Little River Escape community on Lookout Mountain. The first year, most of the work was focused on infrastructure — putting in roads, power, water — and addressing amenities like a swimming pool. He thought the development would be ready by Memorial Day, then July 4, then Labor Day but finally got it open on Sept. 24, 2015.

“Right after the summer season was over,” Watters said.

In January of 2019, Little River Escape was written up in U.S. News and World Report as being one of the top six tiny home communities in the country. Over the course of the next 22 months, Watters leased out 32 lots.

“We’ve had people come from 12 states and move to Cloudland, Georgia,” he said. “It’s about 50-50; 50% of them are full time residents and live there year round and then we have people that use them as vacation homes.”

After Little River Escape, River Side Escape was developed on a 15-acre tract on Lake Lahusage.

River Side was developed differently than Little River in that Watters is selling the lots as opposed to leasing them.

“The advantage of the lease is that I don’t have to subdivide the property,” Watters said. “They have private roads, private water lines. I’m leasing you a site to park your house.”

The key word there is “park.” Each tiny house is considered to be a parked model recreational vehicle.

“Even though it’s an RV like a camper, it’s still a tiny house on wheels,” Watters said. “You’re leasing a spot to park your house for a five-year minimum. We include the water service, garbage service, the landscape maintenance service and use of all of the amenities in a gated community.”

Leasing eliminates the need for lawyers to do title searches and there are no closing costs.

On for-sale lots, someone gets a deed for the land and a title for the house.

Along with the national exposure in U.S. News, Watters credits a lot of his success to what he calls his “rock star” sales and marketing professional Emmye Holbert.

“She lives in a tiny house and is a walking testimonial,” Watters said.

“I would say most people are shocked by the amount of space that is in 398 square feet,” Holbert said. “People see them on TV but when people come in actually step into one they’re like, ‘I could actually live in this.’”

She said most people prefer a first level bedroom but they also want the loft space that is included in so many of the models.

Watters realized he was going to run out of land pretty quickly, so he decided to buy land in DeKalb County, Alabama, for the Mentone Mountain Escape community. He’s got 19 half acre to three quarter acre lots for sale there.

The infrastructure is complete except for the final coat of asphalt.

“We just finished it 10 days ago and we’ve got three closings scheduled and two more pretty soon after those,” Watters said.

The Silver Hill Escape is being developed similarly to the original Little River Escape, with 10 lots right on the highway that will be for sale. The back 40 acres will be accessed by a private road, with 30 lots that will be leased out. That development will include a pool, a fitness center and dog park.

“It’ll be a gated private community and we’ve already got five of them under contract,” Watters said. “One (buyer) from Florida, another from Michigan.”

He expects at least three of the new Silver Hill Escape residents to move in before the end of the month.

Watters expects Silver Hill to take off because of its proximity to town, whether that’s Rome, or even Atlanta.

“There are beautiful rock outcrops,” he said. “It’s close to the brow (of Lookout Mountain) but not right on the brow.”

By purchasing a lot and a tiny home, someone looking for a mountain getaway can be in a house with a landscaped yard for less than $125,000.

The landscaped lots, complete with outdoor seating areas and firepits, is really what sets Watters’ developments apart from a lot of other tiny home communities.

“All of ours are about a half acre to an acre in size,” Watters said. Each of the homes at Little River Escape is nestled back in a gently wooded area and not lined up all in a row.

The tiny home dealership is set up in Menlo with eight models on site. People can look at a larger variety on the website and Watters is able to ship the tiny homes anywhere in the country.

As a result of the success and growth of his tiny home business, Watters has arranged for a management level buy-out of his Watters Landscape Co.

He described the deal as similar to an Employee Stock Option Purchase plan (ESOP) and said that the only difference clients may notice is that he won’t be at the business.

He’s been working on the details for the past several months. The transition was revealed to employees during a special meeting Thursday.

Watters is also a principal partner in the Village at Maplewood senior residential community off Martin Luther King Jr. Drive in Rome.

The Latest: Mask mandate spurs Idaho official to push back

World markets subdued as US trading shut for Thanksgiving