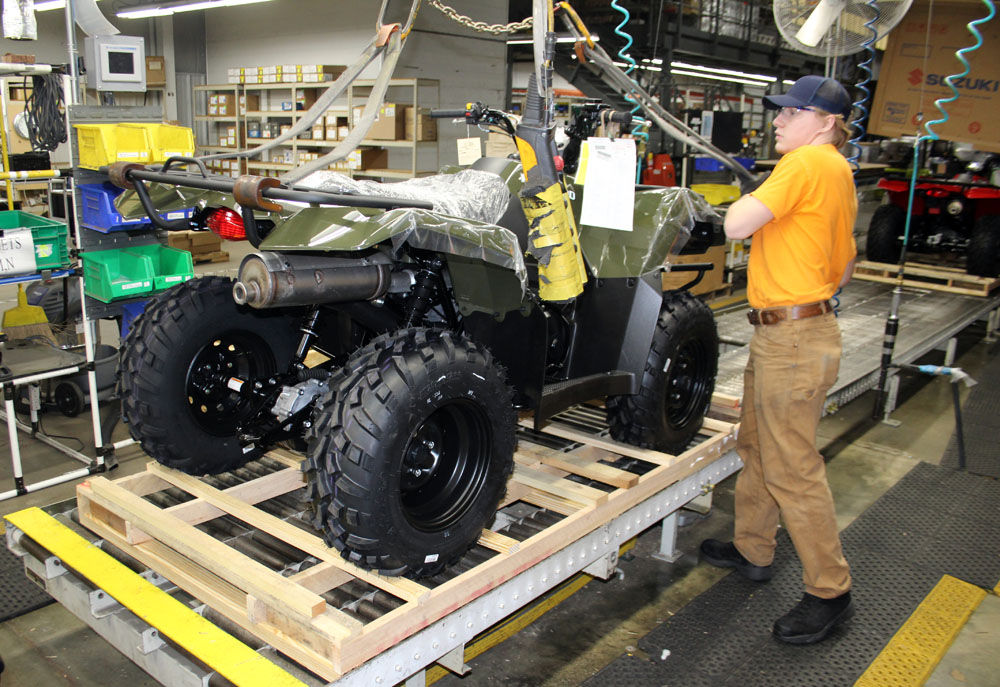 A worker at the Suzuki plant on Technology Parkway prepares to load an ATV into a shipping crate at the Rome plant in this 2016 file photo. 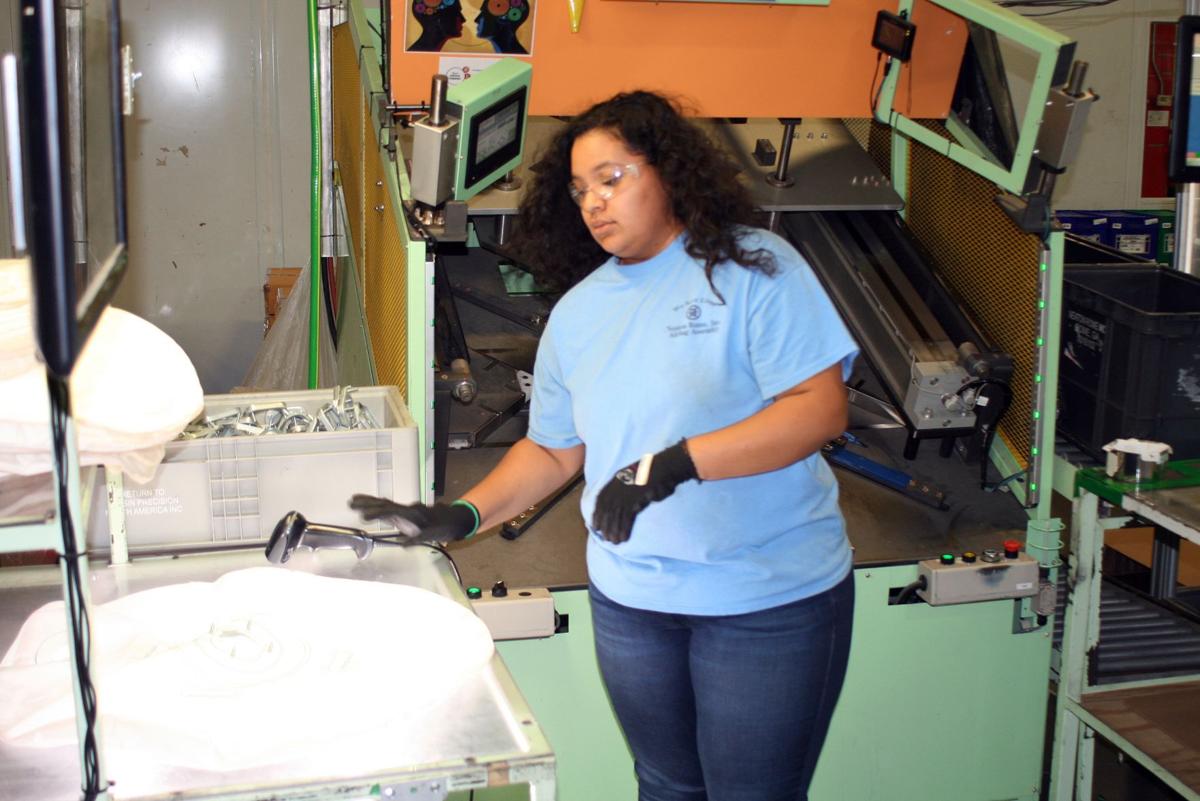 Bailey Carlisle works on the airbag assembly line at Neaton Rome in March 2019. The automotive parts supplier has expanded in Rome several times over the last two decades. 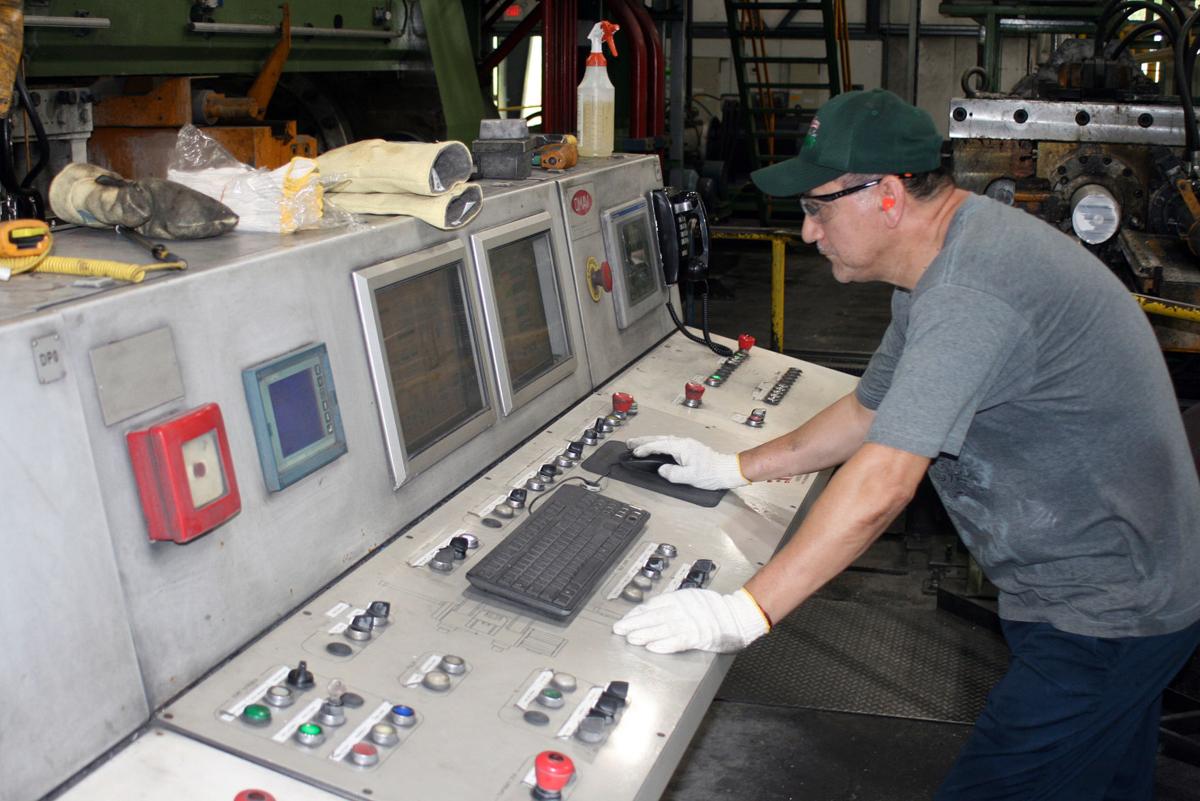 Pilar Reyes runs a control panel at one of the extrusion stations in the Profile Custom Extrusion plant in Rome in this 2018 file photo.

A worker at the Suzuki plant on Technology Parkway prepares to load an ATV into a shipping crate at the Rome plant in this 2016 file photo.

Bailey Carlisle works on the airbag assembly line at Neaton Rome in March 2019. The automotive parts supplier has expanded in Rome several times over the last two decades.

Pilar Reyes runs a control panel at one of the extrusion stations in the Profile Custom Extrusion plant in Rome in this 2018 file photo.

Asked if they knew nearly one in five Floyd County jobs is in the manufacturing sector, a good many Romans would probably shake their head and say, No way!

Health care and education-related jobs have long been regarded as the mainstays of the local economy, but a recent survey shines a bright new light on manufacturing.

According to a SmartAsset survey, 17.98% of local jobs are in manufacturing and Rome ranks No. 8 on the list of top metropolitan areas for manufacturing workers to work and live.

SmartAsset in an online financial technology company that offers a variety of personal finance advice through the use of tools such as the manufacturing workplace survey. The company is focused on issues such as home-buying, retirement and taxes.

Rome-Floyd County Development Authority President Missy Kendrick said the information underscores the value of the manufacturing base in Rome and Floyd County. Kendrick said it’s not unusual for manufacturers to grow quietly, outside of the public eye.

The competitive nature of manufacturing is one reason that companies don’t always seek publicity when they increase production. They don’t always want their competitors to know what’s going on.

The Rome-Floyd County Development Authority is the lead agency when it comes to recruiting new industry.

Much of the loss can be pointed at cheap foreign labor; some of the losses have been blamed on U.S. tax policies.

Pam Powers-Smith is director of business and industry services at the Rome Floyd Chamber and liaison to the Greater Rome Existing Industries Association. She said she hopes people realize how important manufacturing is to the community.

“We’re excited to be No. 8 because I think that helps us going forward, whether it’s with recruiting or expansions,” Powers-Smith said. “It’s also just a sense of pride for our existing industries. I think it helps them realize they’ve chosen a great place and have a great workforce.”

The existing industry base in Rome has been expanding significantly in recent years. After the Kerry Group took over the seasonings and coating division of Southeastern Mills, now Summit Hill Foods, Kerry quickly announced a major expansion of the facility on Douglas Street in the Lindale community with plans to add over 100 jobs.

Ball Container and Ball Packaging up in Shannon have added a new line to the existing building and built out a large addition to the plant for a new product line, aluminum recyclable cups. Ball expects its projects to add close to 150 jobs.

Marglen is building an addition to its recycling plant on Ward Mountain Road and expects to bring on another 20 employees.

VT Industries just this past week announced plans for a major 39,000-square-foot addition to its facility on Redmond Circle in West Rome. They’ll be hiring as many as 40 new employees over the next 18 months.

F&P Georgia revealed plans to add three lines to accommodate service for a new carmaker. And before the company could complete plans for that project, it learned it would need to grow again to meet new contracts for as far out as 2022.

There are jobs and, perhaps more importantly, careers to be had in manufacturing. A lot of baby boomers came home from the Korean or Vietnam wars to find work in manufacturing facilities in the late ’50s through the early ’70s. As those people retire, companies have experienced some challenges replacing their skillsets.

To account for the COVID-19 pandemic, the survey also made consideration for the October unemployment rate which, in spite of the pandemic, had dropped back to 3.7%.

The survey revealed some critical facts this fall.

Nationwide, just over one in 10 jobs, 11.39%, are in the manufacturing sector in the 378 metropolitan areas across the nation.

Elkhart-Goshen, Indiana, has the highest rate, 57.45% of all jobs being in the manufacturing sector. At the opposite end of the spectrum is Laredo, Texas, where less than 1% of the workforce, just 0.84% to be precise, works in a manufacturing job.

Between 2017 and 2018, income for manufacturing workers actually went down 0.09% in the Rome area, placing the community in the bottom quarter of the nation’s metropolitan communities.

“That actually does surprise me, but it’s still pretty stable,” Kendrick said.

When Kendrick and her staff are out recruiting new jobs to the community, the minimum wage to be eligible for any kind of incentive is $13.53 on average. Most companies are paying well above that.

“They have to do that to be competitive anyway,” Kendrick said.

The best news for Rome and Floyd County is that unemployment in October was just 3.7%, putting Rome in the best 10% of metro areas for that metric.

Kendrick said she plans to make sure statewide economic development partners, Georgia Power and others, are well aware of the new SmartAsset study. She wants to make sure the positive report is one of the first things they share with companies that are looking for a new location in Georgia.

The SmartAsset report lists St. Joseph Kansas/Missouri as the top metro area in the country for manufacturing workers. Hinesville, Georgia, was ranked No. 3; Dalton checked in at No. 32; and Columbus was ranked No. 47.

Ondas Holdings Inc. Announces Appointment of Jas Sood to Board of Directors