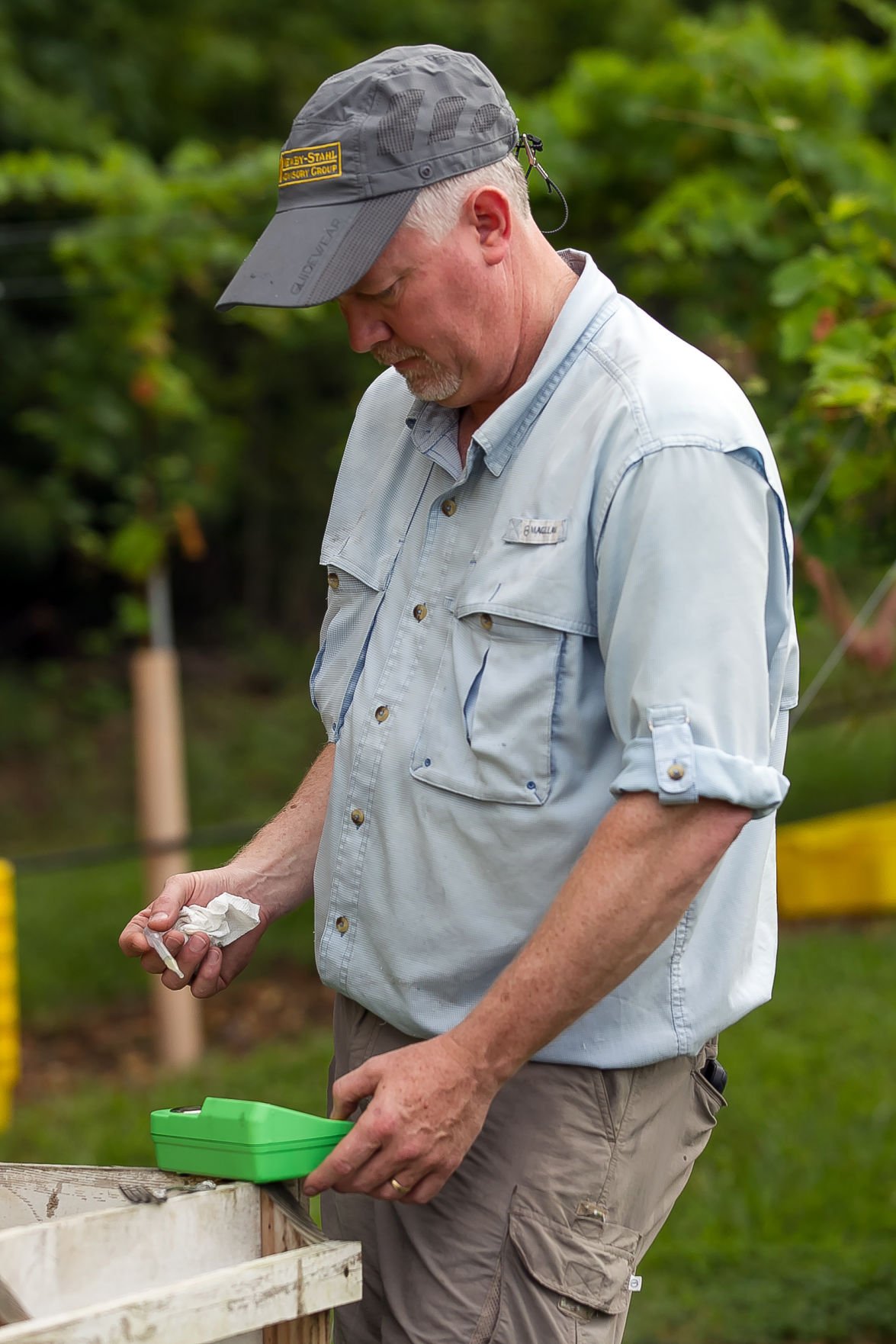 Billy Newby tests the sugar content in grapes at his vineyard in West Rome. 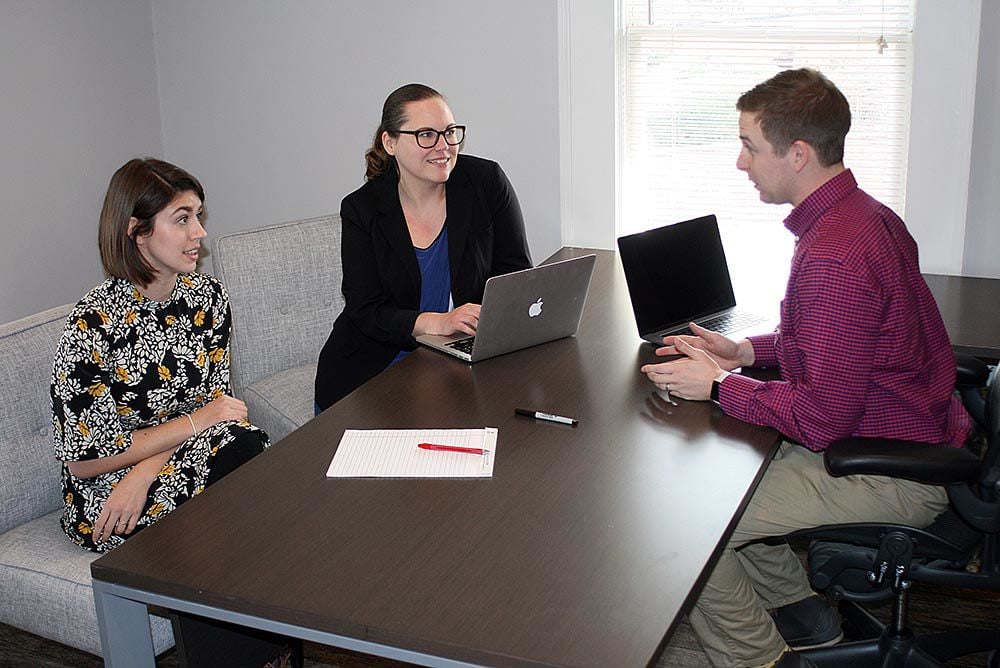 Abbie Smith (from left), Sarah Tebo and Braden Keith talk about the roll out of the new Romega Digital — Know, Grow, and Show — business model in this December 2018 file photo.

Billy Newby tests the sugar content in grapes at his vineyard in West Rome.

Abbie Smith (from left), Sarah Tebo and Braden Keith talk about the roll out of the new Romega Digital — Know, Grow, and Show — business model in this December 2018 file photo.

Former Rome Floyd Chamber executive director Al Hodge was noted for preaching job growth based on an analogy to a three-legged stool. Jobs are created by the expansion of existing business and industry, they are created by bringing new industry to town and they are formed by encouraging start-ups, or entrepreneurial enterprise.

But just what is an entrepreneur?

The Merriam-Webster dictionary defines an entrepreneur as “one who organizes, manages, and assumes the risks of a business or enterprise.” The Oxford dictionary definition of entrepreneurship calls it “the activity of making money by starting or running businesses, especially when this involves taking financial risks.”

The key word or phrase in both definitions would seem to be taking a risk.

Braden Keith, at Romega Digital, said that from a relatively young age he felt compelled to lead an organization and invest in people.

“I felt like that most likely would pan out to be owning and leading a business,” Keith said.

“We rebranded and it’s our own business now,” Keith said. “We reach way outside Rome and, actually, most of our revenue is outside of this zip code and this state.

The Rome Floyd Chamber bought into the concept of promoting entrepreneurship years ago with the creation of its Spectrum of Technology conference, which evolved into the Confluence Conference.

The conference typically included presentations related to trends in new technologies along with local companies that are providing a variety of high tech digital services.

The conference started out as a two-day event, held at sites including the Forum River Center, then transitioned into a single-day event at the DeSoto Theatre or Courtyard Rome Riverwalk.

One of the most successful programs occurred in 2008 when Dr. Julie Gerberding, director of the U.S. Centers for Disease Control and Prevention, was the keynote speaker.

Through the years, the conference has drawn presenters such as Robert T. McNally, CEO of Geovax Labs, who spoke about innovation and the development of vaccinations for viruses like Zika, HIV and Ebola.

Chris Anderson, former editor-in-chief for Wired magazine, was a keynote speaker one year. Dave Berkus, an assistant professor of management at Oral Roberts University, and Jeremy Simon, president of 3DUniverse, were primary speakers in 2014 and 2015 respectively.

Closer to home, Stephen Fleming, head of the Enterprise Innovation Institute at Georgia Tech, and David Lee, vice president for research at UGA, have been participants in the program through the years.

The Chamber’s position of membership director was ultimately altered and is now known as director of membership and entrepreneurial development, a post held by Thomas Kislat. He said the COVID-19 pandemic resulted in the cancellation of the 2020 Confluence conference, but he is hoping the conference can be an in-person event this year.

Kislat sees his role as a facilitator for anyone seeking to start a company.

“A lot of people have a great idea, but they don’t really have the business background,” Kislat said. “We are here to connect them with the right people. We want them to be successful.”

There is a plethora of factors that go into the decision to start a new company.

Any good real estate agent will tell you one of the first factors is location, location, location. Is the community business friendly? Is access to the location good, if your business will include in-person traffic? Is parking good? If you’re not a completely new concept to a community, is there competition nearby?

The second big factor involves financing. If you’ve got available cash, is there is enough to support a slow roll at the outset of opening up? If you don’t have cash up front, do you have access to capital? Do you have a business plan that includes financing for marketing? Even the best thought out business requires that people know who you are, where you are and exactly what you can do for the customer.

Kislat said that connecting entrepreneurs to sources for capital is a big part of what he does.

A common mistake made by young entrepreneurs today is dependence on social media to get the word out. You might have a ribbon-cutting with 500 friends on Facebook or 750 followers on Instagram, but how many of the friends and followers can be translated into customers.

Keith said the biggest challenge to his early years with Romega Digital has been its explosive growth.

“We’ve doubled (revenue) every year we’ve been in business. Each time you do that, it puts a stress on processes and skillset and team members,” Keith said.

He said the challenge in provide value to customers has been a lot of fun.

Kislat said that a big challenge facing many young millennials is the difficulty of balancing their business with their home life.

“Sometimes you have to run a business from 9 to 5, six days a week,” Kislat said.

Attracting a workforce is another issue that confronts start-ups who are trying to run a business on a shoestring budget.

One of what Kislat considers a success story in recent months involves Rome businessman Billy Newby’s effort to open a commercial winery in West Rome.

“It was a hobby that got out of control,” Newby said.

He was already a partner in a successful local financial advisory firm. He owned a large farm off Billy Pyle Road in West Rome and had some success with growing blackberries, raspberries and blueberries.

But Newby said continuously picking the fruit daily over a six-week period got to be a hassle. So when someone suggested grapes, it didn’t take him and his wife, Shannon, long to make the switch

Kislat said that one of the best ways for Newby to get the business going was to open a tasting room downtown.

“He needed help and we got everybody at the table ... and we made it happen,” Kislat said.

Newby said that really got the ball rolling with respect to local permitting for the project.

“I don’t think this would have been as big a deal if we hadn’t had the pandemic,” Newby said.

He said that, in the future, if another winery and tasting room type of facility wants to open in Rome, it will be a lot easier.

“Nobody had ever done it. We didn’t have ordinances, so they created a lot of stuff to get it done,” Newby said.

Once his wine tasting room is open, he said, he’ll start on the actual winery at his farm.

The Chamber also offers entrepreneurs a special workplace, the OTR Lounge, which has four computer work stations available in a room at the chamber building.

People needing space, or thinking about starting their own business, can reach Kislat at 706-291-7663 or contact the University of Georgia Small Business Development Center in Rome at 706-622-2006.