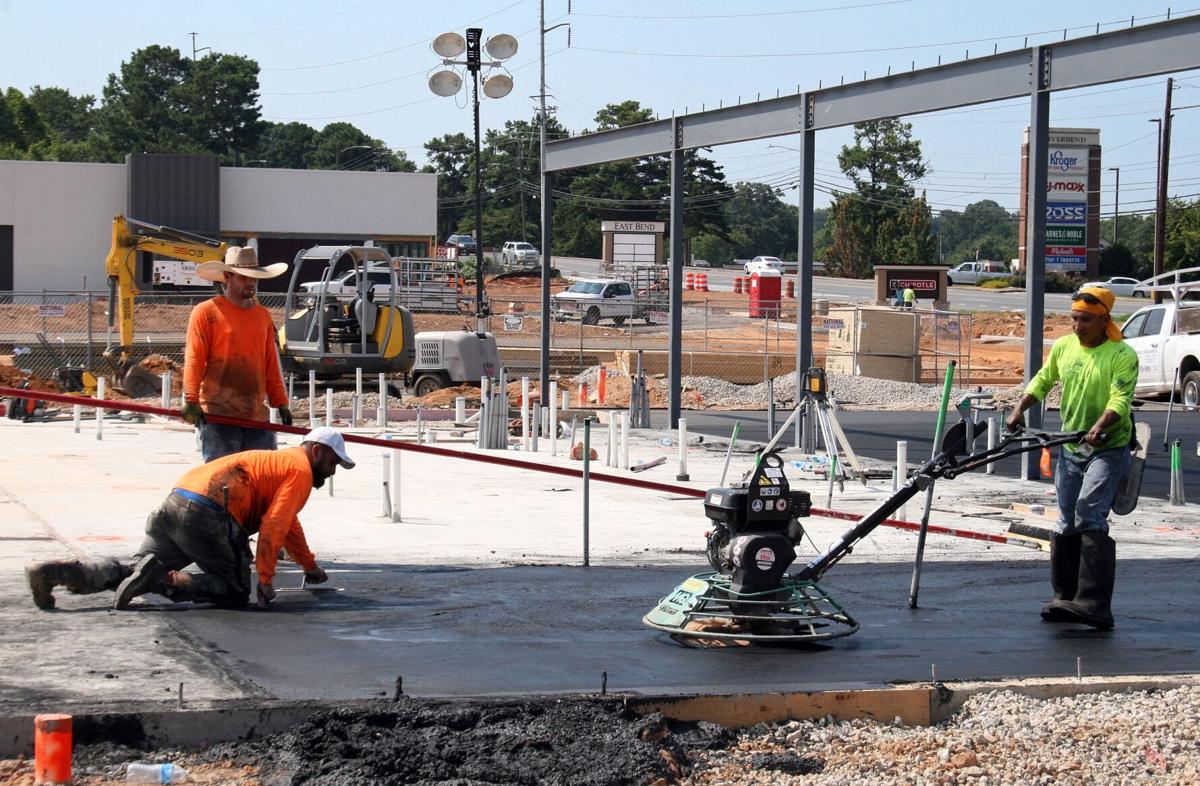 A crew works on the concrete flooring at the new Texas Roadhouse under construction at the corner of Hicks Drive and Turner McCall Boulevard. The new Chipotle restaurant is nearing completion in the background. 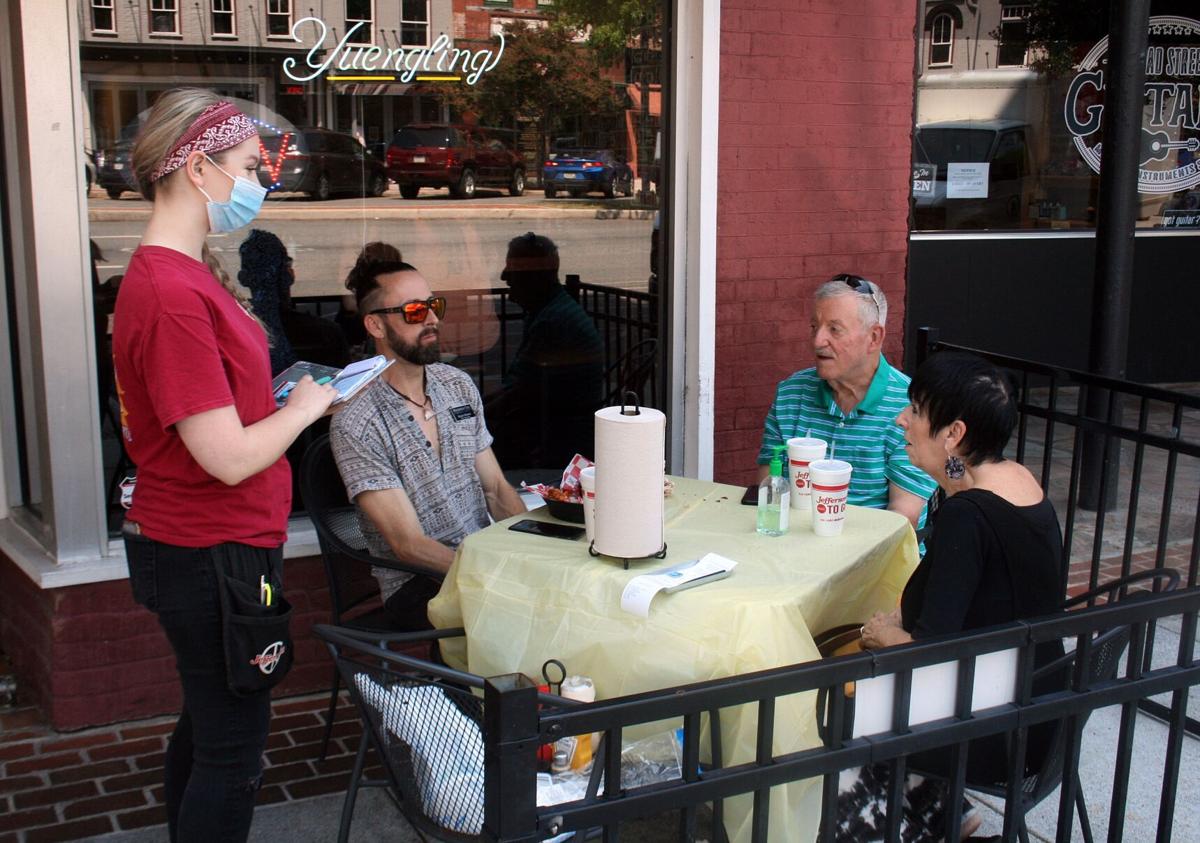 Nikki Allred (from left) takes an order from Bryan Blalock, Charles Blalock and Connie Blalock in the sidewalk cafe in front of Jefferson’s in downtown Rome. 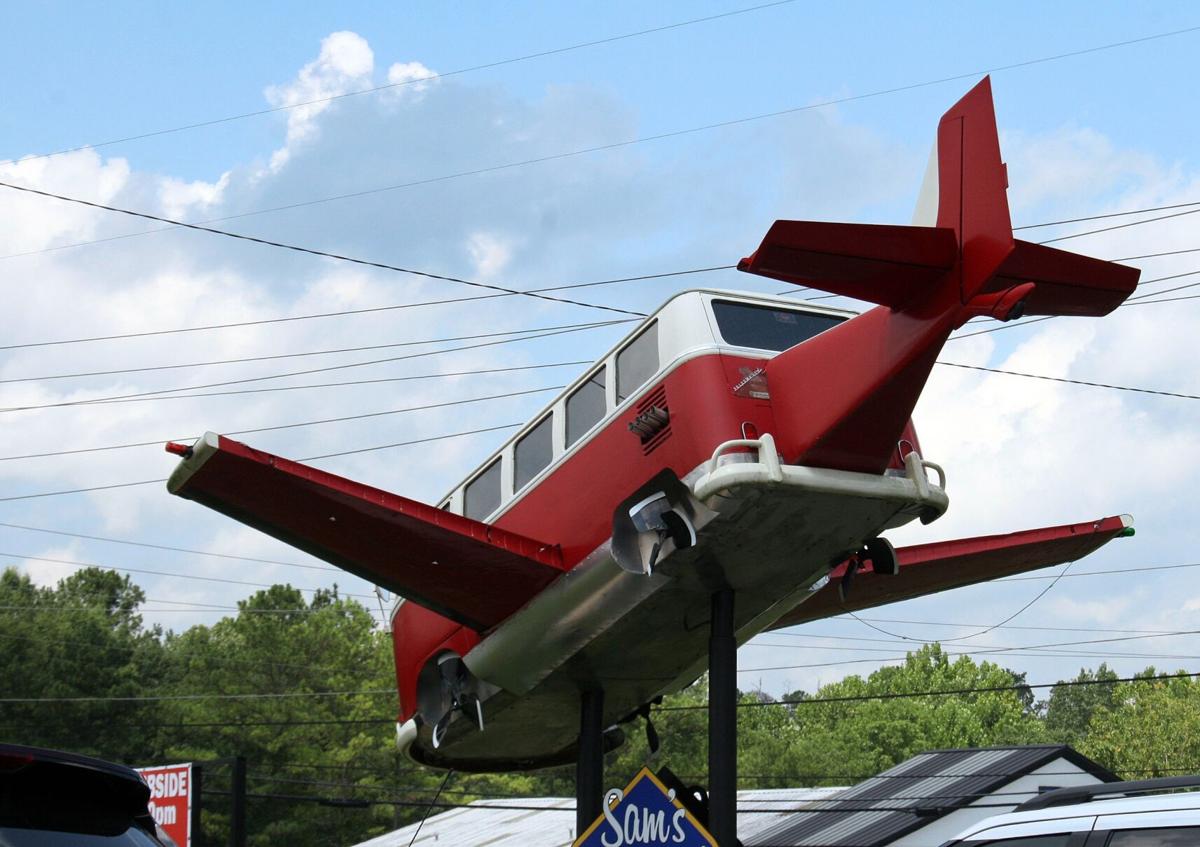 Few, if any of Rome’s 153 restaurants or 60 beverage pouring locations have as unique a logo/marquee as Sam’s Burger Deli on Martha Berry Highway. The restaurant actually has the fuselage of a Gulfstream jet protruding through the roof.

A crew works on the concrete flooring at the new Texas Roadhouse under construction at the corner of Hicks Drive and Turner McCall Boulevard. The new Chipotle restaurant is nearing completion in the background.

Nikki Allred (from left) takes an order from Bryan Blalock, Charles Blalock and Connie Blalock in the sidewalk cafe in front of Jefferson’s in downtown Rome.

Few, if any of Rome’s 153 restaurants or 60 beverage pouring locations have as unique a logo/marquee as Sam’s Burger Deli on Martha Berry Highway. The restaurant actually has the fuselage of a Gulfstream jet protruding through the roof.

It’s hard, even in an age of information overload, to trace down the origin of the phrase “eat, drink and be merry.”

Gauging by the growth of its hospitality industry, Rome ought to be a pretty pleasant place to live, work and play.

“We’ve had so many franchise restaurants come in and do well,” said City Commissioner Craig McDaniel, who also is a commercial real estate agent in Rome. “The locally owned restaurants — places like Schroeder’s and Harvest Moon and several others — have sustained through the years because of participatory ownership. If you want to do a case study, just look at Broad Street.”

Consider downtown Rome and the Broad Street corridor. As one rides down Broad Street from Turner McCall Boulevard, there is Doug’s Deli Downtown and Swift & Finch Coffee in the 600 block. Yummy Thai and Jamwich come next, in the 500 block. The 400 block features El Zarape, LaScala, Sweet Pickles, Schroeder’s and Kaleido-Sno.

Things start to heat up in the 300 block with the Brewhouse, Rome City Brewing, Jefferson’s and Ana’s by the River.

And the Cotton Block will get a small tea room at Southern Seasons & Co. around the end of August.

In spite of the perceived parking issue downtown, and even in conditions like the COVID-19 pandemic over the last five months, McDaniel said that, if a business has good food, people will find a way through the front door.

Ana’s by the River, 315 Broad St., could be considered a prime example. Ana Williamon has bounced around several locations in Rome over the past 30 years and loyal fans have followed her from one place to another.

Dereck and Joan Brady at Crawdaddy’s Seafood/Grill, 239 Broad St., are among those who have found a way to survive the pandemic environment.

“You’ve got to be the best you can be,” Dereck Brady said.

He pointed to consistency in food and service, along with the ability to offer something different, as keys to making a successful restaurant.

Getting consumer confidence back and getting the rest of his seats available are critical, given the growth that is taking place, he said.

Real estate developer Wayne Robinson said he’s had discussions with at least two groups interested in putting another restaurant in his building at 241 Broad St. The COVID-19 situation has put those discussions on hold for the time being, so Robinson said he’s focused on renovating the second floor, where he plans to put in three or four apartments.

Robinson said the trend toward downtown living is one of the reasons the large number of restaurants there can thrive, and he does not see the interest diminishing any time soon.

Eric Tant, the owner of John Henry’s Grill, 233 Broad St., had his restaurant opening delayed about six weeks by COVID-19. But he said the reception by the community has been great since he opened during the third week of May.

“It’s been a roller coaster, but Rome definitely loves its restaurants,” Tant said.

He said the virus restrictions are frustrating, especially on Friday and Saturday nights when he has diners wanting to come but there’s already an hour and a half wait.

“You look around and see room for more tables, and empty tables that you can’t seat,” Brady said.

Brothers Wright Ledbetter and Robert H. Ledbetter Jr. have indicated their intention at East Bend is to bring in shops that don’t already have a presence in Rome. That is certainly the case for the restaurants landing at the corner of Hicks Drive and Turner McCall Boulevard.

Nonetheless, when you add those eateries to the inventory downtown, it seems like Rome might reach a saturation point.

“You get to a point where you’re slicing the pie so thin that everyone can’t survive,” Brady said. “Where that breaking point is, I don’t know. We could be very close.”

On the other side of the coin, Brady said the plethora of restaurants and choices bring a lot of people from other communities to eat in Rome.

“If the place next door or across the street is full, I’ve got a shot at getting that client,” Brady said.

The main corridor through Rome — Turner McCall Boulevard, which becomes Shorter Avenue — is loaded with opportunities, from fast food drive-thrus to sit-down, dine-in meals. The same can be said for the main north-south thoroughfare, the Second Avenue-Martha Berry Boulevard corridor.

Perhaps the most striking of Rome’s eating establishments is Sam’s Burger Deli. The restaurant at 3268 Martha Berry Highway near the airport features two Gulfstream jet bodies and a winged VW bus sign out front.

But, as successful as many Rome restaurants have been, it’s an ever-changing market and even some of the old favorites have folded for one reason or another. Paul’s Oyster Bar out on Alabama Highway is one example. The Opi’s building on Ga. 53 at the Ga. 140 intersection is another.

And some don’t get off the ground.

A spot in the Cotton Block at 110-112 Broad St. was purchased by a Carrollton businessman in the spring of 2015. Dino McDowell announced plans for a wood-oven pizza shop there but it never opened. The building has been on the market for most of the past five years.

Nonetheless, the continued growth of restaurants in Rome is almost enough to make one wonder who cooks at home anymore — although a nice new kitchen is still considered one of the most important features.

McDaniel said he recently renovated his home and spent a lot of money blowing out a wall to create a larger kitchen. He suspects he spent twice as much on the kitchen as he did on the rest of the house.

“And the extent of my cooking is what goes in the microwave,” McDaniel said.

By the way, the first reference to “eat, drink and be merry” can be found in the Bible, Ecclesiastes 8:15.