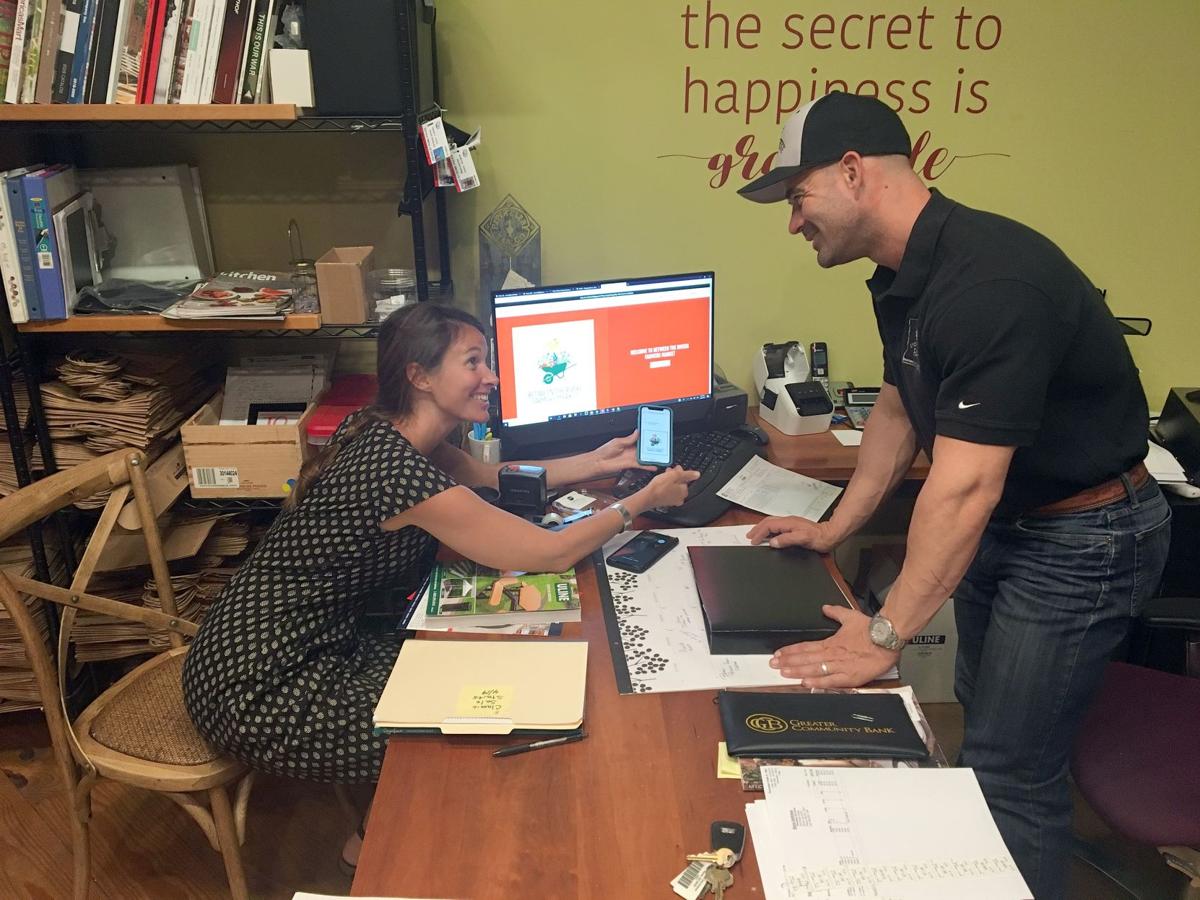 Elisabeth Lawson (left) shows Brian Moore of Lyons Bridge Beef a logo of the new Between the Rivers Farmers Market. 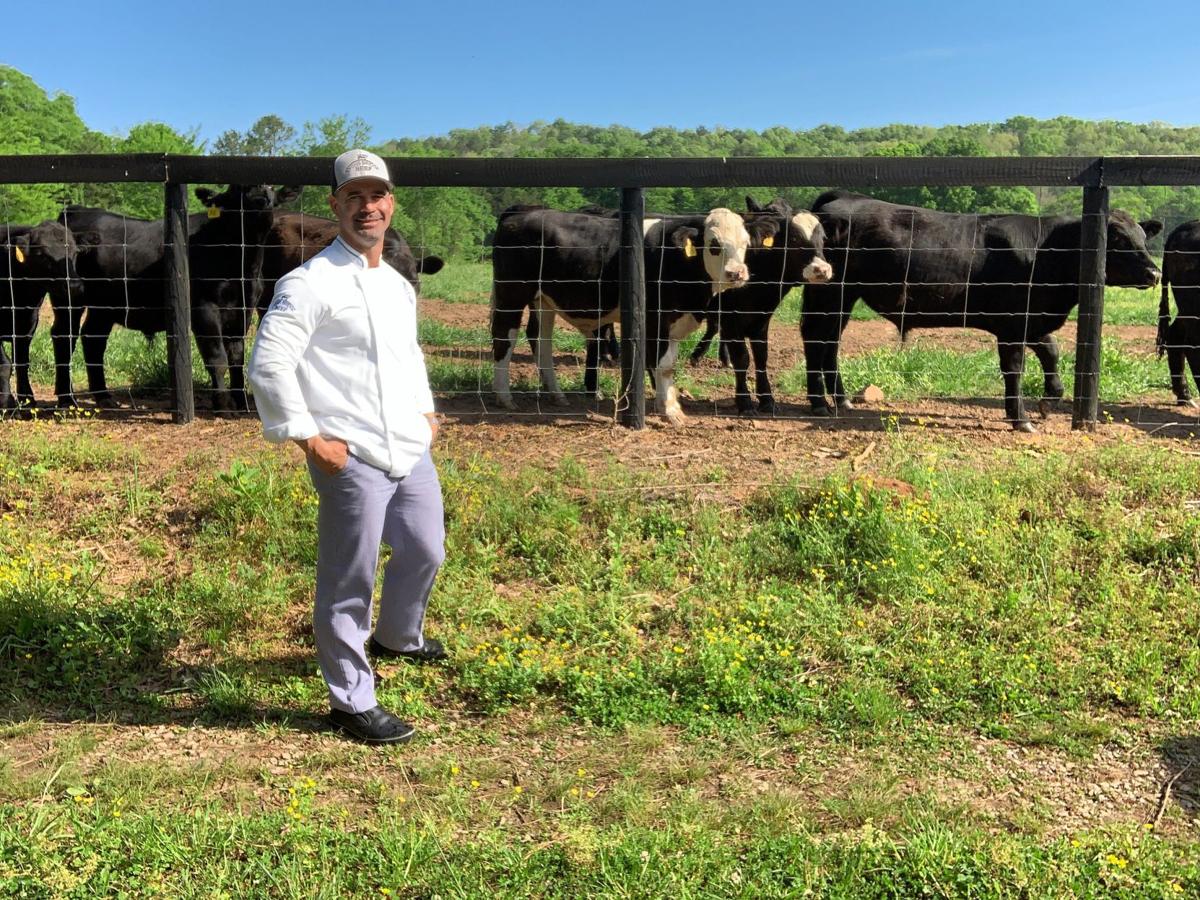 Chef Brian Moore of Lyons Bridge Beef with some of his pasture-fed Angus cows. Meat will be available Saturdays at the new Between the Rivers Farmers Market at Bridgepoint Plaza. 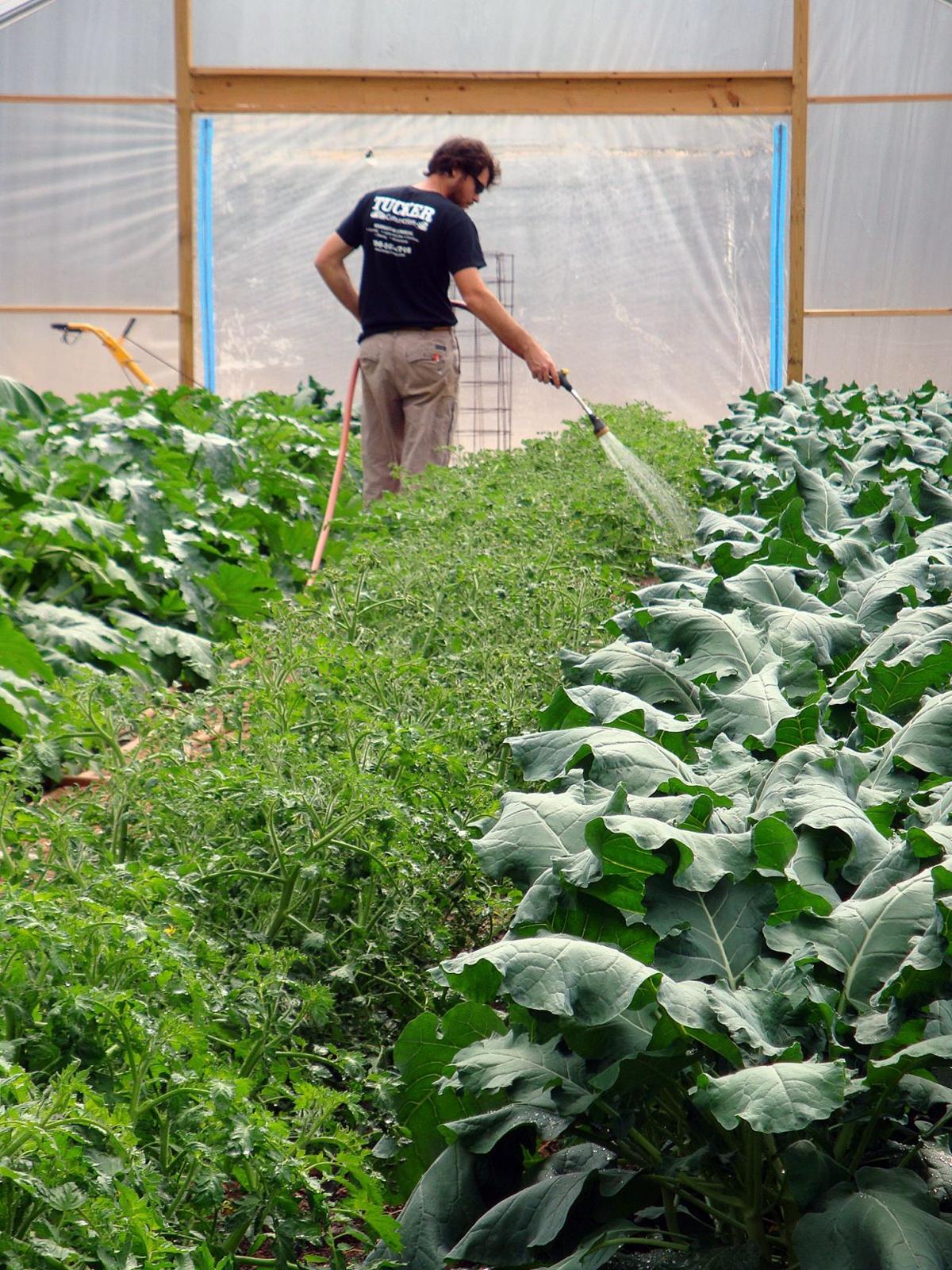 Craig Tucker waters plants inside one of his hoophouses. 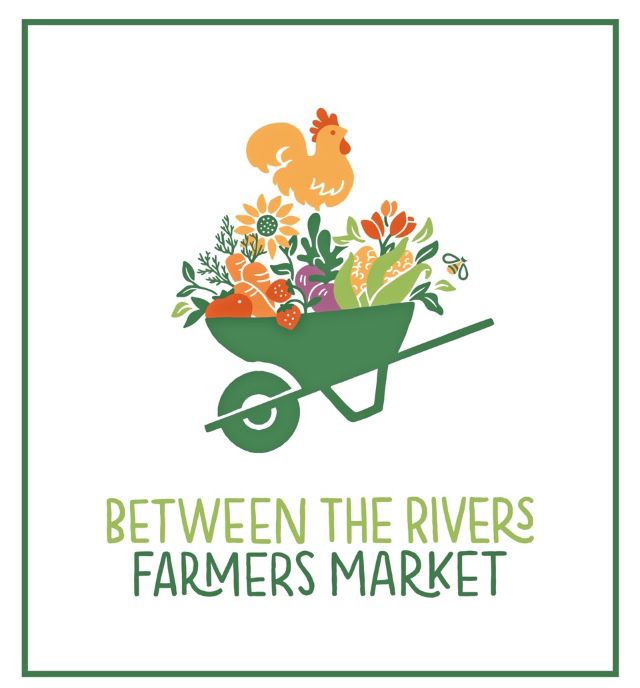 The logo for the new Between the Rivers Farmers Market which will open May 4 at Bridgepoint Plaza.

Elisabeth Lawson (left) shows Brian Moore of Lyons Bridge Beef a logo of the new Between the Rivers Farmers Market.

Chef Brian Moore of Lyons Bridge Beef with some of his pasture-fed Angus cows. Meat will be available Saturdays at the new Between the Rivers Farmers Market at Bridgepoint Plaza.

Craig Tucker waters plants inside one of his hoophouses.

The logo for the new Between the Rivers Farmers Market which will open May 4 at Bridgepoint Plaza.

A new farmer’s market will open in downtown Rome on May 4 at Bridgepoint Plaza. The new market, called the Between the Rivers Farmers Market, is being operated by a nonprofit organization led by Elisabeth Lawson of Rise ‘N Shine Farm in Calhoun.

Lawson, who serves as president of the nonprofit organization, said that operators of the Freighthouse Partnership have agreed to allow the market to set up in the back parking lot of the McRae, Smith, Peek, Harman & Monroe law offices building between 8 a.m. and 11:30 a.m. every Saturday. “Rain or shine,” Lawson said.

The market is being made possible by sponsorships from the vendors themselves along with other corporate sponsors whose fees help pay for promotional support, legal fees associated with the development of the 501(c)3 as well as the hiring of a market manager, Katy Watters, from Cedartown.

“The focus is going to be on the food,” Lawson said. She said the idea for the full-time market germinated a year ago as the result of very successful pop-up sales at Living & Giving on Broad Street.

“We saw that people really enjoyed the diversity of the produce, cheese and meats and having it all in one place,” Lawson said. “And having professional-quality vendors coming together all in one spot in downtown Rome, we thought would be a great idea.”

Megan Treglown, the marketing assistant in the Rome Downtown Development office, said she was extremely excited about the market opening on May 4. She believes the market will help provide some fresh food items for the growing number of downtown residents.

“It’s a start. The residents don’t currently have an option without leaving downtown and this at least gives them something now with the hope of growing something in the future,” Treglown said.

“It’s going to be a higher-end farmers market,” said Moore, whose Lyons Bridge Farm Beef business has grown from a farm-based sales business through the pop-ups to purchase of the Riverside Gourmet business on Broad Street in the past year.

Treglown said she would visit the pop-up markets frequently.

“I don’t remember which one it was, but it was packed and by the time I got there everything was almost sold out,” Treglown said. “It was great to see the community come together and interact with them and really enjoy it.”

Lawson said all of the farms that will participate in the market were hand-picked by the organizers and have been visited to make sure their farms live up to their claims of being certified organic or pasture-fed meat operations.

“There has to be something different about your farm,” Moore said. “Lawson added that they were looking for consistency and diversity among the participants, people who are willing to commit to being there each week so it’s not a hit-or-miss visit for visitors who come to the market.”

Lawson also made it very clear that none of the vendors are resale vendors. All of the farms will have their own merchandise and not something they went to the Atlanta Farmers Market and brought back to Rome.

“What you see is what we grew or produced,” Lawson said.

In addition to the Lyons Bridge Beef Farm, which will have beef, lamb and pork products with cheeses from the Udderly Cool Creamery and Rise ‘N Shine Farms, others that have committed to participate include Riverview Farms off the Coosawattee River in Gordon County.

Last September, Charlotte and Wes Swancy of Riverview Farms were honored by the Georgia Water Coalition for their efforts to protect the Coosawattee River from agricultural run-off.

Tucker Farms, an organic and hydroponic operation off Thomas Bluff Road overlooking the Oostanaula River in northern Floyd County, is among the prospective vendors.

Craig Tucker began farming in 2006 and purchased his current farm site overlooking the Oostanaula River in 2010. Tucker does not use synthetic pesticides, herbicides or fungicides and only plants non-GMO seeds.

Carlton Farms, a multi-generational family farming operation near Rockmart, is another vendor, along with Sapelo Farms which, as the name suggests, used to be located on the coast but moved to Silver Creek to raise meat, honey and flowers; Sequatchie Cove Creamery, which makes handcrafted cheeses up in Tennessee; Ellijay Mushrooms, which specializes in shiitake and oyster mushrooms; Sunflour Bakery of Rome, which will have specialty breads; Doug’s Deli of Rome, which will have pastries and muffins each weekend; and Swift & Finch coffee along with many others.

In addition to the fresh produce, dairy and meat products, Lawson said the market will feature different artisans every week, from potters to painters, who will have their handcrafted goods for sale. Children will also be able to come and play on the grassy area beside the parking lot.

Trump faces credibility test as he plays down virus threat

Trump, seeking to tamp down fears of coronavirus, names Pence to lead response

NFL, players move closer to new CBA, but deal not done yet