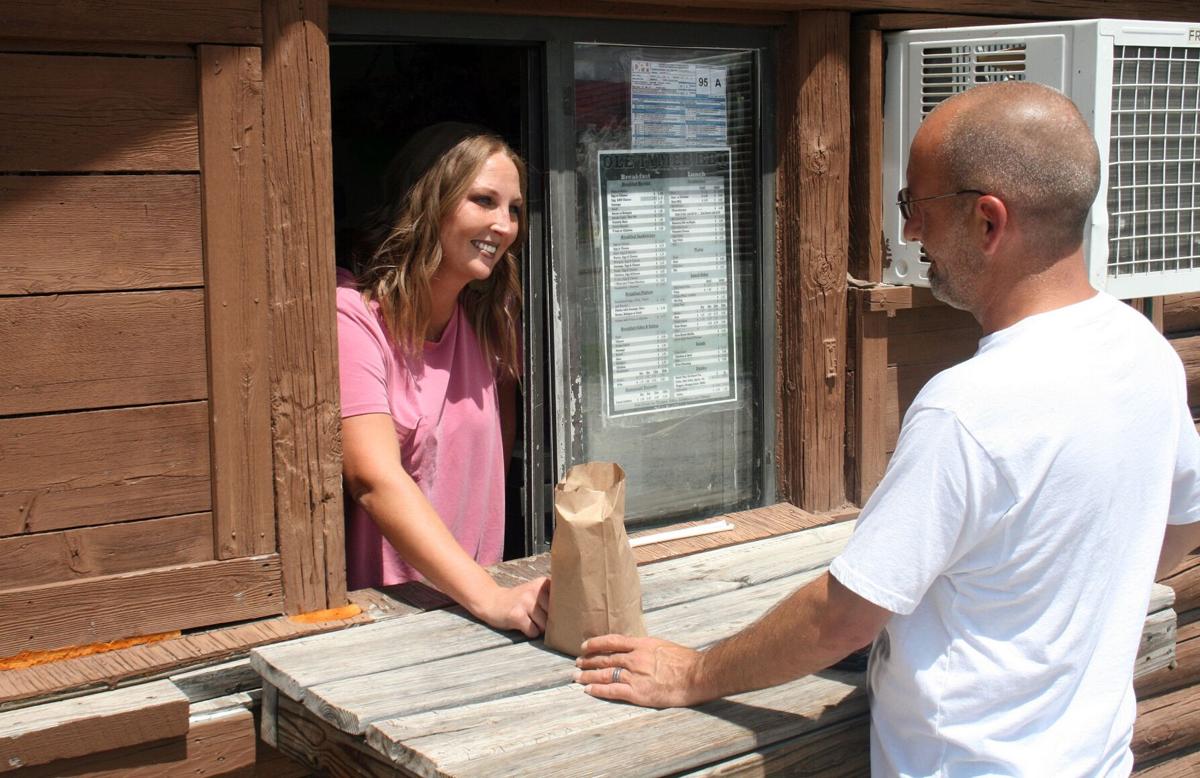 Courtney Otting (left) hands a lunch order to Earl Denny at the Ole Tymer walk-up window at 1000 N. Broad St. The restaurant has been in business for 36 years and its drive-thru and walk-up windows have been a blessing during the COVID-19 pandemic. 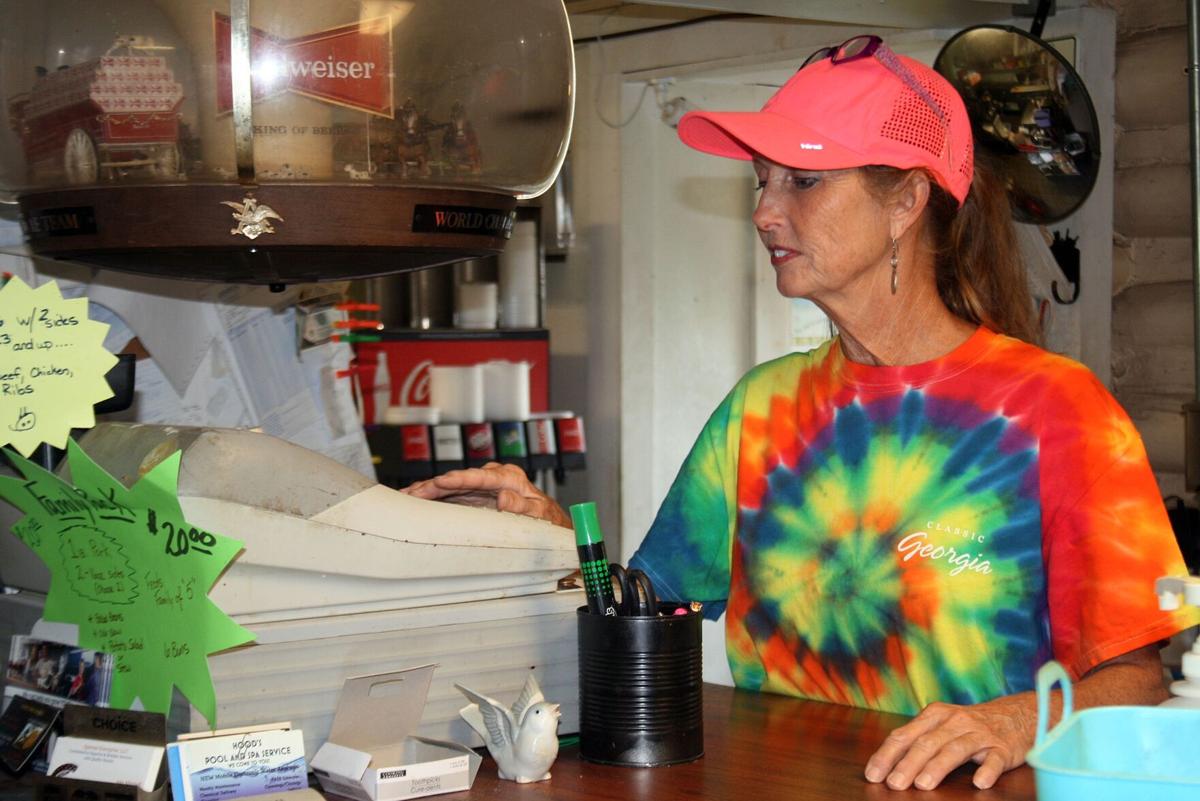 Ole Tymer owner Julie Owens rings up an order at the Armuchee restaurant Wednesday. Her second location, on Martha Berry Highway, opened in 2009. 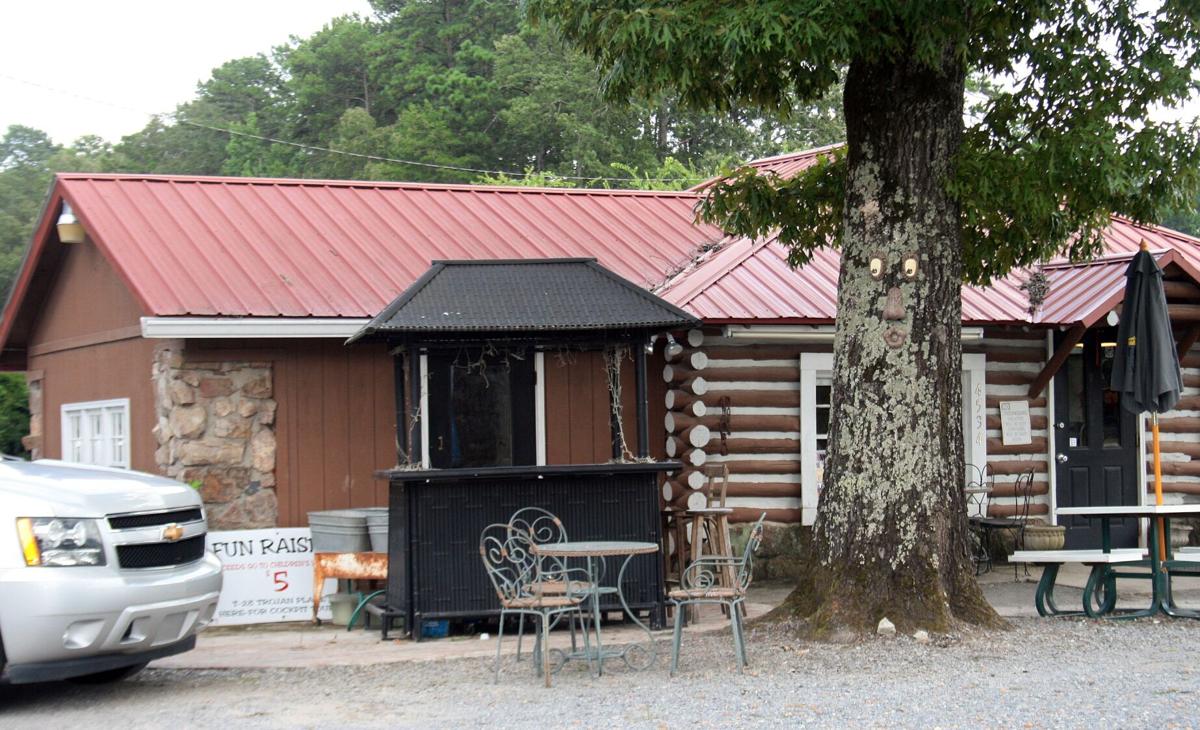 Unlike the original North Broad Street location, the Ole Tymer BBQ in Armuchee offers eat-in dining. Drive-thru service has been a mainstay for the business at both locations.

Courtney Otting (left) hands a lunch order to Earl Denny at the Ole Tymer walk-up window at 1000 N. Broad St. The restaurant has been in business for 36 years and its drive-thru and walk-up windows have been a blessing during the COVID-19 pandemic.

Ole Tymer owner Julie Owens rings up an order at the Armuchee restaurant Wednesday. Her second location, on Martha Berry Highway, opened in 2009.

Unlike the original North Broad Street location, the Ole Tymer BBQ in Armuchee offers eat-in dining. Drive-thru service has been a mainstay for the business at both locations.

Ole Tymer BBQ celebrated its 36th anniversary in Rome and Floyd County last week and is going strong in spite of the COVID-19 health emergency.

There’s the original location at 1000 N. Broad St., at Five Points in North Rome, and one in Armuchee at 4534 Martha Berry Highway.

Owner Julie Owens said the store at Five Points operates with two drive-thru windows and a walk-up window. Her daughter Courtney Otting, who runs it, and their staff have been able to work right through the pandemic with relatively little impact on the business.

“I never thought I’d be thankful we were strictly drive-thru, and as small as we are, but that’s how we’ve been able to stay in business,” Otting said.

Social distancing measures are in place at the Armuchee location, but the drive-thru there has been busy as well.

Owens said her staff has been following the guidelines like handwashing and wearing gloves all along, to meet public health requirements for food service workers.

“I kind of thought it was funny the public was going to have to reciprocate and do what we’ve been having to do,” Owens said. “Now it’s y’all’s turn. We’re fine.”

The Owens family has always been in the food business, and food service runs in their blood. Her daughter took over the Five Points site in 2009.

“My granddaddy had a meat market and little store,” Owens said. “We just had it in mind to do a small little restaurant and were just riding around Rome when we saw that piece of property (Five Points) and I thought it would be nice to do a little restaurant there. You could drive through it on both sides.”

She chose a barbecue theme and said that when they brought the smoker in, the driveway wasn’t even installed yet.

“We had not had the curb on the driveway prepared and we had people jumping the curb trying to get in when they started smelling the smoke,” Owens said. “We weren’t even open yet.”

The Five Points location started as a lunch and dinner business. About five years later they added the breakfast menu.

The breakfast business at Five Points has gotten “crazy busy” over the years, Otting said. It’s not unusual to see traffic backed out onto North Broad Street or East First Street. Otting said she has a very loyal clientele and generally knows what many of them are going to order before they get to the window.

“We are very thankful to have a lot of great customers who come through that are regulars,” she said. “A lot of them just hold up their fingers to let us know how many, because we know what kind of biscuit they want.”

The Armuchee site opened in 2009. Owens decided that she wanted a sit-down restaurant and felt there wasn’t enough room in downtown Rome at the time to add something closer to town. So she started looking out in the county.

The Armuchee site used to be known as Brother-In-Laws Restaurant and had been shut down for a couple of years when she was first shown it.

“I had to do a lot of checking before I would purchase the property because the ceiling was so bad and I didn’t know if the building inspection office or health department would allow me to do that,” Owens said.

She ultimately decided to purchase it and the restaurant has become a staple for a lot of families in the northern end of the county.

The drive-thru business sustained them throughout the changing pandemic emergency orders.

“We checked with what the restrictions were almost every day,” Owens said.

The Five Points location, taking advantage of the double drive-thrus, typically does a little more business than the Armuchee location.

“The Armuchee store is not as fast-paced,” Owens said. “People come in and take a break, get in out of the heat for an hour or so. Everybody downtown is in a big hurry to get back to doing whatever they have to do.”

Lunch activity is generally brisk at both locations. The pork barbecue and hamburger are big sellers. Owens said both shops make their own fresh hamburger patties daily.

A lot of farm families have made the Armuchee shop a regular place to eat several times a week. Otting said the evening business is not quite as strong as breakfast and lunch but has picked up some since the pandemic set in.

For both Owens and her daughter, it’s a long day. The downtown store starts breakfast prep as early as 4 a.m. while the Armuchee store gets started about an hour later at 5 a.m. Both restaurants close at 7 p.m.