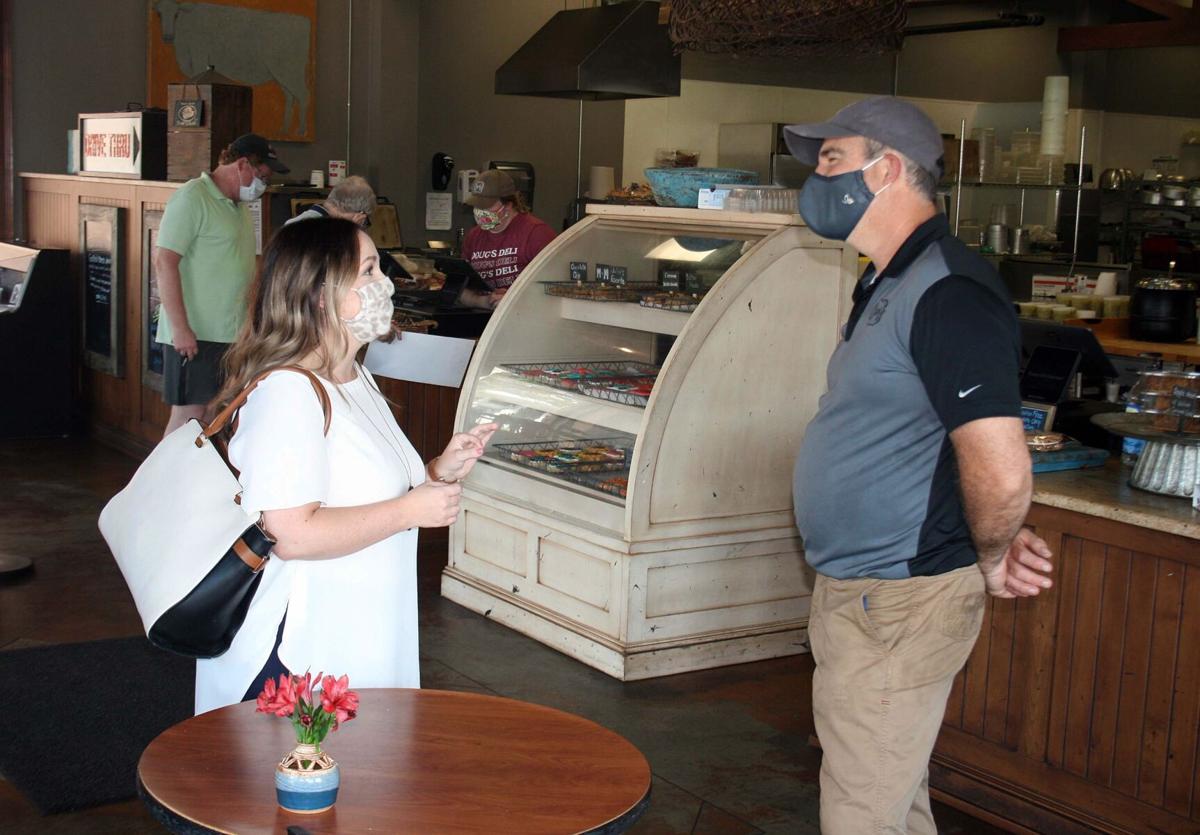 Rome’s Downtown Development Director Aundi Lesley (left) introduces herself to Doug Bowling, owner of Doug’s Deli Downtown, on Broad Street. Getting to know the downtown merchants has been a top priority for Lesley, who took over the post last month. 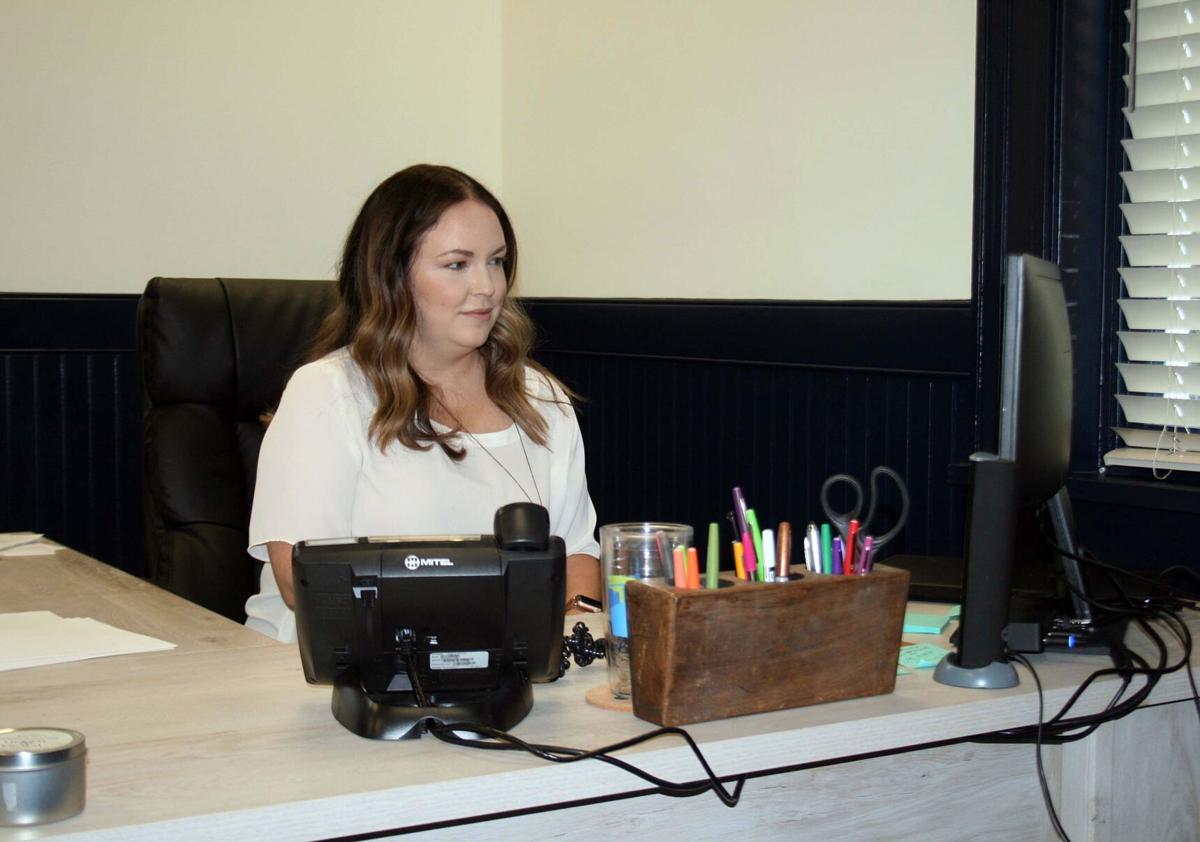 New Rome Downtown Development Authority Director Aundi Lesley checks out some information about the Broad Street community from her office in the Carnegie Building.

Rome’s Downtown Development Director Aundi Lesley (left) introduces herself to Doug Bowling, owner of Doug’s Deli Downtown, on Broad Street. Getting to know the downtown merchants has been a top priority for Lesley, who took over the post last month.

New Rome Downtown Development Authority Director Aundi Lesley checks out some information about the Broad Street community from her office in the Carnegie Building.

Rome’s new Downtown Development Authority Executive Director Aundi Lesley is excited about the opportunity to have a role in the ongoing renaissance of downtown Rome.

On the job a little less than a month, Lesley said her focus is still on getting to know the merchants and property owners before trying to analyze how she can best help move downtown forward.

Lesley came to Rome from a job with the Small Business Development Center at West Georgia in Carrollton. She was only in that post for seven months after spending time as director of the Main Street program in Carrollton.

She brings the unique perspective of a person who has worked closely with downtown business leaders and an economic development consultant with the SBDC. That was something which Assistant City Manager Patrick Eidson has indicated was very attractive to city leaders during the search to replace Amanda Carter as the DDA leader in Rome.

When she was fresh out of college she went to work for a retail cosmetics consultant. When she and her husband moved back to Carrollton from Atlanta she started volunteering with the Main Street program as a way to help get to know the community better.

“When that job opened up I applied for it,” Lesley said.

Learning about the job changed her perspective completely about shop local campaigns. Jobs are at stake, she said. When people choose to not shop local, then local businesses don’t make their mortgages and fold.

“The events were fun, but the economic impact and development became a passion of mine,” Lesley said.

In that role she would come to Rome frequently to visit with Ann Arnold and participate in several training exercises.

“The first time I came I think I took four or five full 8½ by 11 pages of notes, writing everything down,” Lesley said. “I saw how a downtown development authority truly can become successful.”

She took a lot of the ideas back to Carrollton and was able to implement some of the programs Rome already had in the works.

“In the Georgia Street community they call it R&D, rip-off and duplicate,” which is pretty much what I did,” Lesley said.

With her heart set on assisting with economic development, Lesley decided to accept a position with the Small Business Development Center at the University of West Georgia in January.

She believes the network of SBDC facilities across Georgia is a well-kept secret, though she lauded the center in Rome managed by Richard Montanaro for its work throughout the community and region.

“The SBDC has access to resources to really equip a business owner in ways they might not understand or have studied in the past,” Lesley said. “I knew I wanted to help merchants and small business owners in that way and it really was incredible.”

When the Rome job came open she said she just had to apply for it.

“This is my dream job, my dream community,” Lesley said. “I’m thrilled to be here.”

At this point, she is still commuting from Carrollton and is looking forward to resettling in Rome soon.

Lesley said the Rome downtown community is larger than Carrollton. The committee structure of the Rome DDA is something she tried to duplicate without a lot of success in Carrollton.

“People (in Rome) are eager to participate and volunteer their time to be a part of what is going on downtown,” she said. “You don’t find that everywhere.”

She’s been doing a lot of research into the Rome renaissance, poring over DDA minutes from previous years and trying to get herself up to date with what has happened over the last couple of decades in Rome.

One of her first, and ongoing tasks, has been to reach out to open lines of communication with both property and business owners.

“I want to let them know that I’m here to support them in any way that I can,” Lesley said. “That has been very well received.”

After just a couple of weeks in the community, Lesley said she has seen and heard some of the interest in having a grocery store close to the core of the downtown district to support the growing number of residences.

“As far as vacancies go I’ve been pleasantly surprised,” Lesley said. “In light of everything that 2020 has brought our way, I think the vacancies could be a lot worse.”

She said that some property owners have told her they had some tenants lined up before COVID-19 happened who then put their plans on hold.

“Given the current economic challenges and that a lot of people are still unemployed and don’t have the same income to be spending with our downtown businesses I think we’re in pretty good shape,” Lesley said.

Being active in the recruitment of new businesses will be a big part of her job, but she wants to work closely with both the Business Development and Outreach committees of the DDA to help fill needs in the central business district.

She fully understands the balancing act that comes with the emphasis on residential development, entertainment, job growth and traffic — but wants to hold off on a discussion of those issues until she gets better acquainted with all of the players.

“I’m still learning and observing. I might have more to say about that later,” Lesley said.

She is looking forward to working on the 2021 work plan with an understanding that much of the 2020 plans are likely to roll into the coming year.

When she’s not in the office, Lesley loves spending time with her husband and toddler son.

“Hopefully we’ll be in Rome soon,” Lesley said. “I’ll have a lot more time on my hands when we actually move up here.”

The Latest: US extends ban on cruise ships through October