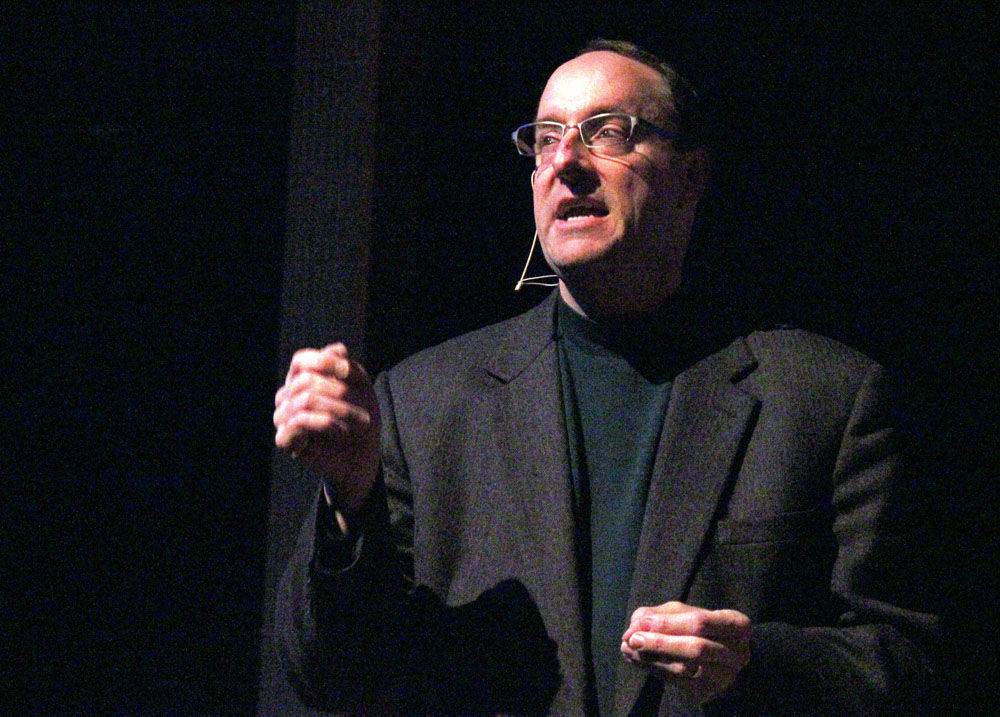 Chris McKinney, associate vice president for innovation/commercialization at Augusta University, spoke at the 2015 Confluence Conference and will be back this year talking about immunotherapy. (Photo contributed, Chamber of Commerce) 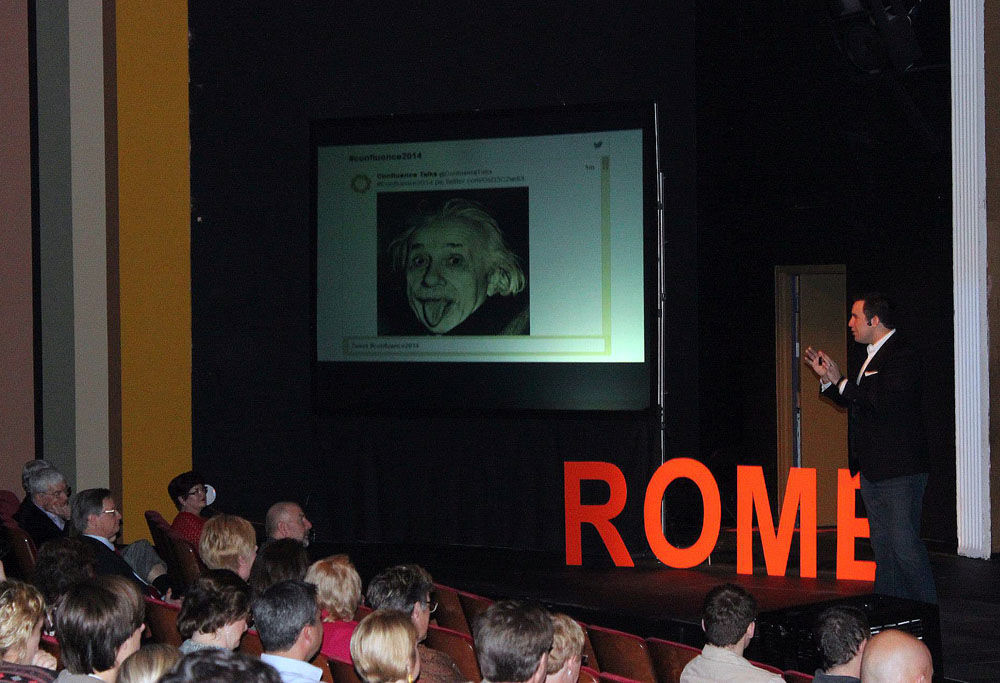 David Berkus, keynote speaker at the 2014 Confluence Conference spoke about myths of creativity to participants. (Photo contributed, Chamber of Commerce) 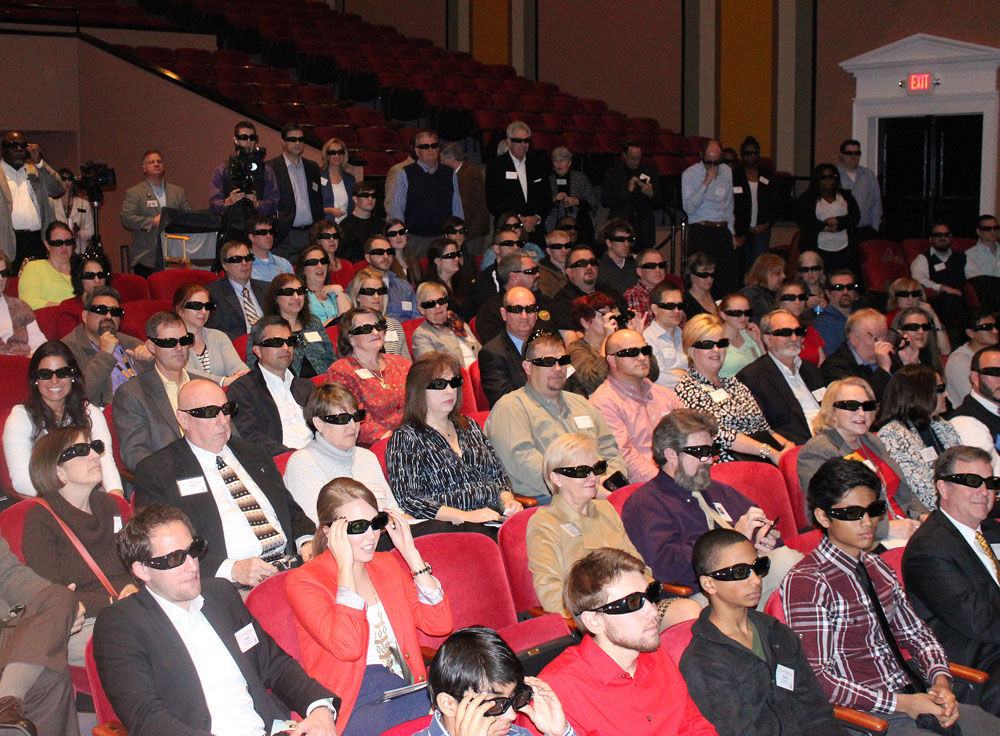 The crowd at the 2014 Confluence Conference donned 3-D glasses for a presentation done by Vizitech USA LLC. (Photo contributed, Chamber of commerce)

Chris McKinney, associate vice president for innovation/commercialization at Augusta University, spoke at the 2015 Confluence Conference and will be back this year talking about immunotherapy. (Photo contributed, Chamber of Commerce)

David Berkus, keynote speaker at the 2014 Confluence Conference spoke about myths of creativity to participants. (Photo contributed, Chamber of Commerce)

The crowd at the 2014 Confluence Conference donned 3-D glasses for a presentation done by Vizitech USA LLC. (Photo contributed, Chamber of commerce)

Downtown Rome will once again be a hub for innovation and high-tech inspiration, with the Confluence conference set for Thursday and Friday.

The gathering, sponsored by the Greater Rome Chamber of Commerce, will be based both days at the DeSoto Theatre, 530 Broad St.

The keynote presenters include Will Harbin, a native Roman who is now chairman and CEO of Kixeye Inc., based in San Francisco.

Others are Cordell Carter II, CEO of the Techtown Foundation Inc.; Robert McNally, president and CEO of GeoVex Labs; and Sarah Hays Coomer, a certified personal trainer and author.

“The type of speakers and content, the leaders that we’re able to bring here, not only enrich the residents of Rome, but we’re finding that many folks come from outside the area to attend an event like this,” Devine said.

Coomer, who calls herself a “diet abolitionist,” will kick off the conference Thursday at 9 a.m. A member of the American College of Sports Medicine, she focuses her programs on health and creativity. Coomer believes that good health goes a long way toward enhancing the mind’s ability to be creative.

Carter’s Techtown Foundation is a technology and arts education center, which offers aspiring innovators access to state-of-the art technologies and training. He was named one of nine White House Champions of Change for Computer Science Education. His program is expected to focus on how computer coding is a source of empowerment in today’s technology-based world.

Carter’s presentation is scheduled for Thursday at 10:45 a.m.

Robert McNally heads GeoVex Labs, a biotechnology business focused on the development of important vaccines. His presentation will examine the processes that go into the development of vaccines for diseases such as the Zika virus, HIV and Ebola. McNally will speak at 2 p.m. Thursday.

Chamber President Al Hodge said McNally’s presentation is very timely in light of the worldwide concern about the Zika virus — borne by mosquitoes but now also being transmitted by sexual contact.

“His star is continuing to rise,” Hodge said.

Harbin will start Friday’s program at 8:15 a.m. He is a developer and publisher of online games and a leader in the free-to-play gaming industry. Games in the Kixeye portfolio include Backyard Monsters, Battle Pirates, VEGA Conflict and War Commander.

Before Kixeye, Harbin co-founded Affinity Labs, which helped create a worldwide network of online communities. Harbin was also a co-founder of Function Drinks and Media1st. Function Drinks is an all-natural beverage developed by physicians while Media1st was a leader in online education and video streaming.

The 2016 Confluence conference will also feature a large number of local presenters — including JoAnn Moss, principal of the Elm Street Elementary School; Paula Englis, chair of the department of management in the Campbell School of Business at Berry; Mark Cochran, a Rome architect and founder of Cevian Design Lab; and Anthony Johnson, general manager of Lowe’s Regional Distribution Center in the North Floyd Industrial Park.

Moss will be discussing STEM education — science, technology, engineering and math — at Elm Street, where first- graders started Sugar Kids Beauty. The students make the bath and body products, then package, market and sell them and manage the business. Moss will speak at 11:15 a.m. Thursday.

Cochran designed and built his own home in Armuchee using LEED — Leadership in Energy and Environmental Design — principles. He will speak at 3:15 p.m. Thursday.

Johnson will focus on transportation and logistics. Hundreds of trucks go in and out of the Lowe’s center off Ga. 140 north of Rome every day. Johnson will make the final Thursday presentation at 4:30 p.m.

Angela Devine, coordinator of small business and entrepreneurial programs at the Chamber, said more than 300 people have registered to attend the conference.

The DeSoto Theatre is capable of accommodating approximately 500 people.

Tickets can be purchased online at www.romega.­com. The cost is $50 for Chamber members, $75 for nonmembers and $30 for students and educators.

All ticket prices include a $10 meal voucher, which can be redeemed at any of eight Broad Street restaurants: Harvest Moon, Schroeder’s, Brewhouse Music and Grill, Partridge, Jamwich, Jefferson’s, Mellow Mushroom and Johnny’s New York Style Pizza.