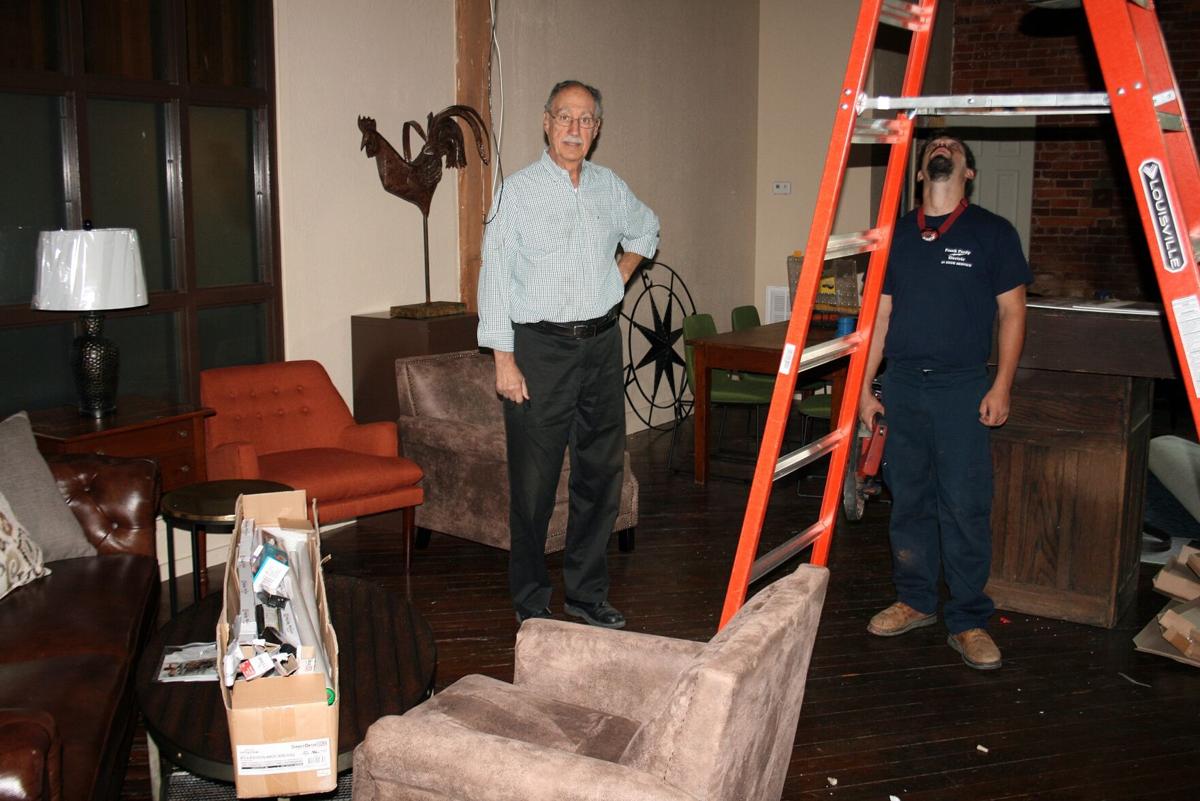 Entrepreneur Ira Levy looks over renovations to a commons area in the Hawthorn Suites by Wyndham hotel. Levy has played a key role in the redevelopment of half a dozen commercial properties in downtown Rome over the last 25 years. 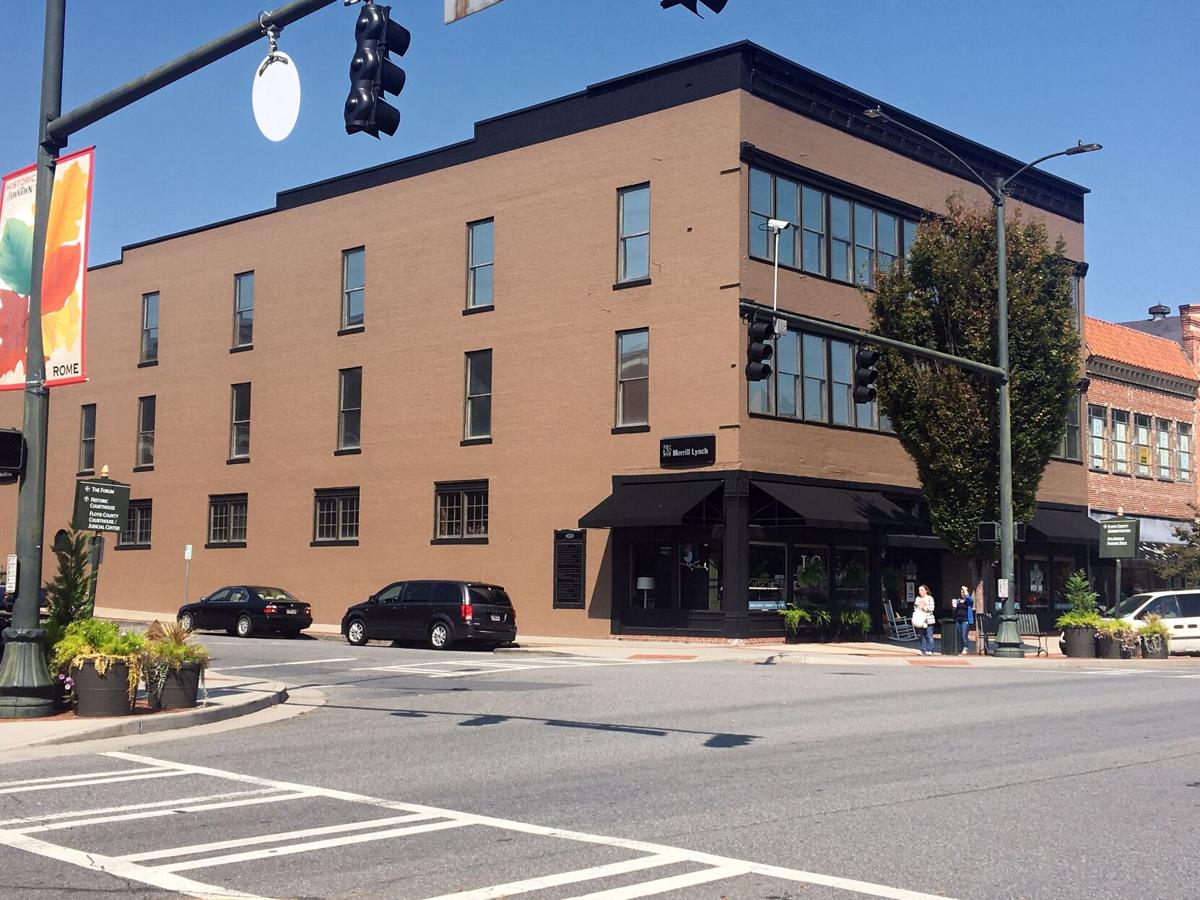 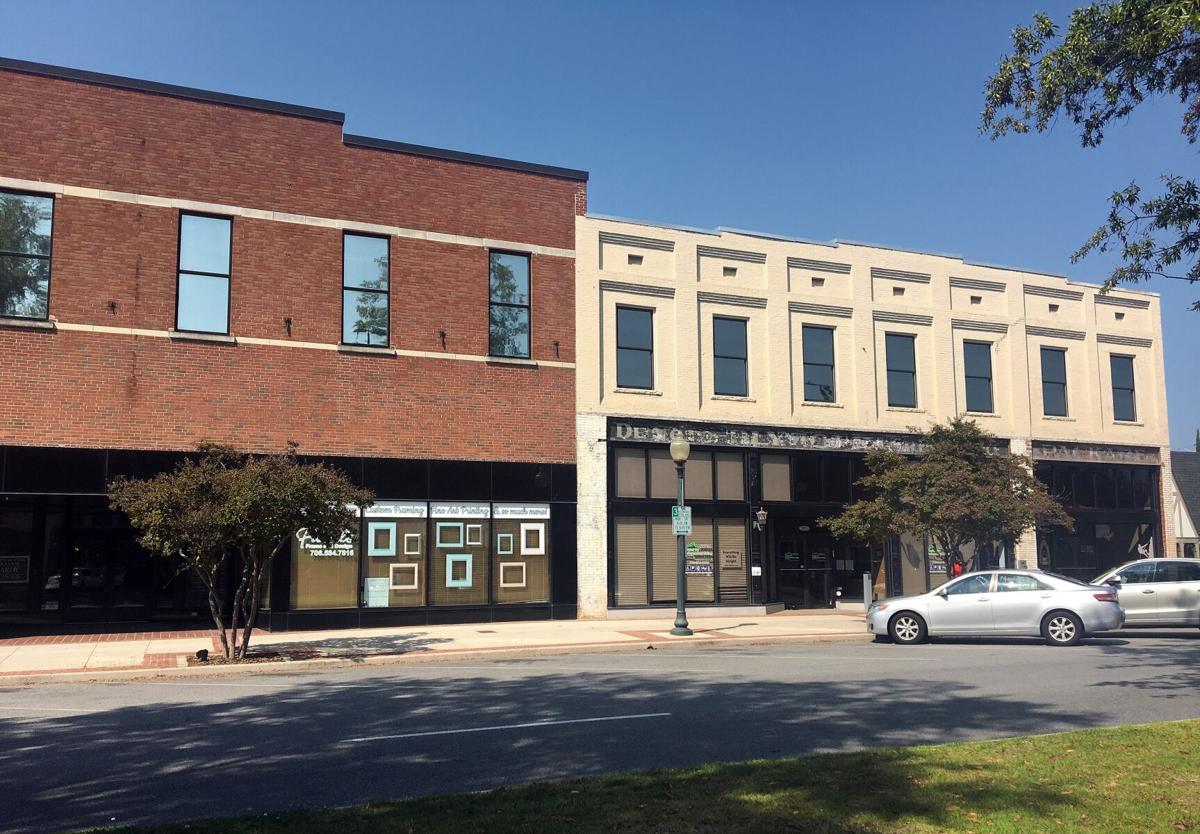 The former Adams Furniture building (left) and Atlanta Gas Light facility have both been renovated thanks to Ira and Libby Levy.

Entrepreneur Ira Levy looks over renovations to a commons area in the Hawthorn Suites by Wyndham hotel. Levy has played a key role in the redevelopment of half a dozen commercial properties in downtown Rome over the last 25 years.

The former Adams Furniture building (left) and Atlanta Gas Light facility have both been renovated thanks to Ira and Libby Levy.

Take a stroll up or down Broad Street and the hand of Ira Levy can be seen from one end of the business district to the other. From the original renovation of the old Heilig-Meyers building in the 400 block to The Lofts at Third & Broad, Levy has been a leading artist in the renaissance of downtown Rome.

Not that he hasn’t asked the for tax allocation district financing assistance. Yet Levy, with the help of different investors from time to time, has forged ahead with project after project.

“I’ve got big shoulders,” he said.

While Levy has gotten much of the ink for the work downtown, he would be the first to tell you he couldn’t have accomplished anything without the aid of his wife, Libby Levy. The couple was honored by the Georgia Trust for Historic Preservation in 2017 for 30 years of preservation work in Rome.

“We like to preserve the history of a building,” Levy said. Once your history is gone, what do you have?”

“He took the lead when others didn’t,” said Ann Arnold, the former director of the Downtown Development Authority who retired in 2017. “He saw all of the potential when others didn’t — and he didn’t do it once or twice or three times, he kept on doing it.”

Levy pointed to the craftsmanship of the timbers in his Hawthorn Suites by Wyndham and said construction techniques like those visible inside the hotel just aren’t taught anymore.

It could be, then, that there is a bit of irony in Levy’s latest development to come on line, The Lofts at Third & Broad.

Levy demolished an old building that once housed Top Hat Formal Wear because it was just too far gone to be preserved. His original concept was to redevelop the lot with something that had the look of the old Third Avenue Hotel.

After nearly a decade of architectural work, financial wrangling, and perhaps most publicly, wrangling with the Historic Preservation Commission, the project was opened last year.

For numbers geeks, that’s a 3,740% increase in tax revenue for the city and county in 12 months.

“That’s total taxes on everything. That’s what was sitting there Jan. 1,” said Tax Commissioner Kevin Payne. “He’s probably sold more (units) and that value will go up a lot. I imagine they were valued and then they probably sold for more than what they are valued at.”

The Lofts building has 26 condominiums and four retail spaces, all of which are being sold, not leased, to individual owners.

At this point, seven of the condominiums remain on the market. Once those are sold, Levy will be able to turn his attention elsewhere. Jimmy Byars at Hardy Realty said five one-bedroom condos are still available along with a pair of two-bedroom units.

In between the old Heilig-Meyers building and The Lofts came renovation work at the old Forrest Hotel in the 400 block of Broad Street, now the Forrest Place Apartments. And the transformation of the former Battey Machinery building on Second Avenue into a Hawthorn Suites by Wyndham hotel. And renovations to the former Adams Furniture and Atlanta Gas Light buildings, which sit side-by-side in the 500 block of Broad Street.

Arnold said Libby Levy has been the design expert, by her husband’s side at every turn.

“She took the lead at the apartments, the Forrest Hotel,” Arnold said.

Libby Levy also made sure the ballroom on the first floor of the building was restored to its former glory, to maintain a special event and social space. Arnold also said Libby Levy played a huge role in making sure every room inside the Hawthorn Suites is representative of Rome and unique in its own way.

Ira Levy said that some of the buildings he’s undertaken could very easily have been termed blighted properties.

He pointed to the old Battey Machinery building as a prime example. It had been converted into an apartment building known as Rivers Place back in the 1980s. Then it fell dormant and had been vacant for nearly a decade before a Levy-led group took ownership.

“Look at the revenue stream, tax stream, we’ve turned it into for the city and county,” Levy said. “We asked for a TAD back then and we were told no.”

Levy still has plans for an expansion of the Hawthorn but they’ve been changed a number of times.

In fact, the project was out for bid before COVID set in. But Levy said construction costs are up about 30% now so he’s waiting until prices come down somewhat.

He’s also scaled back plans for the building in the wake of Berry College’s plans for a new hotel adjacent to the tennis center. Levy said a lot of the business he’s had at Hawthorn through the years has been related to activity at the college and he suspects a lot of it will go to the new Berry Fairfield Inn & Suites, once it is completed a year from now.

The latest plans for the Hawthorn expansion call for an additional 24 rooms with a 225-seat banquet room.

The Levy footprint also extends over to the new River District. He owns the former Bernard Neal building on West Third Street that sits next to the 2-acre tract the city has been marketing for new development for several years.

At one point Levy submitted a proposal for the city-owned acreage, but his idea didn’t pass muster with city officials. Levy said he is still interested in the property and has some ideas as to how it might best be developed.

“I presented one plan to them that they didn’t like, for whatever reason,” Levy said.

Before he and his wife started redeveloping commercial properties, they were involved in the renovation of more than a dozen residential properties. Many of them in the Between the Rivers Historic District had been divided into apartments over the years.

“We turned a lot of houses that were multifamily back into single family,” Levy said.

When he’s not making improvements to property in downtown Rome, Levy runs Paper Recovery of Georgia on East Sixth Street, adjacent to the Oakdene Historic District. At one time his recycling center was a long dormant industrial space. It had previously been home to Atlanta Stove and Foundry as well as U.S. Plywood.

Originally from the Chicago area, Levy said he and his wife settled in Rome largely because of the quality of life.

“Rome is very unique; it has a lot of history. It has a lot of the arts here, a great medical community, good shopping,” said Levy. “We’ve got to keep up with the times to keep the youngsters as they graduate. Some of them will move away, but a lot of them come back because Rome is a great place to raise a family.”