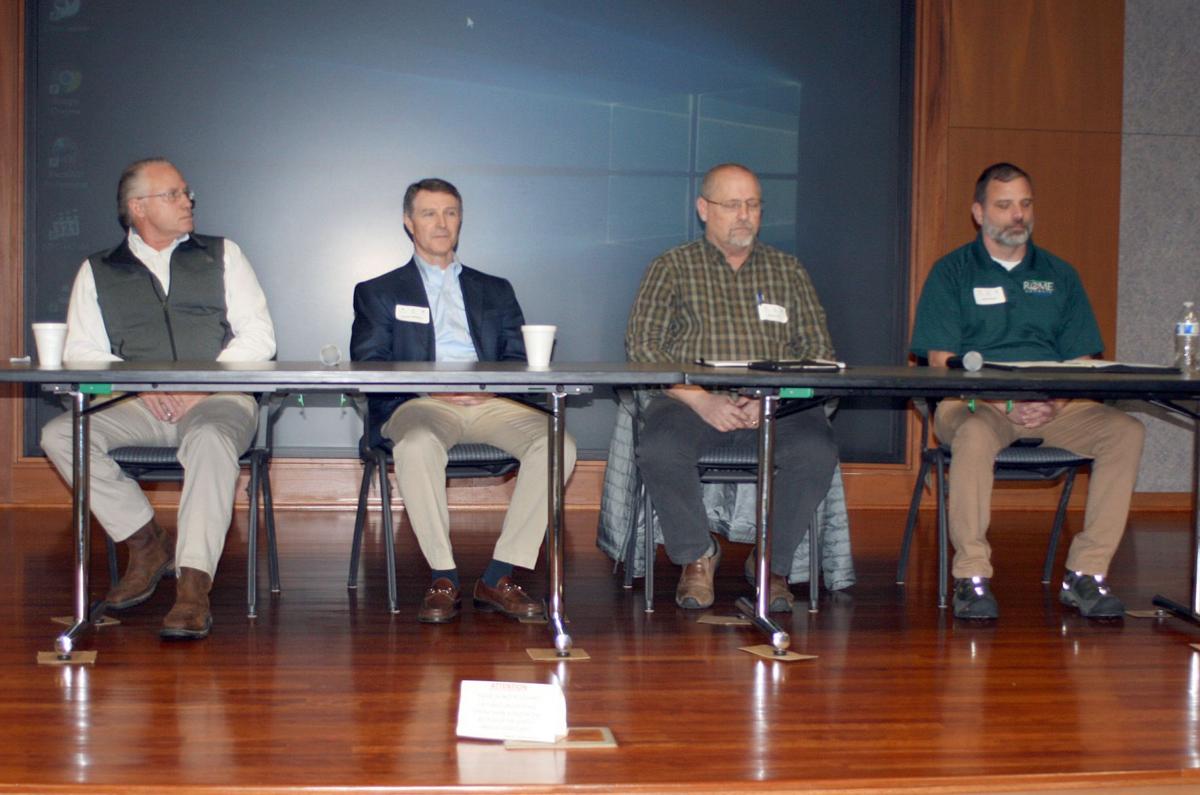 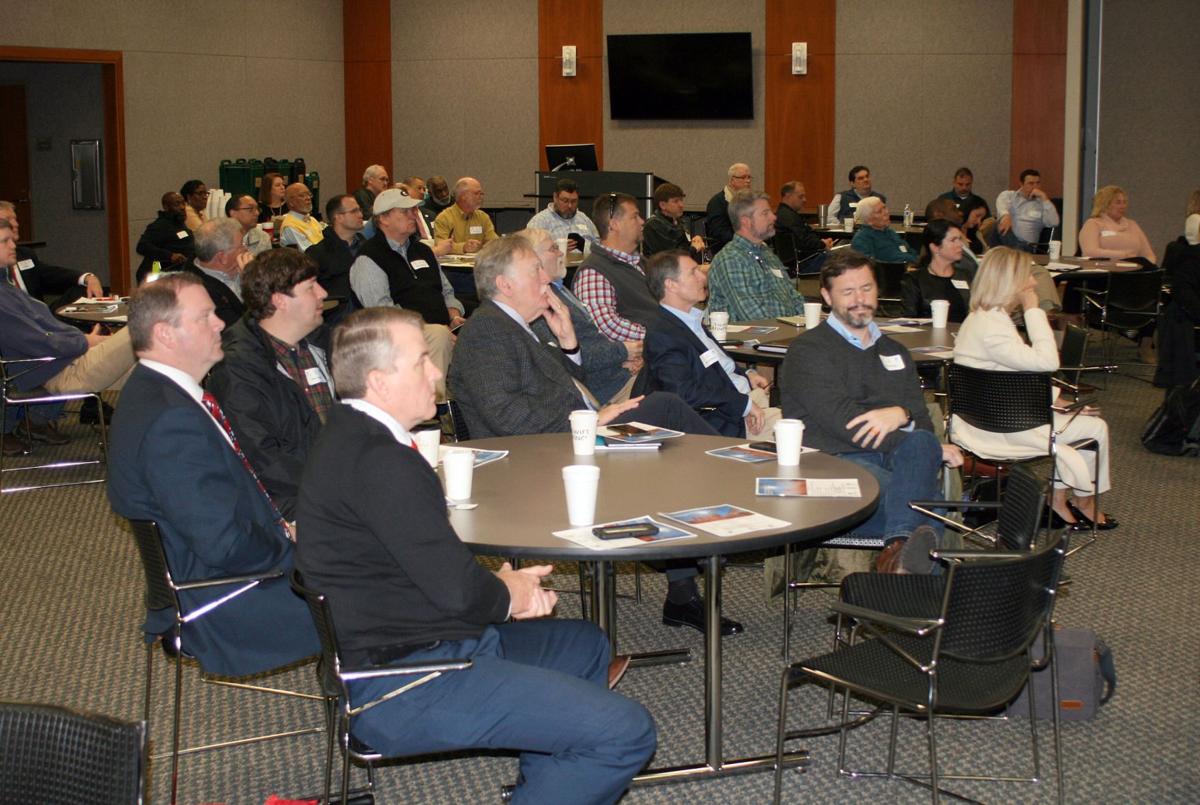 A large crowd filled the auditorium at Georgia Northwestern Technical College in Rome on Thursday for a summit to consider the housing shortage in the Rome area and other communities across the region. 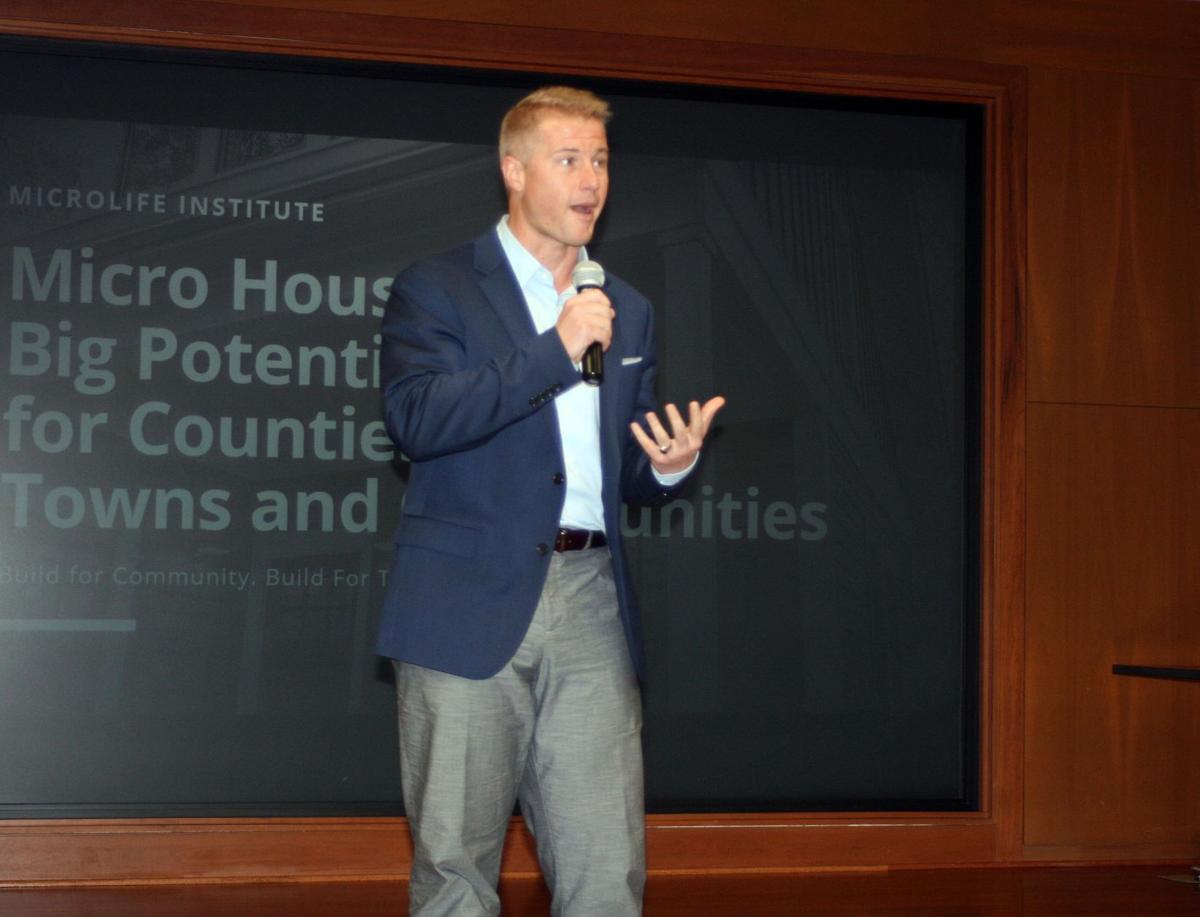 Will Johnston with the Microlife Institute tells attendees at a housing summit in Rome that 41% of professionals who responded to a Microlife survey said they would prefer to live in smaller homes. 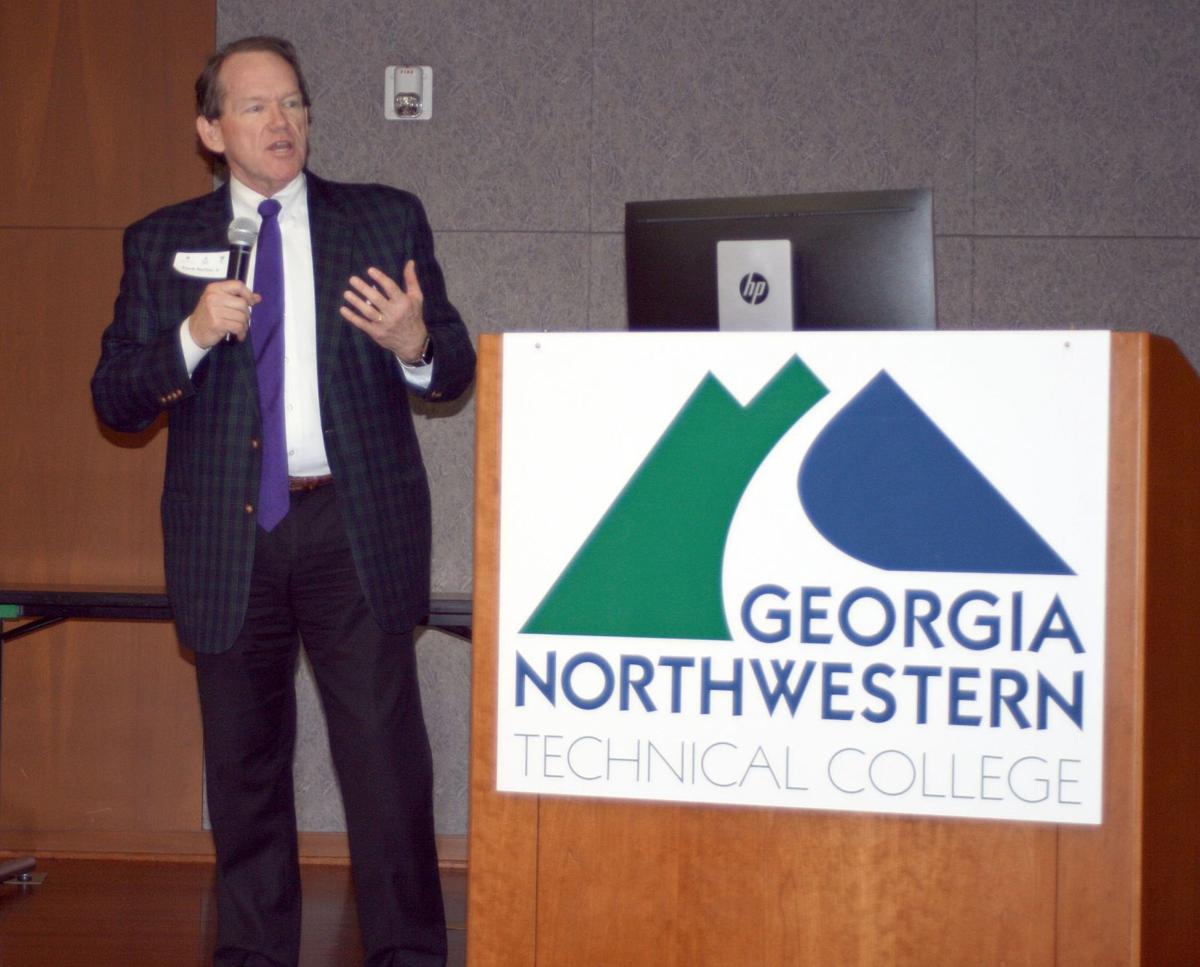 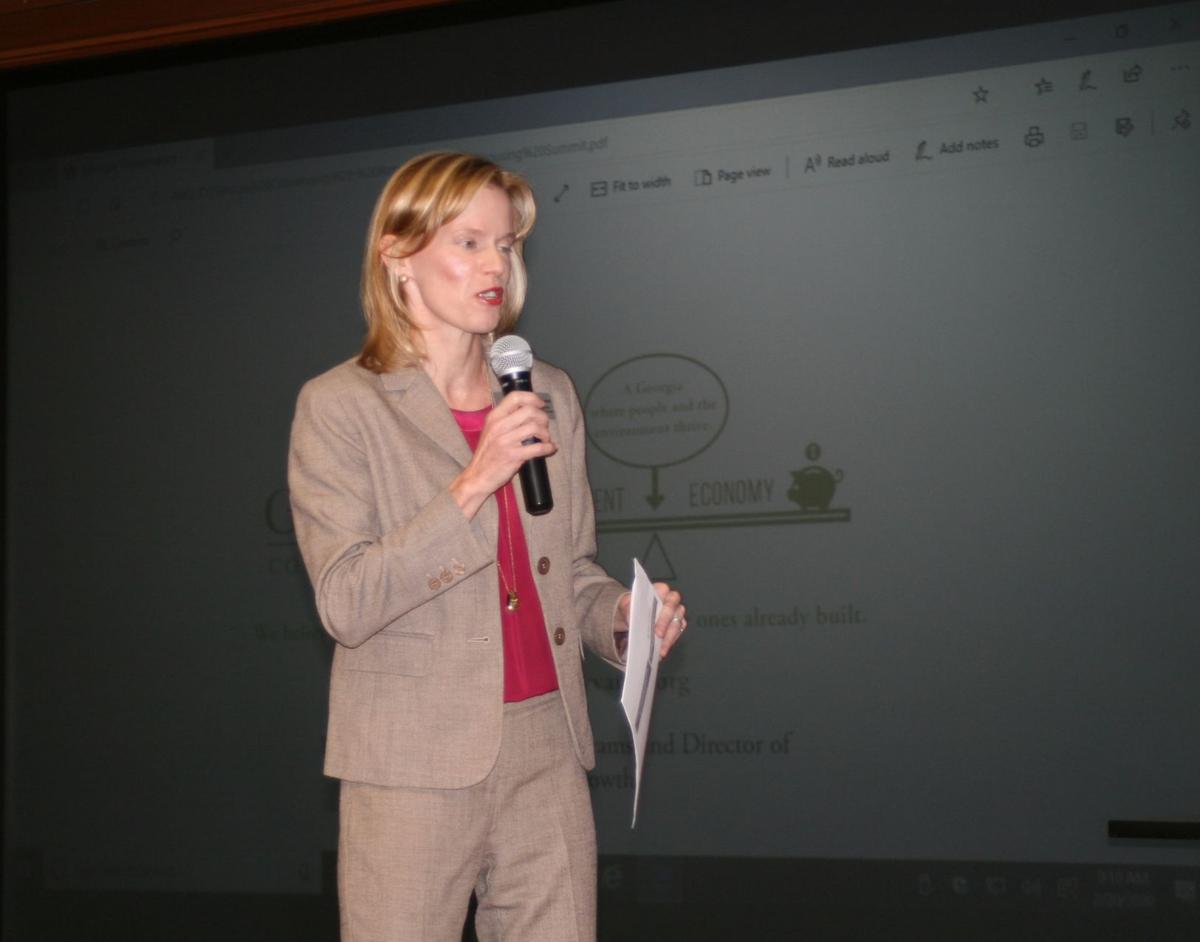 Katherine Moore with the Georgia Conservancy tells housing summit participants in Rome last week that by 2030, 83% of households will not have children in them, questioning the need for large homes.

A large crowd filled the auditorium at Georgia Northwestern Technical College in Rome on Thursday for a summit to consider the housing shortage in the Rome area and other communities across the region.

Will Johnston with the Microlife Institute tells attendees at a housing summit in Rome that 41% of professionals who responded to a Microlife survey said they would prefer to live in smaller homes.

Katherine Moore with the Georgia Conservancy tells housing summit participants in Rome last week that by 2030, 83% of households will not have children in them, questioning the need for large homes.

It took five hours into a major housing summit in Rome before the chicken and egg question was raised.

Does a community address housing issues before attracting new industry or does it wait to build until they’ve got the jobs and people to fill the homes?

It’s a question important enough to draw an auditorium full of builders, bankers and economic developers from across Northwest Georgia to the campus of Georgia Northwestern Technical College for a day-long conference Thursday.

“In order to have people, we’ve got to have housing,” said Rope Roberts, a Georgia Power community development specialist from Northeast Georgia. “There’s not one silver bullet answer that’s going to solve it. It’s going to take a lot of 5% solutions.”

Roberts served as a facilitator for the discussion. Among the speakers was Will Johnston of the Microlife Institute in Atlanta.

“The American Dream is dead because people can’t afford it,” Johnston said.

He raised the question of why houses across America have gotten larger and larger while families are getting smaller and smaller.

“We are building houses for Chamber of Commerce magazines,” agreed Frank Norton Jr., an architect and developer out of the Gainesville area.

Katherine Moore with the Georgia Conservancy said that by 2030, 83% of households will not have children. But over the last several decades, she said, between 75% and 90% of housing starts have tended to be in conventional subdivision-style neighborhoods.

“Does this reflect who we are and what we need?” Moore asked.

Using 2018 numbers, Moore explained that when examining the workforce and housing, over 50% of Georgia’s workers earn $19 an hour or less.

“What can these folks afford in terms of rental or purchase and does that exist in your community?” she asked.

Floyd County Commissioner Allison Watters said she was particularly glad to see someone put an emphasis on the disconnect between wages and housing costs.

Moore, Norton, Johnston and Frank Furman with Padsplit were unanimous in their belief that multiple options for quality affordable housing are important for any community to grow.

The proximity of housing to where people want to work and play was also something Moore said is an issue that needs to be addressed. One of the barriers to that could be zoning requirements relative to minimum lot size. She said allowing more density using existing infrastructure would be one solution.

Rome Water and Sewer Director Mike Hackett said the community needs to look at opportunities to build using existing utilities. He cited the Northwest Georgia Housing Authority’s apartment project on Charlton Street in Summerville Park as an example of the type of development that will meet a need.

“Everybody wants affordable housing but not right next to them,” Norton noted.

The Gainesville developer said that attitude becomes even more of an issue in light of data showing that for every two new jobs, at least one new home needs to be built.

Norton argued that eliminating a lot of governmental regulations would remove some of the cost barriers to new construction. He said the average cost of a new single-family house has increased 42% since 2010.

“We need to be stripping our codes today ... Across the country, regulations are adding 30% to 55% of the cost of housing,” he said.

Martin took some issue with Norton’s comment regarding regulations. He pointed out that several task forces made up of local building officials, developers and related personnel work on Georgia-specific updates to the various building codes all the time

Norton said the local housing shortage will only intensify, citing a Georgia Tech projection that the population of Greater Atlanta will grow to 12.5 million by the year 2050.

Johnston’s Microlife Institute is focused on helping communities live better using smaller spaces. He said the average American only uses about 250 square feet of their homes on a regular basis — the bedroom, bathroom and kitchen.

“Smaller spaces have a role, whether ascending or descending in life,” Johnston said.

A survey by the Microlife Institute that got more than 1,400 responses showed 24% of the respondents felt they could live in 500 to 700 square feet. Johnston said a surprise to him was that 41% of middle-aged professionals — not just post-college millennials or aging Baby Boomers — said they preferred to live in a smaller home.

Furman’s Padsplit is all about taking larger homes and converting them to shared housing opportunities.

He said the typical person who takes advantage of his housing option stays in a home for about eight months and is in their late 30s. Many of them use Padsplit to save enough money to buy their own homes, Furman said.

Martin surprised many in the room when he reported that there had not been any new multifamily housing permits issued in the unincorporated area of Floyd County in nearly a decade.

Asked directly if the community had enough housing to meet the current demand, Martin responded with an emphatic no.

Williams, whose firm specializes in multifamily housing, said a big gap exists between rental units at $500 or less and $800 or higher.

He also noted that the rapidly escalating cost of construction has become a serious issue for developers. His RiverPoint Apartments next to State Mutual Stadium, which cost approximately $120,000 per unit to build two years ago, would cost closer to $150,000 per unit to construct today, he said.

Ivey told the audience that stormwater runoff requirements are another large impediment to builders — prompting Norton to add that a settling pond requirement at a development in his area created a serious mosquito problem.

Williams suggested that communities could encourage housing construction with incentives and reduced fees. He said his RiverPoint Apartments could not have been built without the creation of a Tax Allocation District to help offset some of the infrastructure costs.

Rome-Floyd County Development Authority President Missy Kendrick — who helped organize the summit — said community leaders got a lot of good input from the meeting. She said they now have a better idea of the impediments to improving housing inventory and are ready to move toward finding some specific answers.

Disney Cruise Line to return to Bahamas, Caribbean and Mexico in 2023

Cynthia M. Allen: It’s one thing to mock COVID vaccine objectors. Must we rob their livelihoods, too?

Commentary: OK, boomers, you have the time, money and skills to work for the common good