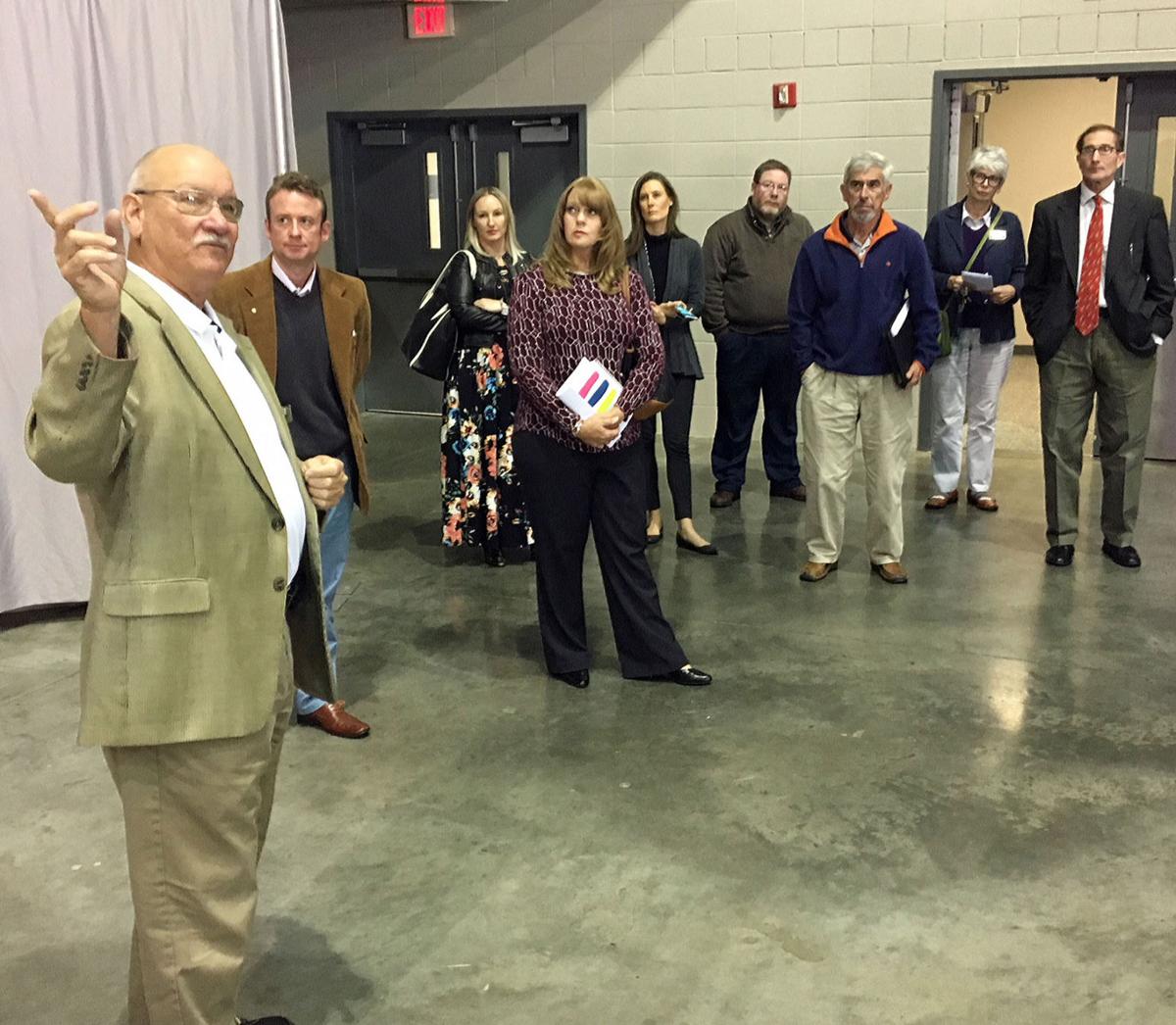 Safari Hospitality Vice President Mike Bankston (left) shows members of the Greater Rome Convention and Visitors Bureau improvements that have been made to the Forum River Center in this RN-T file photograph. 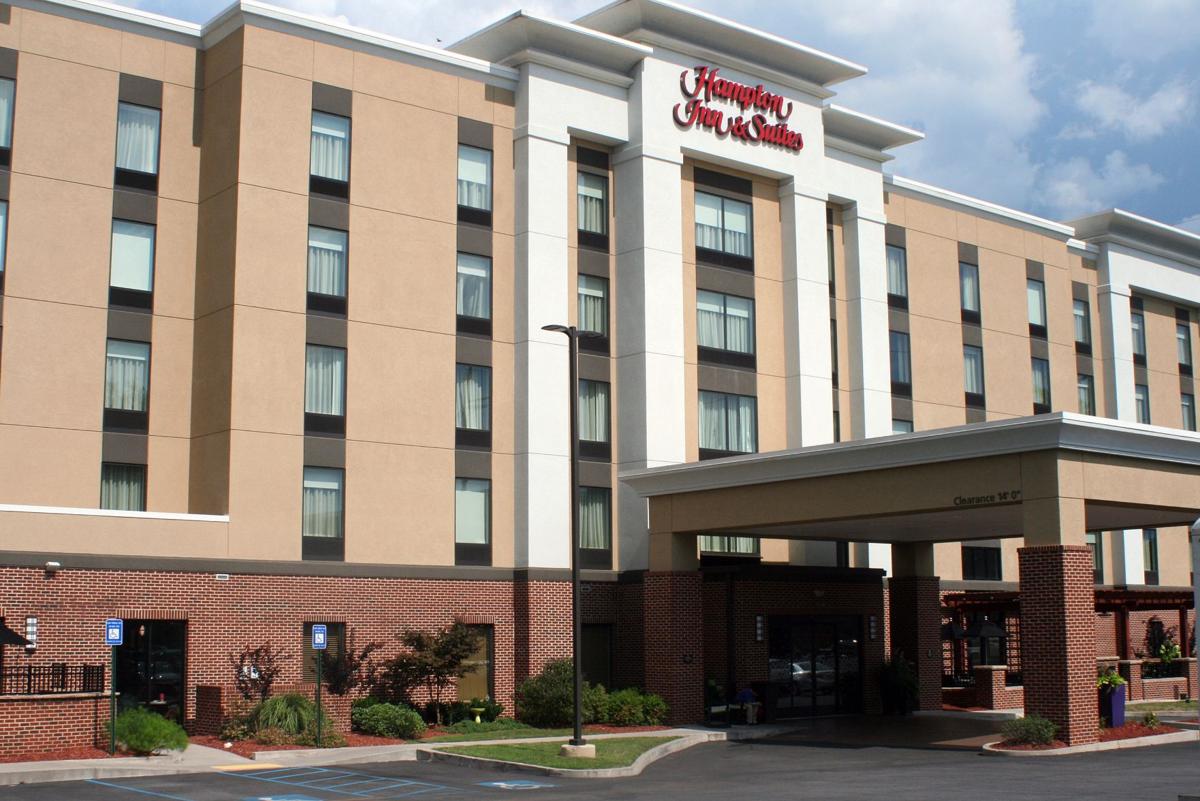 Sam Patel, one of the owners of the Hampton Inn & Suites in Rome, said his first priority throughout the pandemic has been to hang on to jobs for his staff. 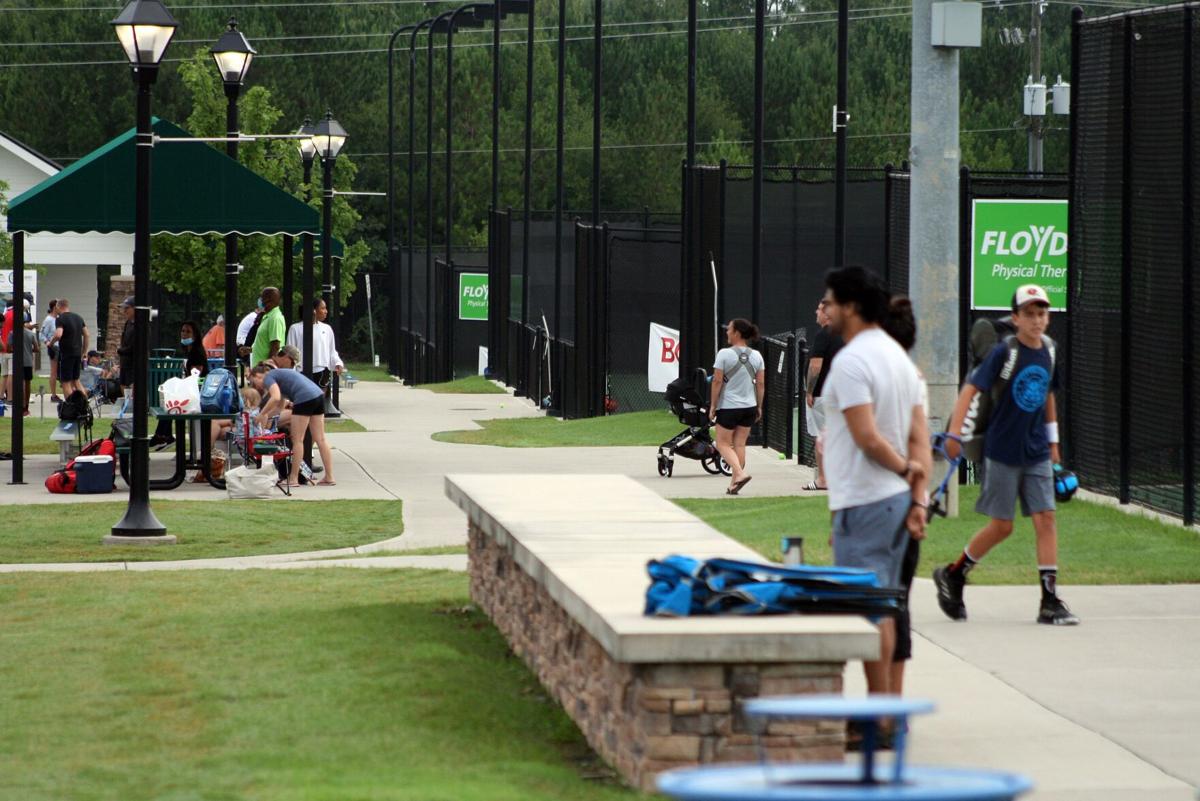 The Rome Tennis Center at Berry College was buzzing with activity during the Georgia Junior Open Doubles competition in August. Tennis has been a leading driver of sports tourism in Rome. 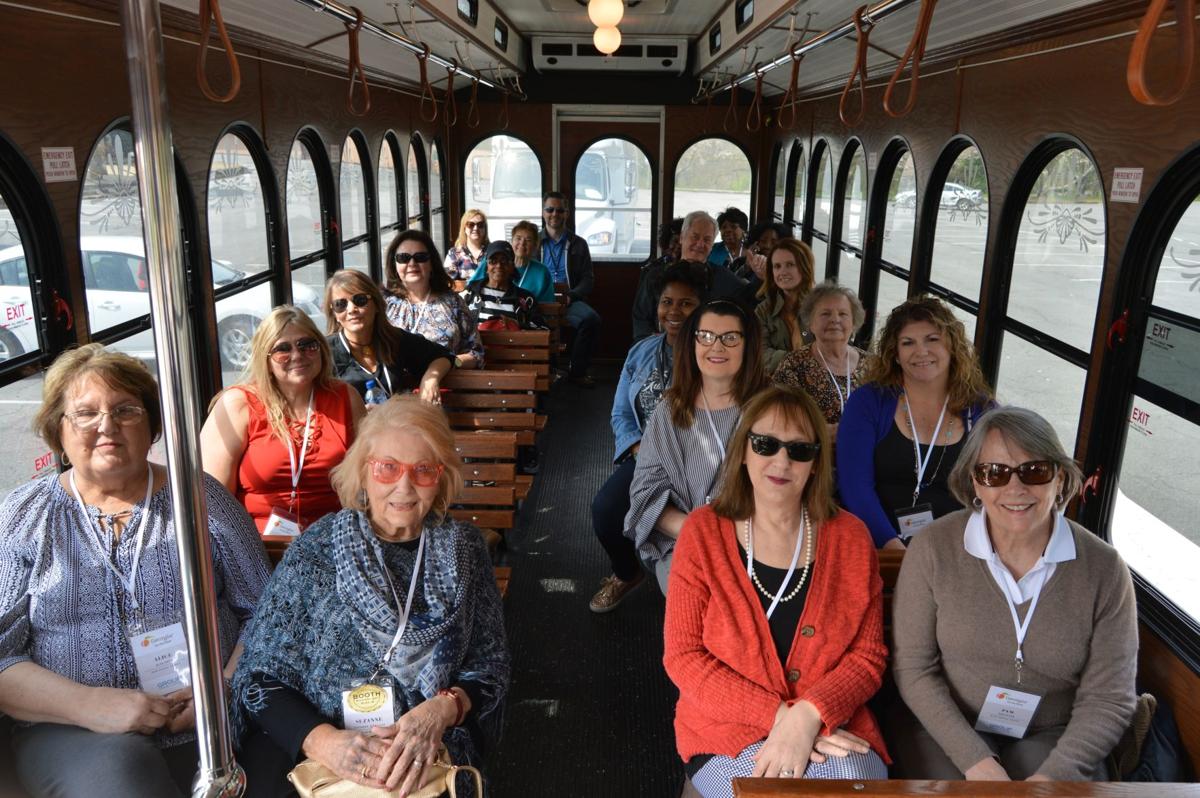 The tourism office hosted 25 group travel planners for a tour in 2019. The group visited attractions throughout Rome, Cave Spring and Floyd County during their visit. 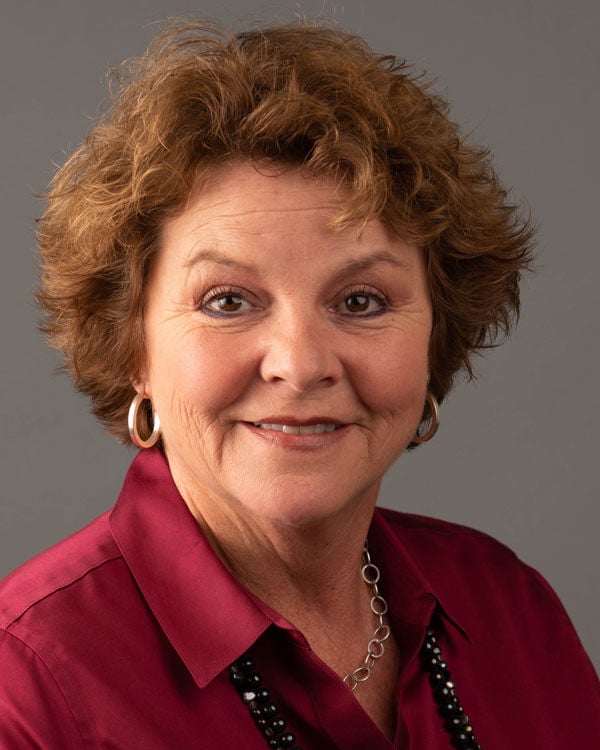 Safari Hospitality Vice President Mike Bankston (left) shows members of the Greater Rome Convention and Visitors Bureau improvements that have been made to the Forum River Center in this RN-T file photograph.

Sam Patel, one of the owners of the Hampton Inn & Suites in Rome, said his first priority throughout the pandemic has been to hang on to jobs for his staff.

The Rome Tennis Center at Berry College was buzzing with activity during the Georgia Junior Open Doubles competition in August. Tennis has been a leading driver of sports tourism in Rome.

The tourism office hosted 25 group travel planners for a tour in 2019. The group visited attractions throughout Rome, Cave Spring and Floyd County during their visit.

Tourism is a multimillion dollar industry in Rome and Floyd County, and few industries have been hit as hard by the COVID-19 pandemic. The lingering nature of the coronavirus has industry leaders scratching their heads about the future.

“Of course it concerns us,” said Lisa Smith, executive director of the Georgia’s Rome Office of Tourism. “But we have to continue to plan as if there is an end.”

Mike Bankston of Safari Hospitality, who oversees management of the Forum River Center in Rome, said the air of uncertainty that permeates everything has been crushing for the Forum.

“In the industry we’re in, we’re just having a hard time booking anything,” Bankston said.

He also said no decision has been made yet regarding a return of the popular holiday ice rink to the Forum this winter. It would be a gamble.

“It’s a huge investment, so we’re a little bit concerned. We don’t have any idea what kind of turnout we’d have,” Bankston said.

The Georgia’s Rome Office of Tourism annual report released in February indicates the agency generated more than $13.2 million in direct revenue for the community last year. That’s money that can be traced specifically to events the tourism office was involved with, whether through planning, promoting or hands-on work during the activities.

The U.S. Travel Association releases an annual report with ripple factor dollars — how tourism money sparks other spending within the community. In 2018, the number was $169,060,000 for Rome and Floyd County. The 2019 numbers have not been released yet.

Look for those numbers to take a significant dip in 2020.

An analysis of the events calendar alone shows that 59 events have been canceled between mid-March and the end of August. At least four more events are canceled for this fall. And that doesn’t even include things like the Chiaha Harvest Fair, the Trout Unlimited Chili Cook-Off, the Coosa Valley Fair and other local functions that bring people to Rome.

Smith said a critical part of her work the last five months has been continuing a dialogue with event planners who have rescheduled. She’s also pressing forward with folks who are still seeking to conduct events under conditions that might include social distancing and the wearing of face coverings.

The Georgia Fire Conference, an event local industry leaders have been trying to bring to Rome for years, has been snake-bitten.

The event was going to be the first big conference hosted by the Courtyard Rome Riverwalk in 2019. But the hotel wasn’t completed in time, so the event moved to Athens and was rebooked for this year. Then along came COVID-19. The good news is that it has been rescheduled for Rome in 2021.

The Going Caching geocaching mega event, which had been scheduled for the first weekend in October, has historically brought between 800 and 1,000 people to Rome from all around the world. Those folks filled local hotel beds and kept restaurants busy from Wednesday through Sunday.

Schnauzerfest, which held its inaugural event a year ago and was expected to grow significantly in its second year, also has canceled.

Economic impact data available for 2020 shows the Office of Tourism helped generate $268,705 direct dollars in January. The largest event was the Three Rivers Bull Riding Invitational, which brought $191,316 into the community

In February, direct revenues amounted to $495,219. The biggest draw in February was the United States Tennis Association Southern Icy Hots Junior tournament, which generated $168,020. March tourism events brought in $654,991, led by a Netflix filming project that generated more than $151,000. That’s when cancellations started to add up.

Every event on the tourism calendar for the months of April and May was canceled as a result of COVID-19. Two months of activity wiped completely off the books.

Thanks to youth baseball, activity started to pick up again in June. A baseball tournament during the first weekend of the month brought over 100 teams to Rome. Keep in mind that many of those teams were from the North Metro area and many commuted to and from their homes on a daily basis. The event still resulted in direct expenditures of $375,000.

Youth baseball events the third and fourth weekend of June brought in more than $460,000 on each weekend.

Hotel/motel tax revenue, earmarked for support of the Office of Tourism budget, has suffered — down 57.4% through the first seven months of the year.

“That’s pretty significant,” Smith said. “From the very beginning we’ve tried to be proactive in making reductions and cutting things, simple things that add up.”

Her continuing education has been slashed and she’s not been able to travel to hold face-to-face meetings with people in charge of events that she is bidding on.

“A lot of that could be done via Zoom, or phone calls or email, but nothing beats personal contact, which is how we build the relationships we have with meeting planners and people who bring events here,” Smith said.

Local hoteliers have generated $632,293 in tax collections through the end of July compared to $1,482,109 through the same period a year ago.

Smith said she is extremely proud of all the local hoteliers, in that none of them closed their doors.

“That wasn’t the case in many of the counties around us and many of the more highly traveled counties that are on interstates,” Smith said. “I just think that speaks volumes for our partners here.”

Sam Patel, an owner of the Hampton Inn in downtown Rome, said that keeping the doors open and hanging on to jobs for his employees has been priority No. 1. He said a lot of the employees have been with them since the hotel opened and the last thing he wants to do is lay off any of them.

“It’s been extremely brutal,” Patel said. “Hotels are very capital intensive businesses. We have a lot of expenses and we’re bleeding money every single day.”

Patel said that when the pandemic set in back in March, his company was thinking it might be a 90-day issue.

“We’re just kicking the can further along as the year goes by — and we don’t see any recovery at least until March of next year or when a vaccine comes out,” Patel said.

If there is a silver lining for the Office of Tourism, many of the events scheduled for the last quarter of the year are still on. And a new tennis tournament was added recently when the USTA moved its Southern Closed 12s event on Oct. 3-6 to Rome from Cary, North Carolina.

The Intercollegiate Tennis Association scrapped its NCAA Division II and III Fall Championships in Rome but the NAIA version of the event will continue as scheduled the third weekend of October.

The October report should also get a boost from the Wings Over North Georgia air show, which returns after a one-year absence. It will be a tailgating type of event, to limit exposure to crowds.

“We’re trying to figure out how to reinvent ourselves,” Smith said.

In the last year, Smith’s office has taken over operations at the Rome Tennis Center at Berry College and the Rome History Center downtown — which has stretched her staffing.

If there is any consolation, Smith said, “Everybody in Georgia is in the same boat.”