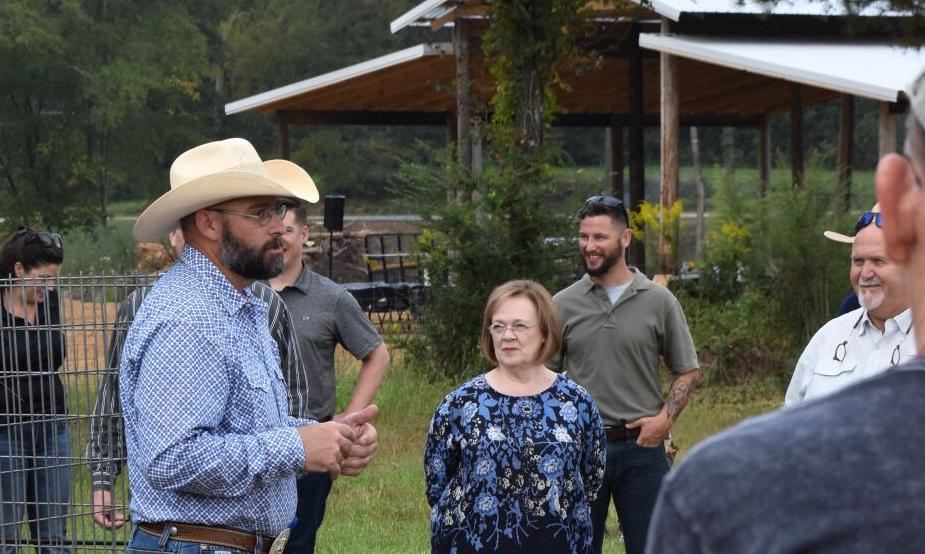 Hero Agriculture founder Mike Reynolds explains to a crowd the types of farming programs the organization offers to veterans struggling to find their way back in civilian life.

Hero Agriculture founder Mike Reynolds explains to a crowd the types of farming programs the organization offers to veterans struggling to find their way back in civilian life.

CALHOUN — After being critically injured during a combat deployment to Iraq in 2009, Mike Reynolds was forced to retire from the military.

After struggling to find his way as a civilian back home in Northwest Georgia, farming eventually became Reynolds’ purpose. Having spent time away from his family rehabbing at the Shepherd Center, that newfound purpose ended up being quite a long journey that took some work and determination. Now he intends to help offer that same path to other veterans.

Reynolds’ vision led to the founding of Hero Agriculture, an organization that aims to to help veterans readjust to civilian life by learning to farm in one capacity or another.

“Mike called me the early part of last year about this thought he had about Hero Ag, and after hearing him I couldn’t help but get on board with it,” said Hero Ag CFO and board member Bill Gleaton. “I can’t think of a better thing we can do for our veterans then to help support them and to try and give them a new mission and hope for their life going forward.”

Hero Ag not only educates veterans in farming and agriculture, but also helps to foster networking with the intent to help them create successful business ventures in the field.

“We’re not just teaching someone to plant corn, to move cattle or to tend goats,” said Nate Tyre, the attorney who originally helped Reynolds set up the nonprofit. “We’re also helping to bring the community to that veteran and bring the support structure that we have as a family.”

Saturday, Hero Agriculture hosted an open house at their facility on Roland Hayes Parkway to share what they do and how veterans can be successful farmers and business owners through that program.

“There’s a lot of connection between military service members and farmers,” said Perry Young, who was injured in a suicide bomber blast in Afghanistan in 2013. “Farmers help each other, they lean on each other. They help each other with knowledge on how to do all this stuff ... and survival. And you do the same in the military.”

Young, who is now in a wheelchair, is not only working with Hero Ag to find innovative ways to help him have the ability to farm his land, but has also been receiving assistance with things like navigating the Veterans Administration process when he hits a roadblock.

The open house had several demonstrations for those on hand, such as a livestock roping and management. There was also a veterans discussion panel led by Atlanta business executive Michael Coles and Stacy Campbell of Kennesaw State University, as well as a lunch.

Also on hand was state Rep. Matt Barton, R-Calhoun, who said he hopes to stay involved with Hero Ag as it grows.

“First time I met Mike was actually at McDonald’s and he hit me up,” Barton said.”He’s always going to hit you up if he’s wanting to get something done. He’s not going to stop, he’s going to persevere .. and that’s the character of a veteran. Hopefully I can be an advocate for some of the hurdles that he may have. It’s a special project and it’s great to see so many people out there.”

The organization also unveiled its plans for an on-site veterans center, a project that will eventually house a Hero Ag meeting room for the program’s participants.

To learn more about Hero Agriculture, including ways to assist with the organization’s mission, visit HeroAg.com or call 706-459-1911.