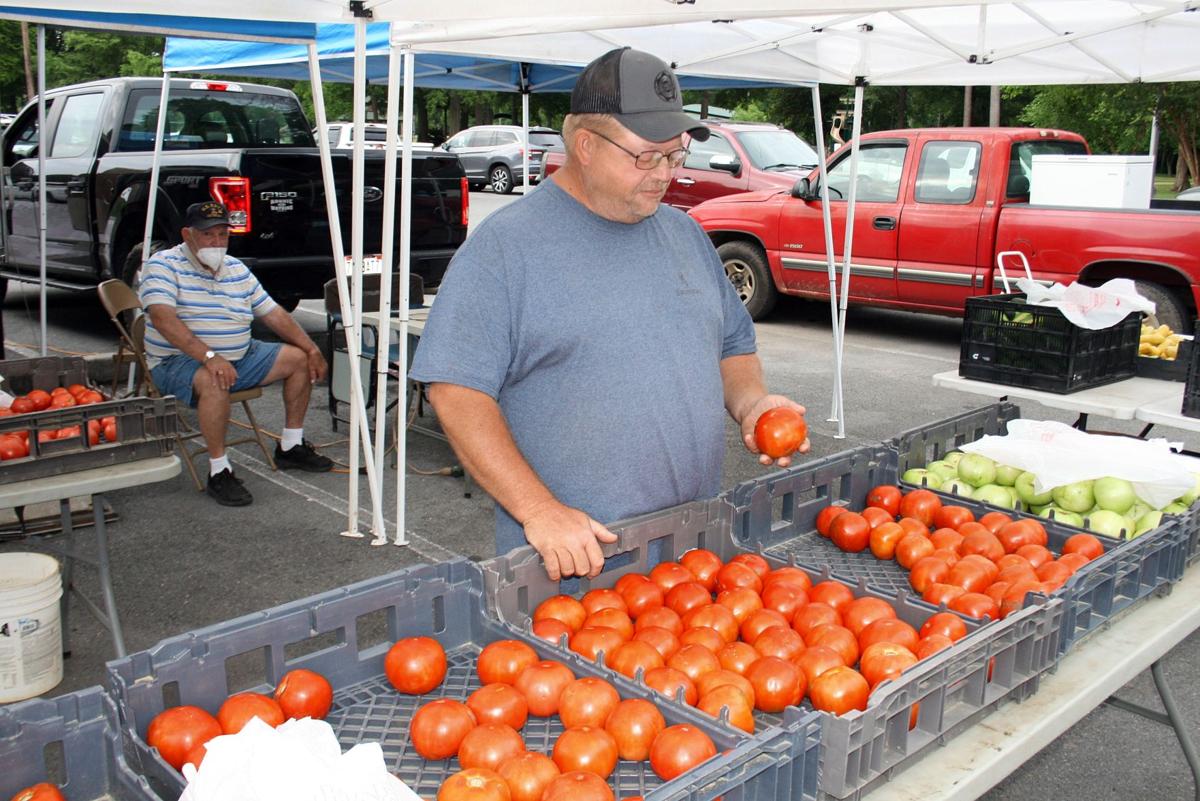 Tony Bone of Lookout Mountain Farm near Leesburg, Alabama, checks out one of his tomatoes at the Ridge Ferry Farmers Market on Wednesday. 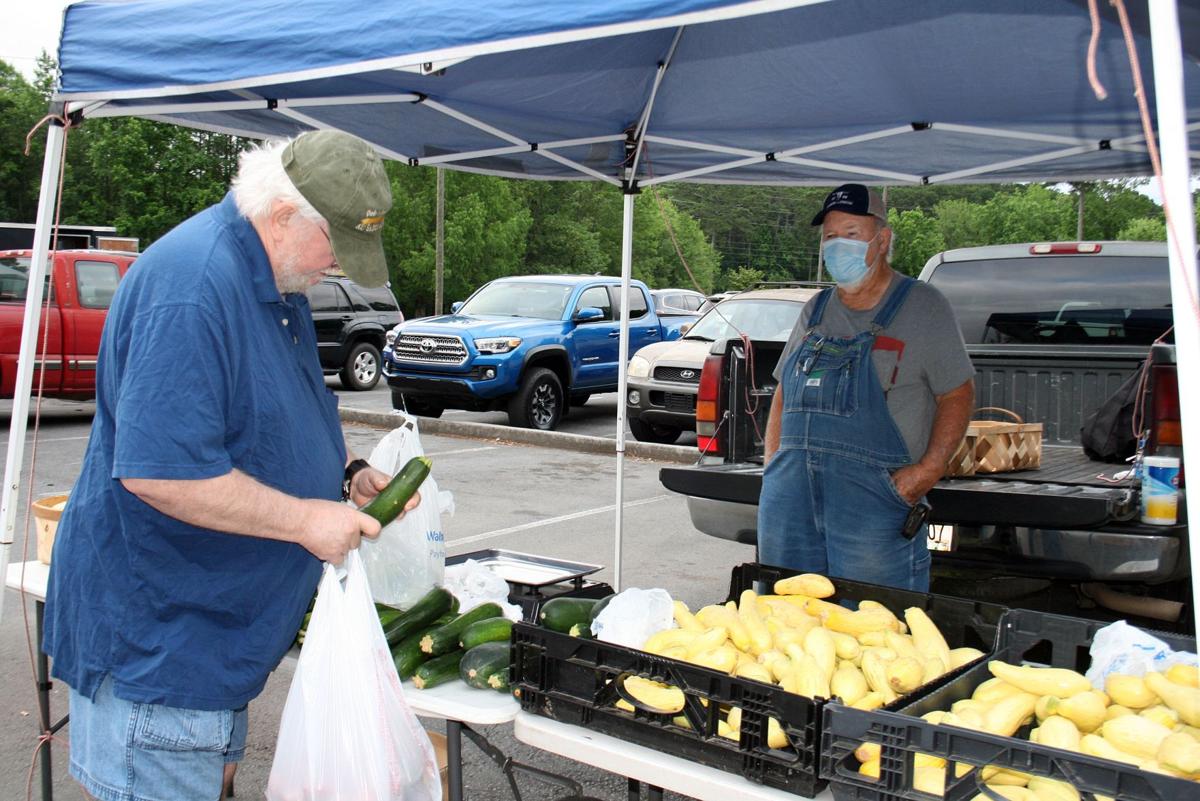 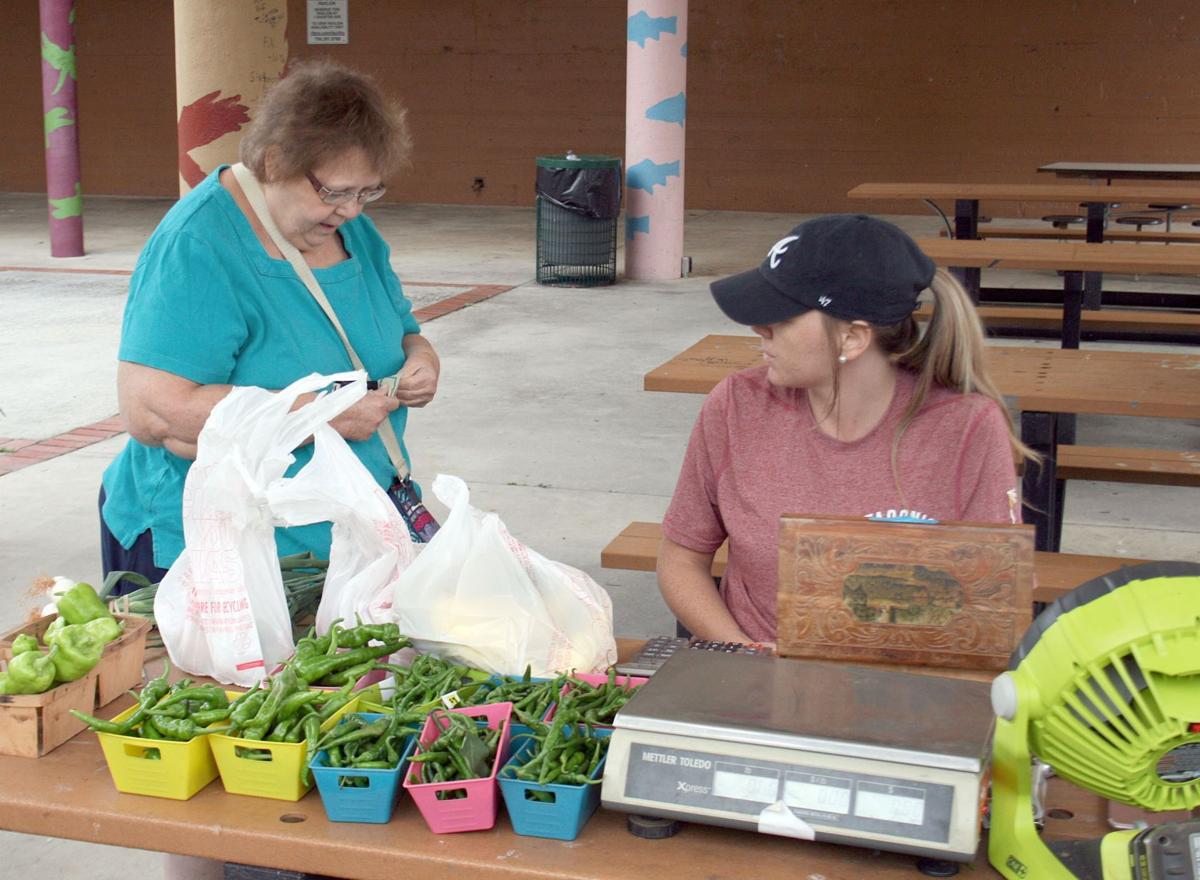 Trudy Barker buys some fresh veggies at the Ridge Ferry Farmers Market from Brittney Hampton with Cook Farm in Lyerly. 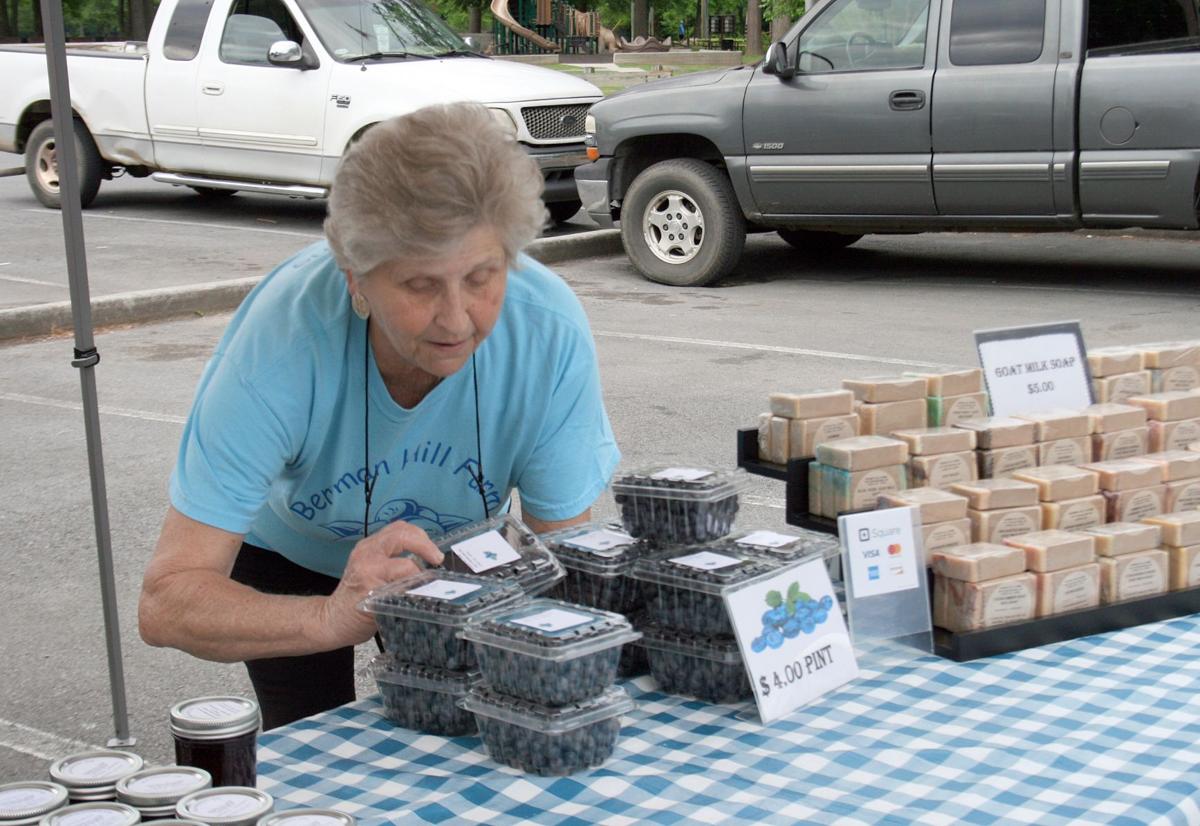 Kathy Berman accidentally pops open a container of her blueberries Saturday during the Ridge Ferry Farmers Market. Folks standing around the tent at the time were able to enjoy free samples! 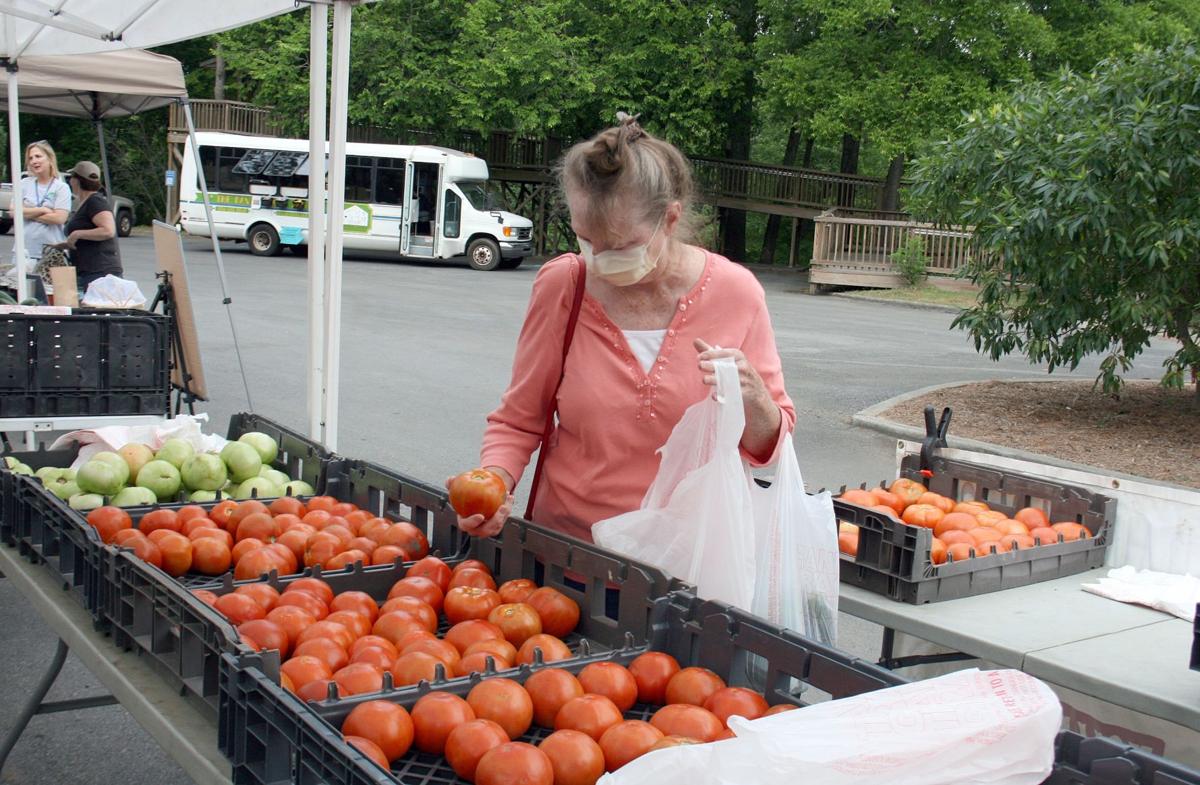 Linda Bryant picks up some fresh tomatoes from Lookout Mountain Farm at the Ridge Ferry Farmers Market on Wednesday. 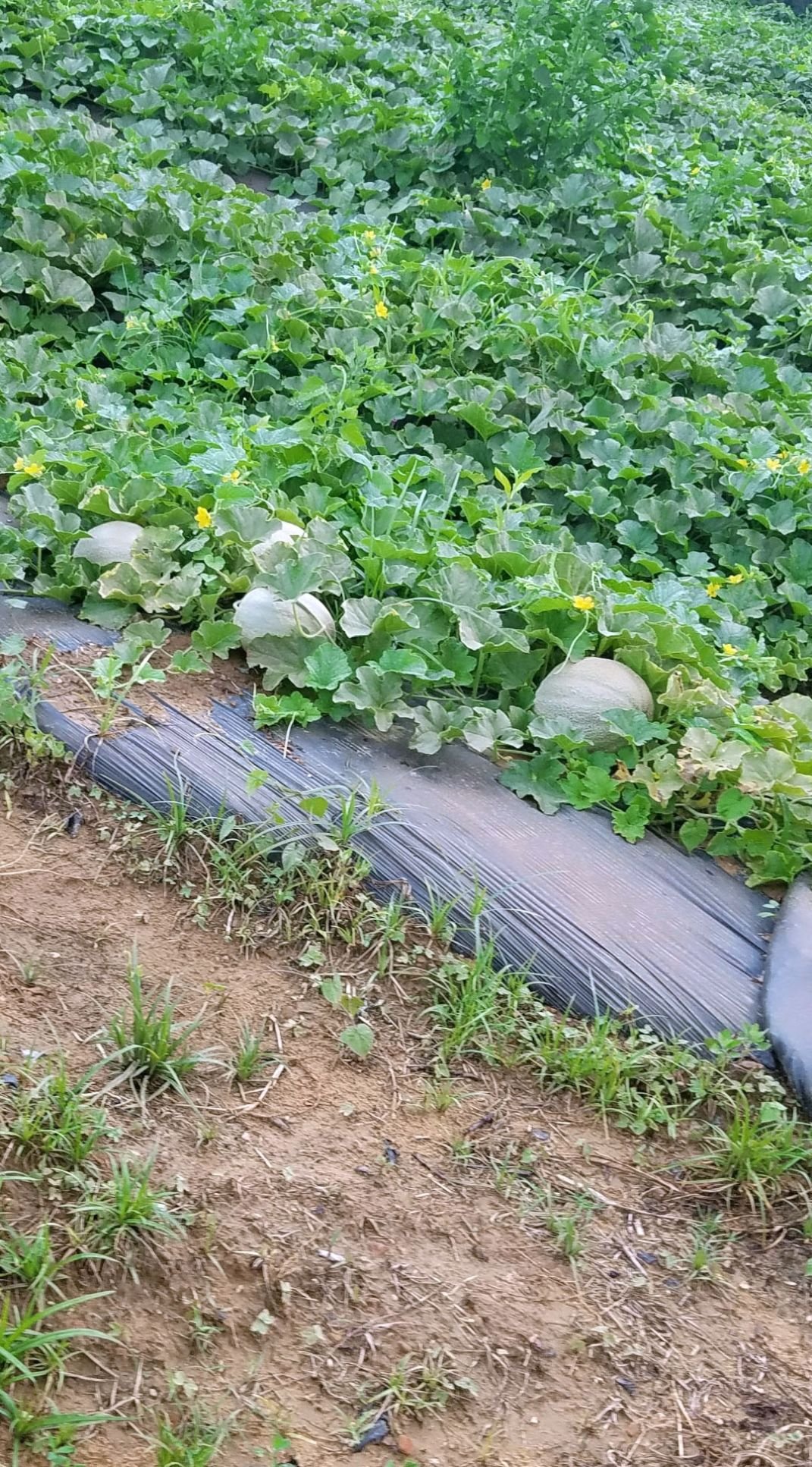 Cantaloupes in the field are starting to ripen at Lookout Mountain Farm near Leesburg, Alabama.

Tony Bone of Lookout Mountain Farm near Leesburg, Alabama, checks out one of his tomatoes at the Ridge Ferry Farmers Market on Wednesday.

Trudy Barker buys some fresh veggies at the Ridge Ferry Farmers Market from Brittney Hampton with Cook Farm in Lyerly.

Kathy Berman accidentally pops open a container of her blueberries Saturday during the Ridge Ferry Farmers Market. Folks standing around the tent at the time were able to enjoy free samples!

Linda Bryant picks up some fresh tomatoes from Lookout Mountain Farm at the Ridge Ferry Farmers Market on Wednesday.

Cantaloupes in the field are starting to ripen at Lookout Mountain Farm near Leesburg, Alabama.

The family farm was long considered to be a backbone of the American way of life. As they’ve steadily given way to mega corporate agribusinesses, families that have managed to hang on to their farms — and keep their next generation interested — are reaching out to connect with customers at small community markets.

The Ridge Ferry Farmers Market, which operates on Wednesday and Saturday mornings from late spring to the fall, is one such place. It draws sellers from around Northwest Georgia and Northeast Alabama, many of whom are from fourth- and fifth-generation farm families.

Tony Bone is a multigenerational farmer with Lookout Mountain Farm outside of Leesburg, Alabama.

“We’re here every Wednesday and Saturday until the last market in October,” said Bone, at his setup last week.

They also do Monday, Tuesday and Thursday markets in Alabama.

The family has 12 people out on the farm at any given time. They plant about 100 acres.

When cantaloupes and watermelons come in, they load up large truckloads for distribution across the region.

A common denominator for all farmers is the weather. Bone said the weather seems to get worse each year, with warmer winters and an ever-increasing number of insects to combat. It affects their traditional growing schedule.

“Normally we used to plant corn the first of March, now you can’t plant it until the middle or last part of March,” he said. “The tomatoes are about two weeks later than usual.”

Donna Hampton serves as the spokeswoman for the Cook Farms in Lyerly. It’s a generational family-run farm that does not hire outside help. The Cook family does it all, from planting to picking and packing.

The business started back in 1976 and farmers markets are pretty much their sole source of income, she said. That translates to a seven-day-a-week job.

“It’s a struggle. We have to work hard,” Hampton said. “It’s hard work putting a good product out there for people to enjoy.”

Several members of the family make the trip to the Rome market twice a week. They’re also regulars at Trade Day in Summerville, selling produce ranging from tomatoes, cabbage and corn to potatoes, beets and zucchini squash. Hampton said that tomatoes are usually the big seller, particularly early on in the season.

“People come all the way from Atlanta for the tomatoes,” Hampton said.

The Saturday market in Rome, she said, is usually the best sale of the week for Cook Farm.

Trudy Barker didn’t drive anywhere near that far to get to the Ridge Ferry Farmers Market on Wednesday, but she said fresh, local produce is a big draw for her.

“I love the tomatoes, but I’m not growing them,” Barker said.

Shoppers seem to love all of the different varieties of fresh red and green tomatoes, but Bone said managing the tomatoes is the toughest part of the operation. Lookout Mountain Farm has hundreds of plants, but dealing with the weather and insects are things they have to stay on top of.

Harvey Henson has been farming for close to 50 years. His farm is east of Calhoun and he makes the trip to Rome twice a week with tomatoes, squash, cucumbers, green beans, okra and zucchini.

He only plants somewhere in the neighborhood of 2 acres and said that even that small of an operation is a lot of hard work. He starts when the winter breaks — but these days, it’s always different.

“This May was one of the coldest in history,” Henson said. “Two big freezes just knocked everything back.”

In addition to Wednesdays and Saturdays in Rome, Henson carries his fresh veggies to a market in Calhoun on Monday and Thursday each week.

“They get hungry for every bit of it,” Henson said.

Mark and Kathy Berman operate Berman Hill Farm in Lyerly. They have horses, cattle, pigs and chickens along with blueberries, pecans and eggs — and goat milk soap. In addition to the Rome market twice a week, they participate in a farmers market at Mentone. The couple also brings a lot of jams and jellies.

While he still does some construction business, the farm and markets effort is pretty much a full-time job in itself. And, like each of the other farmers, he said working with the weather is unquestionably the biggest challenge.

“This year has been different because it went from warm to cold and warm again. It’s not been a normal spring and summer,” Mark Berman said. “It doesn’t really impact sales as much as it impacts the fruits and vegetables.”

Shopper Gregg Lewis of Rome said one of the main reasons he comes out to the market is that, in the back of his mind, he knows he’s helping support a small family farm operation in the region.

“And the fresh produce,” Lewis said. “You get the best vegetables around. I don’t know that it tastes any better (than from a grocery store), but you get it fresh picked and it seems to last longer.”

Rome produce lovers are fortunate to have several markets they can visit, including the Between the Rivers Farmers Market each Saturday at Bridgepoint Plaza and the market at the Rome Welcome Center on Jackson Hill each Friday morning.