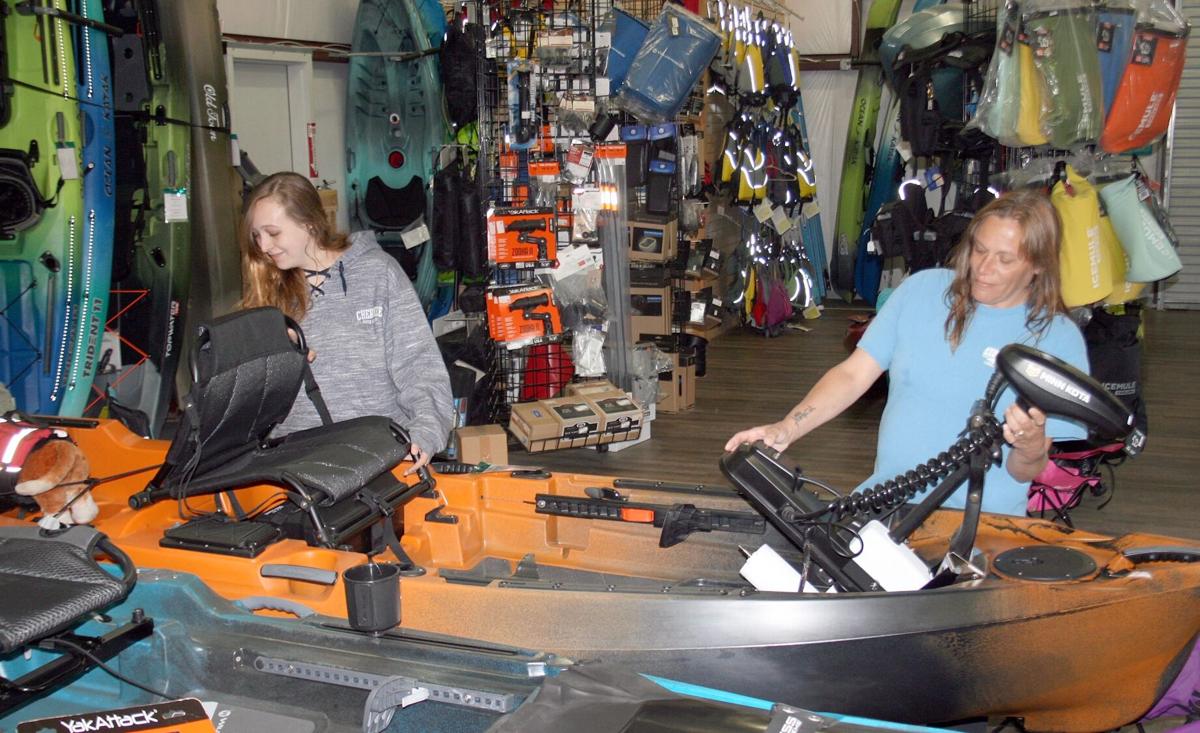 Shelby Pike (left) and Christi Pike check out some of the fishing gear on one of the kayaks at the Cedar Creek RV and Outdoor Center near Cave Spring. 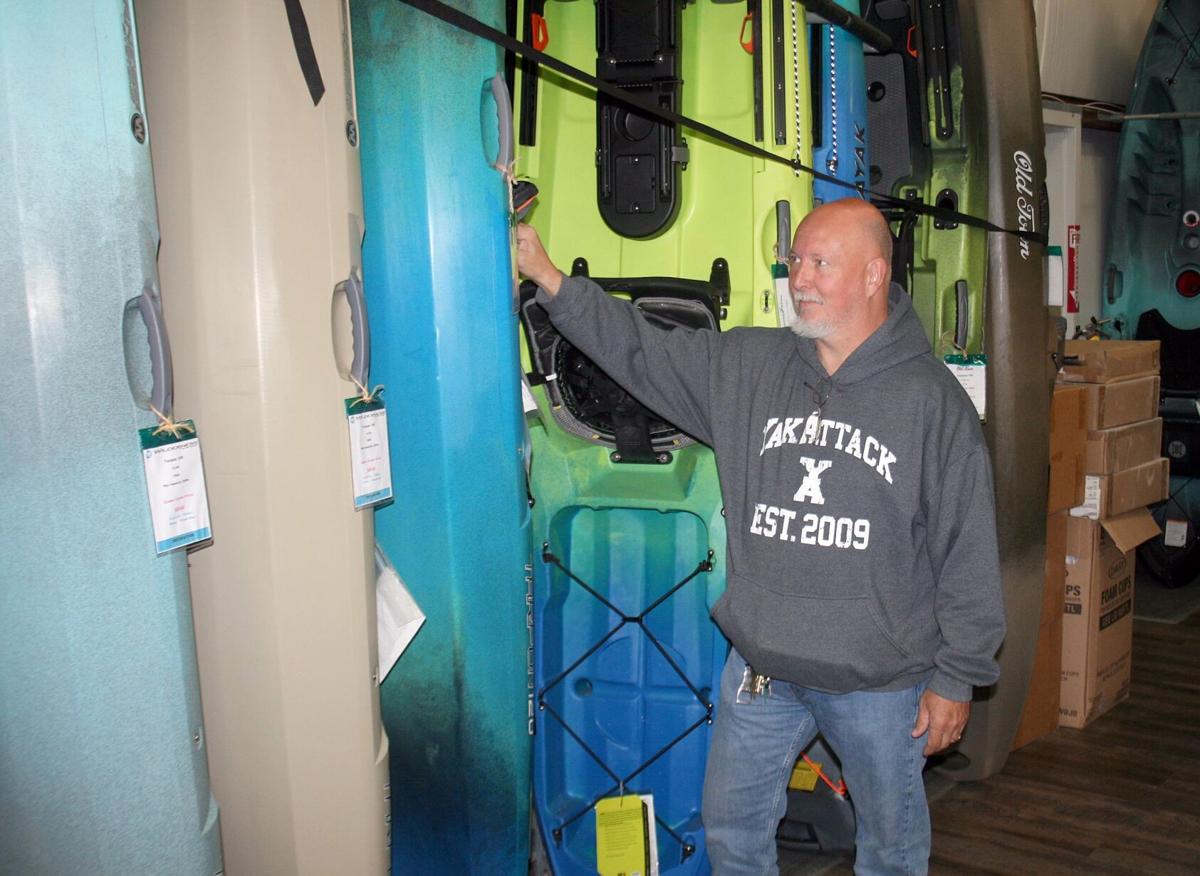 Cedar Creek RV and Outdoor Center owner John Pike looks over some of his kayaks. 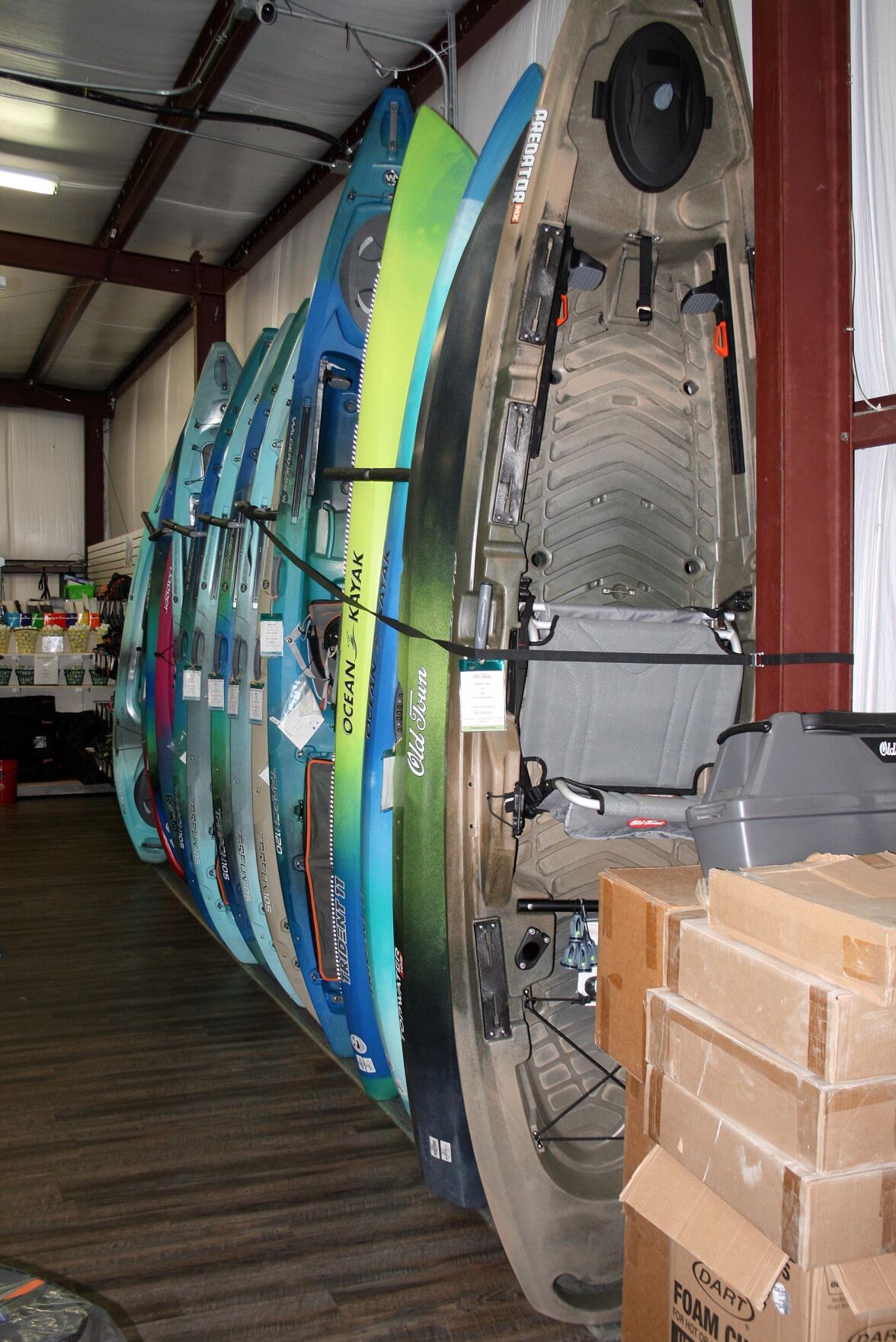 Kayaks have been outselling canoes by far lately at the Cedar Creek RV and Outdoor Center. 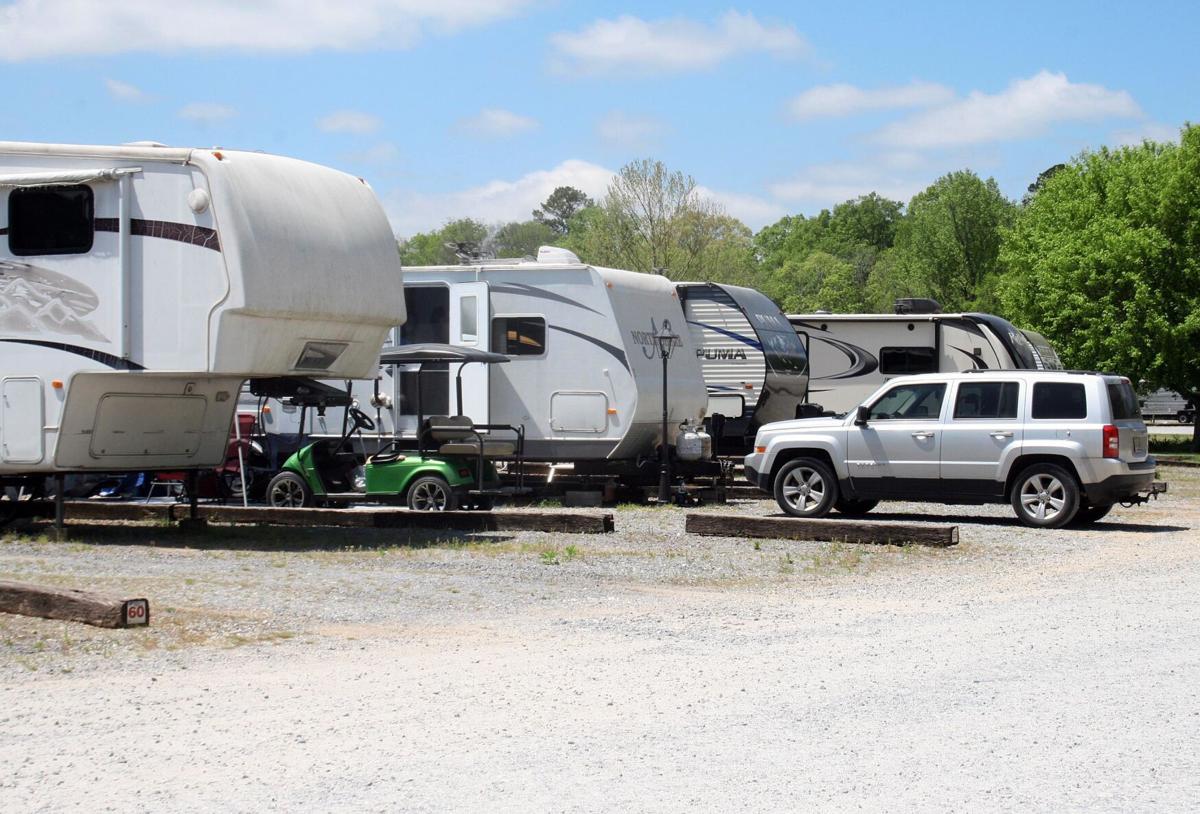 The 62-unit RV Park at Cedar Creek RV Park and Outdoor Center stays full much of he time.

Shelby Pike (left) and Christi Pike check out some of the fishing gear on one of the kayaks at the Cedar Creek RV and Outdoor Center near Cave Spring.

Cedar Creek RV and Outdoor Center owner John Pike looks over some of his kayaks.

Kayaks have been outselling canoes by far lately at the Cedar Creek RV and Outdoor Center.

The 62-unit RV Park at Cedar Creek RV Park and Outdoor Center stays full much of he time.

John and Christi Pike spent years as nearly full-time RV campers and the opportunity to acquire an RV park a couple of years ago was just too good to pass up.

The Pike family bought Cedar Creek RV and Outdoor Center in 2019 from James and Debbie Lossick for a little over $1 million.

The park has been a fixture on Ga. 53 near Cave Spring for decades. Lately, the popularity of canoeing and kayaking has sent business at the retail shop to an all new level, which is a large reason why the Pikes, as Camp and Paddle Inc., purchased the business.

There’s a large camping and recreational vehicle area with 62 full hookup spaces, a rental camper lodge, 24 tent camping sites and a group tent site, all within a very short walk to Cedar Creek.

The retail shop, in addition to carrying a full line of RV parts, typically stocks a large inventory of canoes and kayaks, as well as all of the related accessories. Paddlers can even demo a canoe or kayak with a four-hour paddle on the creek to see what the right craft is for them.

Shelby Pike, daughter of John and Christi, said that kayaks are significantly outselling canoes nowadays. The store carries kayaks made by Perception, Wilderness and Old Town.

Some kayakers prefer a sit-in variety, while others prefer the sit-on-top models. In addition to sales, Cedar Creek Outdoor Center also offers rentals for people who would like to enjoy the water a time or two before making the commitment to purchase a watercraft.

Shelby said that the sit-on-top kayaks, which are conducive to fishing, have been very popular in recent years.

For people who have their own canoe or kayak, the company provides shuttle service to a put-in location south of Cave Spring off Padlock Mountain Road at Lyons Bridge. Folks can paddle back to the Outdoor Center.

Shelby said that, depending on the water level, it’s about a three-hour paddle back to the outdoor center.

“We’re usually pretty booked up on shuttles all summer,” Shelby said. “We’re just getting ramped up (for the season).”

Christi said the COVID-19 pandemic did cause some issues. Instead of lading up their 15-passenger van with several different groups, they had to limit the shuttle transports to a maximum of five people at a time.

“We have to sanitize the van and wipe it down between trips. It’s been crazy, but it’s been working,” she said.

People also can launch at the outdoor center and paddle to a take out point at the Ga. 100 bridge just north of Cave Spring, or float all the way to Brushy Branch near the Alabama state line and take out at Montgomery Landing.

Big Cedar Creek is billed as a perfect float for the beginner, intermediate or even highly skilled paddler. The creek has plenty of ripples but none of the Class IV or V rapids that might quicken the heart of even the most experienced.

Jesse Demonbreun-Chapman, executive director of the Coosa River Basin Initiative, said the type of paddle is very dependent on the water level.

John Pike said that he sold so many kayaks last year that he is still waiting on some orders to be filled.

Kayak manufacturers “are not taking any orders right now because they are so overwhelmed,” he said. “They’re still waiting on parts from overseas, I think.”

Sandra Lindsey, the retired downtown development director in Cave Spring, said the small shops and restaurants reap the benefits of folks who come to the park for a weekend, or several weeks at a time.

John said that if he had 60 more RV spaces he could have easily filled them this past winter, because there is so much construction going on in the region.

The campground stays pretty full, Shelby said, adding that a lot of campers are contract workers and it is not unusual for them to be there for months at a time.

Christi said they even have one RV owner who has lived in the park since 1997.

Weekend visitors come into town to enjoy the iconic cave and antique shops as well as the small retailers and restaurants.

“We do have a bunch on weekends and stay full booked, especially in the summer,” Shelby said. “We’re pretty much booked up for the next three weekends.”

The park covers five parcels of property on the south side of Cedar Creek. A 7.7-acre tract fronting Ga. 53 is home to the retail shop and canoe/kayak launch. Another parcel, directly behind the shop, is approximately 8.5 acres and houses the bulk of the RV park.

Three other parcels sit on the southwest side of the shop and encompass approximately 11 acres. A large golf driving range is spread across them.

Some of the property has even been used for weddings in the past. It’s not something they promote heavily, Christi said, but she really enjoys having a role in it. The couple also is planning to add a children’s playground and dog park to the grounds. The playground will be installed as soon as the equipment arrives, which could be any day now.

John said he expects to have a completely new website for the center online very soon.

Almonty Announces the Filing of Its Audited Annual Consolidated Financial Statements, MD&A and AIF for the Year Ended December 31, 2020

Passing on your password? Streaming services are past it