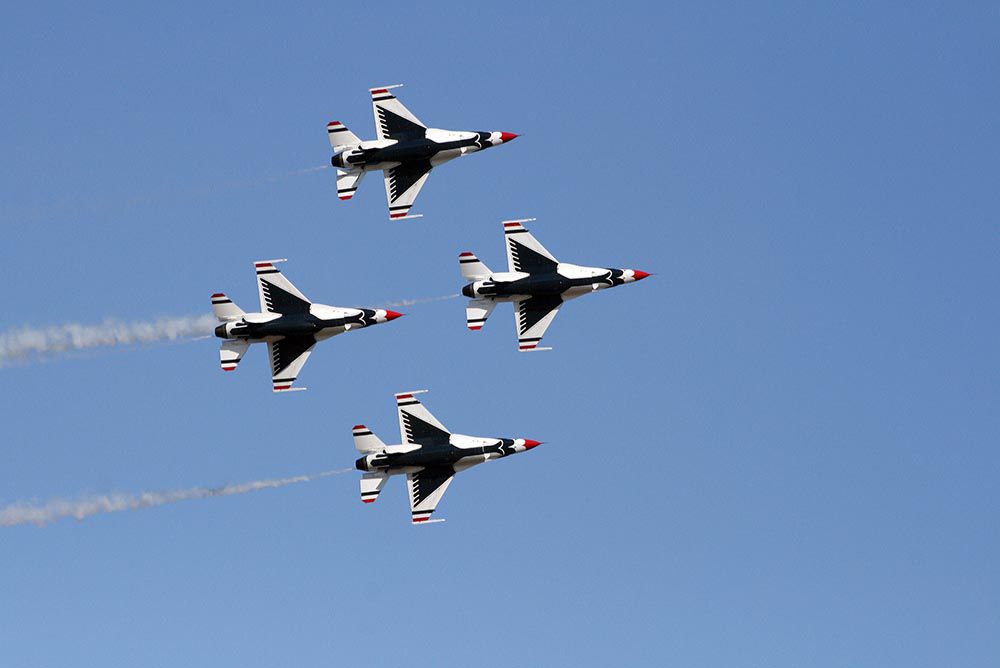 The U.S. Air Force Thunderbirds in their iconic diamond formation zoom past the huge crowd at Richard B. Russell Regional Airport during the Wings Over North Georgia air show in this file photo from 2016. 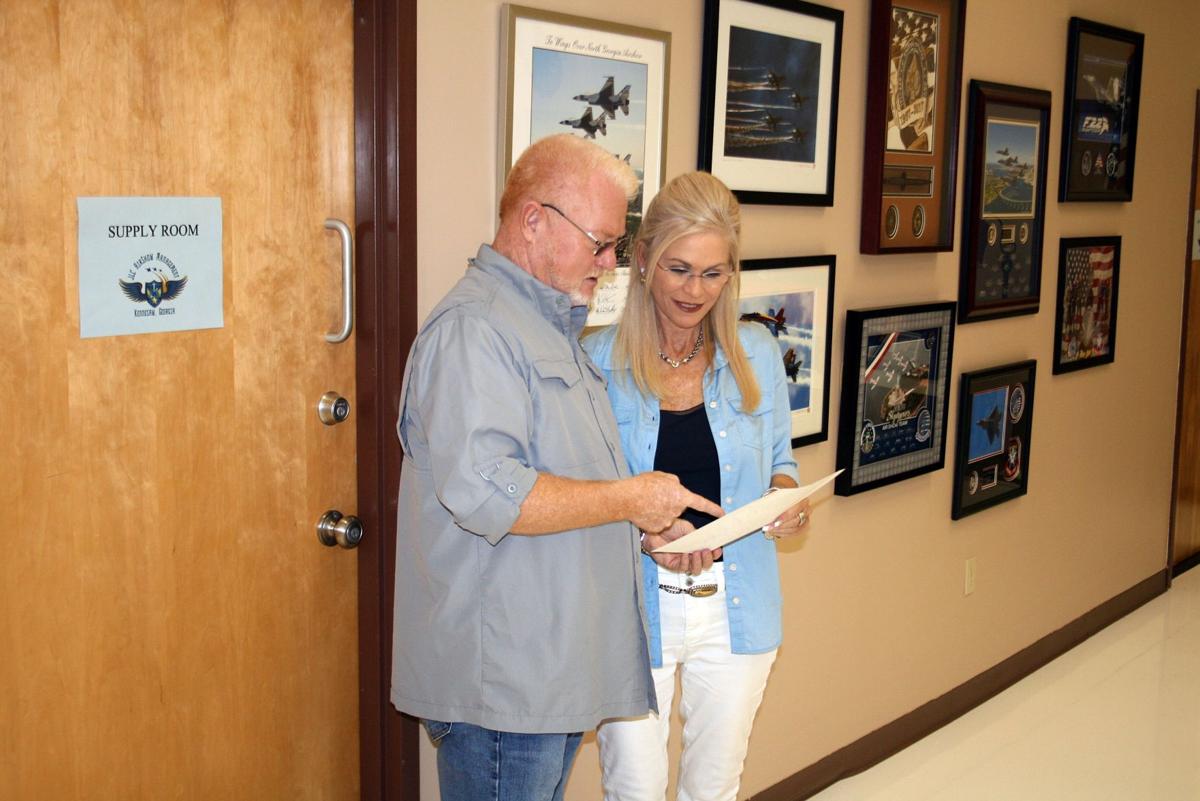 CEO John Cowman (left) and his chief of staff Tina Talton go over some numbers related to the Wings Over North Georgia air show at their corporate offices on the grounds of Richard B. Russell Regional Airport in Rome. 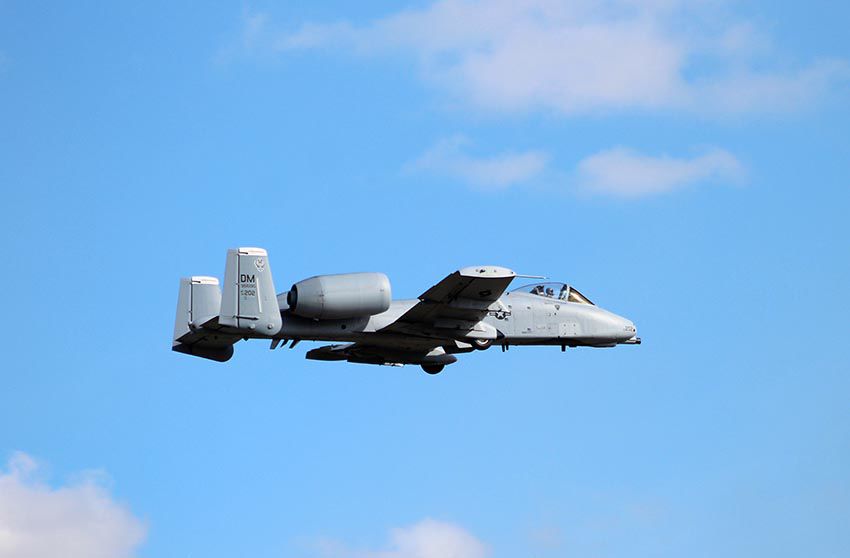 An Air Force A-10 Thunderbolt Warthog makes a pass during the 2018 Wings Over North Georgia air show. 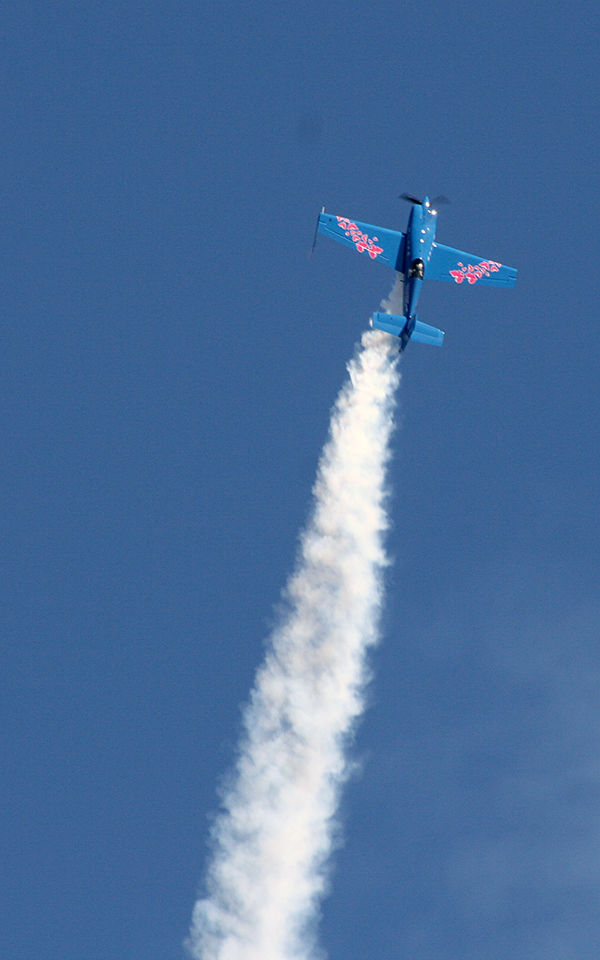 Aerobatic champion Patty Wagstaff lets the smoke pour from her aircraft during a rehearsal for the 2018 Wings Over North Georgia air show. Wagstaff is among the civilian pilots expected to participate in the 2020 show in October.

The U.S. Air Force Thunderbirds in their iconic diamond formation zoom past the huge crowd at Richard B. Russell Regional Airport during the Wings Over North Georgia air show in this file photo from 2016.

CEO John Cowman (left) and his chief of staff Tina Talton go over some numbers related to the Wings Over North Georgia air show at their corporate offices on the grounds of Richard B. Russell Regional Airport in Rome.

An Air Force A-10 Thunderbolt Warthog makes a pass during the 2018 Wings Over North Georgia air show.

Aerobatic champion Patty Wagstaff lets the smoke pour from her aircraft during a rehearsal for the 2018 Wings Over North Georgia air show. Wagstaff is among the civilian pilots expected to participate in the 2020 show in October.

John Cowman really needs to catch a break for his Wings Over North Georgia air show planned for Oct. 24-25.

After having to cancel last fall, the CEO of JLC Air Show Management said this year’s event needs to happen to help the company sustain its investment in the community. The U.S. Air Force Thunderbirds are highlighting the upcoming show and Cowman is spending a lot of time planning how to pull it off while the COVID-19 pandemic is still an issue.

“The business side of this business is substantial,” Cowman said.

If there is one place in Rome that a crowd can socially distance and still be a big crowd, it might be the sprawling grounds of Richard B. Russell Regional Airport and Admiral John Henry Towers Field.

“First of all, we are on target to do an air show in October,” Cowman said. “But we are at the mercy of the government. That starts with the CDC, all the way down to Floyd County and every person in between.”

At this stage, Cowman said the Thunderbirds and other performers are still thanking him for not canceling the show this far in advance.

He said the good part about the Wings Over North Georgia show is that the event is not in an enclosed arena.

“We’re on a big piece of property here that would allow for lots of separation,” he said. “We’ve still got four months of time between now and the show and this thing could get better or it could get worse. We don’t know what we don’t know. If we are allowed to have a show, we’re going to take every precaution necessary so that our fan base and public is protected.”

Ann Hortman with Rome’s Office of Tourism said the event is one where people don’t have to be right on the front row to see all of the action.

“You can really spread out at the airport,” Hortman said.

She said that, since the first show in 2012, the event has become a “unique signature event for Rome.”

In addition to the Thunderbirds, the October show is also slated to feature the U.S. Army Golden Knights parachute team.

The Ladies for Liberty singers will also be performing at the show again this year.

All of those performers come at an expense to Cowman and his team at JLC Air Show Management.

The military teams like the U.S. Air Force Thunderbirds and the Navy Blue Angels are paid what amounts to an appearance fee. Cowman said that fee essentially covers the cost of getting those teams to Rome.

Keep in mind he’s not talking about six pilots. The military teams have a support unit that could be as many as 80 people. They do cover their own fuel costs, which Cowman said would be prohibitive for him to pay.

That’s one reason he’s looking forward to a major runway extension project that’s still in the planning stage today. Right now, the Thunderbirds — and other high speed single aircraft units like the Raptor and F-35 — cannot land locally. Instead, they fly out of Dobbins Air Reserve Base in Marietta.

The Blue Angels, on the other hand, can land at the Floyd County airport, and they make local fuel purchases for their practice and performance flights. That typically adds up to tens of thousands of dollars in sales for the airport.

Most of the other teams are based locally as well.

“All civilian performers, and there are tons of them, we pay a fee, hotel rooms, rental cars, smoke oil and their fuel,” Cowman said.

That adds up to the point that — while the air show takes place on just one weekend a year — JLC Air Show Management is still one of the airport’s top fuel customers every year.

Also, it’s not unusual for the company to book as many as three or four entire hotels for several days leading up to the air show.

Cowman said the military demonstration teams typically bring next year’s team members with them, to get experience at unfamiliar airfields.

“They love this because of the challenges of it — with the hills and mountains giving them experience before they become team members the next year,” he said. “We’re in a very unique, cool position to be in.”

Still, the fees paid to performers generally include a nonrefundable deposit, whether the show is canceled by the weather or coronavirus.

The 2020 show is also offering folks with recreational vehicles the opportunity for an infield camping experience, which is available for purchase in advance only. Aviation fans can arrive at the airport as early as noon Thursday, get set up, and watch the arrival of the teams. Plus they can see the air show performers practice on Friday for the Saturday and Sunday shows.

The air show has had significant economic impact across the community over the years.

Kathy Mathis in Rome’s Office of Tourism said that a hurricane-shortened event in 2015 still generated more than $2.7 million to the local economy. In 2016, the show was estimated to have contributed $4.4 million to the community. In 2017, the figure was $6.2 million and in 2018 the impact was estimated at $3.6 million.

Cowman is hoping that by Aug. 24, 60 days out from the show, the government will provide guidance as to whether or not it will be possible to move forward. Plans for dealing with COVID-19 could potentially result in a limit on the crowd — but that at this point there is no way of knowing if that will be necessary.

“Ultimately the CDC, the governor and county health department will work with us to help come up with a plan we’re going to stick to at that time,” Cowman said. “Right now, we’re on target.”

In the event federal, state or military leadership pulls the plug on the show due to COVID-19, all advance ticket purchases will be honored for the 2021 Wings Over North Georgia air show.

The 2021 air show is scheduled for Oct 30-31 featuring performances by the U.S. Navy Blue Angels. The event will mark the 75th anniversary of the Blue Angels team and the first season that the unit will be performing in new Super Hornet aircraft.

Cowman is also working with county officials to gain approval for another event that could have a huge economic impact on the airport and community in general.

Performers from all over the country — military demonstration teams to individual aerobatic pilots — would come to Rome for a four-day training event to hone some of their skills for the coming season, just as major league baseball teams do in Florida and Arizona each year.

“We’re getting a lot of traction within the industry for this,” Cowman said.

The event could bring 100-plus teams to the community and be a boon for local hotels, restaurants and fuel sales at the airport.