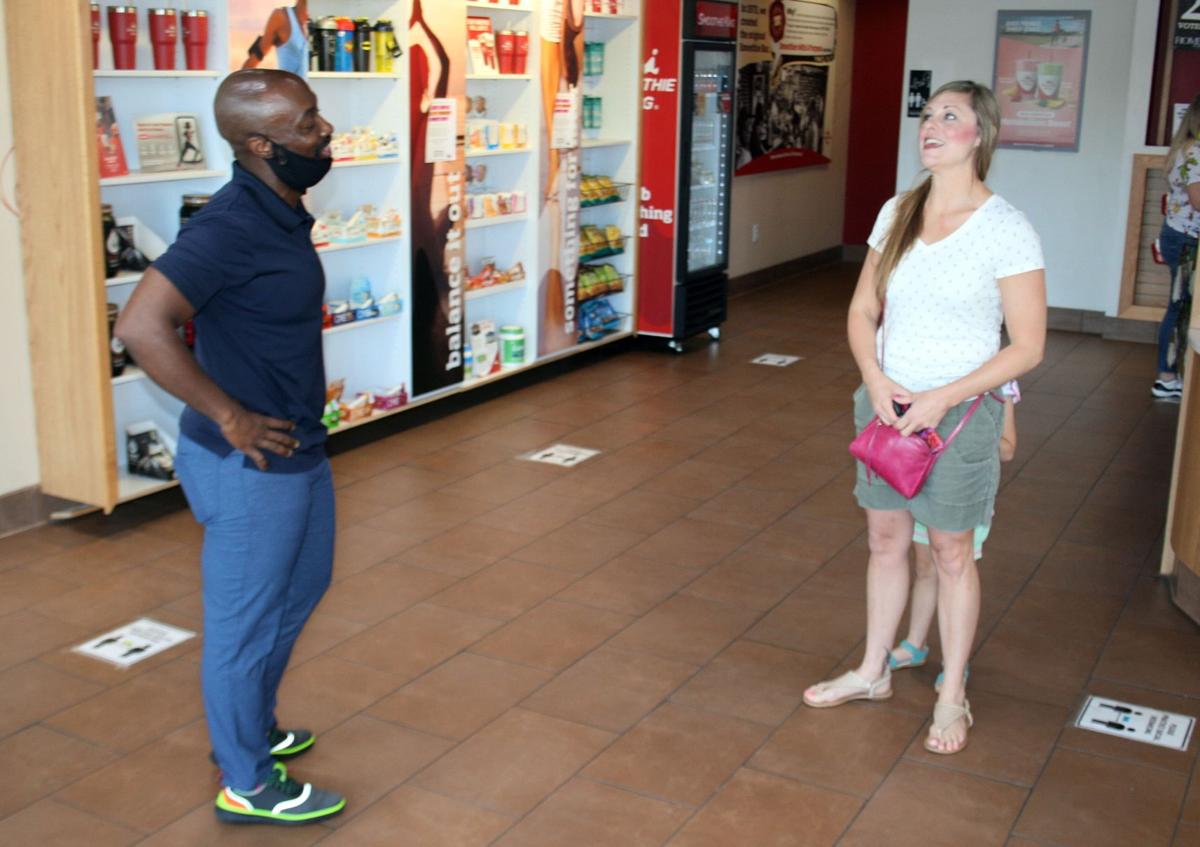 Jarrod Johnson socially distances himself during a conversation with Sarah Bradfield at his Smoothie King shop on Turner McCall Boulevard. 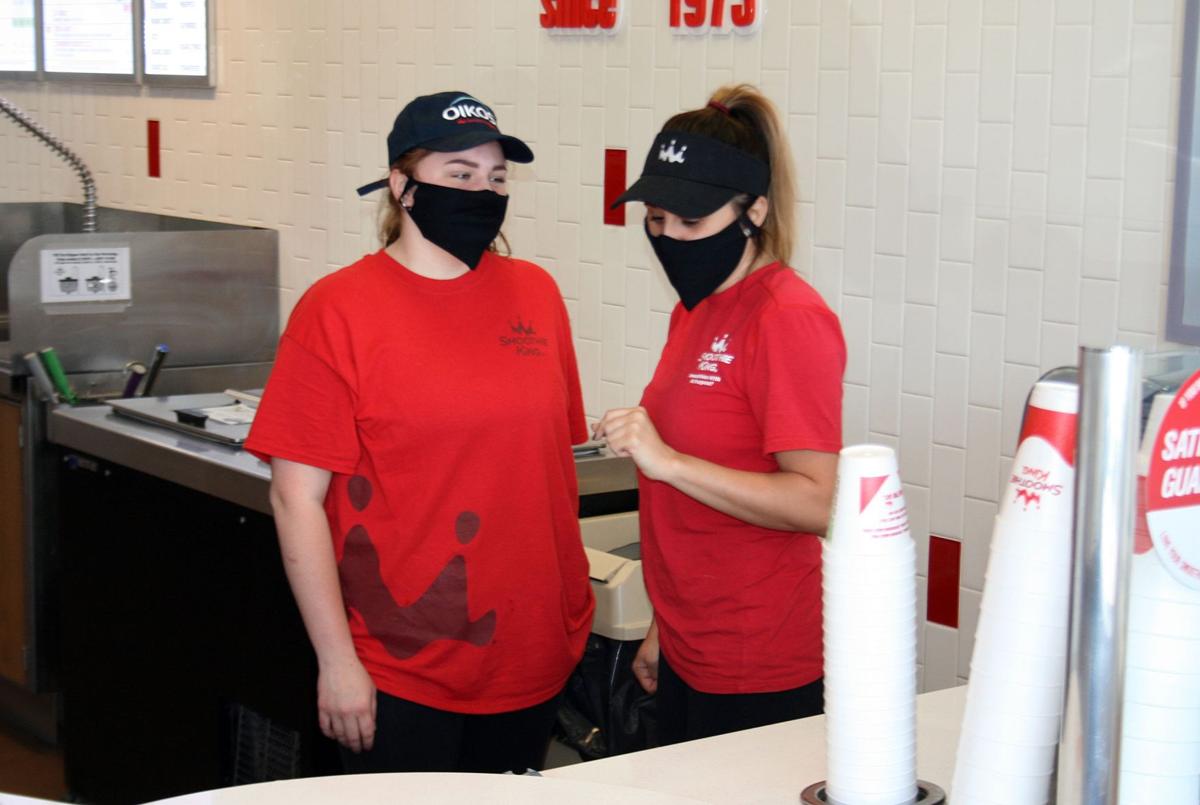 Brianne Carver (left) gets some tips from Smoothie King Manager Ambrosia Johnston in the shop earlier this week. 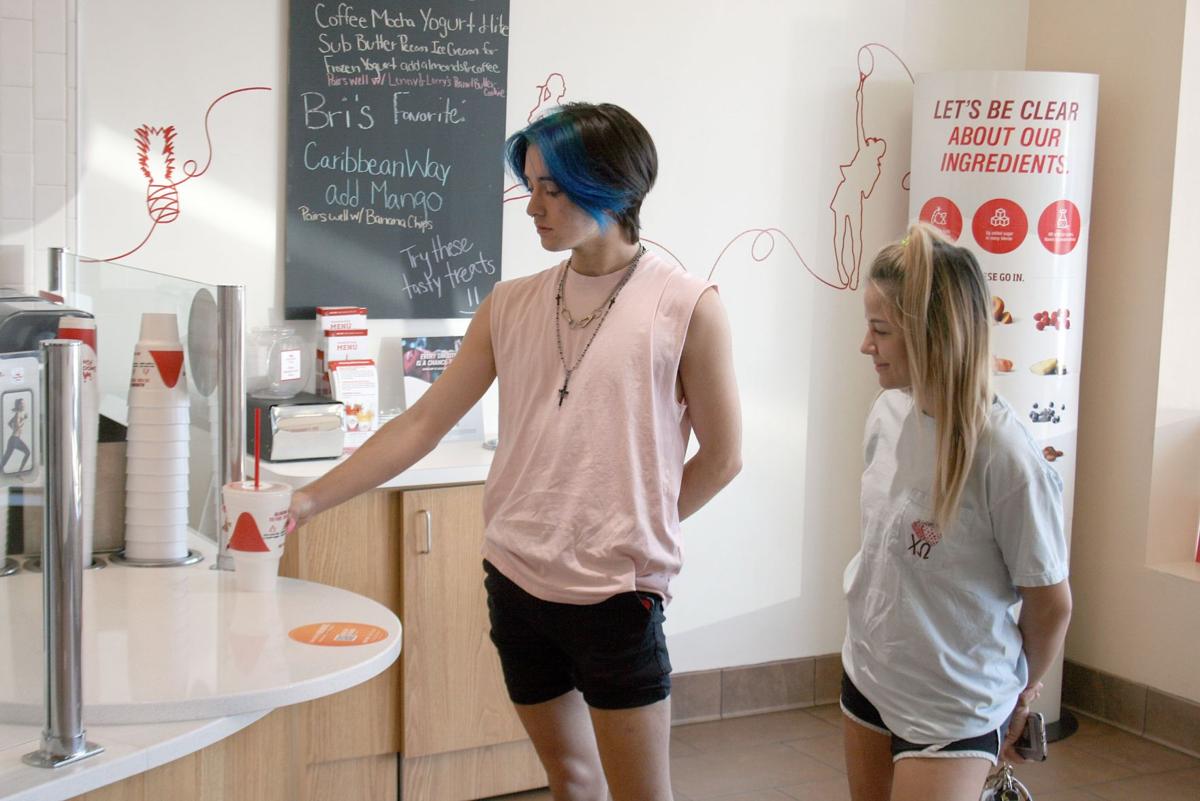 Jarrod Johnson socially distances himself during a conversation with Sarah Bradfield at his Smoothie King shop on Turner McCall Boulevard.

Brianne Carver (left) gets some tips from Smoothie King Manager Ambrosia Johnston in the shop earlier this week.

It didn’t take Rome entrepreneur Jarrod “J.J.” Johnson long to become completely involved in all things Rome. What did take him some time was finding the right spot to locate his Smoothie King business.

He signed the franchise agreement with Smoothie King in 2014 and at one point thought he was going to put the store in Cartersville because he was having a hard time finding the right place in Rome. But he ended up settling in at 832 Turner McCall Blvd.

Johnson and his wife, Dr. Bridgette Dingle, a neonatologist at Floyd Medical Center, moved to Rome from Texas in 2013.

His background was in law enforcement, but when the couple made the decision to relocate to Northwest Georgia, Johnson decided he didn’t want to go through all the issues associated with moving his law enforcement credentials from one state to another.

“I said if I have to start all over at something, let’s try something new to start over with,” he said.

He thought it might be both fun and challenging to own and operate his own business. He just happens to hold a master’s degree in Business Administration from Texas Southern University.

Smoothie King turned out to be the perfect fit because it was a product line both he and his wife were familiar with. Not only was the smoothie something Johnson knew about, but he and his wife were also sold on the idea of helping folks develop a healthier and fitter lifestyle.

“We both try to work out and stay fit,” Johnson said. “When I opened this I was big in CrossFit and it was like, ‘Where can I go and get a protein smoothie after the workout?’ and there wasn’t a place.”

Since he opened the business three and a half years ago, he sees more people coming into the store in workout clothes and a little sweaty.

During the last two months of the COVID-19 pandemic, Smoothie King was giving away immune support ingredients in smoothies if they were purchased through the Smoothie King app. Those ingredients include Vitamins C and E, zinc, selenium, ginger and aloe vera.

When Johnson is not at his shop, chances are pretty good he’s either at a meeting at the Rome Floyd Chamber, helping mentor youth in Rome City Schools or at the Boys & Girls Club — either on his own or through his service with the 100 Black Men of Rome and Northwest Georgia.

He said Rome has given him a lot of opportunities to speak with youth.

“A lot of young people are uninformed about a lot of things,” Johnson said. “I’m just giving them information that many people didn’t give me and I had to learn on my own. Sometimes young people will listen to people who are not close to them more so than they will someone who is close to them.”

Johnson doesn’t consider his staff as just a bunch of young people at work. He also invests a lot of time in them. Right now, Smoothie King has 11 employees in addition to Johnson.

He understands the young people will not work with him forever.

One of them, Chris Pelico, has been with him since the day the shop opened. Johnson said Pelico is graduating from Georgia Highlands College.

“I’m so proud of him but he’s getting ready to move on to other things. He texted me the other day and said he needed to talk with me and I knew what was coming,” Johnson said.

The Rome Floyd Chamber was his own conduit into the local business community.

“I was trying to get a local banana supplier and people were looking at me like, I don’t know you,” he said.

He didn’t have much background with a chamber since his career had been in law enforcement, not business.

Johnson is a graduate of Leadership Rome and a member of the Leadership Georgia 2020 class.

“When he walks into a room he just puts everybody at ease,” said chamber President Jeanne Krueger. “He’s a leader and the experience he brings to the table is hugely valuable. He lifts us all up.”

Since he opened in 2016, Johnson has been a frequent contributor to charitable causes across the community. He is a regular participant in the annual Salvation Army Can-a-Thon and has donated a portion of his profits during specific campaigns to help raise money for the Community Kitchen on North Broad Street.

His Smoothie King has been able to navigate the COVID-19 public health crisis with minimal disruption to the business. Johnson took all of the tables out of the store and put down markers on the floor to help keep his customers at least 6 feet apart.

“We’re really focused on getting people in and out,” Johnson said. “For the most part, people who don’t know each other are really keeping their distance.”

That’s just another aspect to a healthy lifestyle nowadays.