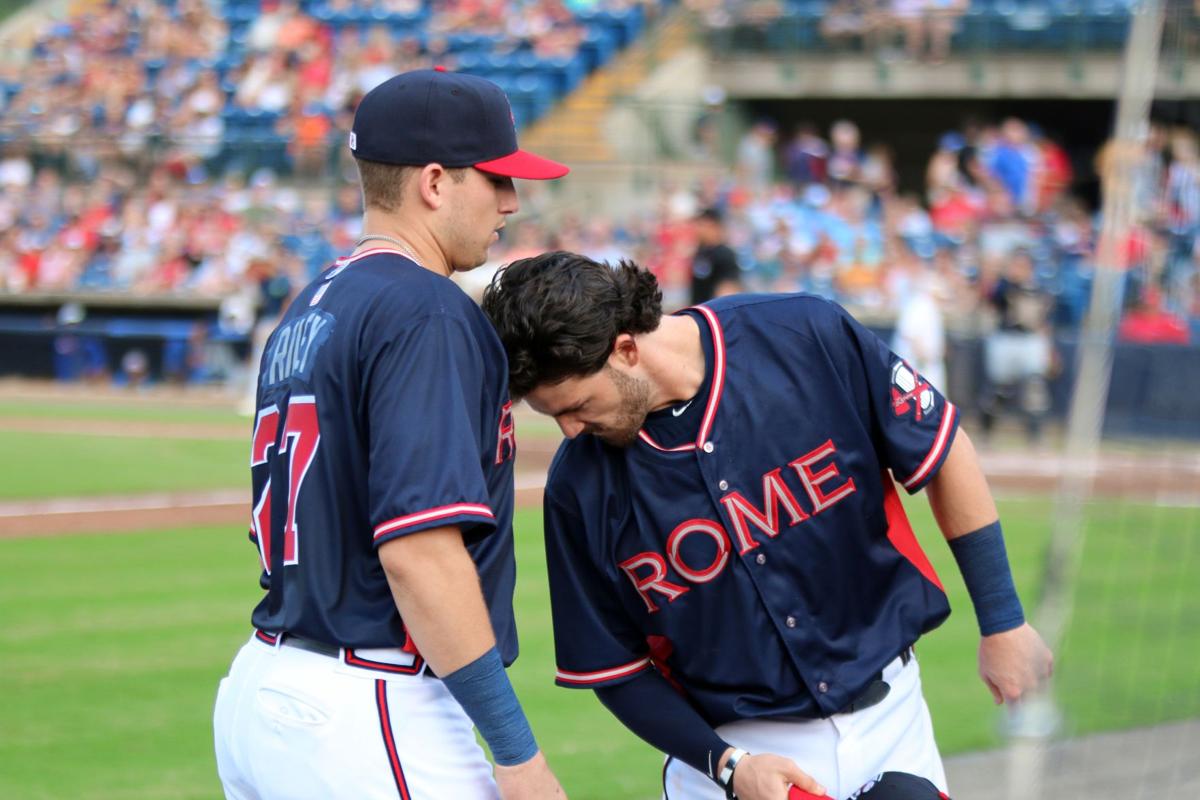 Braves shortstop Dansby Swanson (right) puts his head into the chest of teammate Austin Riley as they head into the dugout after the top of the fourth inning of the Rome Braves’ game against Columbia on Saturday at State Mutual Stadium. The two Atlanta players were with the Class A team on rehab assignments. 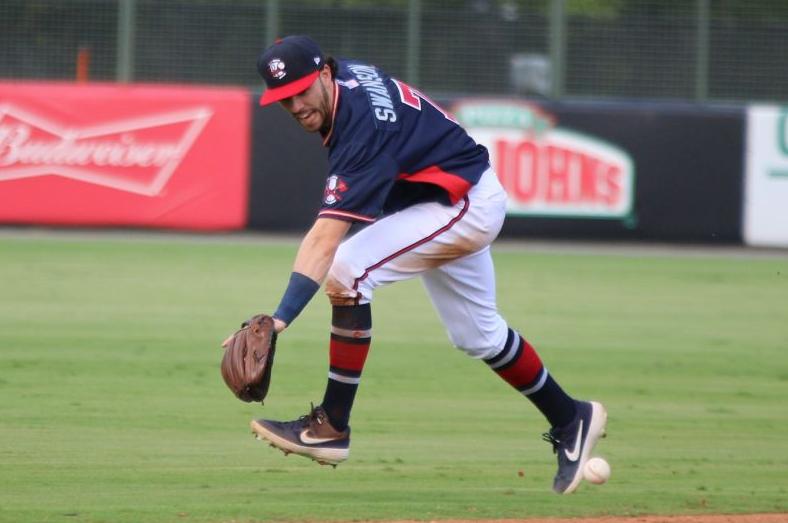 Braves shortstop Dansby Swanson chases a fast grounder through the infield Saturday during the Rome Braves’ game against Columbia at State Mutual Stadium. 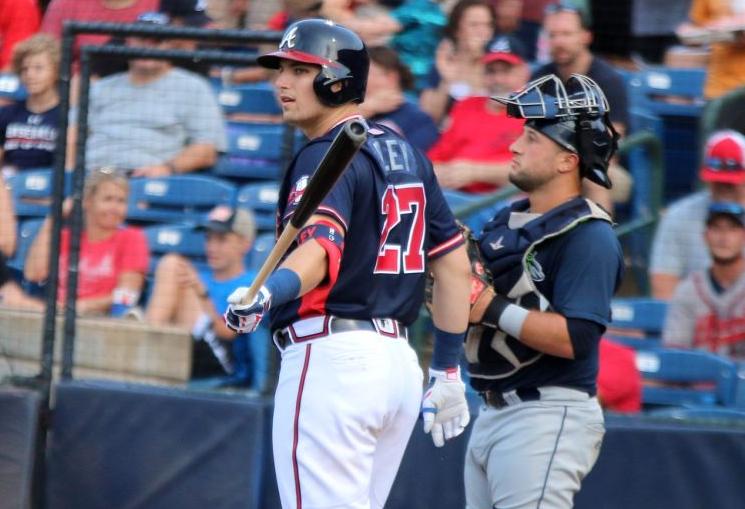 Braves outfielder Austin Riley takes a warmup swing as he steps into the batter’s box during the fifth inning of Saturday’s Rome Braves game against Columbia.

Braves shortstop Dansby Swanson (right) puts his head into the chest of teammate Austin Riley as they head into the dugout after the top of the fourth inning of the Rome Braves’ game against Columbia on Saturday at State Mutual Stadium. The two Atlanta players were with the Class A team on rehab assignments.

Braves shortstop Dansby Swanson chases a fast grounder through the infield Saturday during the Rome Braves’ game against Columbia at State Mutual Stadium.

Braves outfielder Austin Riley takes a warmup swing as he steps into the batter’s box during the fifth inning of Saturday’s Rome Braves game against Columbia.

State Mutual Stadium has seen its share of big leaguers through the years, but it’s not every day that two MLB players are in town at the same time.

That’s what Rome Braves fans got to see for a couple of days with Atlanta Braves’ players Dansby Swanson and Austin Riley taking part in rehab stints with the team.

Swanson joined the Braves’ Class A affiliate on Thursday and completed his assignment Saturday with Rome’s 4-3 win over the Columbia Fireflies, while Riley, who arrived in Rome on Friday, will stay on for the team’s Sunday game.

Swanson, who had been out of action since bruising his right heel during a July 23 loss to the Royals, said it just felt good to get back out on the field after conditioning himself to get back into playing shape.

“Just being able to get back and play, it was great,” Swanson said. “I didn’t have any issues. I was able to play three games, so it was a success for sure.”

The shortstop, who has 57 RBIs and 17 home runs for Atlanta this season, said he’s feeling better after the injury and hopes to be back with Atlanta soon. He said he plans to leave Sunday to join the team for their makeup game against the Colorado Rockies in Denver on Monday.

“It’s doing pretty good,” Swanson said about his injured foot. “At the end of most days, just being on your feet in general makes everybody sore, but my ability to bounce back has been good, and that’s definitely paid dividends for me.”

After going 0-4 in his first game with Rome on Friday, Riley started Saturday’s contest with two straight groundouts before ripping a single over the head of Columbia pitcher Colin Holderman in the bottom of the fifth inning. The hit was relief to the outfielder, who has 17 home runs and 45 RBIs on the season.

“The swing is slowly starting to come back,” Riley said. “The biggest thing in coming back from an injury is getting that timing down, getting that comfort in the box. To get that last hit, that was good as far as confidence.”

Riley, who has suffered from a right knee sprain since Aug. 8, will complete his time with Rome on Sunday when the Braves finish their series against the Fireflies at 2 p.m. at State Mutual Stadium.

Riley said he only expects to improve and expects to play with the Braves AAA team in Gwinnett on Monday for the first contest of the Stripers’ four-game series against Norfolk.

“You can go from playing every day and being comfortable to being out five, six, seven days and you feel like you’ve lost it,” Riley said. “To kind of get that confidence back in day two, that feels really good. I still have five, six, seven days of rehab, but I feel like it’s only going to get better. The swing and everything else is just going to continue to improve.”

Justin Dean led off the inning with a single, moved to third on a single by Bryce Ball and scored on a wild pitch by Holderman. After a single by Shea Langeliers, Michael Harris doubled to left field to plate two runs.

Harris scored the go-ahead run on a single by Brenden Venters.

Rome will head out for a four-game road series in Greensboro, North Carolina, beginning Monday before returning to State Mutual Stadium Friday for the final series of the regular season.

U.S. Sen. David Perdue and challenger Jon Ossoff sniped at each other in an hourlong debate Wednesday night less than a week before the Nov. 3 election that echoed attacks the pair have lobbed at each other for months in television and social-media ads.

What if a state can't agree which presidential candidate won?

Imagine this scenario: It's been weeks since Election Day, and in one state, it's not clear which presidential candidate won. In an initial count, the Democrat won by roughly 100 votes. Then an audit found a counting error that put the Republican ahead. Officials launch a recount, but it's not finished by the December deadline for the Electoral College to cast votes. So the state's Democratic ...

UPDATE: Polk County, most of North Georgia under wind advisory until 4 a.m.

Storm effects lead to closure of schools on Friday