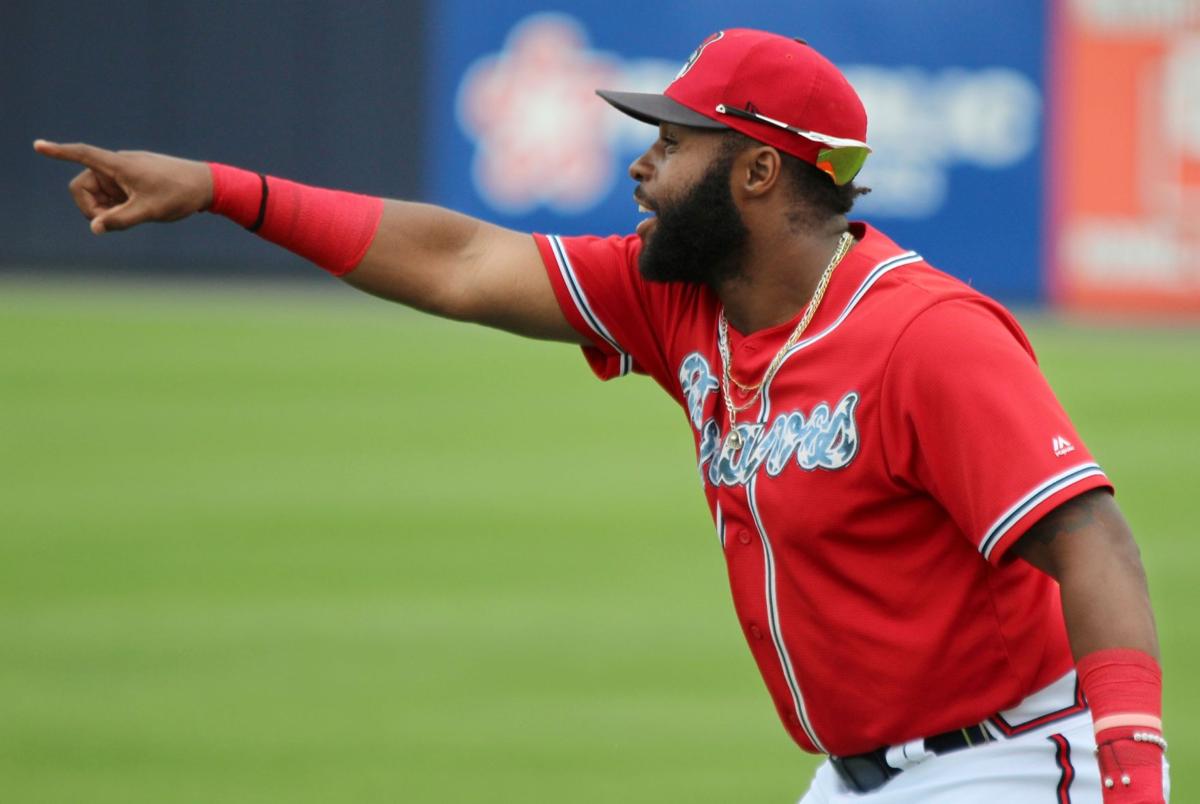 Rome Braves’ Trey Harris points out his teammates after making a throw to second base for an out during the Braves’ game against Greenville on Wednesday at State Mutual Stadium. The Powder Springs native is flourishing with the team in his second season in the minors. 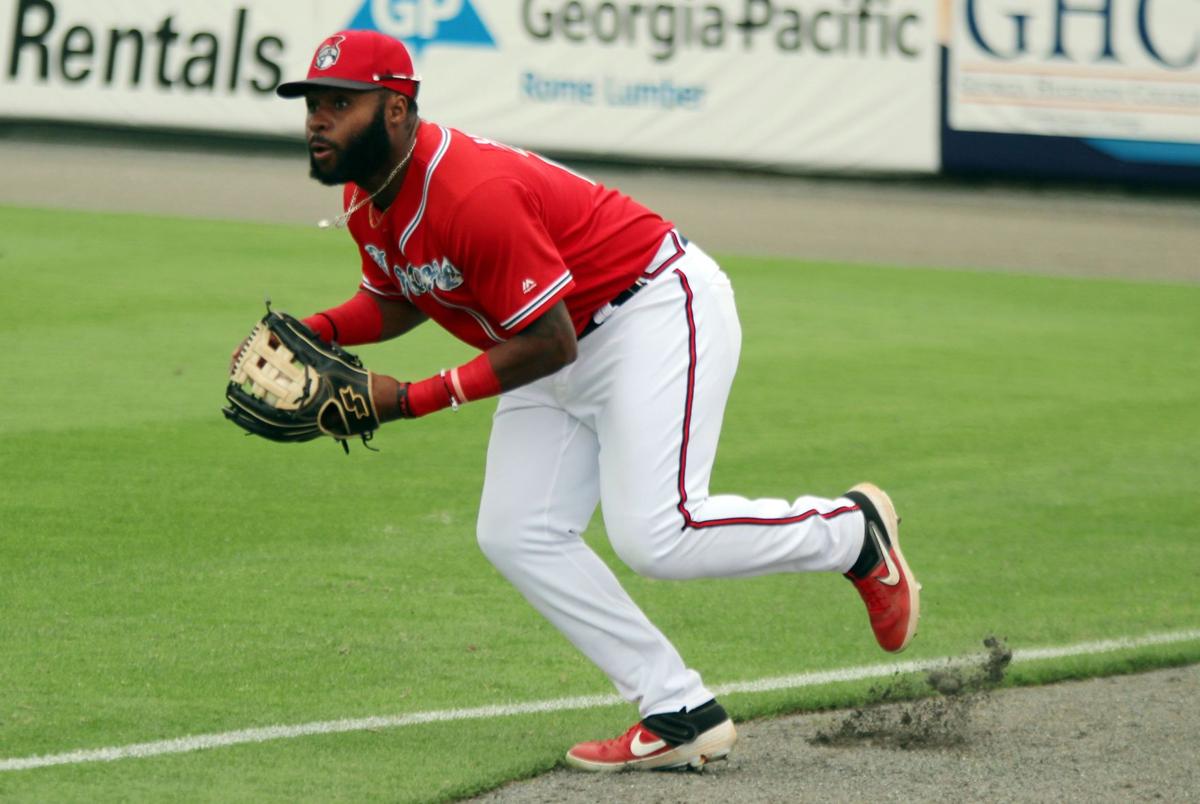 Rome Braves outfielder Trey Harris looks up for the throw after fielding a grounder in right field during the Braves’ game against Greenville on Wednesday at State Mutual Stadium.

Rome Braves’ Trey Harris points out his teammates after making a throw to second base for an out during the Braves’ game against Greenville on Wednesday at State Mutual Stadium. The Powder Springs native is flourishing with the team in his second season in the minors.

Rome Braves outfielder Trey Harris looks up for the throw after fielding a grounder in right field during the Braves’ game against Greenville on Wednesday at State Mutual Stadium.

Consistency is the solid foundation upon which many professional baseball careers have been built. Trey Harris is the first to admit it took some time and some trial and error for him to find it.

With the first month of his first full season in the minor leagues in the books, the Rome Braves outfielder is putting his hard work on display on a daily basis and proving to be one of the top hitters on the team and in the South Atlantic League.

“I think at every level I’ve played at I’ve had a moment where I’ve kind of sat back and gave an at-bat away,” Harris said Thursday after Rome’s game against Greenville. “And that’s the difference from .370 and .300. I don’t want that to happen. I want to soak up all the at-bats, lock it in and get ready to go.”

A native of Powder Springs, Harris was on the opening day roster for the Class A affiliate of the Atlanta Braves and has been the team’s everyday right fielder.

The former McEachern High School standout had a hit or walk in 19 straight games and has failed to get on base in only two games this season as of Friday.

Harris said the early-season surge in his performance at the plate is a result of the goals he set for himself in the offseason and the work he put in to ensure he could make an impact when he got back on the field in the spring.

“Sometimes you can’t always work on the weaknesses. You just have to make your strengths as strong as they can be,” Harris said. “Hitting is my thing, so this offseason, really from the last game last year, I just tried to grow and hit every day.”

After solid careers at both McEachern and the University of Missouri, Harris was drafted by the Atlanta Braves in the 32nd round of the 2018 MLB Amateur Draft. He spent the rest of the summer playing rookie ball and joined Rome later in the season. When this spring came around he said he tried to make some changes to improve his productivity and performance but they never felt right. So he went back to doing more of what he normally did.

“I think just getting my body in shape this past offseason has helped more than anything. It’s in better shape than it has been. I feel faster. So I’m just kind of believing in myself. This spring I started out real slow and I realized sometimes you’ve just got to be you,” Harris said. “After that it just seemed to kind of roll. I’ve been hitting. I’ve been having fun. And so far so good.”

Rome’s three-game set against Greenville this past week saw Harris prove his prominence both at the plate and in the field.

He sent a line drive to center field with the bases loaded in the fifth inning of Wednesday’s series opener to bring in two runs and tie the game at 3-3. He then made a diving catch with a runner on second base in the ninth to maintain Rome’s 4-3 lead and, ultimately, the win.

The next day, Harris went 3-for-3 against the Drive with a two-run homer in the sixth that gave the Braves a 4-3 lead. He put his arm to work early on, fielding a soft line drive and making the throw to second in time to get the batter out.

Rome manager Matt Tuiasosopo praises Harris’s ability to work through any bad moments he has and bounce back quickly when he’s needed by his teammates.

“He’s a good ball player and a good kid,” Tuiasosopo said. “He’s a college guy, so he’s smart. He knows his body and what he needs to do day in and day out to stay consistent with everything and with his approach. He’s the same guy every day, and that’s a good thing.”

That characteristic is not by chance, Harris said. He had hoped to had been drafted following his junior season at Mizzou but had to wait a year before the Braves came calling, and then it was in one of the later rounds.

“I just think being a late-round pick like I am I have to prove it every day at this level. There were some questions about my game, and I really just want to show them what I can do,” he said. “It makes those days where I don’t want to do anything, it makes it easier to get up and get after it. Because I know my time is limited, whether I want to admit it or not.”

At 23, Harris is one of the older players in the Rome clubhouse, a reality he faces head on by taking a more vocal role among his teammates as both a leader and the one more often than not ready to lighten the mood or provide encouragement.

“I think just by understanding who I am I can make people smile and I want to use it in a great way because this game is so hard,” Harris said. “I mean, I’m playing well, but I fail, what — seventy-something percent of the time? So you’ve just got to stay on your toes and be ready to go. That’s kind of what I’m doing, and I’m trying to do that for the young guys.”

“He brings a lot of energy. Everybody loves Trey and he’s always kind of in the middle of everything,” Tuiasosopo said. “They all get along with each other really well. It’s a lot of fun with a lot of laughter.

“You know, we call him Big Momma.”

Yes, Harris has picked up a nickname among his Rome teammates. He said it originated with the Latin American players who came to call outfielder Justin Dean “Big Poppa.”

“We’re always together,” Harris said of his friendship with the former Lenior-Rhyne standout. “I mean, that’s my right-hand man right now. So they went Big Poppa, Big Momma.”

He admits he was annoyed by it at first but has learned to embrace it.

“There’s some good days and bad days where it gets on my nerves, but it’s definitely something were if they give you a nickname that means they care about you,” Harris said. “That’s the way I look at it, and I’ll take that any day of the week.”

Georgia’s new voting machines will face their first major test in a June 9 primary election that has created far different logistical challenges for state officials than were anticipated before the coronavirus pandemic struck.

Young voters surpass old in Floyd County, but will they turn out?

Floyd County’s voter pool continues to skew younger, with more than half of those registered under the age of 50.

Lt. Gov. Geoff Duncan signaled Friday he plans to work with state lawmakers on passing hate-crimes legislation following the high-profile arrests of three white men in the fatal shooting of a black man near Brunswick.

Protests force Target, CVS and Walmart to close some stores

US cities clean up, prepare for another night of unrest

DC mayor: We have to be concerned about virus rebound

Protests hammer US cities struggling to recover after lockdown

‘We’re sick of it’: Anger over police killings shatters US

'Back in the game': SpaceX ship blasts off with 2 astronauts