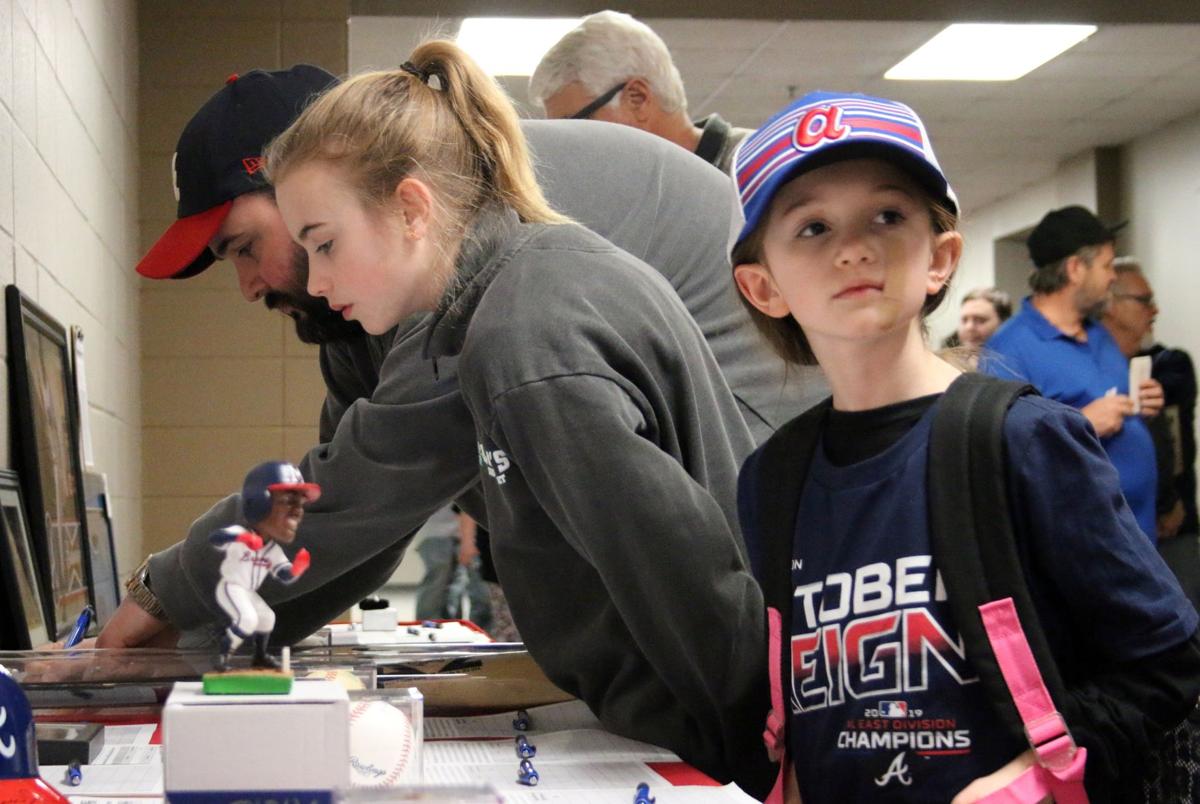 Madison Price (from right) looks up from silent auction items while her sister, Hannah Price, and father, Matthew Price, get a closer look during the Rome Braves’ annual Hot Stove Gathering at the Forum River Center on Monday. 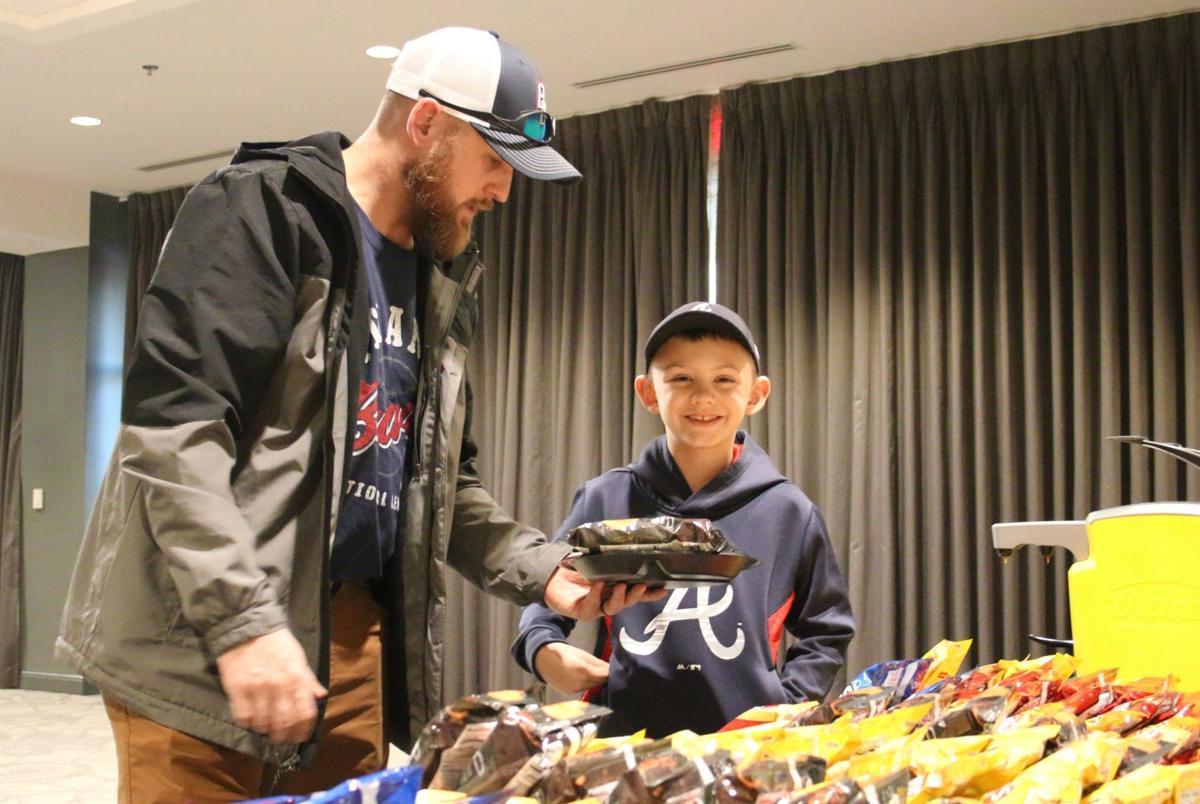 Jackson Watson (right) smiles as his dad, Josh Watson, hands him his plate with hot dogs and chips during the Rome Braves’ annual Hot Stove Gathering on Monday night at the Forum River Center. 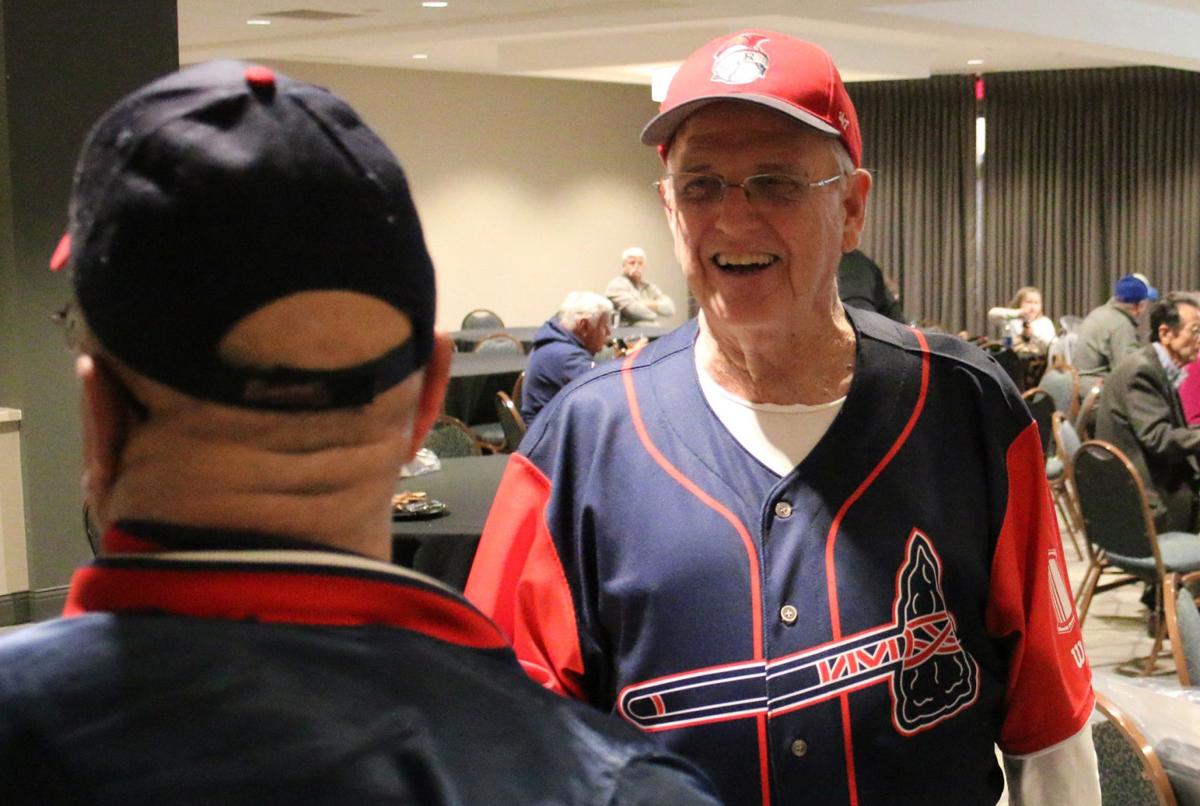 Rome Braves season ticket holder Scottie Edwards shares a laugh with some of the other guests at the team's Hot Stove Gathering on Monday at the Forum River Center.

Madison Price (from right) looks up from silent auction items while her sister, Hannah Price, and father, Matthew Price, get a closer look during the Rome Braves’ annual Hot Stove Gathering at the Forum River Center on Monday.

Jackson Watson (right) smiles as his dad, Josh Watson, hands him his plate with hot dogs and chips during the Rome Braves’ annual Hot Stove Gathering on Monday night at the Forum River Center.

Rome Braves season ticket holder Scottie Edwards shares a laugh with some of the other guests at the team's Hot Stove Gathering on Monday at the Forum River Center.

Whether a die-hard Braves fanatic, a collector, or someone who just enjoys the game of baseball, Atlanta and Rome Braves fans of all kinds got a chance to unofficially kick off the 2020 baseball season this week.

The event also featured a silent auction featuring Braves’ memorabilia and other sports collectibles, and benefited the Armuchee High School baseball program as well as the Atlanta Braves Foundation.

Matthew Price and his daughters, Madison Price and Hannah Price, looked over the items up for auction before the autograph session after coming from Menlo. Matthew Price said Monday’s Hot Stove was the first he had attended in several years, but he always keeps up with what the Rome and Atlanta Braves are doing.

“I’m always anxious to see how some of the draft picks work out,” Price said. “I always like to see how they pan out and root for these guys. Getting to see them when they’re young and developing, it’s always fun to watch. I remember when (Jeff) Francoeur and (Brian) McCann were here. It was pretty awesome. We’ve had some really good players come through here.”

Price said he was excited to see how former Rome players Shea Langeliers, Trey Harris, Christian Pache and Drew Waters will develop this season. His daughter Hannah however, just wants to see one of her favorite players back in Rome.

“I want Trey Harris to come back,” Hannah said.

“We don’t want Trey Harris to come back,” her father explained quickly. “As much as we want him here, we want him to develop and go up.”

Jackelyn and Josh Watson, of Silver Creek, brought their son Jackson to his first Hot Stove this year.

“I like it. I know he’s excited,” Jackelyn Watson said about her son. “He said he was nervous, but he’s excited.”

Jackson plays travel ball and shares a jersey number with one of his favorite players, Charlie Culberson. Jackson and his family try to attend as many Rome Braves games as possible during the season.

“We try to go to quite a few a year,” Josh Watson said. “When his baseball schedule allows.”

Longtime Rome fan Scottie Edwards was in attendance at the Hot Stove and hasn’t missed one since the Braves came to his hometown. Edwards and his wife, Carol, both have birthdays in April and will celebrate on opening day at State Mutual Stadium, April 9.

Scottie Edwards is known to bring bubble gum and candy to the stadium for the kids in attendance, and plans to travel to wherever the Braves go if they make it to the South Atlantic League championship series this season.

“I’ve always had tickets, and I like baseball,” Edwards said. “I’m looking to win. We’ll be there. We’re retired, so we don’t care.”

Snitker got to see Atlanta Braves’ fans get excited about the upcoming season this past Saturday when Truist Park hosted this year’s Chop Fest, the annual Braves fan fest.

“It’s gaining momentum and strength, and it’s amazing all the people that come out,” Snitker said at a press conference prior to the start of Monday’s event. “It’s a huge event and you can witness that by the turnout. The players, they enjoy interacting with the fans.

“I tell people you don’t realize how big Braves Nation is and how far it goes. There are people that are very, very passionate about their Braves baseball.”

Spring training begins for the Braves next month in Florida, with Atlanta opening the season March 26 on the road against the Arizona Diamondbacks. Their home opener will be April 3 against the Miami Marlins. The Rome Braves open the season at State Mutual Stadium on April 9 against the Hagerstown Suns.

ATLANTA — Deciding whether to rename buildings or academic colleges on the 26 University System of Georgia campuses will be a complicated process fraught with emotion, system Chancellor Steve Wrigley warned Thursday.

Atlanta Mayor Keisha Lance Bottoms signaled Wednesday she will place Georgia’s capital city under a mandatory mask order amid the COVID-19 pandemic, joining Athens and Savannah on a list of Georgia cities where masking is now required.

Roughly 60 new poll worker applications have been processed for the August runoff election. Voters and poll workers alike had voiced the need for more help at precincts during the last Floyd County Board of Elections meeting.

Arrest records from the Saturday, July 11, edition of the Calhoun Times