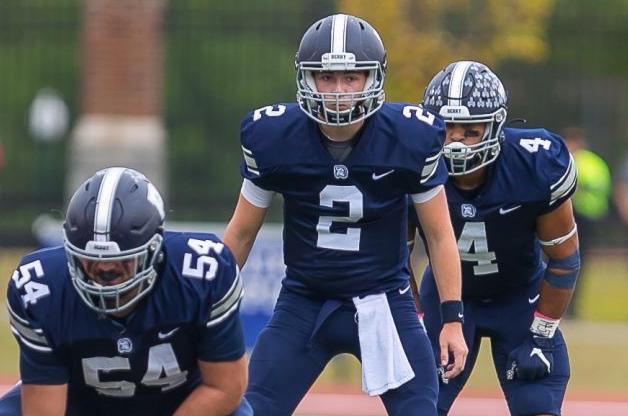 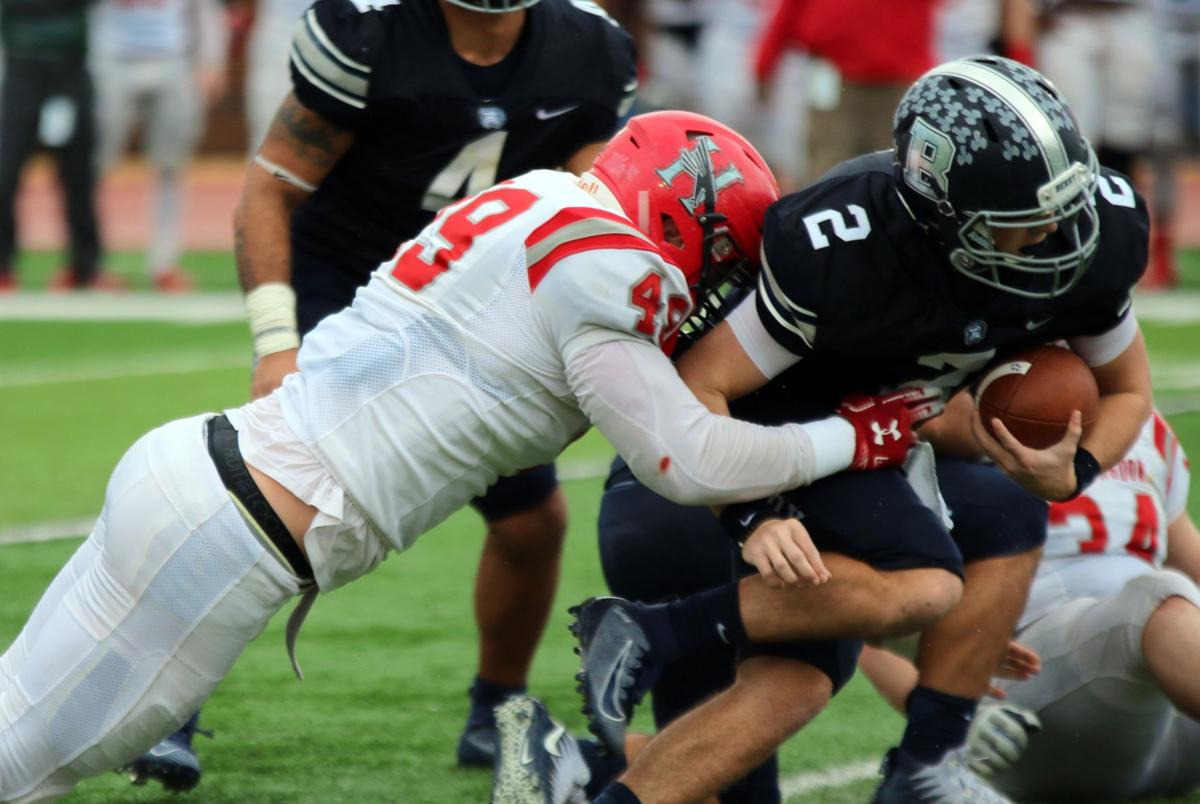 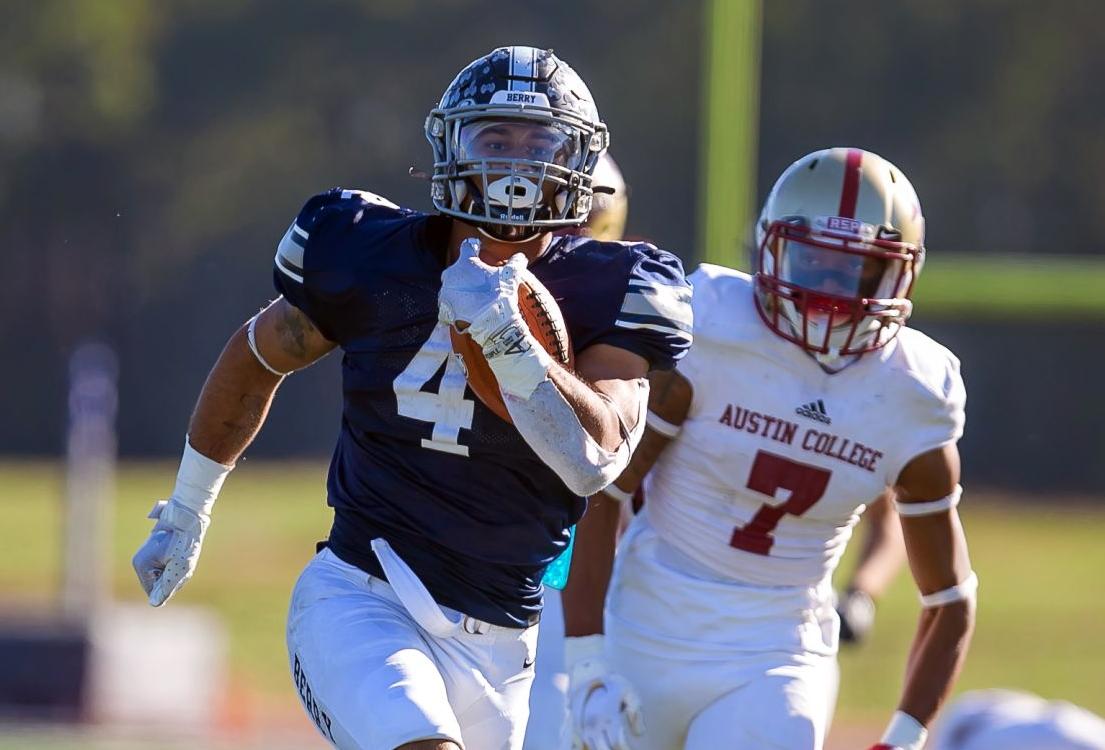 Berry’s Isaiah Dawson races ahead of Austin’s Sharun Jones during a 2019 game at Valhalla Stadium.

Berry’s Isaiah Dawson races ahead of Austin’s Sharun Jones during a 2019 game at Valhalla Stadium.

After months of waiting and continued patience, the Berry Vikings are suiting up to kick off their 2021 spring season.

Yes, you read that right.

College football in the spring.

Due to the COVID-19 pandemic, Berry’s traditional fall college football season was shuttered. However, a replacement arrived in the form of a shortened four-game conference spring 2021 schedule.

Vikings head coach Tony Kunczewski, entering his eighth season at the helm, is excited for the upcoming challenge.

“Our administration, from our athletic director Angel Mason, to our vice president Debbie Heida and president (Steve) Briggs, they’ve worked very hard to get to this point and have really pushed for us to play and for all sports to play within our conference, so I think a big credit goes out to them,” Kunczewski said in a phone interview. “I’m really proud of the attitude the guys have had throughout this process.”

Berry was originally slated to open the spring season at home against Centre, but that contest ended up getting rescheduled to Feb. 27. Instead, the Vikings begin their campaign across the state line in Birmingham and the Birmingham-Southern Panthers.

“We kind of feel fortunate since that game had to get postponed ... (it) allowed us an extra week which we needed,” Kunczewski said. “We’re running out of time because Saturday night is coming. (It’s) going to be a challenge because they’re probably the most talented team in our conference.”

Berry football’s arrival to this point has not been without overcoming hurdles.

Kunczewski said due to COVID restrictions, the entire team could not be together until the group reported for the opening of spring camp on Jan. 11.

“We stated Jan. 11 when we started that hey, we’ve got to take things one day at a time because you never know, tomorrow’s not guaranteed,” Kunczewski said. “We’ve had some bumps along the road. We’ve had some guys that have tested positive (for COVID) and then we’ve had some guys contact traced because of that, but we’ve really been able to stabilize it the last two weeks and have gotten guys back and are starting to get to somewhat full strength right now.”

The NCAA has designated football a “Tier 1 Sport,” which means regular testing throughout the week.

Kunczewski said, despite a 9-2 season in 2019, the Vikings felt like they underachieved as the team fell in the first round to Huntingdon College.

“I’m sure 95% of the country would like to be in our shoes of making the national playoffs, winning a conference championship and hosting a first-round playoff game, but the standard is set high here and we don’t run from that,” Kunczewski said. “We tell our guys you’re either green and growing or you’re ripe and rotting and we feel like, right now, we’ve been a little bit stagnant, so we took the opportunity at the start of last spring semester to get in a different mindset. Sometimes, you just have to reevaluate things and re-center things.”

Regarding the quarterback situation, Kunczewski said Gavin Gray has emerged from winter camp as the primary signal caller. Gray attended Calhoun High School and appeared in 11 games, throwing 15 touchdowns and six interceptions in his freshman season at Berry.

Kunczewski said he is most excited for the seniors getting an opportunity to play an, albeit shortened, senior season. All senior student-athletes have been granted an extra year of eligibility, but Kunczewski acknowledged many of them would likely not return for the fall.

“To be able to do this for them and to have an opportunity for them to leave here winning a conference championship every single season, that’s a huge motivating factor for us,” Kunczewski said.

At this time, the Southern Athletic Association has banned outside patrons from attending conference events. Only students, faculty and staff already on conference-member campuses can attend on a limited basis.

“They have a first-team All-American that we did not perform well against a year ago,” Kunczewski said. “There’s a certain sense that we feel fortunate that we get another opportunity to play them at their place just like we did last football season. We’re excited for the challenge and it’s certainly going to be a big challenge because ... they have veterans all over the field on offense and defense.”