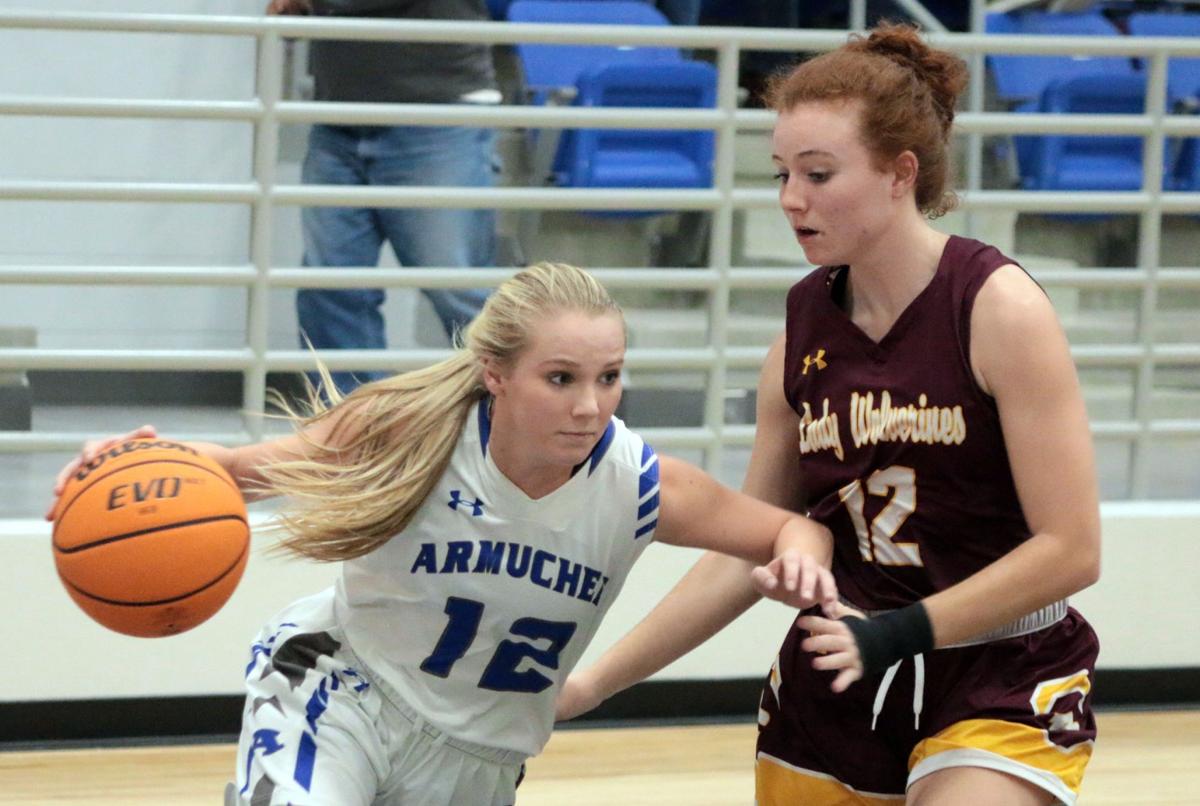 Armuchee’s Chloe Purdy (12) drives the ball to the inside against a Dade County player on Monday during a Region 7-AA game last season at Armuchee High School. 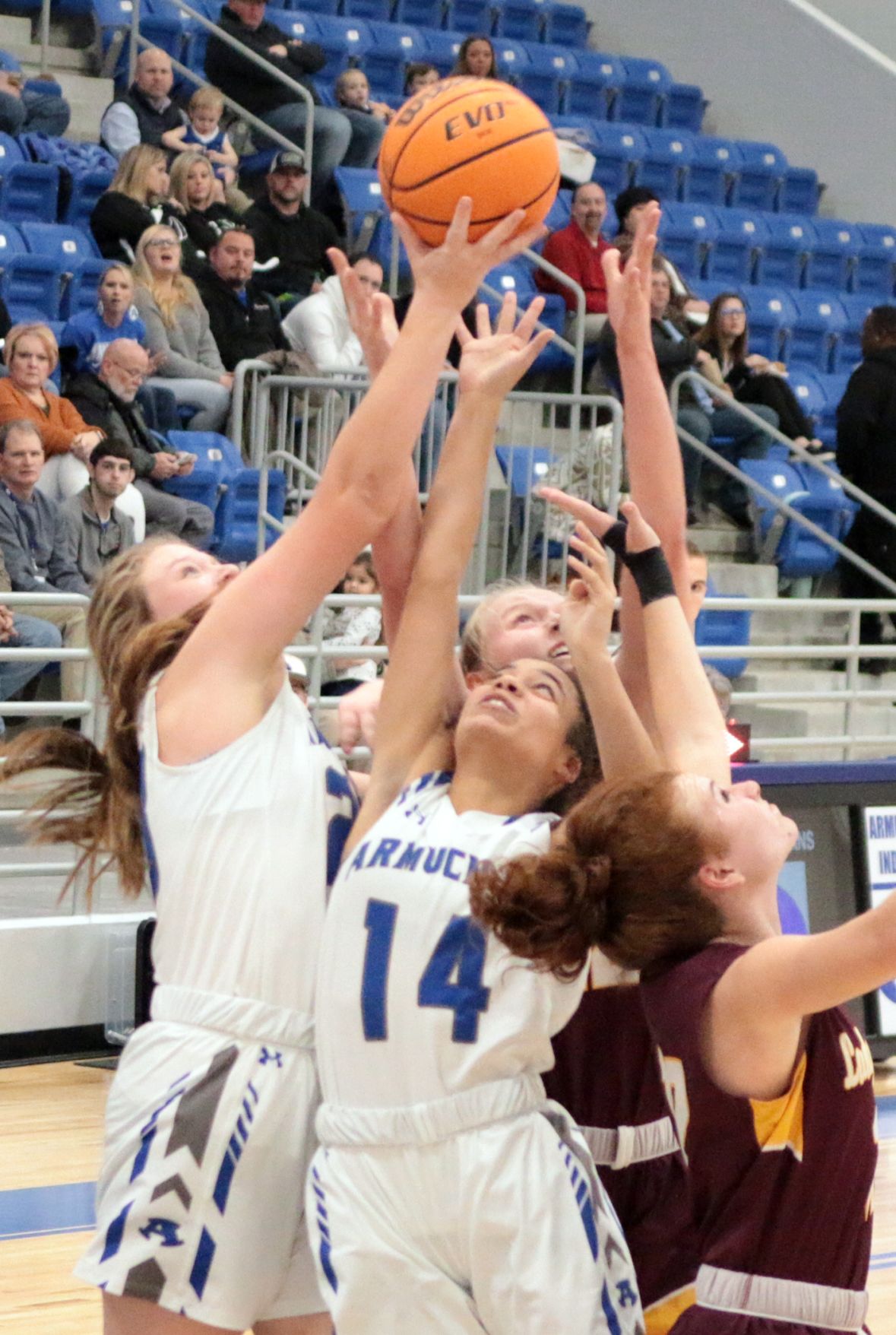 Armuchee’s Olivia Moses (left) and Arionna Dozier (14) contest for a rebound against Dade County during a game last season at Armuchee High School.

Armuchee’s Chloe Purdy (12) drives the ball to the inside against a Dade County player on Monday during a Region 7-AA game last season at Armuchee High School.

Armuchee’s Olivia Moses (left) and Arionna Dozier (14) contest for a rebound against Dade County during a game last season at Armuchee High School.

The Armuchee Lady Indians enter the 2020-21 campaign with high aspirations. After an 11-15 overall record and 6th place finish in the final year of Region 7-AA, Armuchee begins a new tenure in Region 6-A Public, ready to hit the court running.

The Lady Indians saw minimal turnover, as the program graduated two seniors: Katie Shinholster and Grace Stanley. Both were starters.

“Julia Williams and Chloe Purdy have been tremendous point guards for us the past four years,” Lady Indians head coach Michelle Arp said in a phone interview. “Olivia Moses, who is our only junior, has done a really good job inside for us.”

Arp said she hopes senior Arionna Dozier, who tore her anterior cruciate ligament (ACL) in the Region 7-AA tournament earlier this year, will be able to return at some point during the regular season.

“She’s rehabbed really hard,” Arp said. “The athleticism she brings and the speed she provides for our team is a huge asset. Hopefully, she’ll get cleared to play soon.”

Arp said she is most excited for the opportunity to get to play, as there were times high school sports would have been considered doubtful.

“We’re thankful for every opportunity we get in the middle of this pandemic, the time we get to spend together,” Arp said. “With everything shutting down in the spring, I think everyone has a new appreciation of just making the most of every opportunity in practice and in games.”

“Knowing that we could potentially go into this region last year, we did play several of these opponents. We’ve got a little bit of familiarity with some of them,” Arp said. “(Region 6-A Public is) still very competitive just like ... 7-AA was. Just being in a different region and different opponents makes it exciting.”

The Lady Indians have been practicing since the last Monday in October, and Arp said the girls have been very eager to learn in preparation for the season.

“We only have four upperclassmen, so we’ve got a lot of underclassmen that are still learning the game,” Arp said. “Since we didn’t get to have really any summer scrimmages and go to camps or anything, some of it is still fresh that we’re learning. I think that’s something probably everyone in the state is seeing.”

Arp said she met with the seniors and, collectively, they decided the theme for 2020-21 would be ‘unity.’

“Our team is united together through anything that comes up,” Arp said. “We talked about making the most of every opportunity, be thankful for every opportunity, and, at any time, ... because of the pandemic, everybody has to be ready to step up.”

“We’re so blessed we get to have our new ... competition facility the whole school gets to use,” Arp said. “It’s great for our community. Getting to have that gym where everyone can space out with multiple locker rooms is a really big asset for us.”

The Lady Indians open their 2020 season on Saturday, Nov. 21, versus Cartersville. Tipoff is scheduled for 6:30 p.m.

WASHINGTON (AP) — President Donald Trump said Sunday he was “ashamed” for endorsing the Republican governor of Georgia after he lost in the state to Democrat Joe Biden.

A long road to US charges against Islamic State 'Beatles'

Source: Pa. lawmaker gets a positive test at Trump meeting

Biden breaks foot while playing with dog, to wear a boot