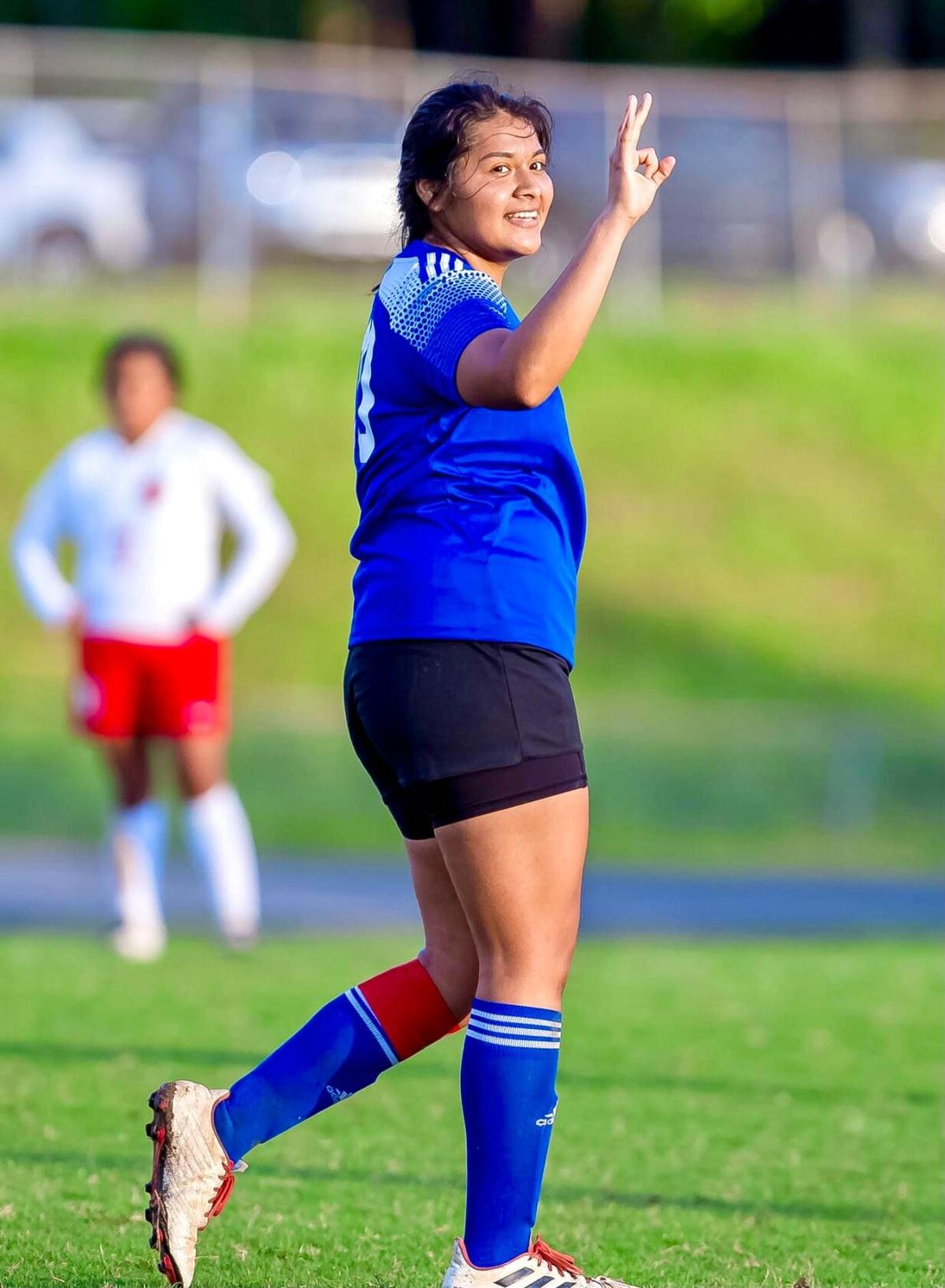 Armuchee’s Melissa Ramos holds up three fingers for the three goals she scored during the Lady Indians’ 5-0 win over Atkinson County at Armuchee High School on Wednesday. 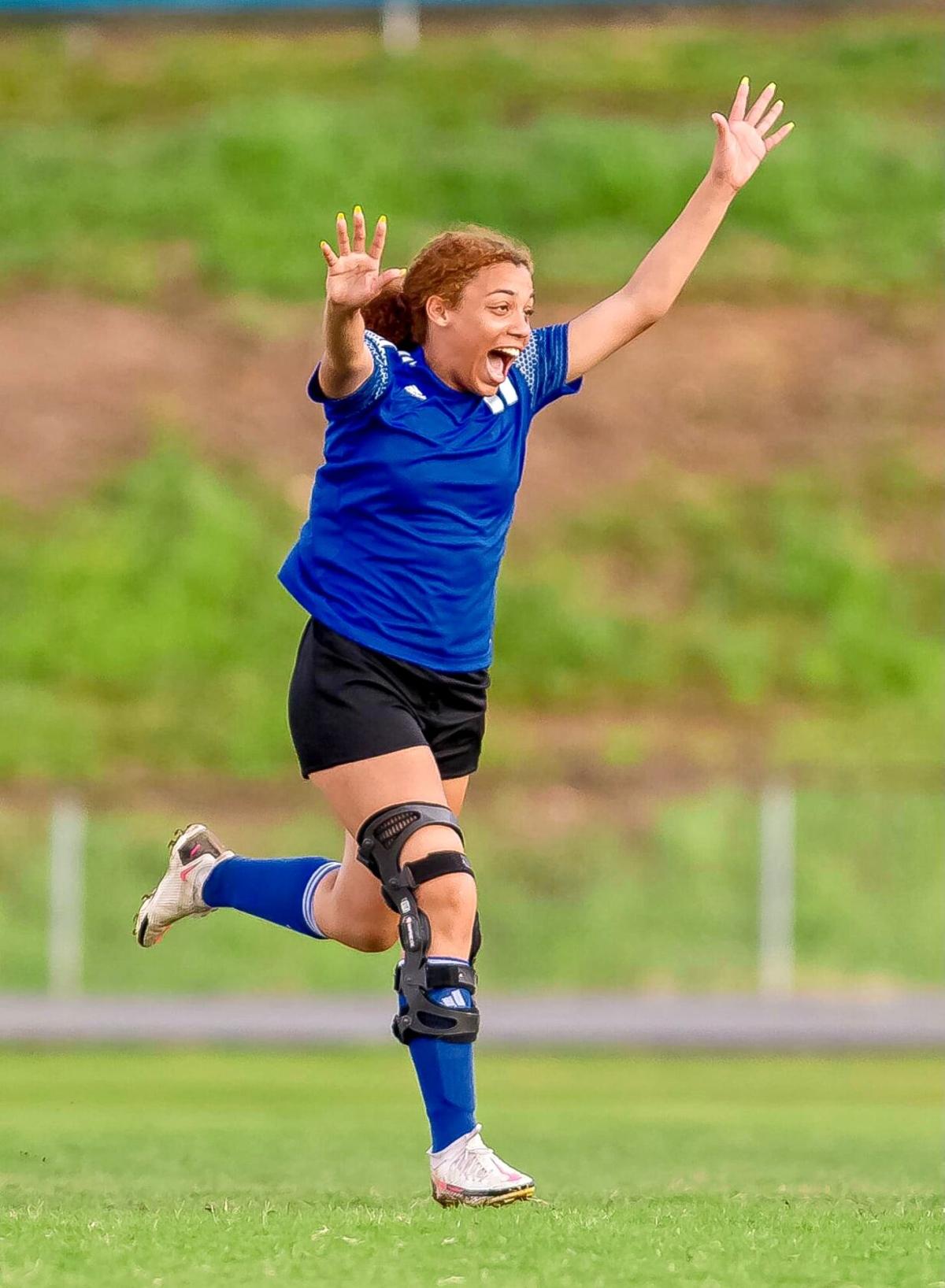 Above: Armuchee’s Arionna Dozier celebrates her goal in the second half of the Lady Indians’ 5-0 win over Atkinson County at Armuchee High School on Wednesday. Below: Armuchee’s Melissa Ramos holds up three fingers for the three goals she scored.

Armuchee’s Melissa Ramos holds up three fingers for the three goals she scored during the Lady Indians’ 5-0 win over Atkinson County at Armuchee High School on Wednesday.

Above: Armuchee’s Arionna Dozier celebrates her goal in the second half of the Lady Indians’ 5-0 win over Atkinson County at Armuchee High School on Wednesday. Below: Armuchee’s Melissa Ramos holds up three fingers for the three goals she scored.

And the Lady Indians passed with flying colors.

Fueled by Melissa Ramos’ hat trick and Delaney Steen’s clean sheet, the Armuchee Lady Indians shut out the Atkinson County Lady Rebels 5-0 at Armuchee High School. The Lady Indians advance on to the final four for the first time in school history.

“This was a big step for them, it was a gut check,” Bettler said in a phone interview. “They were super happy to make sure we sealed it away. You could hear their parents in the stands, so that was very nice.”

Ramos opened the scoring 29 minutes in off a free kick and the Lady Indians were off and rolling. Mercedes McLaughlin doubled the score just four minutes later and Armuchee held a 2-0 edge at halftime.

“That first goal settled them down,” Bettler said. “I told them at halftime ‘We treat it like 0-0.’ We’ve still got another half to put in, but having two goals ... they were much calmer. They were very steady.”

Armuchee (12-4) quashed any hopes of a comeback early in the second half as Ramos tallied her second goal in the 50th minute.

Atkinson County (10-7) had an own goal marked against it in the 75th minute, which was credited to Arionna Dozier. For the cherry on top, Ramos found her hat-trick goal with under a minute remaining in the contest to lock down the 5-0 blanker.

“Melissa had a great game and she’s been steady all year,” Bettler said. “She can get in behind a defensive back line. She was able to get in behind (Atkinson County). Nice finish for her. I was glad for her.”

Steen made three saves in the effort.

When the Lady Indians next take the field, they will have one of their stars back in sophomore Malone Christen.

Christen scored two goals, including the overtime game winner, vs. Social Circle in the Sweet 16 last week, but received two yellow cards during the match which led to a one-game suspension.

The Lady Indians will host ACE Charter on Monday, May 10, with a Class A-Public state final appearance on the line. Kickoff time is yet to be determined.

“We’re able to just have a regular day, keep things as routine as possible.,” Bettler said. “At this stage, every team is quality and I know they can win on the road, but we’ll take every little bit of advantage we can get.”

The race to succeed former state Rep. Bert Reeves, R-Marietta, is headed to a runoff.

Celtic Classic is back with music, competitions, the Showing of the Tartan Parade and more

EDITORIAL: An insider for elections

Bath and Body Works to open at Canton Marketplace in August

Arrest records from the June 16, 2021 edition of the Calhoun Times