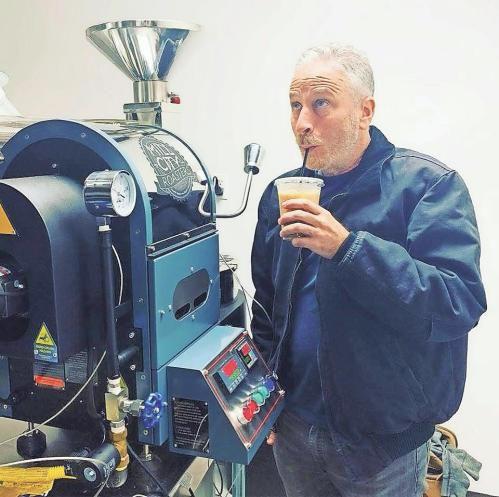 Comedian and director Jon Stewart enjoys a beverage from South Marble Coffee House next to their new roaster during a recent visit to Rockmart.

Comedian and director Jon Stewart enjoys a beverage from South Marble Coffee House next to their new roaster during a recent visit to Rockmart.

Jon Stewart's latest directing project will be bringing big stars to downtown Rockmart and the surrounding area in the weeks to come as the city was selected to play host to a setting for "Irresistible," coming to theaters in the near future.

Stewart's forthcoming second directing stint will bring him to Polk County alongside some notable stars, including Steve Carell, Academy Award winner Chris Cooper and the recently announced addition of Rose Byrne to the cast. News of several more additions to the cast is expected to follow.

He's been spotted around town and even tried out a frozen brew at the South Marble Coffee House in downtown Rockmart, along with stopping by other downtown buildings as crew members prepare for an April shooting schedule.

"It was our first day with our brand new coffee roaster and we're now roasting our own beans in house," Vaagen said. "It was such a great experience to have Jon Stewart there for the inaugural roasting."

Rockmart Mayor Steve Miller said during the March 19 meeting of Polk County Rotary Club that the development was an exciting proposition for both the city and Polk County as a whole.

"This movie will be a big thing for Rockmart, and we expect some big-name stars to come to our town," Miller said. "There have been open casting calls and they were at Welshfest signing people up as extras. I hope everyone participates. It's just another good thing we have going on in Rockmart."

The forthcoming filming marks the latest feature to choose Polk County as a location after HBO brought a portion of their "Watchmen" series to downtown Cedartown, along with Season 3 of "Hap and Leonard" and "Jayne Mansfield's Car."

Missy Kendrick, CEO and president of the Development Authority of Polk County and the film liaison with the state, said she was additionally glad to see Rockmart chosen for "Irresistible."

"We have been working with Andrew Ullman, the location manager, on this film for months now, and I am very happy to see them choose Rockmart," Kendrick said. "They will be filming from April through May and will be bringing up to 200 people — including extras — into downtown, not to mention those who just want to come watch. This is a great opportunity for the businesses to promote themselves when the time is right. You can feel the excitement building all over town!"

Ullman also added his positive reviews of Rockmart and Polk County as a new filming location.

"I am so glad we found Rockmart and Polk County," Ullman said. "The town and Missy, the film liaison, have been very helpful and have made it very easy to work here. This has been a great experience so far and I have shared this with the state film office."

The new film is being produced by Stewart along with Brad Pitt's Plan B Entertainment and Focus Features.

Carrell is slated to be cast in the role of a Democratic political operative who is helping a veteran run for mayor in a small Wisconsin town that Rockmart will play the setting of, opposite Byrne, who is the political adversary in the storyline.

A springtime schedule is expected for filming in downtown Rockmart, which will include South Marble, Church Streets and other surrounding areas, while production crews are in town. Full dates and details about road closings and accessing downtown will be forthcoming.

Stewart, former host of "The Daily Show with Jon Stewart" on Comedy Central, enters his latest directing role behind the camera after his 2014 debut in the political drama "Rosewater." The political drama centered around the story of Iran's imprisonment of journalist Maziar Bahari, the focus of stories on "The Daily Show" and later a guest on the show after his release.

Carell, a "Daily Show" veteran and comedian, signed on to the film early for the lead role. He starred in the lead in the 2018 feature "Welcome to Marwen," but he's best known as Michael Scott on the U.S. version of "The Office," for "Little Miss Sunshine" and "Foxcatcher," along with the role of Andy in "The 40-year-old Virgin."

Carell is also reported to be involved in the new Netflix show "Space Force."

Byrne's recent successes on the large screen include roles in "Neighbors," "Bridesmaids," "Spy" and "Insidious" among many other film credits.

Filmmakers are also looking for extras to take part in the downtown filming, and were recently at WelshFest 2019 signing up individuals to take part.

Those interested may email Prep@RoseLockeCasting.com. Send a few pictures — headshots are not required — just a selfie and those with a picture that is full body, include that, too. Don't forget to include contact information, and put "ROCKMART LOCAL" in the subject box.

Nic Claxton is the breakout player Sean Marks banked on

After 2 presidents failed, can Biden actually get infrastructure done?

Larry Stone: The Mariners should go after Theo Epstein to clean up the mess they made