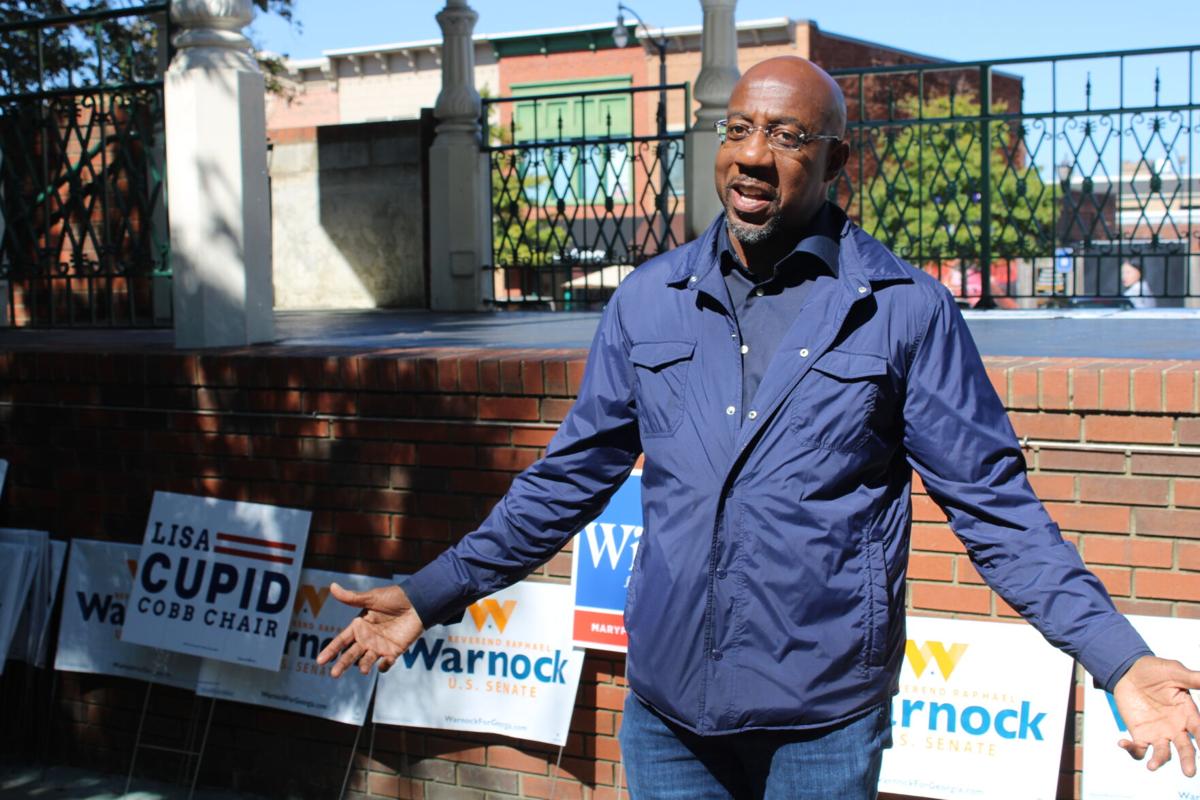 The Rev. Raphael Warnock, a Democratic candidate for U.S. Senate, delivers a stump speech at Marietta Square on Saturday. 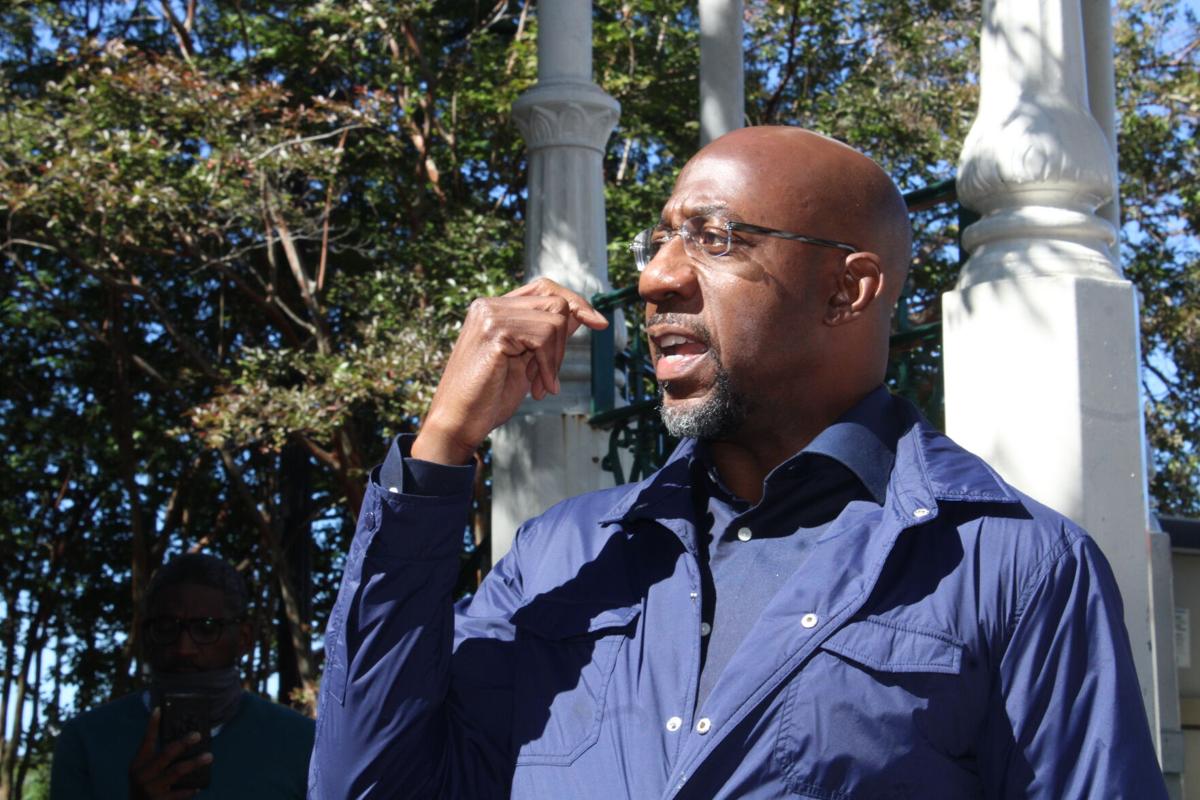 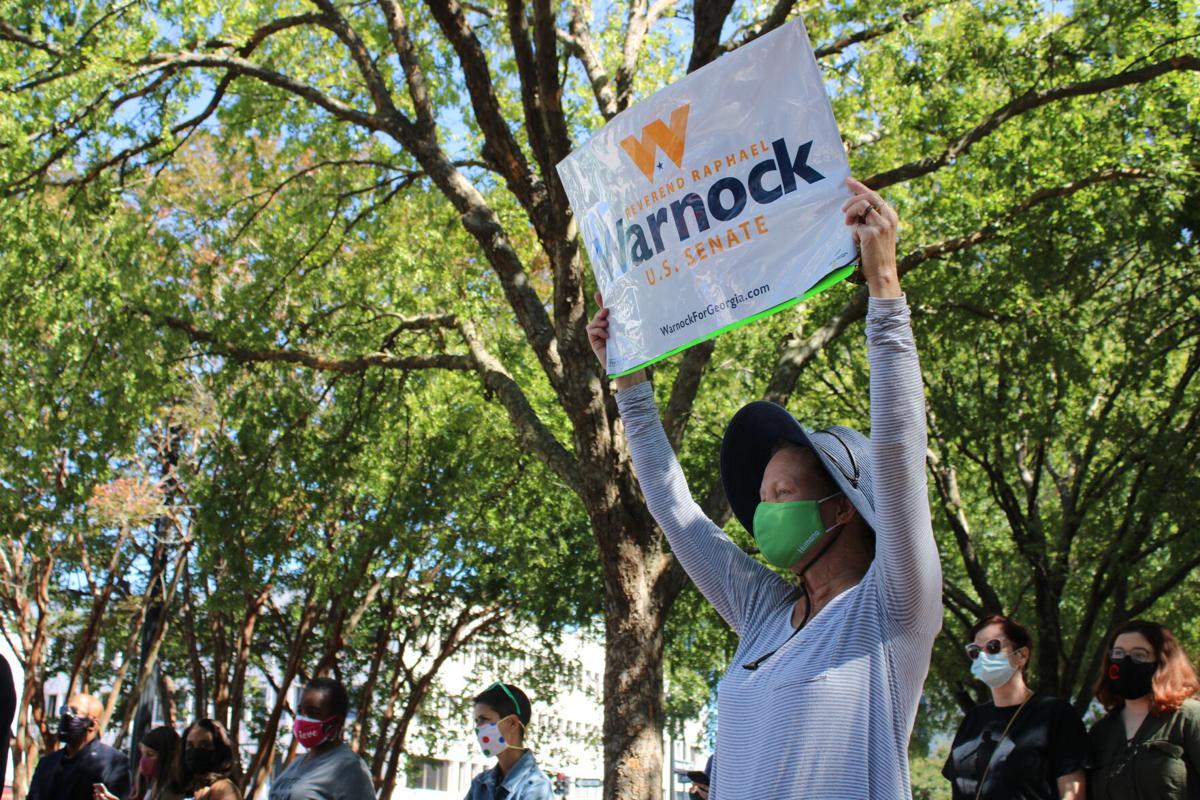 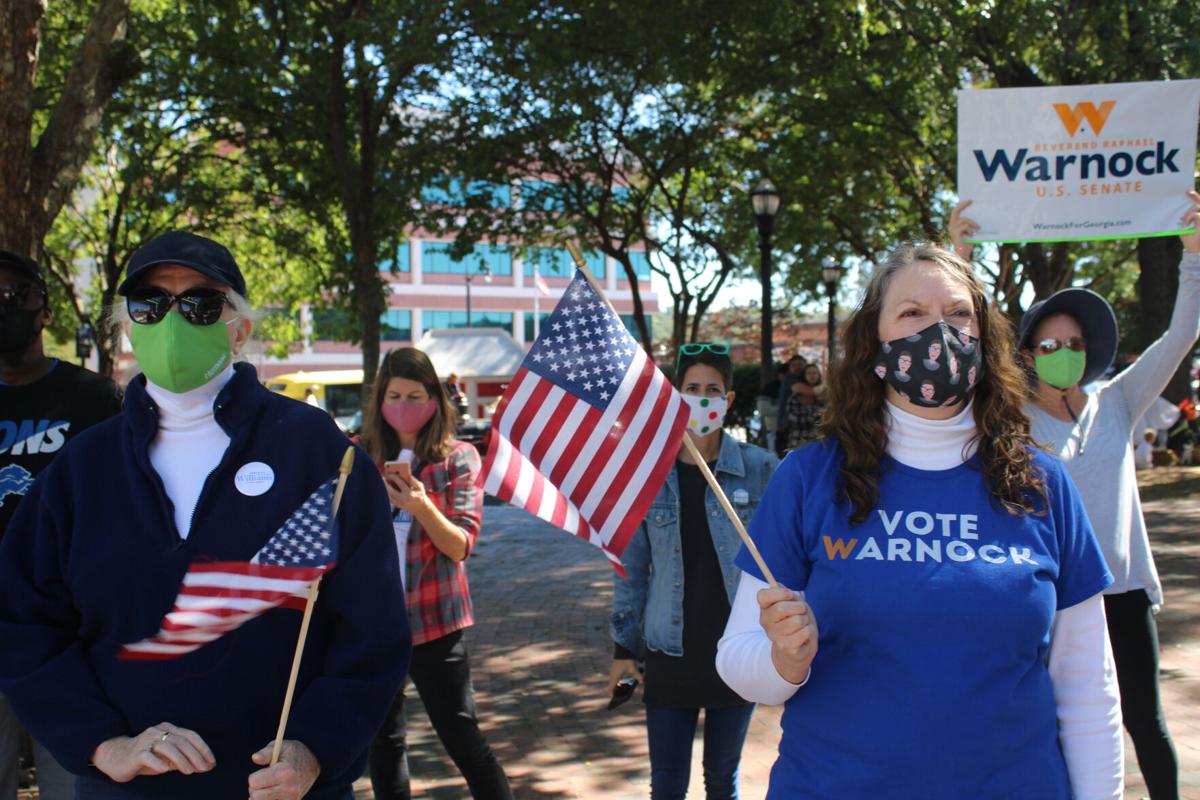 Supporters listen to the Rev. Raphael Warnock, D-Georgia, as he speaks at Marietta Square on Saturday. 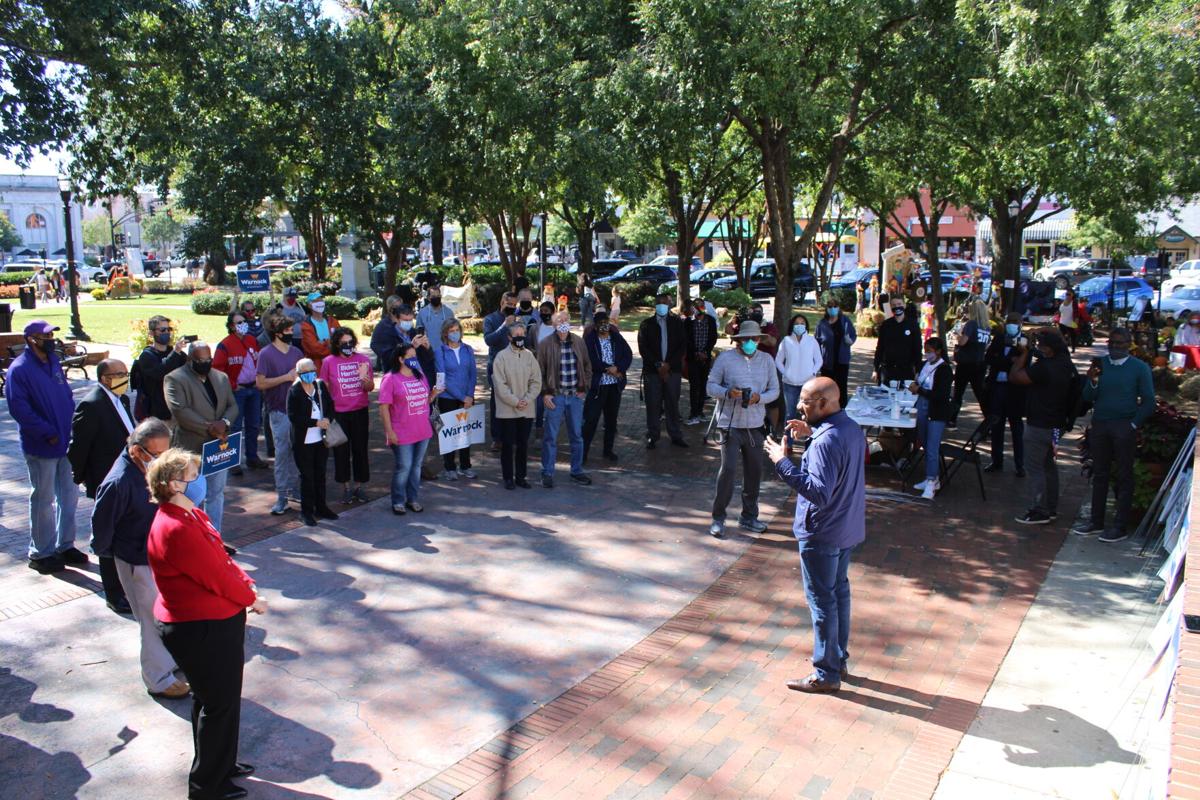 Supporters listen to the Rev. Raphael Warnock, D-Georgia, as he delivers his stump speech at Marietta Square on Saturday. 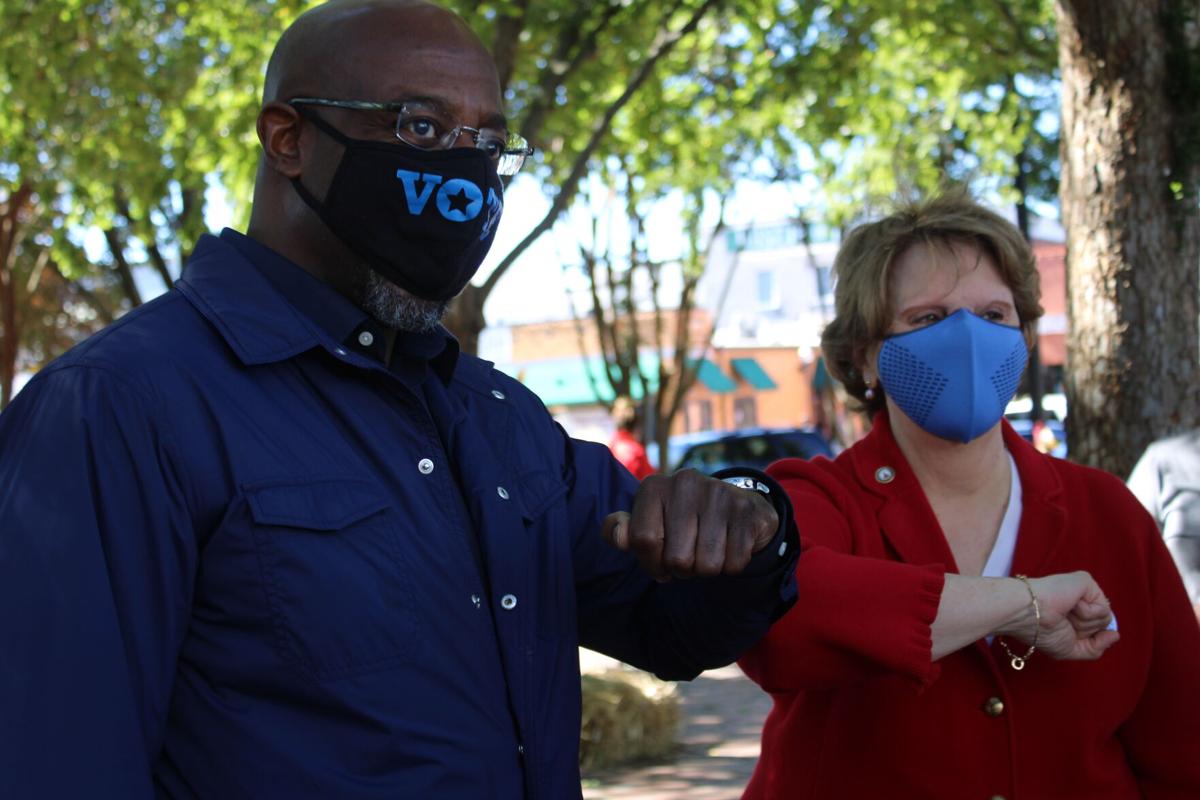 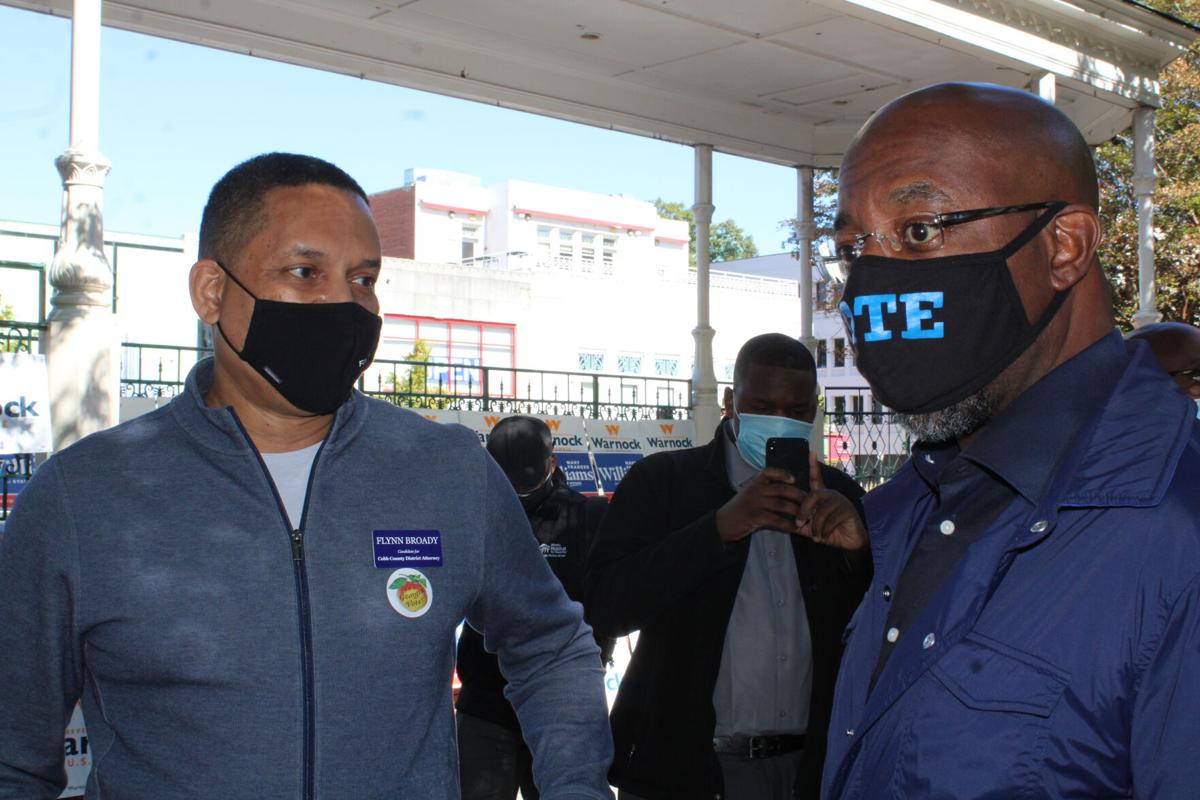 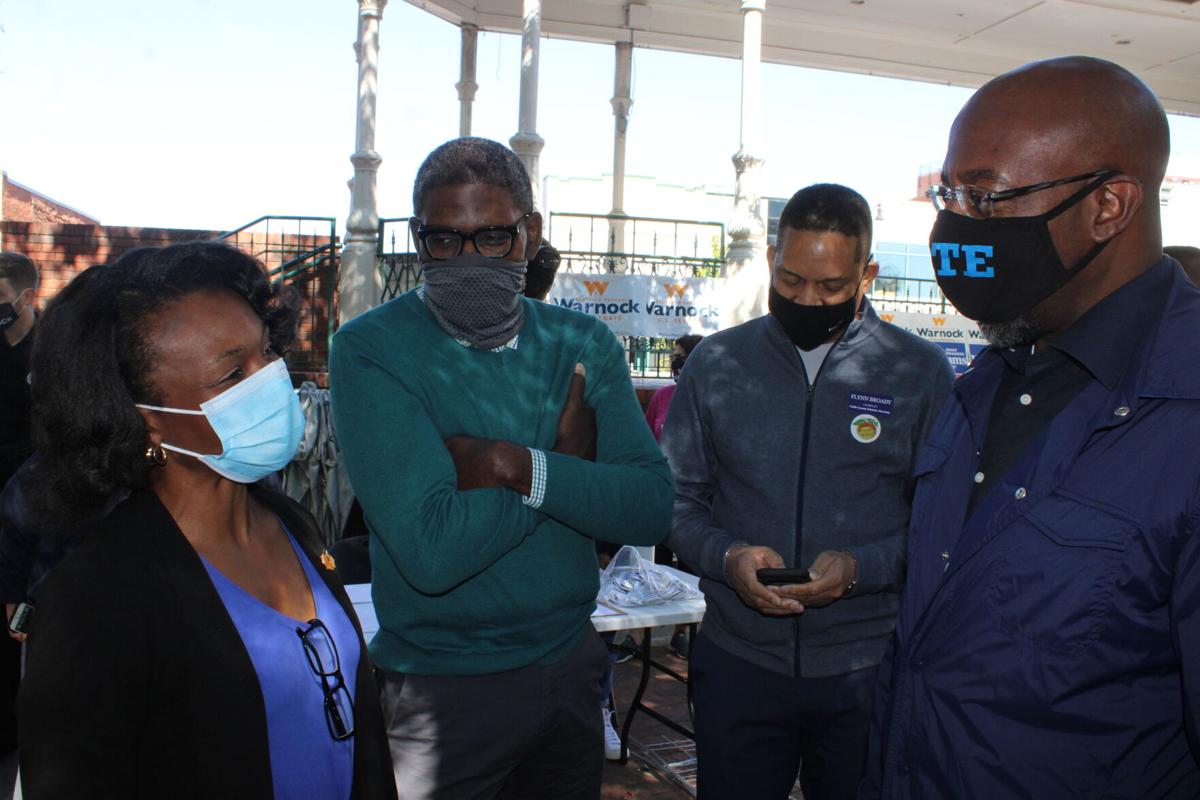 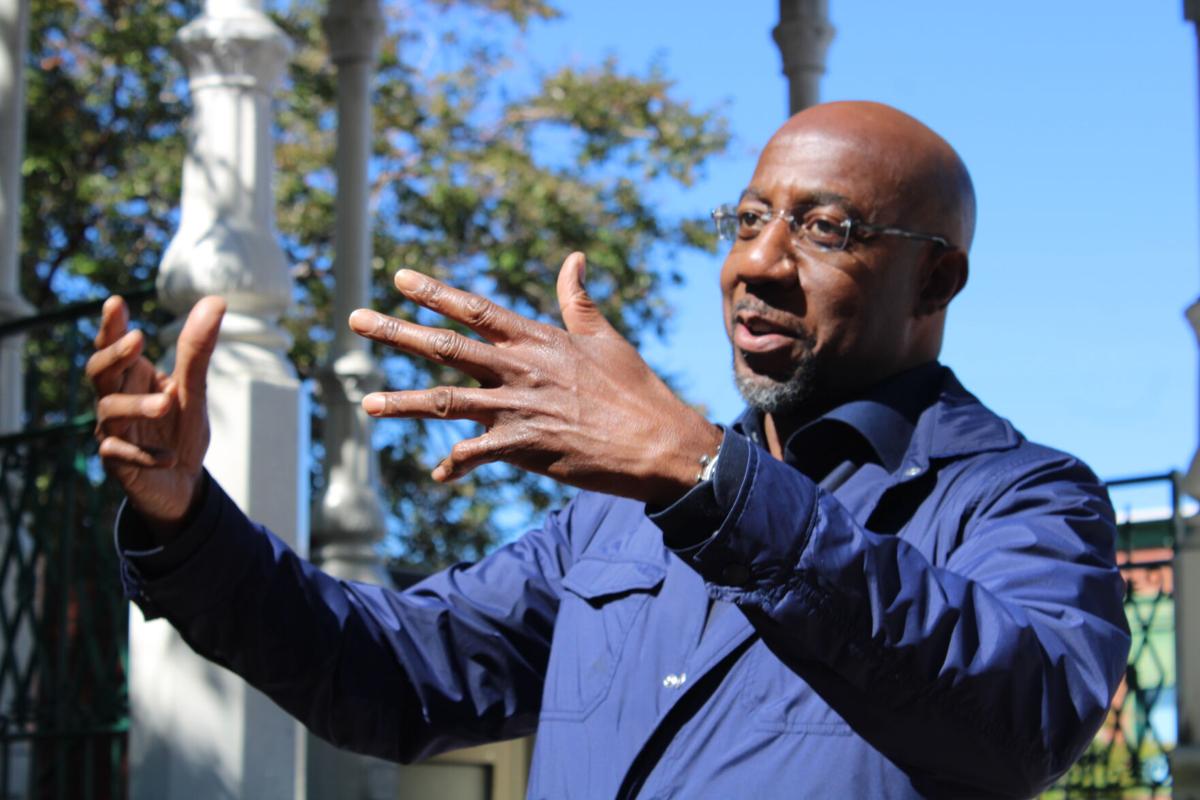 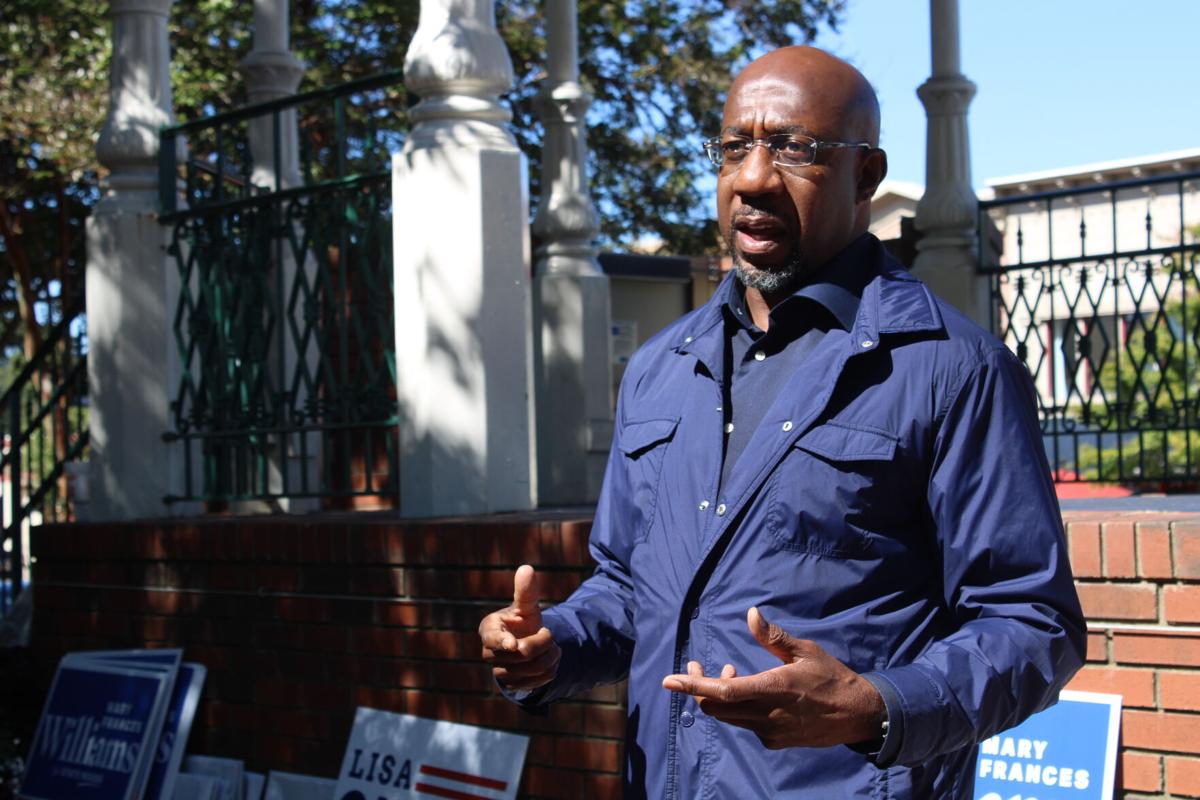 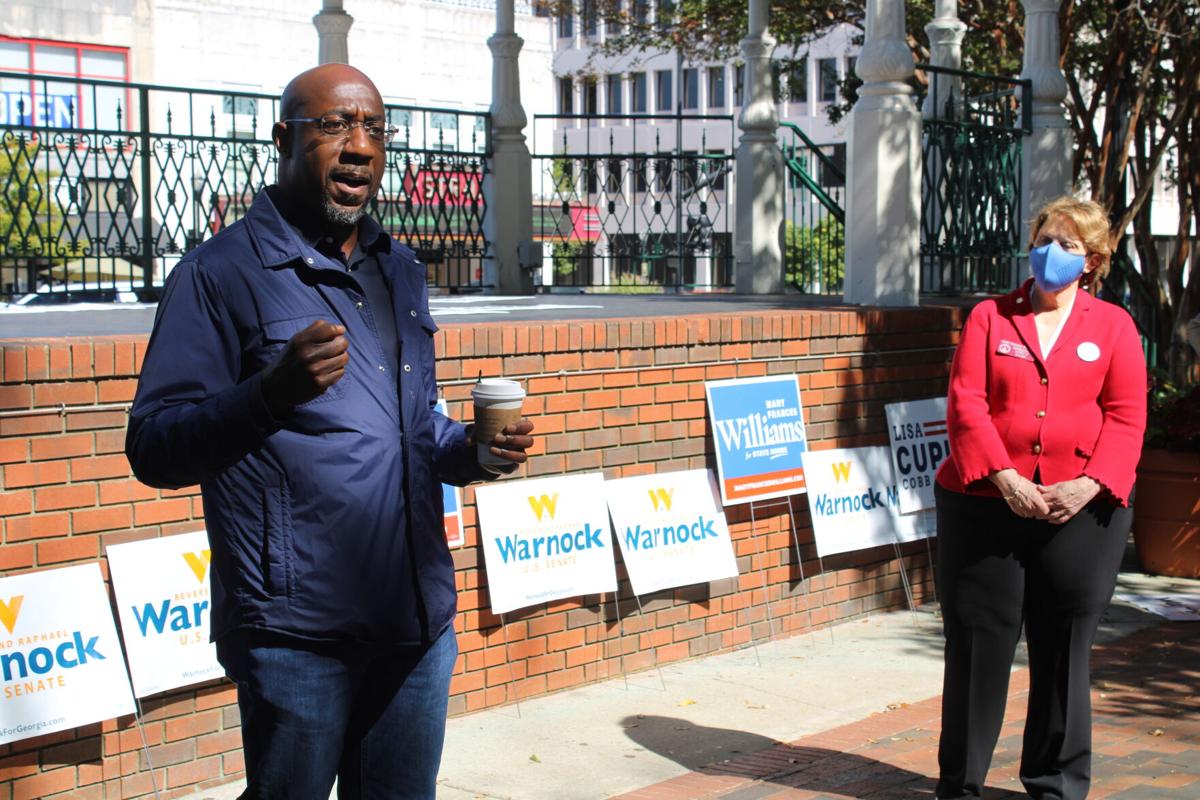 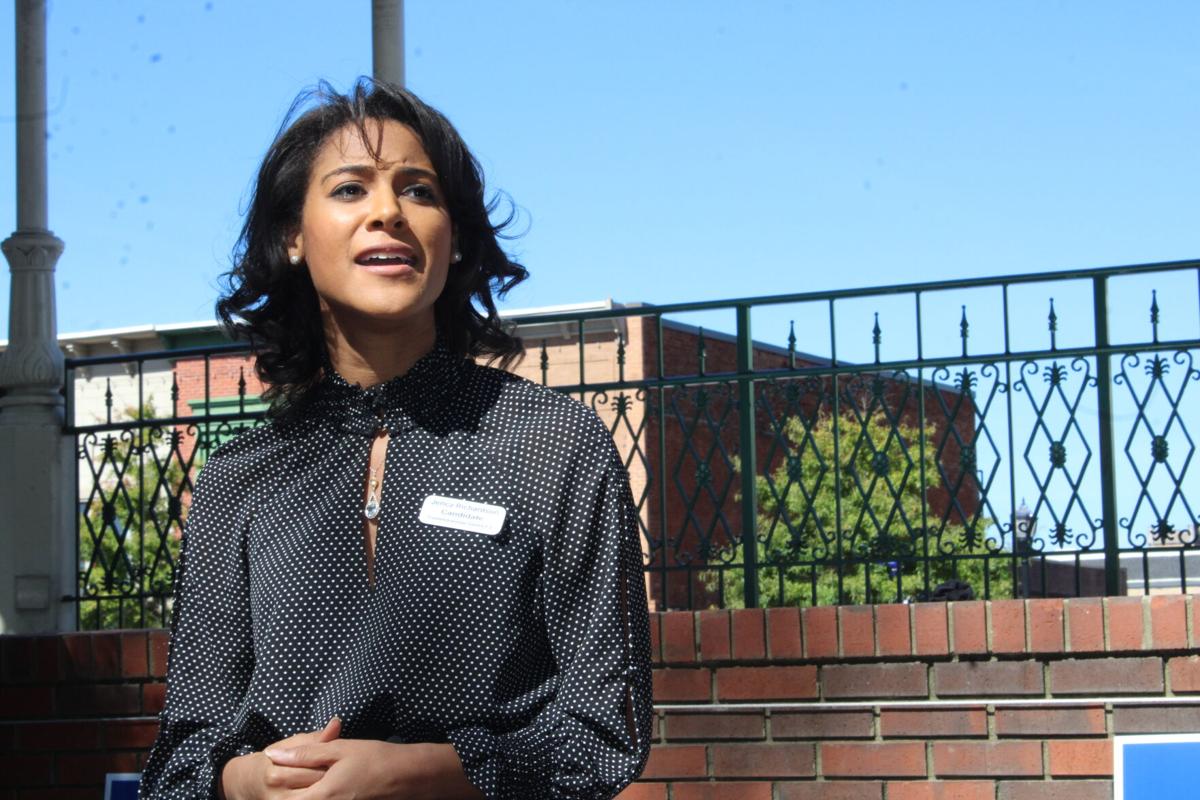 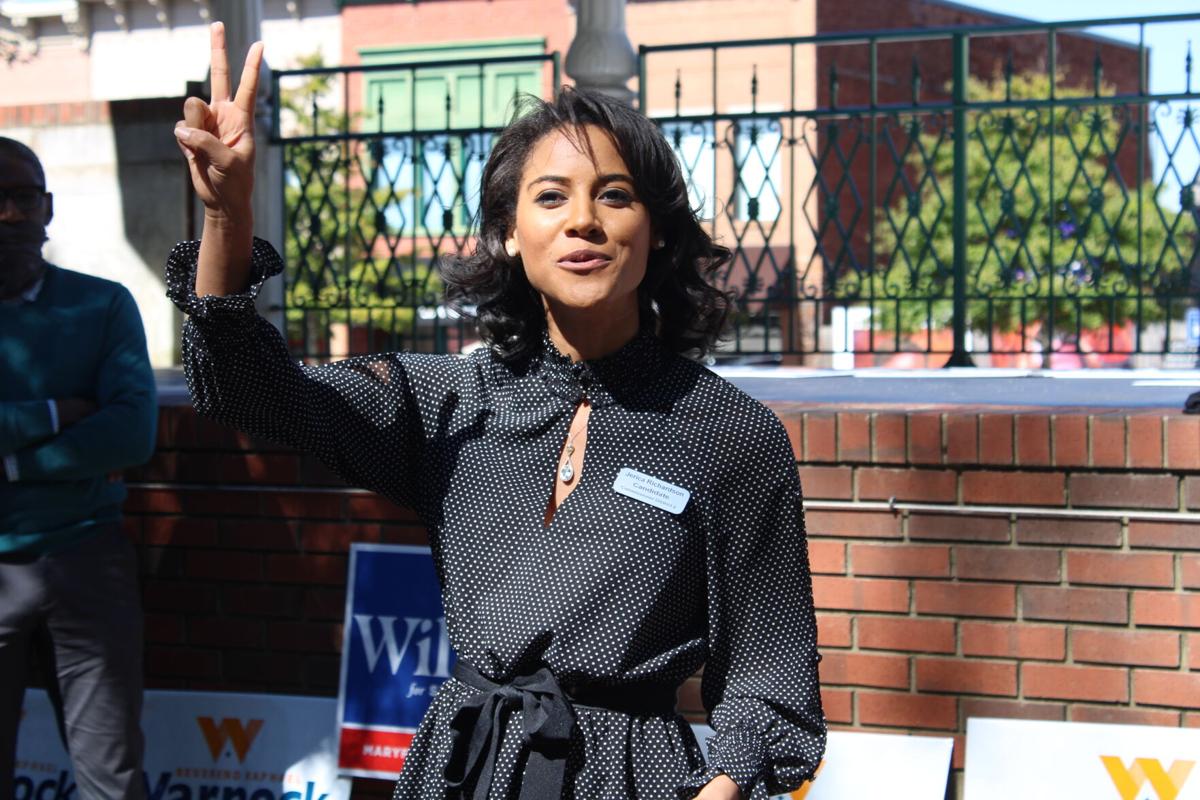 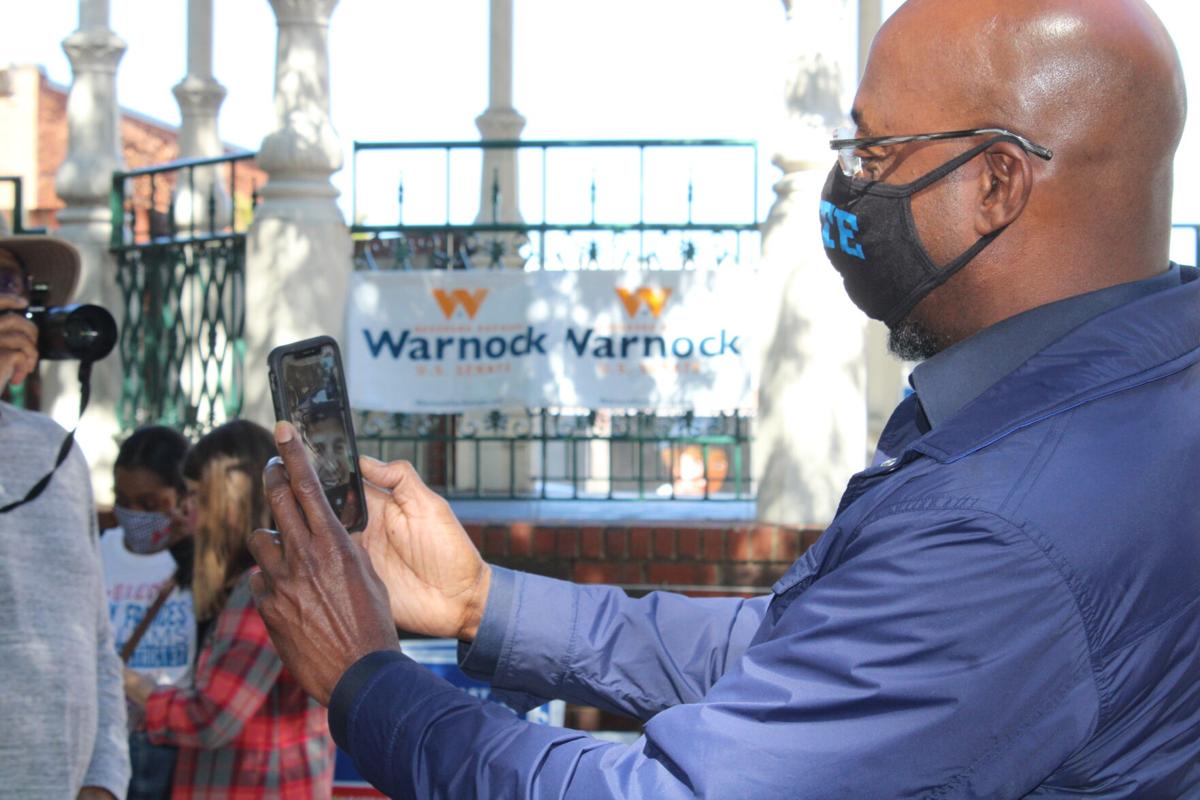 The Rev. Raphael Warnock, a Democratic candidate for U.S. Senate, delivers a stump speech at Marietta Square on Saturday.

Supporters listen to the Rev. Raphael Warnock, D-Georgia, as he speaks at Marietta Square on Saturday.

Supporters listen to the Rev. Raphael Warnock, D-Georgia, as he delivers his stump speech at Marietta Square on Saturday.

MARIETTA — With Election Day less than three weeks away, a Democratic candidate for U.S. Senate made a stop in Marietta on Saturday afternoon to deliver his stump speech to Cobb County residents.

The Rev. Raphael Warnock, one of almost two dozen candidates in the Nov. 3 jungle primary to fill the Senate seat of the retired Johnny Isakson, told dozens of supporters at Marietta Square about his goals to improve worker pay, increase access to health care and pass a new voting rights act in honor of the late Congressman John Lewis.

“It’s hard to overstate the stakes of this election,” Warnock said. “Health care is on the ballot. The dignity of workers in need of an essential wage to match the title ‘essential workers,’ the future of our children and the planet are all on the ballot.”

Warnock, the pastor of Atlanta’s Ebenezer Baptist Church, formerly led by the Rev. Martin Luther King Jr., told about 85 supporters at Marietta Square that his goal is to “amplify the voices of ordinary people.”

“I’m deeply honored to be running for the United States Senate at this defining moment in our nation’s history,” Warnock said. “We’ve got big public policy debates that we’re having. Debates about health care, about the dignity of work, about access to a good quality education. We’re dealing with major crises, any one of which in ordinary times would define an entire election, and we’re dealing with all of them at the same time.”

The good news, Warnock said, is American citizens have the ability and “sacred responsibility” to exercise their voice at the ballot box.

The jungle primary features 20 candidates, including Republicans Kelly Loeffler, who was appointed by the governor to fill the seat until November’s election, and Georgia Congressman Doug Collins. Warnock said he is unlike any other name on the ballot because he has dedicated his life to service.

“The last 15 years, I’ve served as pastor of Ebenezer Baptist Church, but I’ve always been very clear that my influence does not end at the church door. That’s actually where it starts,” Warnock said. “And so I think that a good indication of what someone will do when they’re in office is what they were doing before they ran for office.”

The pastor said he spent his adult life fighting for affordable health care, pleading with state leaders to expand Medicaid in Georgia. He said he has helped to register thousands of new voters and stood up for the dignity of workers.

The Democrat then made a more pointed case to Cobb County voters, saying that the causes he is pursuing will benefit all in the community.

“We need people all across Cobb County and the metropolitan area to recognize the ways in which our destiny is one,” Warnock said. “If my neighbor doesn’t have health care, that impacts me. The refusal of our state to expand Medicaid has implications for me, whether I personally need Medicaid or not.”

Warnock said the pandemic has uncovered and further exacerbated existing problems and inequalities, noting that community members should want everyone to have access to public services.

“An airborne deadly disease has reminded us that, if my neighbor coughs, that has implications for me. I should want that person covered,” Warnock said. “But not only that, I should want their children to have access to a good quality education.”

One Warnock supporter in the crowd on Saturday, Nancy Conger, is a Marietta resident who voted early by turning her absentee ballot in to a drop box. She said she likes Warnock because he advocates for equal rights for all people.

“As citizens, we all should have equal access,” she said. “I myself believe in universal health care, that everybody should have equal rights to healthcare. And I’m a (registered nurse), so I’m kind of a bit of an insider on that.”

Conger said she was impressed by Warnock’s life story. Warnock grew up in Savannah public housing, was the 11th of 12 children and was the first college graduate in his family. But Warnock said he had the help of Pell Grants and other public policies to pay for school.

“Good federal public policy enables ordinary people to live their best lives,” Warnock said. “And when we invest in our children, it’s a mighty good investment.”

“This year is such an important election year,” she said. “As (Warnock) indicated, we have to vote from the top of the ballot down to the bottom of the ballot.”

'Crazy' beekeepers determined to make it in tough times