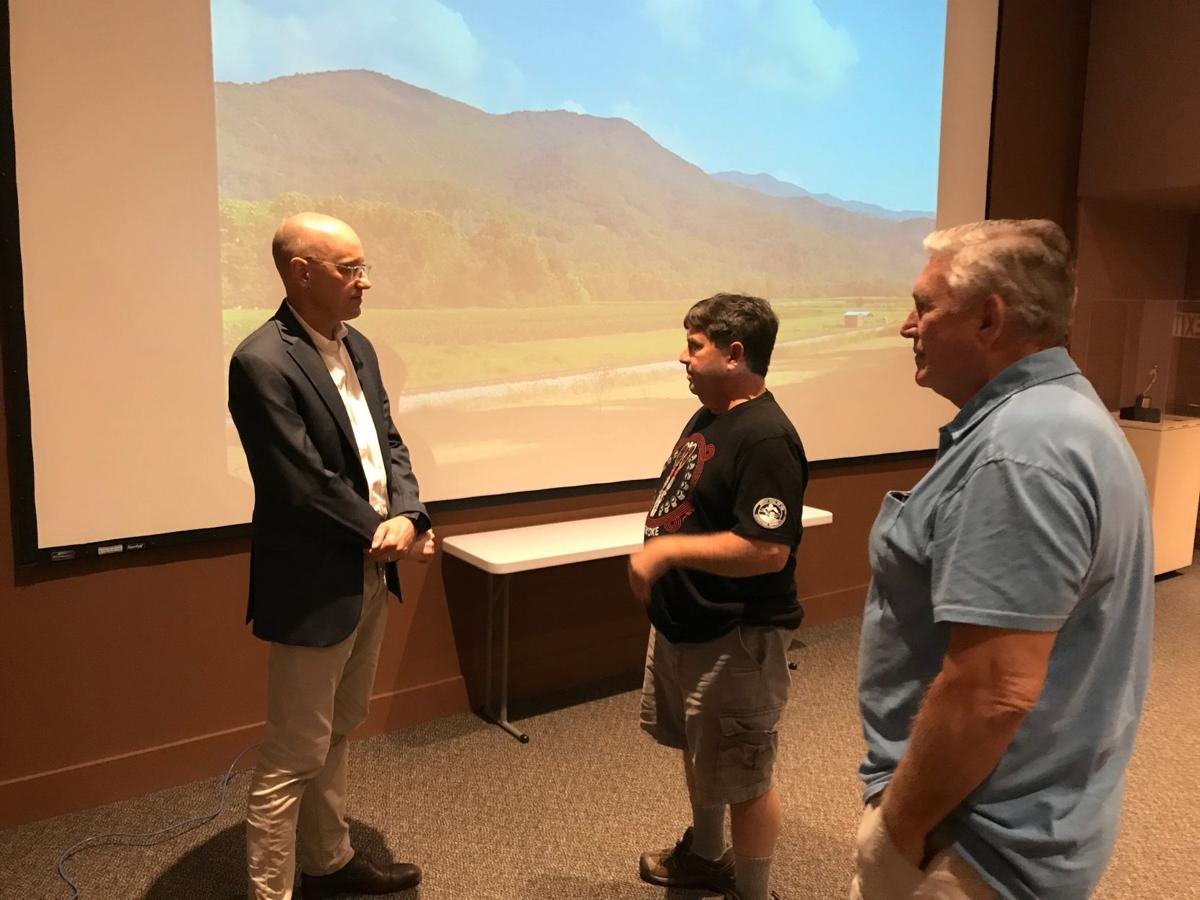 Professor Andrew Denson, left, from Western Carolina University meets with attendees at a recent event at the Funk Heritage Center following a presentation Denson gave regarding how towns in the Southeast have commemorated the Native American nations that were forcibly removed from the area in the 1800s. 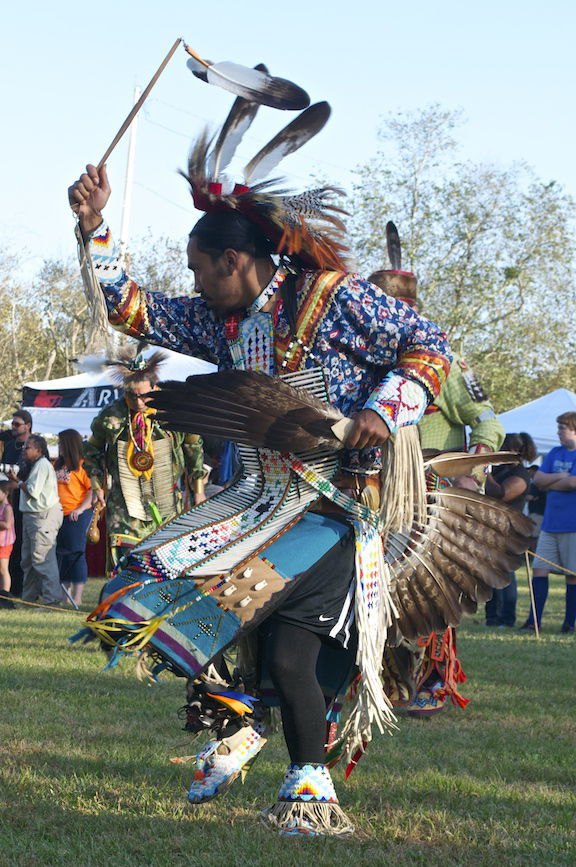 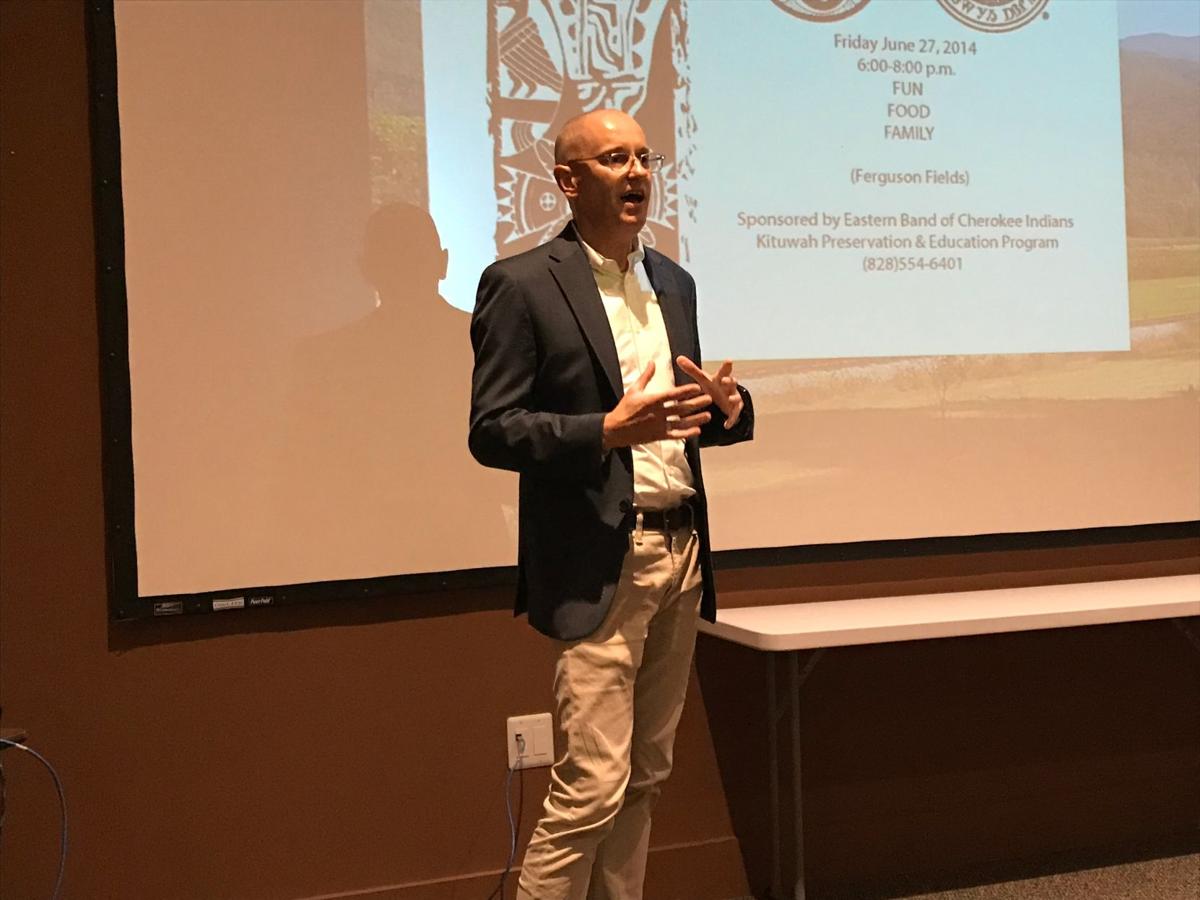 Professor Andrew Denson from Western Carolina University speaks to guests about how cities throughout the Southeast have commemorated Native Americans during a recent event at the Funk Heritage Center.

Professor Andrew Denson, left, from Western Carolina University meets with attendees at a recent event at the Funk Heritage Center following a presentation Denson gave regarding how towns in the Southeast have commemorated the Native American nations that were forcibly removed from the area in the 1800s.

Professor Andrew Denson from Western Carolina University speaks to guests about how cities throughout the Southeast have commemorated Native Americans during a recent event at the Funk Heritage Center.

In a county named for the Cherokee people, a North Carolina professor recently discussed how people in the Southeast remember those who first populated the area.

Professor Andrew Denson from Western Carolina University shared stories of how Southern communities have remembered the native peoples who once settled this area during a special presentation recently at the Funk Heritage Center at Reinhardt University in Waleska.

Having studied the subject of public history and public memory extensively, Denson talked about a book he wrote on how communities throughout the Southeast have remembered the various Native American nations who called this area home.

Despite the extensive history of the Southeast when it was inhabited solely by Native Americans, Denson said many of the memorials built in the South to commemorate these nations are more inclined to talk about the period of removal, when the natives were forced out of the area and made to settle in present-day Oklahoma. A number of others refer to the role native peoples played within the context of the larger narrative of American settlement in the area. For example, part of what is today Franklin, North Carolina was once the Cherokee village of Nikwasi and was an important settlement on the Little Tennessee River. However, a historical marker placed at a mound that was part of the town simply states that the mound marks the site of Nikwasi, where a treaty between the British and the Cherokee was signed in 1730.

The grave of the Cherokee leader Junaluska in Robbinsville, North Carolina was marked with a monument in 1910 by a local chapter of the Daughters of the American Revolution. A plaque placed on the monument explains how Junaluska saved future president Andrew Jackson’s life during the Battle of Horseshoe Bend in 1813 before being officially recognized as a citizen of North Carolina and granted land there.

Similarly, the city of Chattanooga, Tennessee lists Cherokee leader John Ross as one of the city’s founders, as the city was established on the location of the settlement of Ross’s Landing, which Ross helped create.

While all of the statements on these memorials and others may be true, Denson said it glosses over much more of the history of these Native American nations. As a major Cherokee settlement in the area, Nikwasi has a much richer history than simply being the site of a treaty between the natives and British. Junaluska was not recognized as a citizen of North Carolina and presented the land until after he had made his way back to the state from being removed to Oklahoma. While Ross did help establish Ross’s Landing, the city of Chattanooga was not officially founded until after Ross and the Cherokee had been removed. In fact, Ross’s Landing was used during the Trail of Tears as an “emigration depot” to help facilitate the Cherokee removal.

When examining this and believing the narrative that had been presented for years to not be the best way to remember the Native Americans, Denson said one key question came up — “If you’re critical of how it’s being told, what do you want to see?” To this end, one thing Denson said he and others have dedicated themselves to is changing the narrative that has been presented, moving away from a focus on the native people being removed from their ancestral homeland and delving deeper into the history of nations like the Cherokee.

Similarly, communities throughout the region have sought ways to open up a dialogue with Native Americans to better preserve the land and commemorate those who resided there for centuries. One such instance occurred when some of the grass on the Nikwasi mound was killed off. In response, the city and other parties like the local historical society reached out to members of the Cherokee nation in North Carolina to talk about local Native American heritage and how to protect land in the Little Tennessee River valley. This has led to ongoing discussions between the city and the Cherokee, while Franklin presented the mound to a non-profit organization. The community of Cullowhee, North Carolina, where the main campus of Western Carolina University is located, has recognized the immense amount of Cherokee history the area has, as has the university, although Denson said this history has been fairly romanticized over the years. More recently, Denson said the area has been trying to cultivate the concept that it is not just an ancient Cherokee place, but also a modern Cherokee place. With plans to expand its campus with additional buildings, Western Carolina has undertaken an archaeological dig on campus that has unearthed a number of items from the years when the Cherokee would have inhabited the area. Along with this, one of the buildings on campus was named after the legendary figure Judaculla, a giant who inhabited the mountains, according to the Cherokee, and a monument on campus helping remember the rich Cherokee history of the area is in the shape of one of the symbols of the Cherokee syllabary.

Lastly, Denson said the Eastern Band of Cherokee has been working to reacquire some of the land that was historically Cherokee to preserve it and the heritage it represents. This includes the site of Kituwa, which was an important village during its history, along with a handful of other locations.

Following his presentation, Denson fielded a handful of questions from the audience, such as how strong the Eastern Band of Cherokee is and the history of the dig site on the Western Carolina campus. Denson was unsure of an exact population number for the Eastern Band of Cherokee, but believed it was somewhere between approximately 12,000 and 15,000, while the tribe sees a large swath of the Southeast as cultural heritage land and the gaming centers it operates has given it both an economic boost and a stronger voice. With a desire to reclaim the Cherokee heritage that was lost, Denson said the Eastern Band of Cherokee have been relatively strong sponsors of archaeological digs, including the one in Cullowhee. Although the site on campus is deep and fairly complicated, Denson said there have been artifacts unearthed there that date back several hundred years.

After the event, Denson said he felt the day had gone well and hoped his audience had taken away a great deal from his presentation.

“I really enjoyed it,” he said. “I like people to be aware that this heritage work is continuing, and there are a lot of things being done. I encourage people to be more aware of the deep history of places, and think about how the South is still a native place, because their history isn’t over.”

Wall Street rallies to close out strong, but wild quarter

US says it will block palm oil from large Malaysian producer