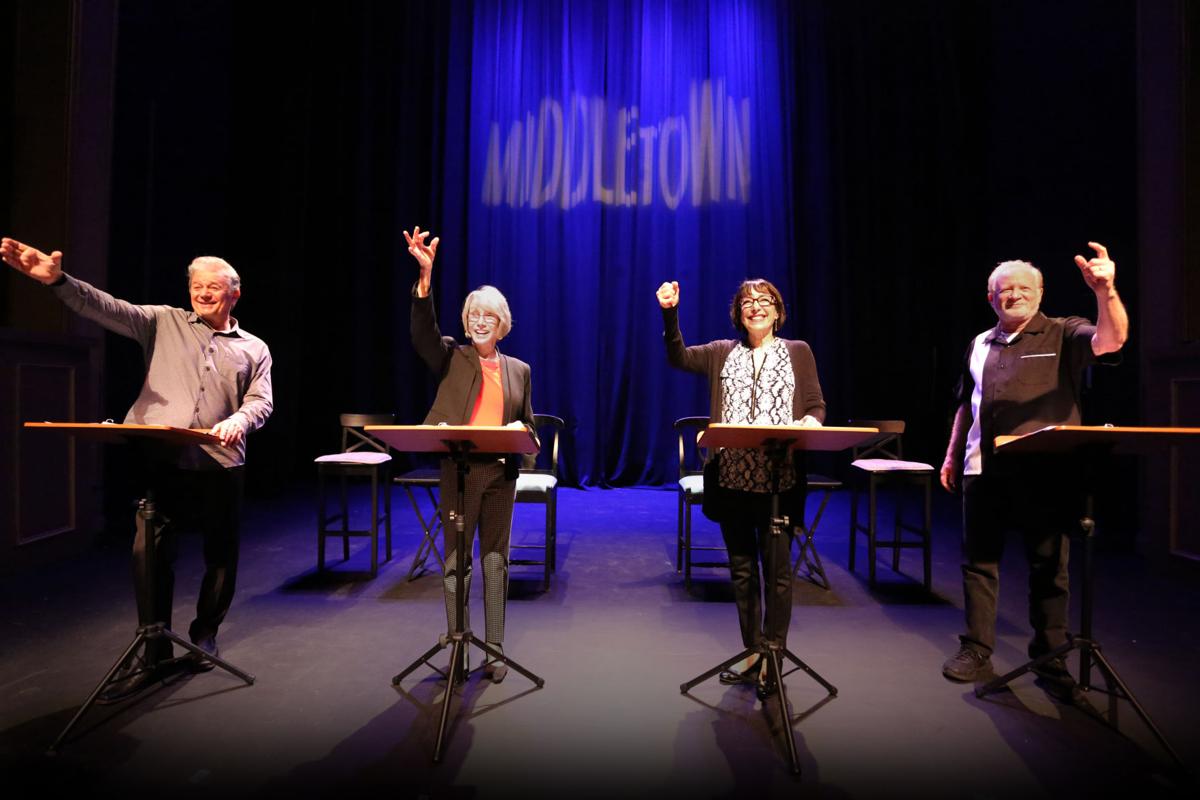 From left, Adrian Zmed, Sandy Duncan, Didi Conn and Donny Most rehearse for “Middletown” at the Strand Theatre on Tuesday. 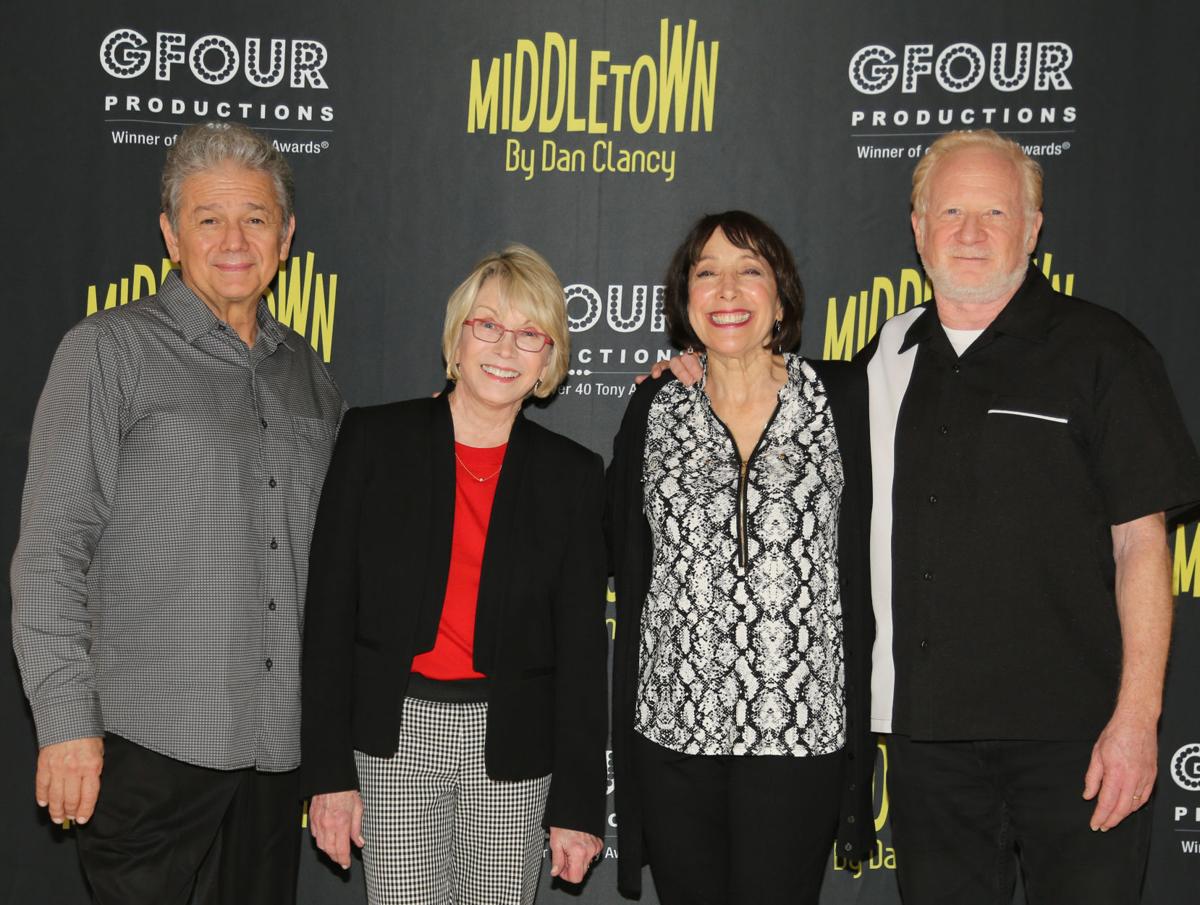 From left, Adrian Zmed, Sandy Duncan, Didi Conn and Donny Most pose for a photo during rehearsals for “Middletown.” 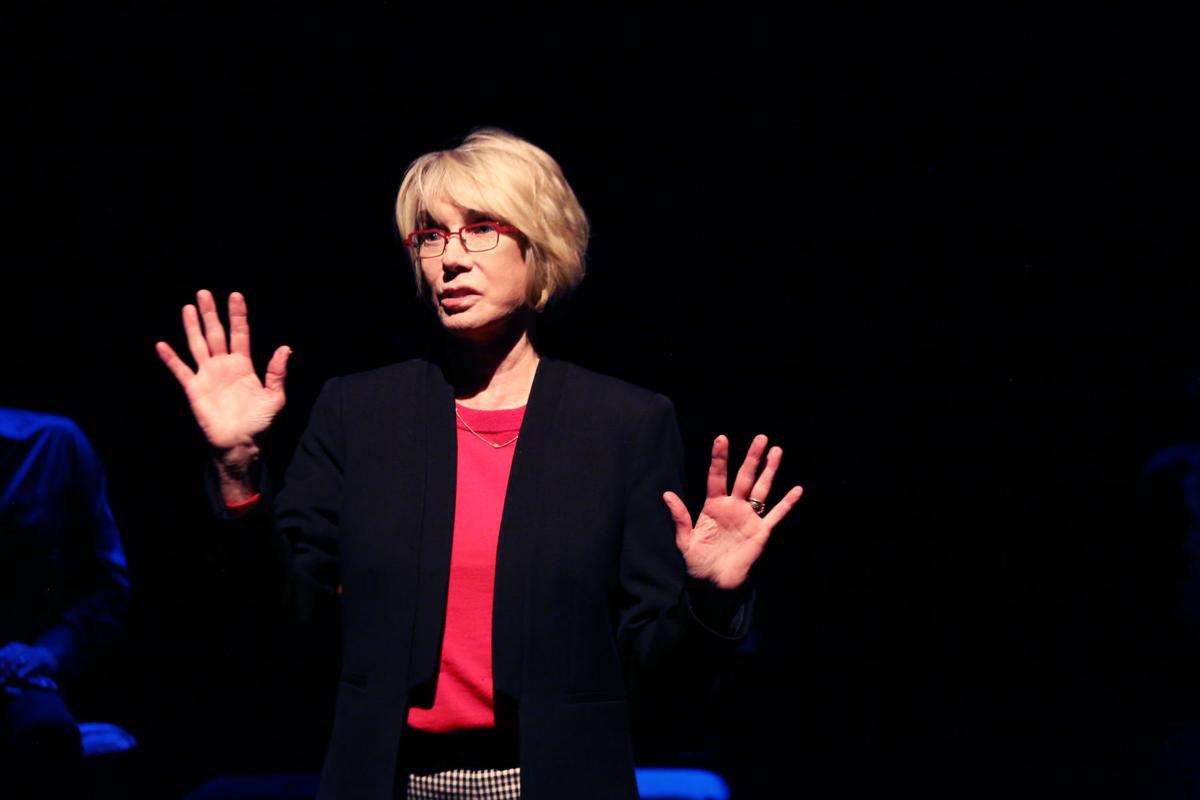 Sandy Duncan rehearses a scene from "Middletown" at the Earl and Rachel Smith Strand Theatre on Tuesday.

From left, Adrian Zmed, Sandy Duncan, Didi Conn and Donny Most rehearse for “Middletown” at the Strand Theatre on Tuesday.

From left, Adrian Zmed, Sandy Duncan, Didi Conn and Donny Most pose for a photo during rehearsals for “Middletown.”

Sandy Duncan rehearses a scene from "Middletown" at the Earl and Rachel Smith Strand Theatre on Tuesday.

Some familiar faces from TV and film are on the stage at the Earl and Rachel Smith Strand Theatre this weekend.

Donny Most (“Happy Days”), Didi Conn (“Grease”), Adrian Zmed (“TJ Hooker”) and Sandy Duncan (“The Hogan Family”) perform in “Middletown,” which runs through Sunday at the Strand. Staged without a set or props, the play tells the story of 33 years of love and friendship between two couples: Peg and Tom, and Dotty and Don.

The MDJ caught up with Most, who portrays Don, after he and his wife enjoyed lunch and a bit of shopping on Marietta Square Thursday.

MDJ: How’s your experience of Marietta been so far?

Most: It’s been lovely so far. I haven’t seen all that much of it, but, you know, where the theater is on the Square is very charming, and the people have been really, really great — very friendly and supportive — and the audience is terrific.

It’s beautiful. I love the feeling of that theater; they did a great job of restoring it and keeping that feel. I always love those older theaters, and it’s been a really nice experience performing there. The general manager, Andy (Gaines), has been great. Everybody’s been extremely nice.

Well, first of all, it’s just beautifully written — the construction of it, the dialogue, the relationships between the characters — it’s really beautifully done. It’s about two couples; we meet them at the beginning when they’re in their 60s. These are two couples that are kind of different in personalities, but they became friends, and we go back and see how the wives met each other on the first day of kindergarten for their kids and eventually introduced the husbands, and now they’ve been friends who have had dinner together every Friday night for 33 years. And it takes you through all the ups and downs with the joys and the tribulations of their marriages, having kids, all those stages and then getting older.

And because of the nature of the storytelling, the design — the playwright and director felt that this should be done not in the traditional sort of staging of a play, with the sets and props and costumes, but with a more pure kind of storytelling. So it’s kind of like “Love Letters” in that the four of us are, much of the time, reading scripts on these music stands, but then there’s a certain amount of minimal staging to get focus and for some of the transitions. And the actors are going back and forth between engaging with each other as the characters and then talking to the audience. So it’s kind of unique. But it just really works well for this piece because it gets down to the purity of storytelling — and people get pulled in. I’m surprised at the power that the play delivers.

How did you become involved with this production?

The production company got in touch with my agent last spring and asked if I would read it and consider doing one of the characters. I read the play and loved it, and then I heard some of the other actors who were going to be in it. It was the same cast as now, except Cindy Williams (“Laverne and Shirley”) was playing my wife. And Didi Conn was playing Adrian Zmed’s wife, and I’d worked with everyone at one time, so it just felt right to me. … And then it turned out that Cindy had a conflict so she couldn’t be here, and so that’s when they brought Sandy Duncan into the cast for this run.

Had you ever worked with Sandy Duncan before?

No, I’d never worked with her or even met her until about five or six days ago!

Well, what happened is she is going to be playing the role of Peg, who is married to Adrian, and Didi, who had played that role, switched over to playing my wife, because we’re going to Chicago for four weeks after this, and Sandy’s going to continue but Didi’s not available after this week. It’ll be interesting, because you’ll get different things from different actors, so it’ll change it up a little bit and keep me on my toes, I guess!

For many of us, of course, you’re best known for playing Ralph on “Happy Days.” Does your character in Middletown have anything in common with Ralph, or should audiences be prepared for a big change in you?

This character, he’s a different kind of guy. But he can be funny, too, so that’s the one thing they have in common. But he’s not the guy who thinks he’s a comedian and is always “on” like Ralph was. He’s not that kind of guy. I mean, he’s a blue-collar, down-to-earth, tell-it-like-it-is guy. No frills, no pretensions, but honesty and a good heart. But he can be funny at times and I’ve got some good lines, some very funny lines. … I was never really like Ralph in real life. So to me, that’s sort of the great joy in acting: taking on different kinds of characters — and different from myself, I usually prefer (laughs).

What’s it like doing a live performance of theater as opposed to TV?

Well, I’m used to that — I’ve done that throughout my entire career, starting pretty young. I started singing and acting and dancing when I was 13, 14 in New York — I grew up in Brooklyn — and I was performing on stage in a nightclub revue up in the Catskill Mountains when I was 15. And then I started taking more serious acting classes and did a lot of theater-oriented workshop stuff. And then, once I started “Happy Days,” I was constantly doing theater during the off-season, and did quite a bit over the years and directed some as well. So, I enjoy that very much. I enjoy both, but there is something special about a live audience, that sort of communion that you have with them. It’s very visceral, and I do love it. But I also love the challenges of working in front of the camera and shooting a movie. There’s challenges about that and there’s things that I really enjoy as well. So the best for me is being able to go back and forth between the two media.

When you’re doing the same play in different locations, do you find that the reaction of the audience is different or is it a similar experience every time?

Well, we did it last spring for a week in the Las Vegas area and then a week in Pennsylvania, and I didn’t really notice too much of a difference. The audience response has just been really strong, and then the same here. … There might have been a couple of places where we get a laugh on a line or two in a different place, but it’s hard to know whether that’s due to a different audience and locale as opposed to just the sort of serendipitous thing that happens on stage, and why one night a certain line will get a laugh and then another night it might not.

It sounds like audiences should be prepared to do a lot of laughing; is there a tear-jerking element as well?

There is a lot of comedy, but there’s also a lot of other stuff, just like life, and that’s why the play is so beautifully balanced. There’s a lot of emotional things that these characters go through, as we all do as we go through life, with all the ups and downs. It’s a bit of a roller-coaster ride. So yes, there are laughs, but it’s not just laughs, by any means.

”Middletown” performances are at 7:30 p.m. Friday through Sunday, with matinee performances at 2 p.m. Saturday and Sunday. There will be a talkback with the full cast immediately following the Friday evening performance. Tickets are on sale now at the Strand box office, by phone at 770-293-0080 or online at www.strandmarietta.org.

Woman shot to death in front of toddler daughter

The new US hope for replacing the president of Venezuela: coronavirus

What's essential? In France: pastry, wine. In US: golf, guns

AP FACT CHECK: Trump a rosy outlier on science of the virus