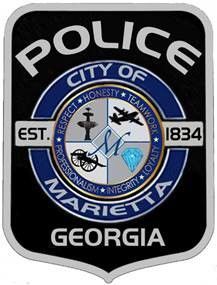 An Illinois man wanted on murder charges was arrested by Marietta police Friday after authorities say a license plate-reader flagged the car he was driving as stolen.

Leron Harris, 25, of Springfield, Illionois, was wanted by the U.S. Marshals Service in connection with a murder, according to Officer Chuck McPhilamy, spokesman for the Marietta Police Department. The details of that case were not immediately available; Harris was not included on a partial list of individuals wanted by the Marshals Service on its website Tuesday night.

According to the incident report, one of the county’s license plate readers flagged the brown Pontiac Grand Am Harris was driving as stolen just before 2 p.m. Friday.

An officer approached the car at the intersection of Franklin Road and Cobb Parkway near Dobbins Air Reserve Base, McPhilamy said.

“The vehicle didn’t initially flee but didn’t initially comply either,” he added, describing its pulling into a Quality Inn parking lot as a “slow, methodical roll,” a “telltale sign” that the occupant might have something to hide, McPhilamy said.

The officer treated it as a “felony stop,” McPhilamy continued, issuing commands from afar instead of approaching the driver. When the driver didn’t comply, the officer called for backup. He said Harris fled, but crashed only two blocks down the road.

Police found two handguns, a Glock and a Taurus, inside the Pontiac, as well as more than 150 rounds of ammunition and 15 grams of marijuana, according to the incident report. Only after Harris’ arrest did Marietta police realize he was wanted by the Marshals Service, McPhilamy said.

According to county jail records, Harris is facing nine charges, including felony counts of fleeing from police officers and possession of marijuana and weapons.

“Marietta police dept are very pleased with the outcome of this, that no one was injured and that a dangerous, armed suspect was taken into custody,” McPhilamy said. “This is one more in a series of incidents across the metro area where license plate reader technology has allowed law enforcement to proactively identify and apprehend suspects, safely.”

Stocks rise, pushing the S&P 500 closer to its record high

Why choice of running mate matters more than usual this year

States on hook for billions under Trump's unemployment plan