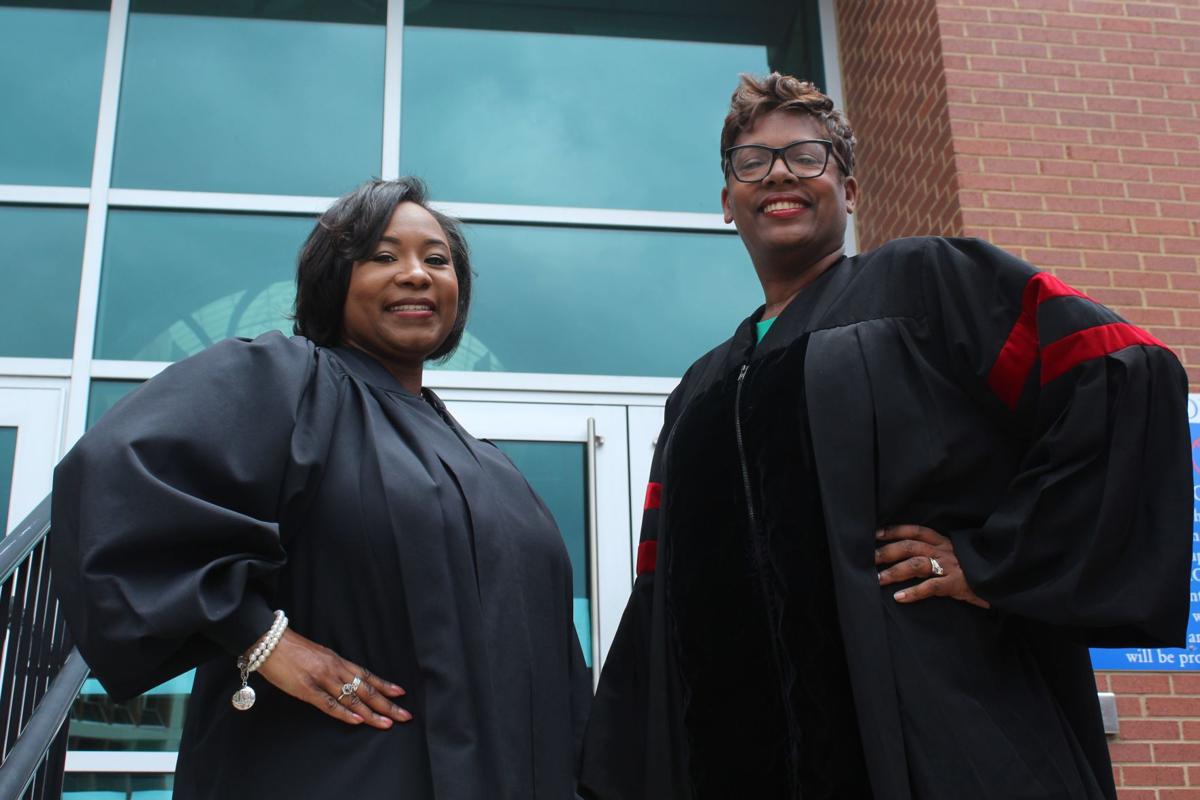 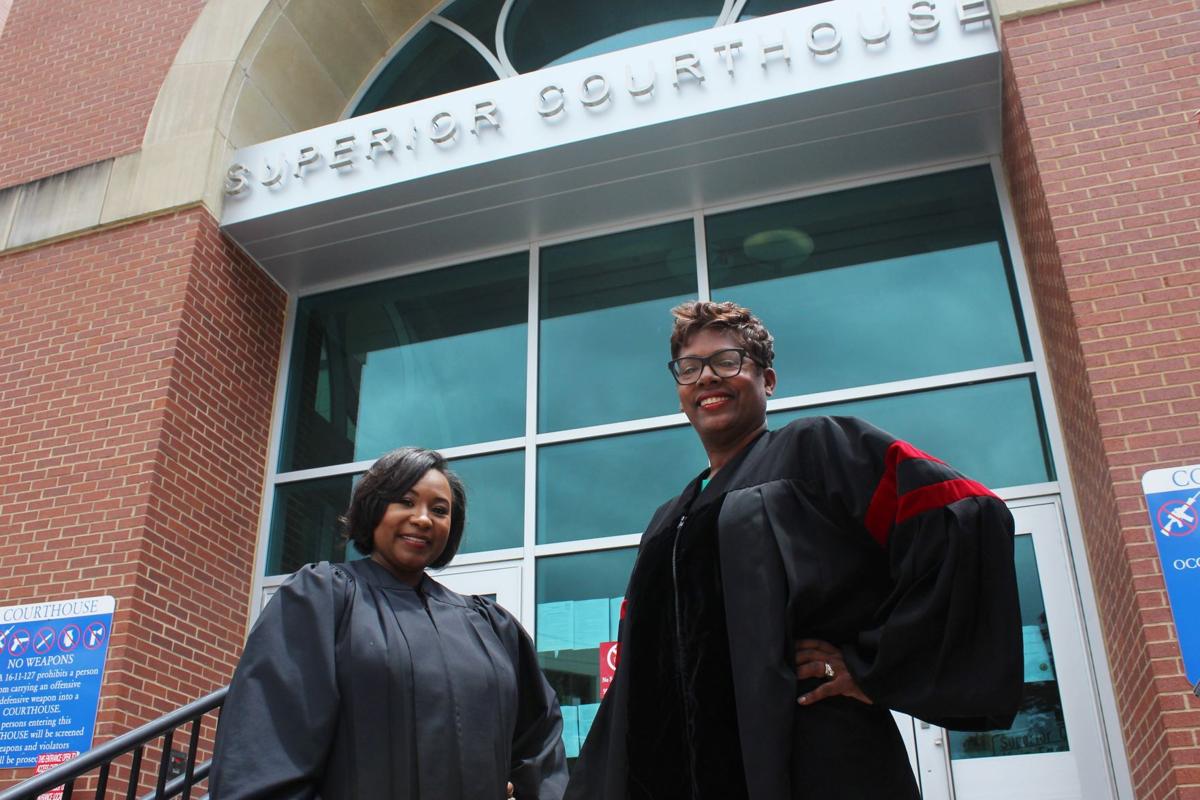 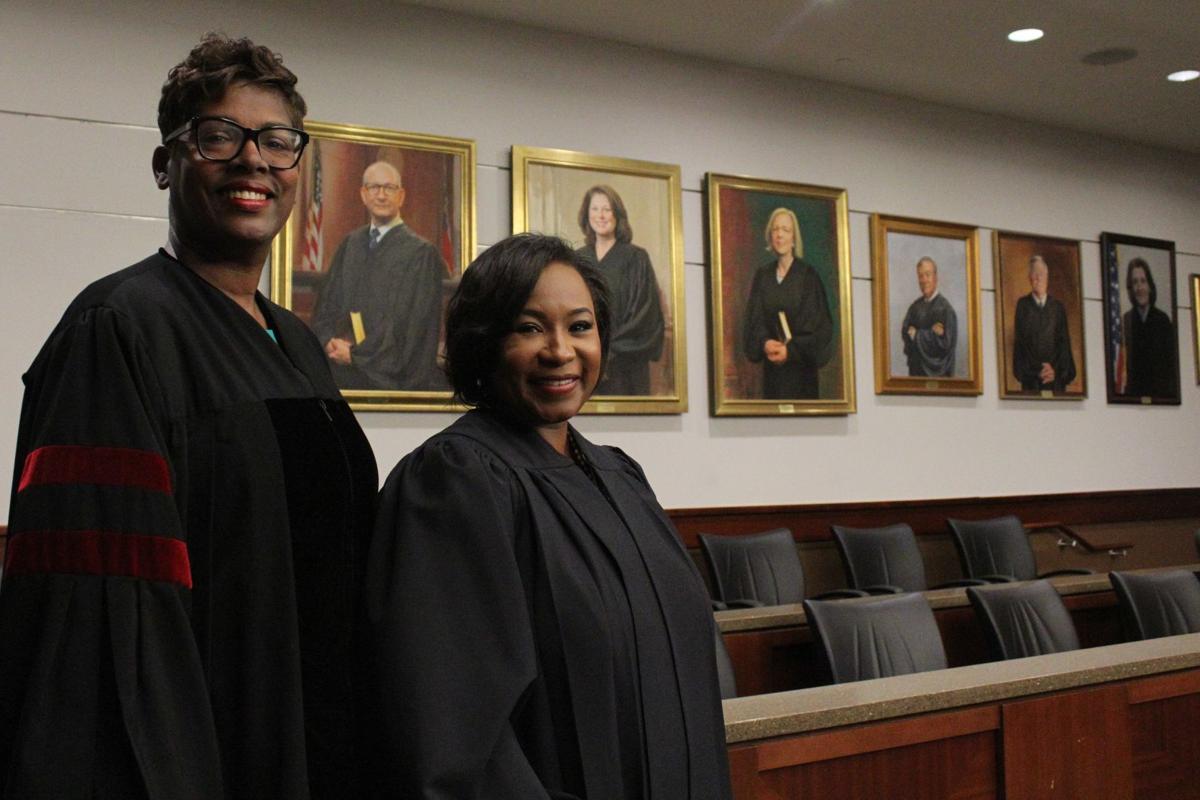 From left: Judge Angela Brown and Judge Kellie Hill stand in front of portraits of past and present Cobb County Superior Court judges. 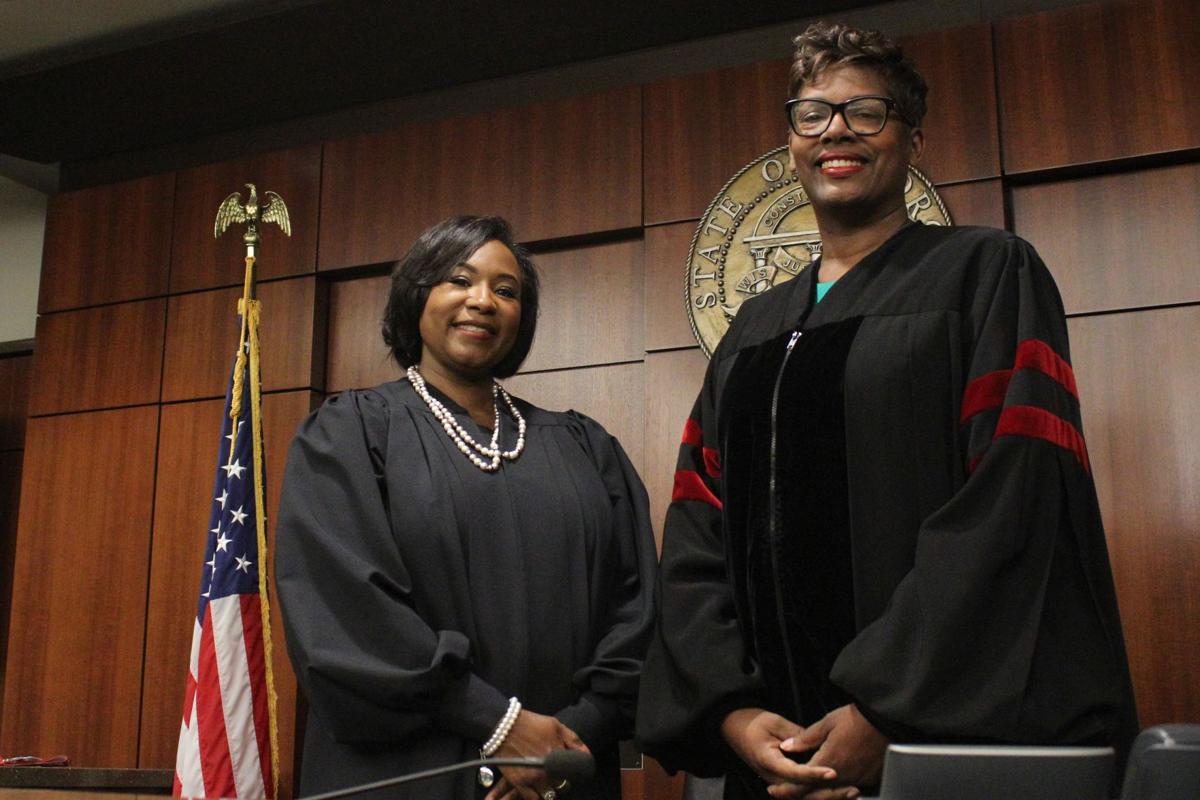 Judge Kellie Hill, left, and Judge Angela Brown, right, pose for a photo in the ceremonial courtroom in the Cobb County Superior Court.

From left: Judge Angela Brown and Judge Kellie Hill stand in front of portraits of past and present Cobb County Superior Court judges.

Judge Kellie Hill, left, and Judge Angela Brown, right, pose for a photo in the ceremonial courtroom in the Cobb County Superior Court.

MARIETTA — Cobb County voters have made history by electing not one, but two of the first Black judges to the county’s Superior Court.

Both judges, Angela Brown and Kellie Hill, serve as appointed Cobb County Magistrate Court judges. In the June 9 election, Brown was elected over the incumbent, Chief Judge Reuben Green, with about 58% of the vote. Hill succeeds retiring Judge Lark Ingram and defeated Daniele Johnson with 63% of the vote.

Their transition to join the eight other judges on the Superior Court will become effective midnight Jan. 1, and they will be officially sworn in at an undetermined date.

Senior judges welcome Brown and Hill to the bench

Superior Court Judge Stephen Schuster said the elections of Brown and Hill are an “historic moment for the judiciary and Cobb County as a whole,” adding that the bench and the county’s bar association has been working for decades to promote diversity in the legal community.

”They will both be welcome additions to our bench. They will both be ready to serve from day one,” Schuster said of Brown and Hill. “They have joined our judicial family and will be welcomed by us fully and unconditionally. We look forward to serving with them for many years to come.”

”I am proud to see this day and consider it a turning point for the Superior Court and the people of Cobb County,” he said. “While I cannot possibly know what it may be like to stand before a judge and hope that he or she will do justice in my case, I know that in order for people to have confidence in a system of justice, it must be representative and inclusive. I have always had faith in my colleagues to do justice and fairness, but we could not change the appearance of the court for anyone who might feel outside the system. I hope this change in our court inspires confidence and makes the system even better than before.”

”They’re two very fine women, and very fine attorneys, and they’ve had judicial experience. I think they’re going to be great additions to our bench,” she said. “We’re looking forward to having them.”

Brown was born in Philadelphia and grew up the daughter of a Tuskegee Airman and a schoolteacher. She said during her campaign that her parents instilled in her a sense of integrity that would later serve her as a judge. Her influences, she previously told the MDJ, include Supreme Court justices Thurgood Marshall and Ruth Bader Ginsburg for their commitment to equal justice for women and people of color.

Brown started her career at Davis Wright Tremaine in Seattle, and went on to work as a prosecutor in Kings County, Washington.

She recalled that after working in civil and environmental litigation in New Jersey, she was hired by mining and refining giant ASARCO as an in-house counsel in New York, and was the firm’s first African American attorney there, responsible for environmental legal management from Mississippi to the Pacific.

“It was mind-boggling to me that after all of those years I was the first (African American) lawyer there,” she said. “I felt I had to be the best I could be, and I had to do the job the best that I could do it, because I represented progress.”

She went back to prosecuting in New Jersey before she moved to Georgia and worked in Cobb County, where she was the first Black woman to work as an assistant district attorney, she said.

It was one of her criminal cases in Fulton County, she said, that inspired Brown to become a judge. Her client had made a “grave mistake,” she said, but the way the judge handled his case made all the difference.

“He still went to prison, but he said, ‘Wow, that’s the first time a judge listened to me and did something for me,’” she said. “I realized that this person actually listened to him, and the interaction she had with him was amazing.”

As a Superior Court judge, Brown’s priority will be to make sure everyone feels their case has been heard in court, she said.

Brown is excited to start in her new role.

“I’m a person of faith, and I believe this is a God-given opportunity, so I intend to walk boldly in it. I’m well-prepared for it and I’m ready,” she said. “It’s so exciting, and yet at the same time you understand the gravity.”

For Hill, being an elected judge is the realization of a lifelong dream. She grew up in Jersey City, N.J., where as a teenager she met Judge Shirley Tolentino, who was the first African American woman to serve on one of her local judicial benches, Hill said.

“I knew eventually that I wanted to be a judge as a 13-year-old, and that seed was planted,” she said.

Shortly after law school, Hill moved to Georgia, where she hadn’t yet passed the state bar exam, so she interviewed for jobs but didn’t get offers at first.

Hill took odd jobs and worked at a marketing research firm where she found an opening at a small law firm — as a receptionist. She took the receptionist job at Robinson, Bethel and Dixon, P.C. in Atlanta, was quickly promoted to be a legal assistant and when she passed the bar, became an attorney there.

“The vision I had was completely different from the reality of my career. I never thought I would be a trial lawyer in a million years. I thought I would do corporate work,” she said. “It was actually (DeKalb County Magistrate Court Judge Winston Bethel) who saw something that I didn’t see within myself and thought I would be very good as a trial litigator.”

Hill worked in the DeKalb County solicitor’s office and then was an assistant district attorney for Fulton County, where she was the lead prosecutor for multiple high-profile cases, including the Fulton courthouse shootings of 2005. In that case, Brian Nichols was convicted of 54 counts, including four murder charges.

She went back to DeKalb to the district attorney’s office before returning to civil practice, and she started her own firm that also worked with personal injury, divorce and some criminal defense. She also trained with police officers on officer-involved shootings, she said.

In 2016, when a Cobb State Court seat was open, Hill made her first bid for public office, beating three candidates to a runoff before losing to John Morgan.

As a Superior Court judge, Hill plans to create a mentoring program for youth who have criminal charges. Small groups could hear from speakers discussing issues relevant to the age group, she said, and youth could connect with professionals and get job skills training.

Hill also hopes to restore some faith in the justice system. She said the current bench is made up of good judges, but with herself and Brown it will look a little more like the community they serve.

“I want to make sure, No. 1, whatever role I play helps restore some of the faith that people have in the justice system. Because race has been such an issue that is currently in the forefront of society, it has unfortunately been a means for our communities to divide themselves and lose faith in our law enforcement, our judicial system, in society as a whole, it seems,” she said. “I just believe by having a Superior Court that looks a little more like the Cobb County community, it would hopefully bring a little more credibility to the courts from the perspective of our citizens.”

Postal Service warns states across US about mail voting