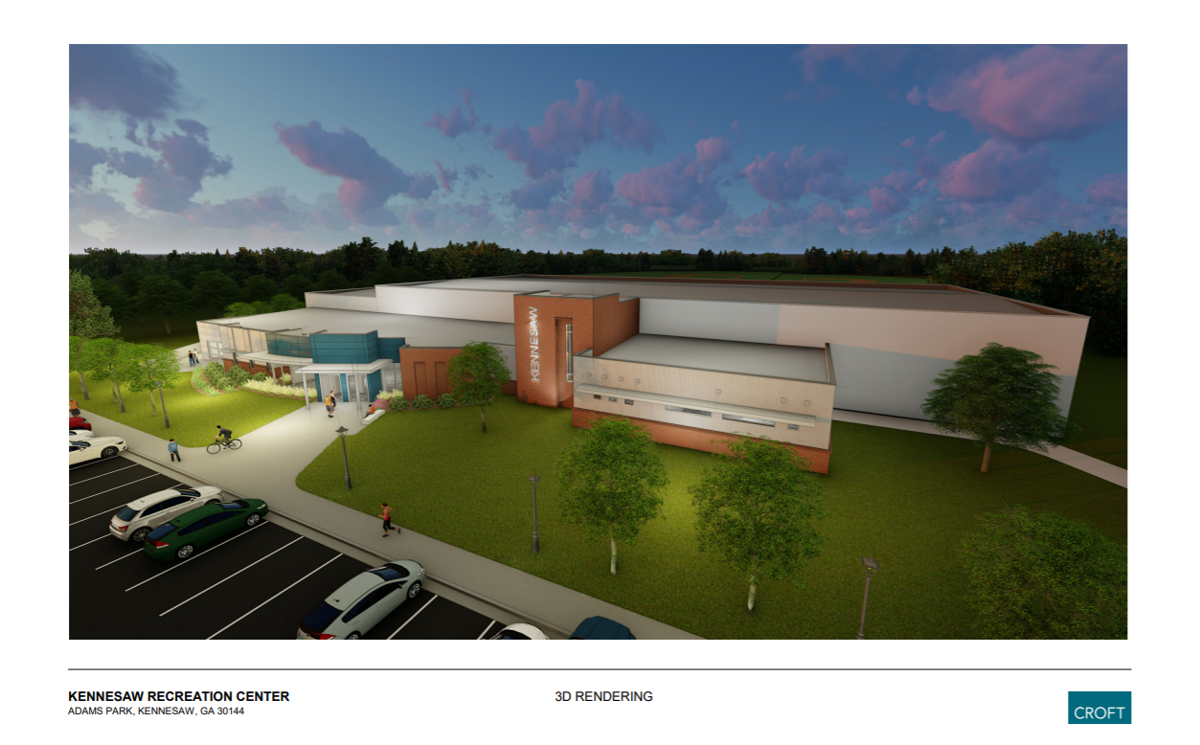 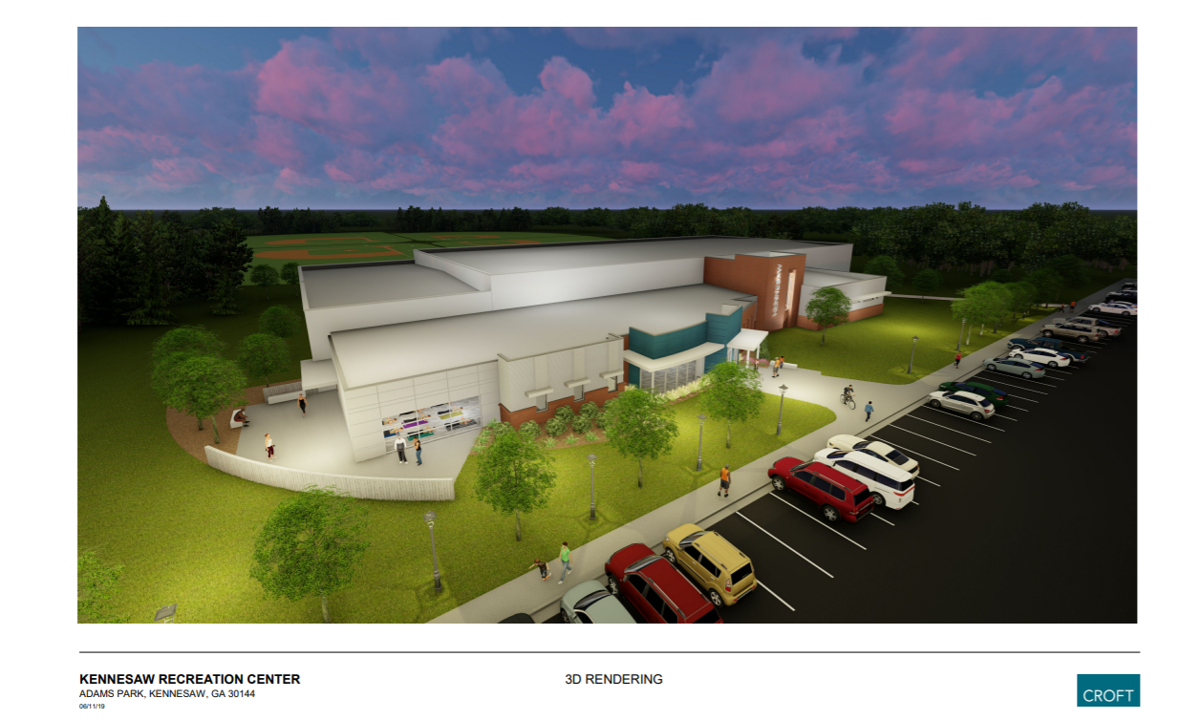 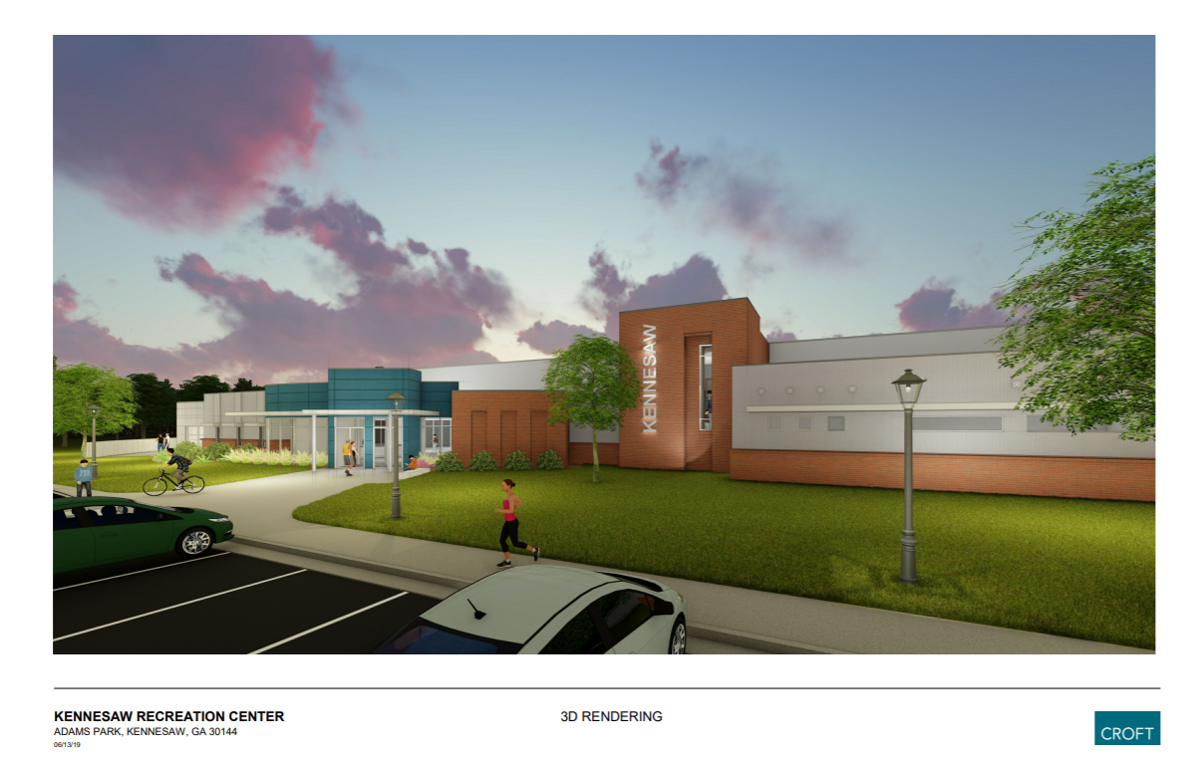 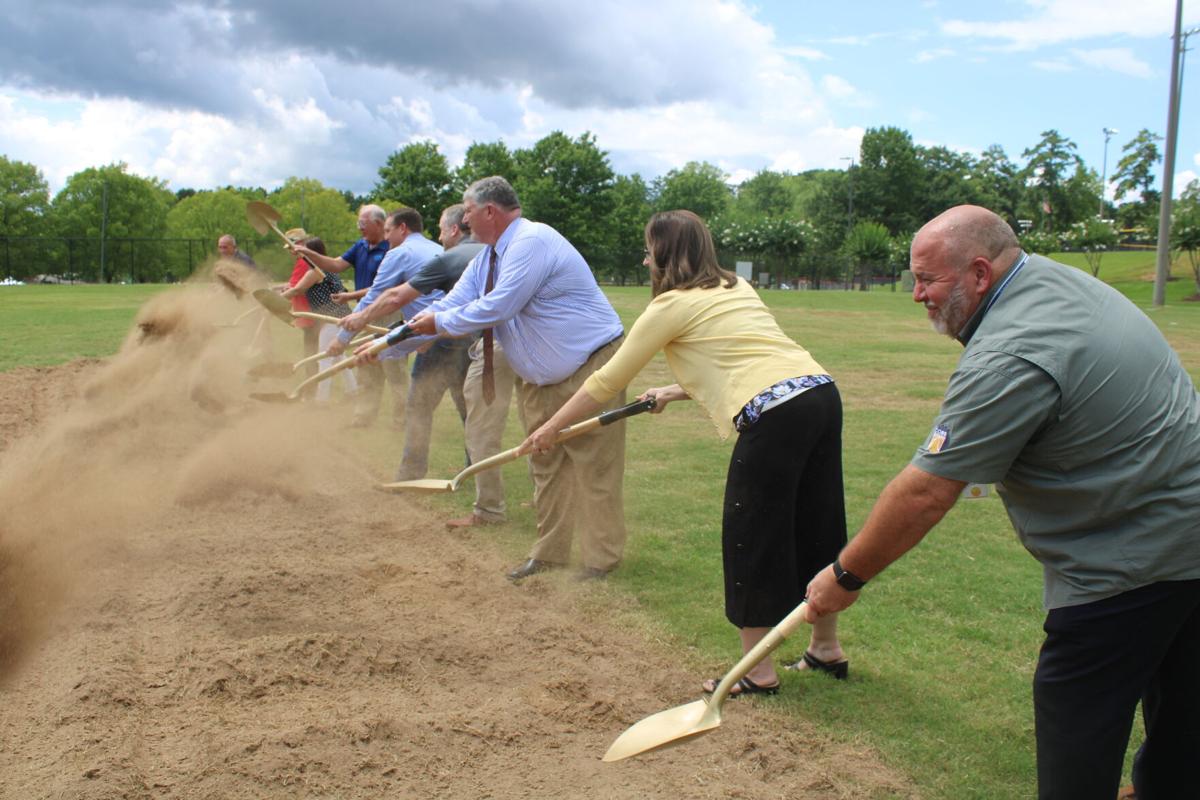 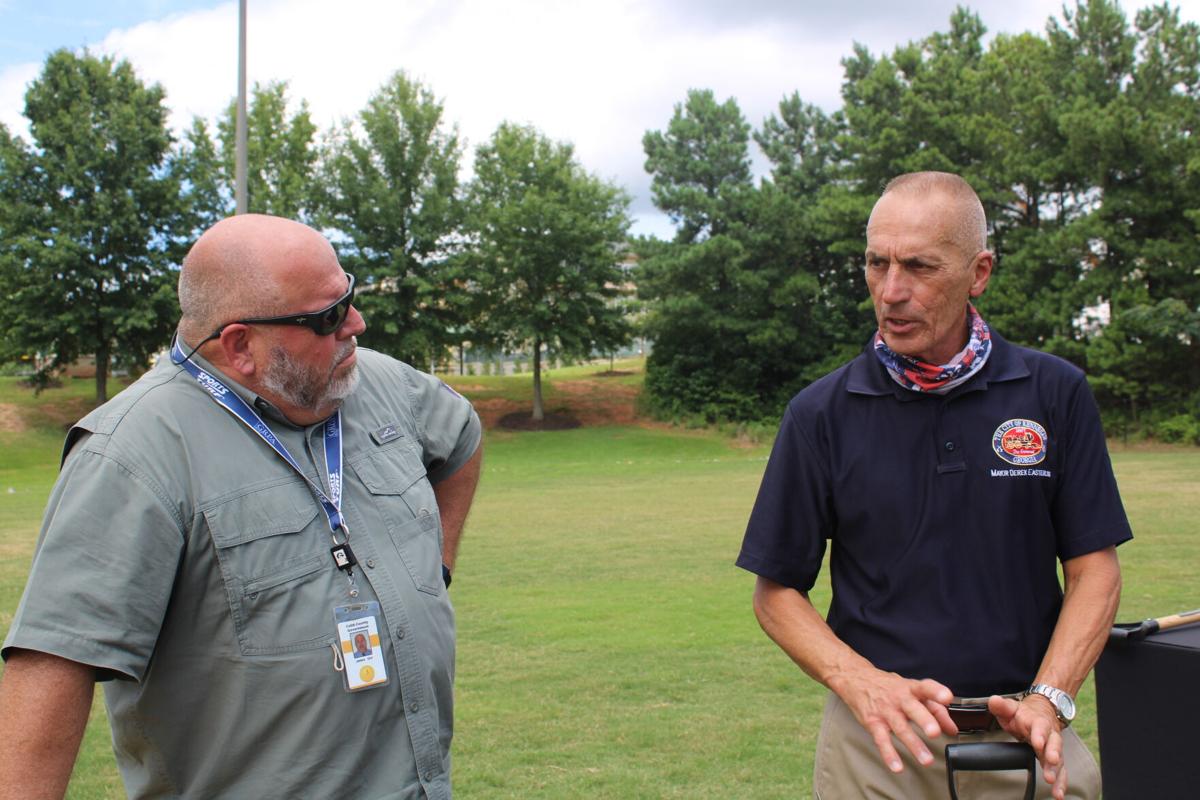 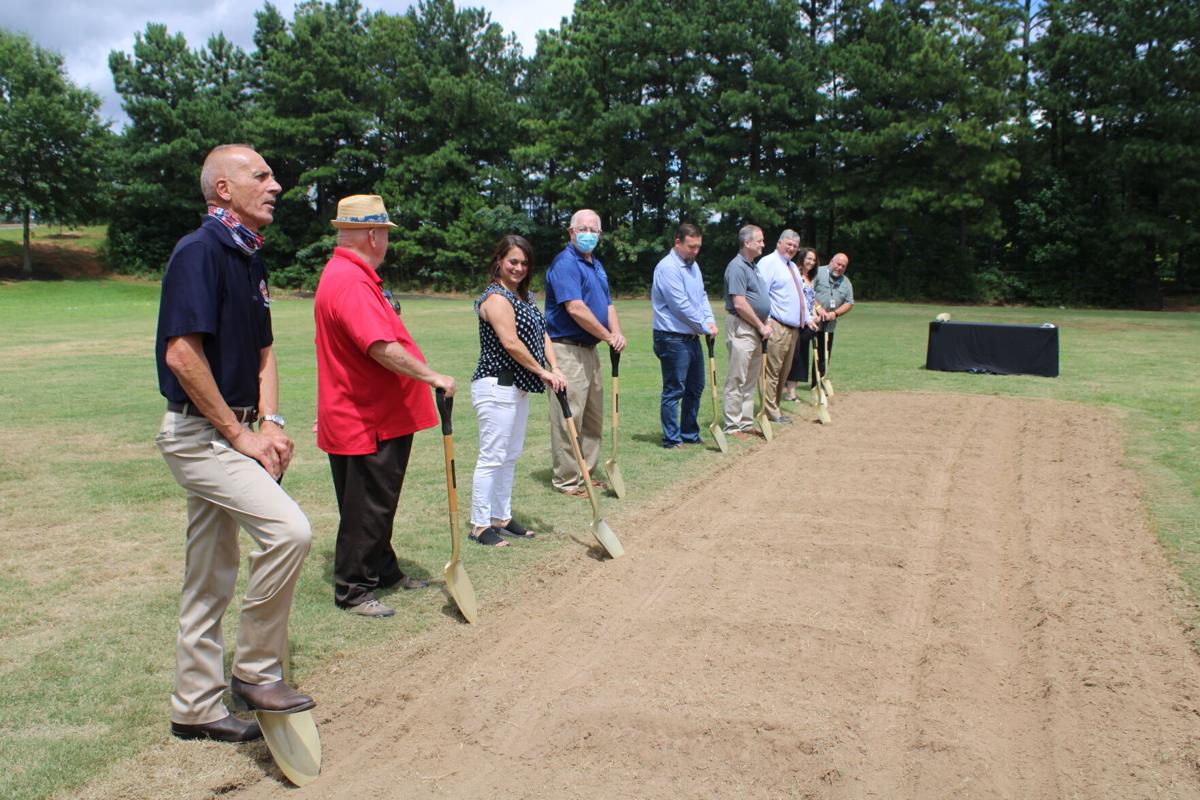 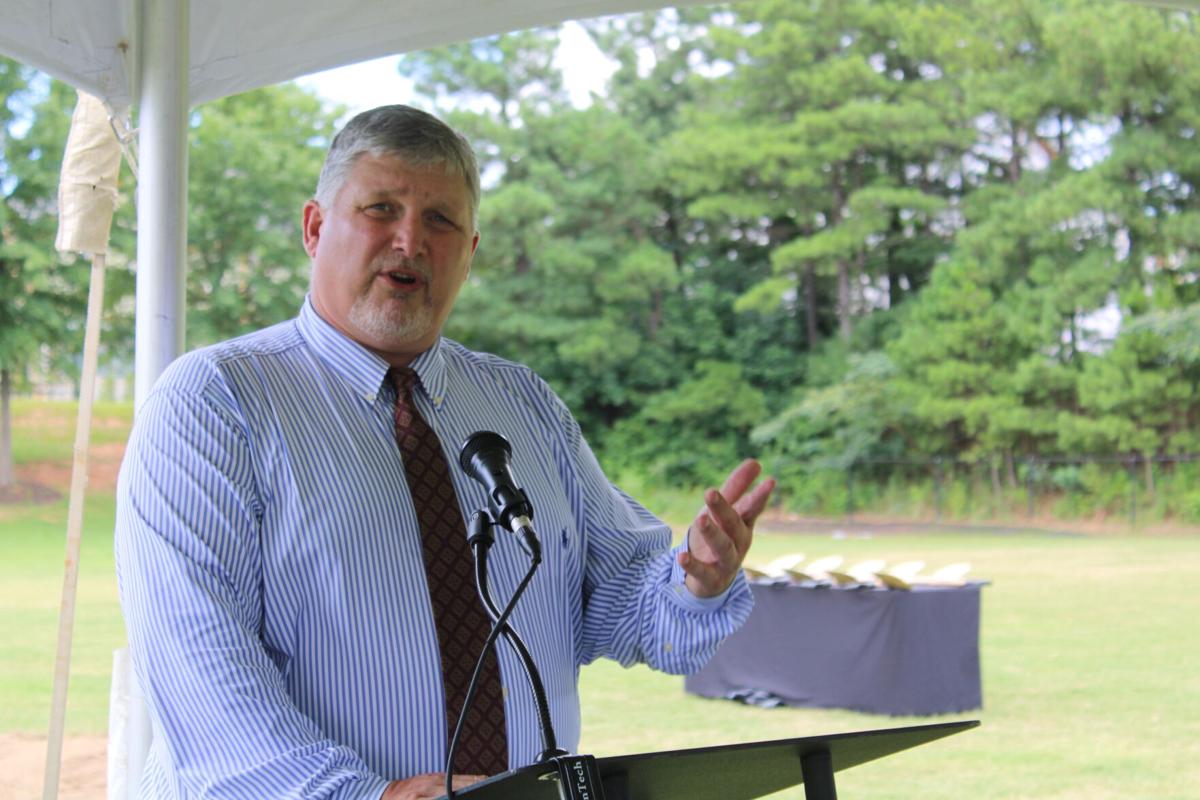 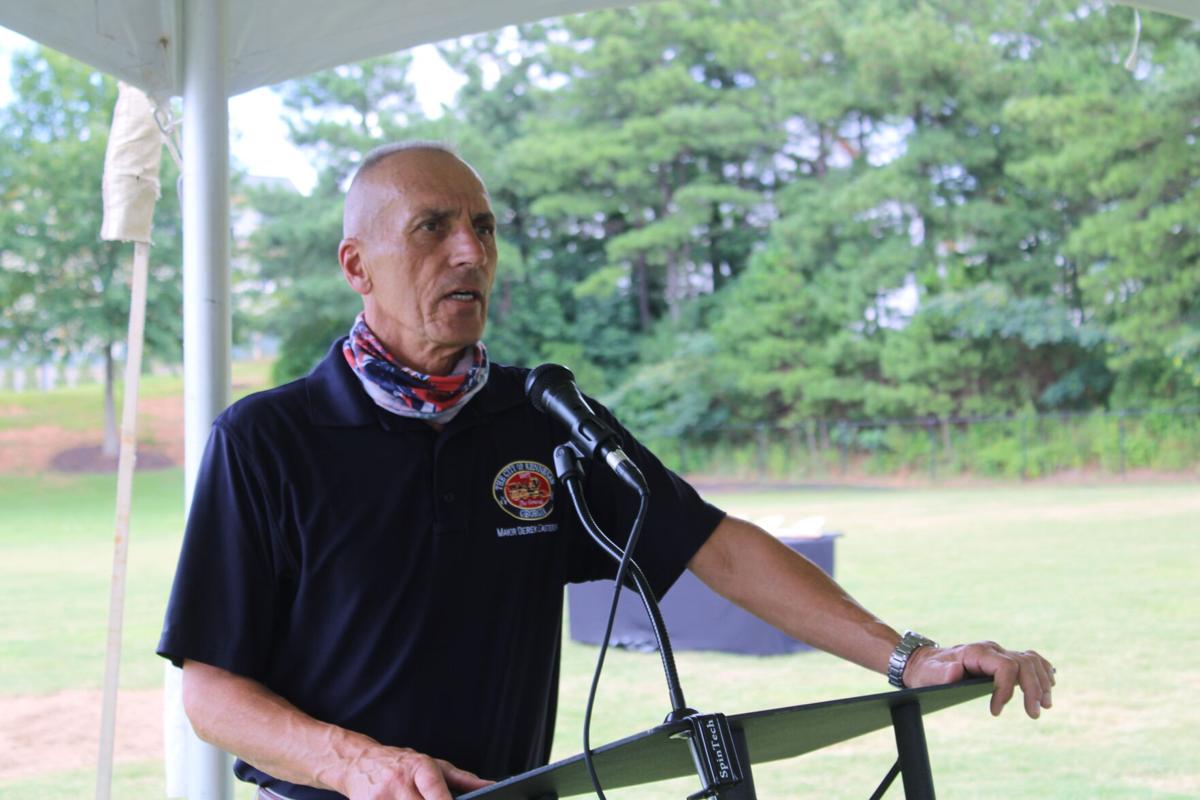 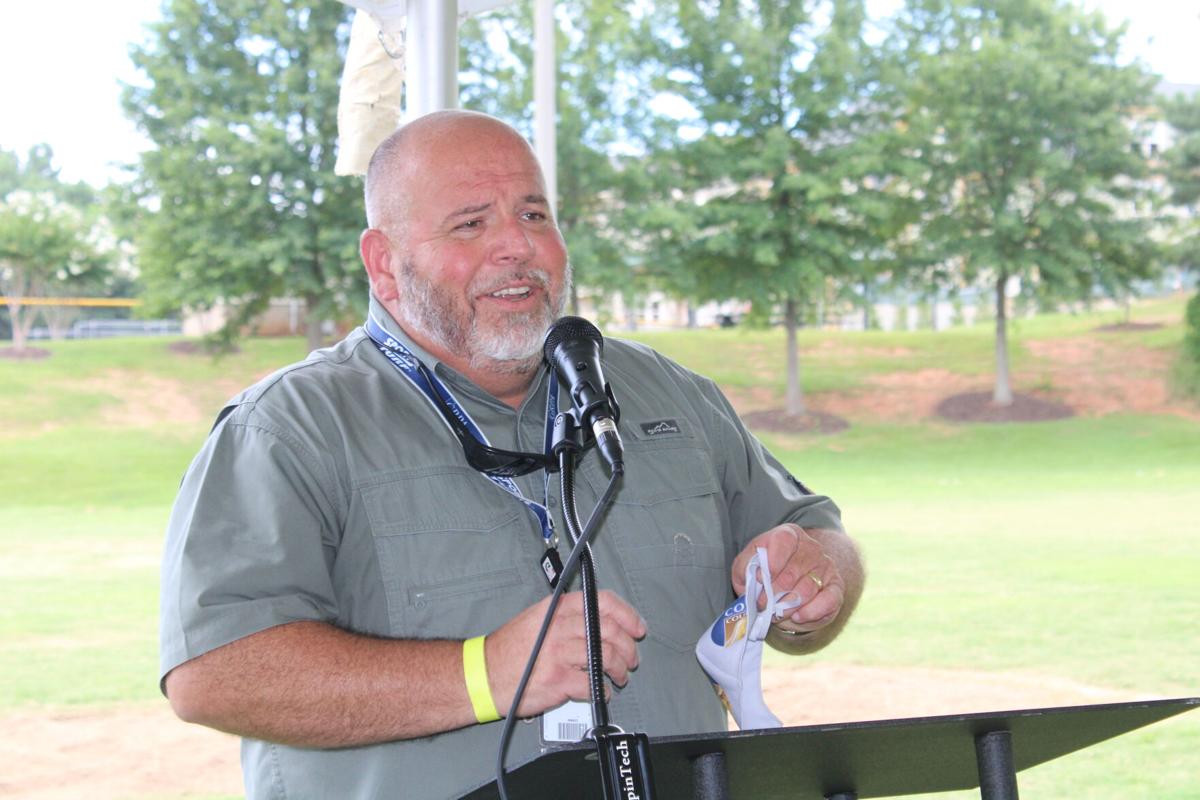 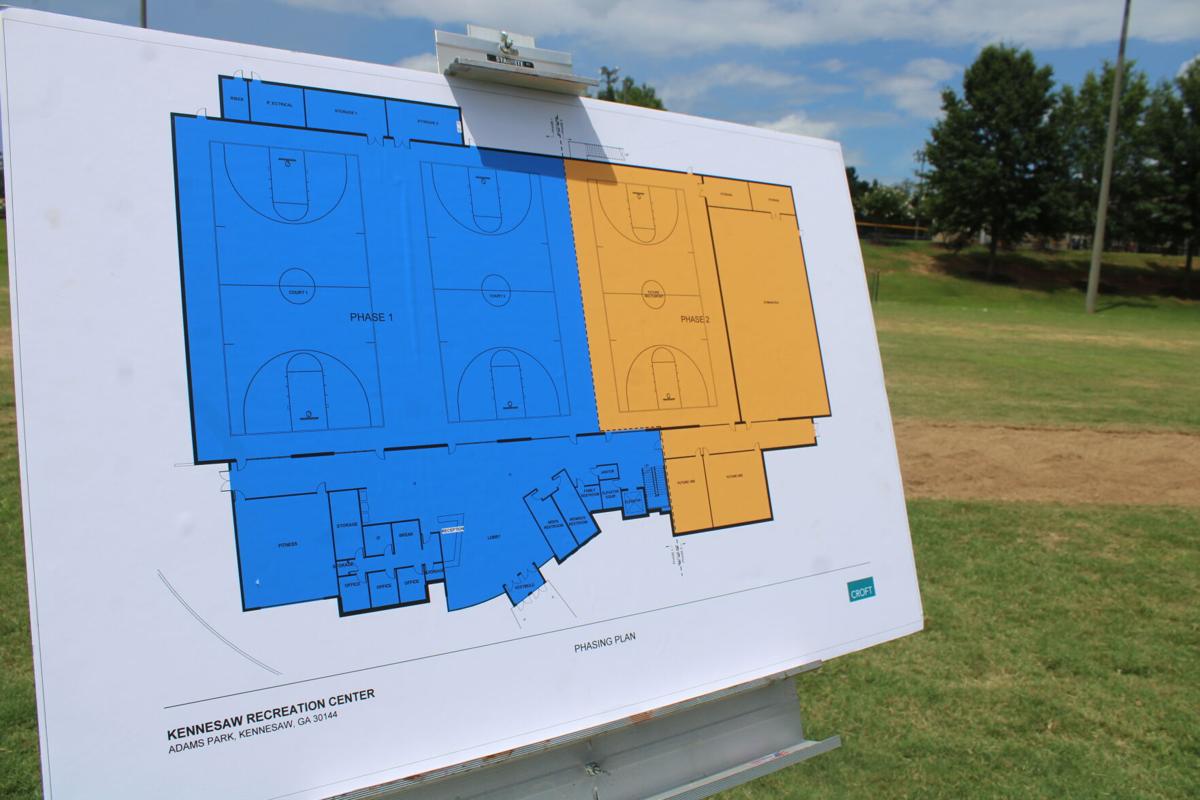 A floorplan for the new recreation center on display at the groundbreaking on Wednesday, July 29. 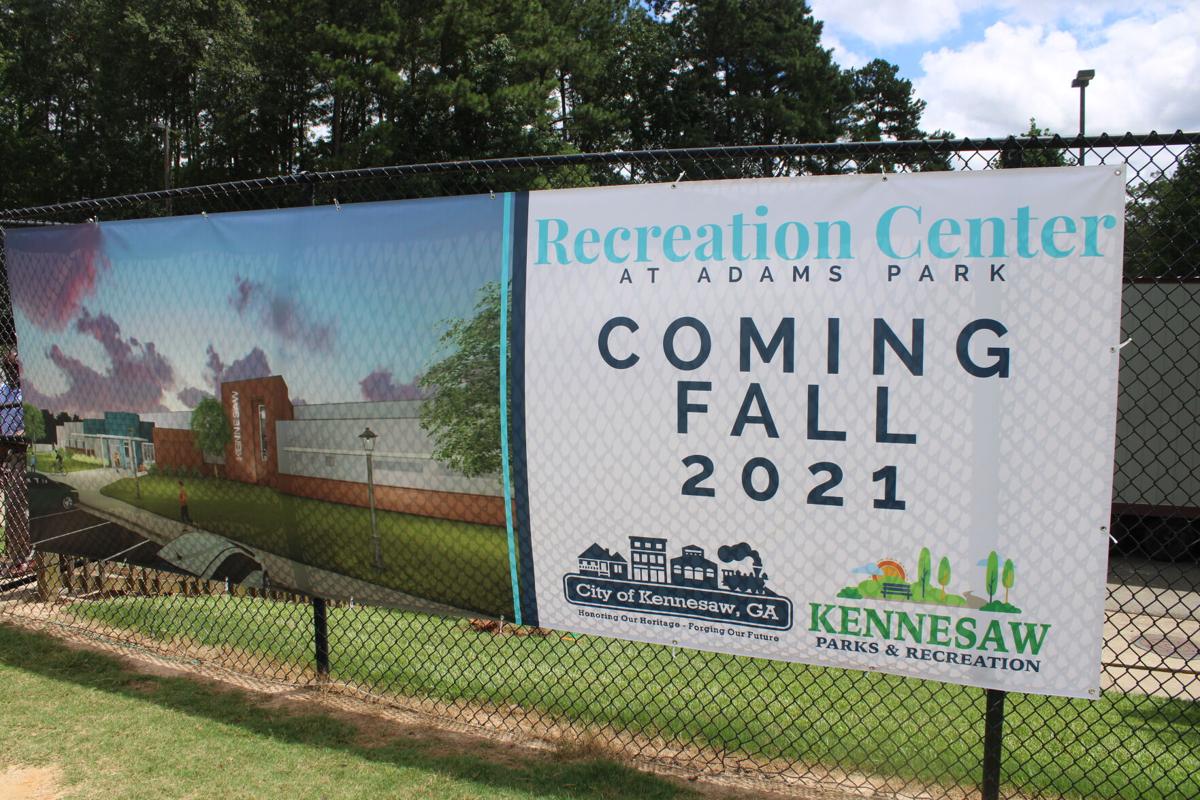 A sign for the new recreation center at the groundbreaking on Wednesday, July 29. 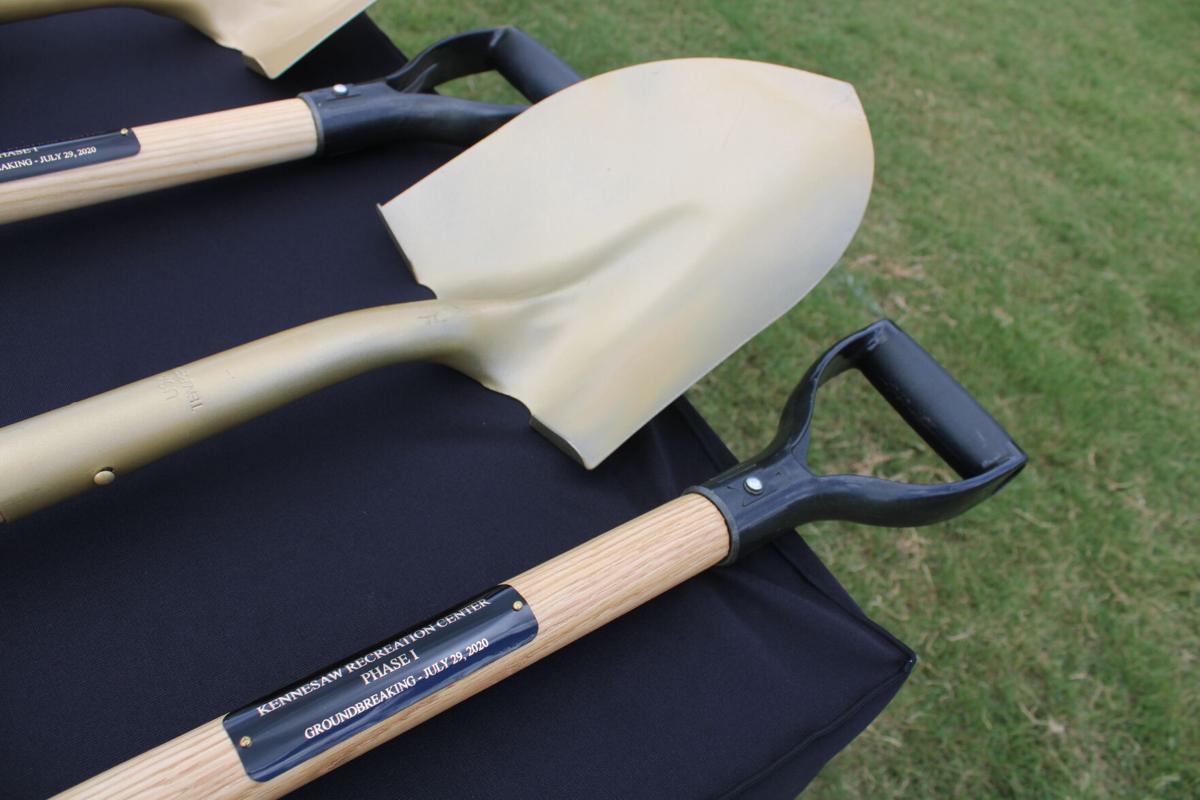 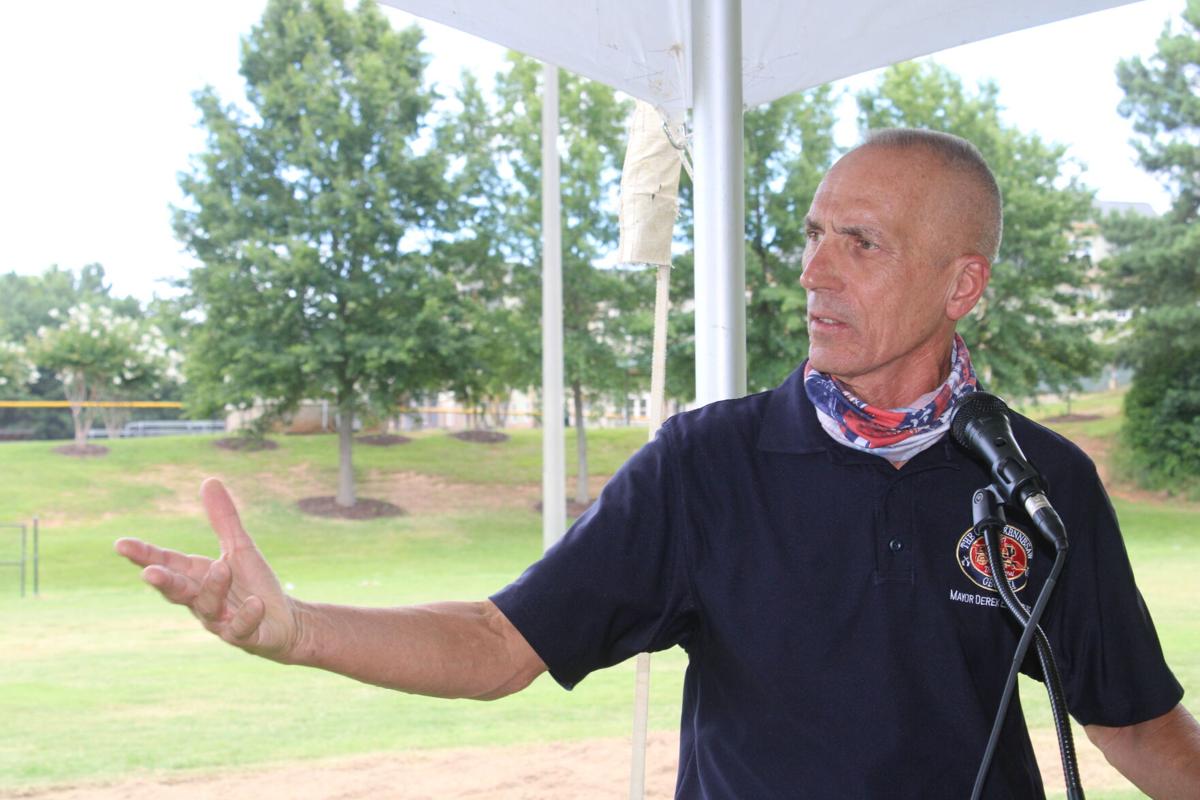 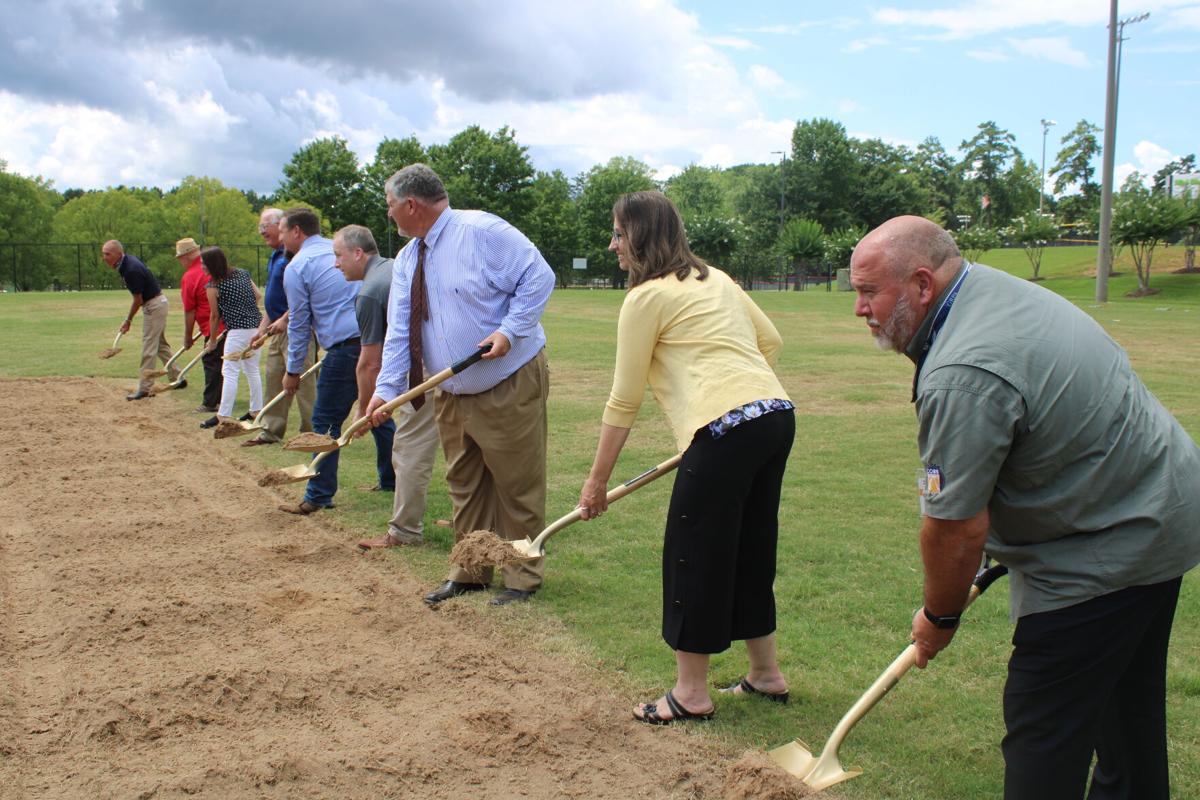 A floorplan for the new recreation center on display at the groundbreaking on Wednesday, July 29.

A sign for the new recreation center at the groundbreaking on Wednesday, July 29.

KENNESAW — Digging golden shovels into a strip of loose dirt, Kennesaw Mayor Derek Easterling and nine other local officials broke ground on a new recreation center at Adams Park on Wednesday afternoon, kicking off the yearlong construction of the new athletic facility.

The approximately $11 million center, which will be built in two phases, is funded by the special purpose local option sales tax. During phase one of construction, scheduled to be completed within 13 months, the city will build a 25,000-square-foot facility with two basketball courts, a fitness room and office space. Phase two, adding another 17,000 square feet to the center, will feature a third basketball court, gymnastics space and meeting space.

“I want to make sure that I thank the citizens of Kennesaw and Cobb County for voting yes on the 2016 SPLOST,” said Kennesaw Parks and Recreation Director Steve Roberts. “Without SPLOST dollars, it would be impossible for us to build these types of buildings that affect and benefit so many people. Adding the recreation center to our city amenities will be a blessing to this community.”

Adams Park, a 33-acre community park located at the intersection of Watts Drive and Cobb Parkway, currently has six baseball fields, four softball fields, a soccer field, two tennis courts, and other amenities like picnic pavilions and shelters. Roberts said the addition of the recreation center will allow his department to host new sports, expand summer camps and start an after-school program.

“The building will allow our department to grow and serve a larger number of people in this city,” Roberts said.

Easterling thanked Cobb County officials for their support in planning the new center. He said the city is providing something citizens have asked for.

“When it’s all said and done, a little over $11 million is going to be spent on this facility that’s going to benefit everybody,” Easterling said. “The biggest word I want you to take away from this, and everything else the city of Kennesaw has done, is ‘opportunity.’ Opportunity abounds in Kennesaw.”

Cobb County Parks Director Jimmy Gisi said local parks and recreation departments play a huge role in crafting memories for young people, and the city of Kennesaw should be excited about this recreation center.

“I know Steven (Roberts) and his staff will do a great job with it,” Gisi said. “I’m really excited, and I can’t wait to be back for the ribbon-cutting here in just a little while.”

About 45 people gathered for Wednesday’s groundbreaking, and the city streamed the event live on its Facebook page.

After Kennesaw city council members delivered remarks, Easterling called on officials, including Gisi and Cobb Commissioner Keli Gambrill, to pick up their shovels and “throw some dirt.”

Q&A: What's up with Trump's orders on TikTok and WeChat?

In power for a year, Puerto Rico leader fights for job at polls

US hiring slows amid signs of longer-lasting economic damage

'Stockton on My Mind' shows mayor's hopes for ailing city