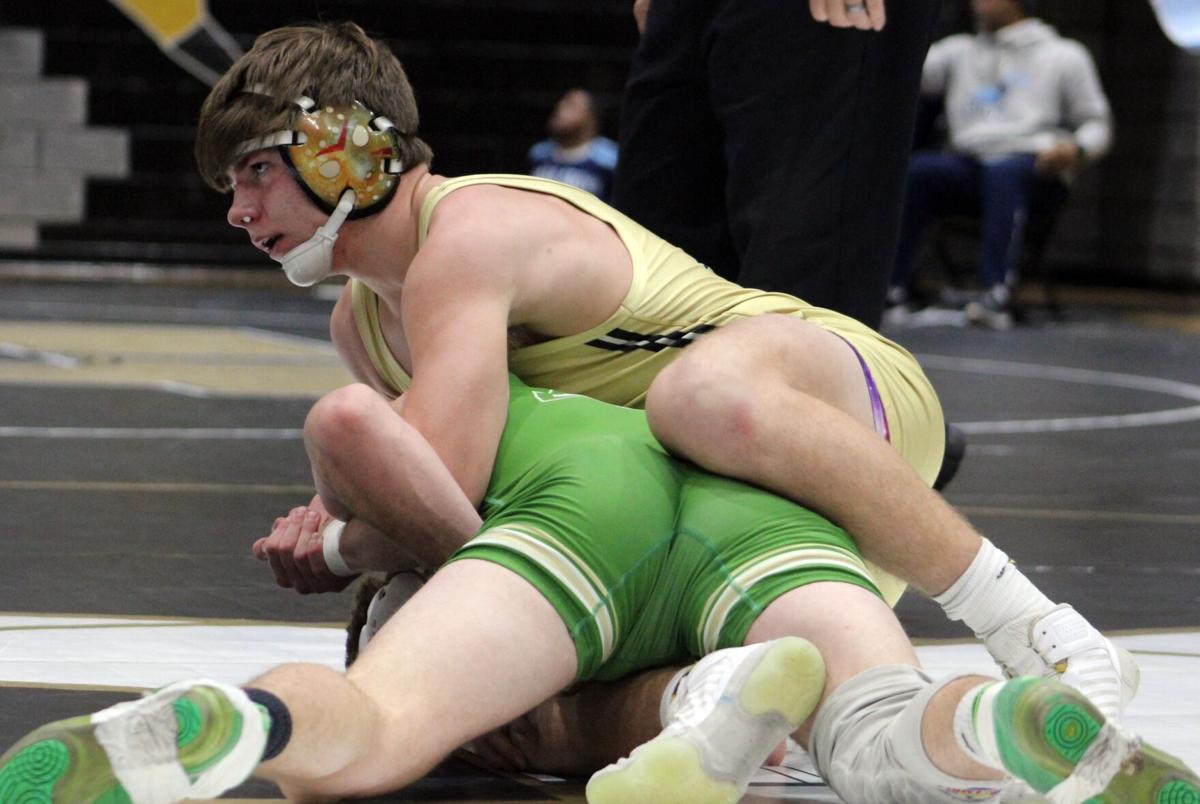 Rockmart’s Dalvin Millhollan (top) wrestles Adairsville’s Westin Porter for the 160-pound title at the Area 4-3A tournament Friday, Feb. 5, at Rockmart High School. Millhollan was one of eight Jackets to win their weight class at the event. 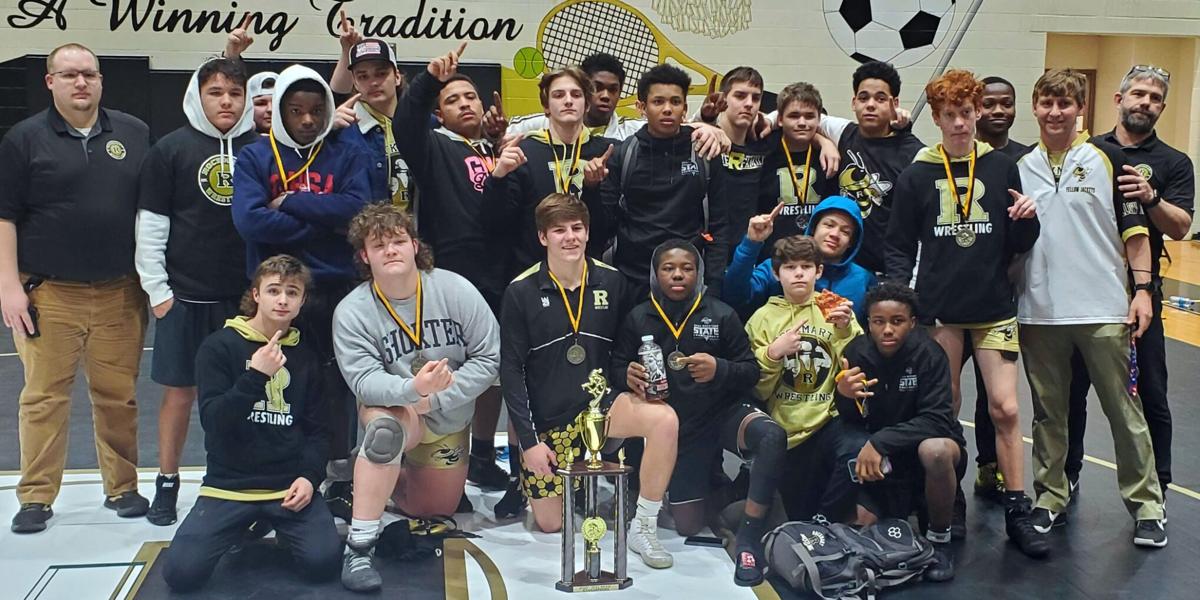 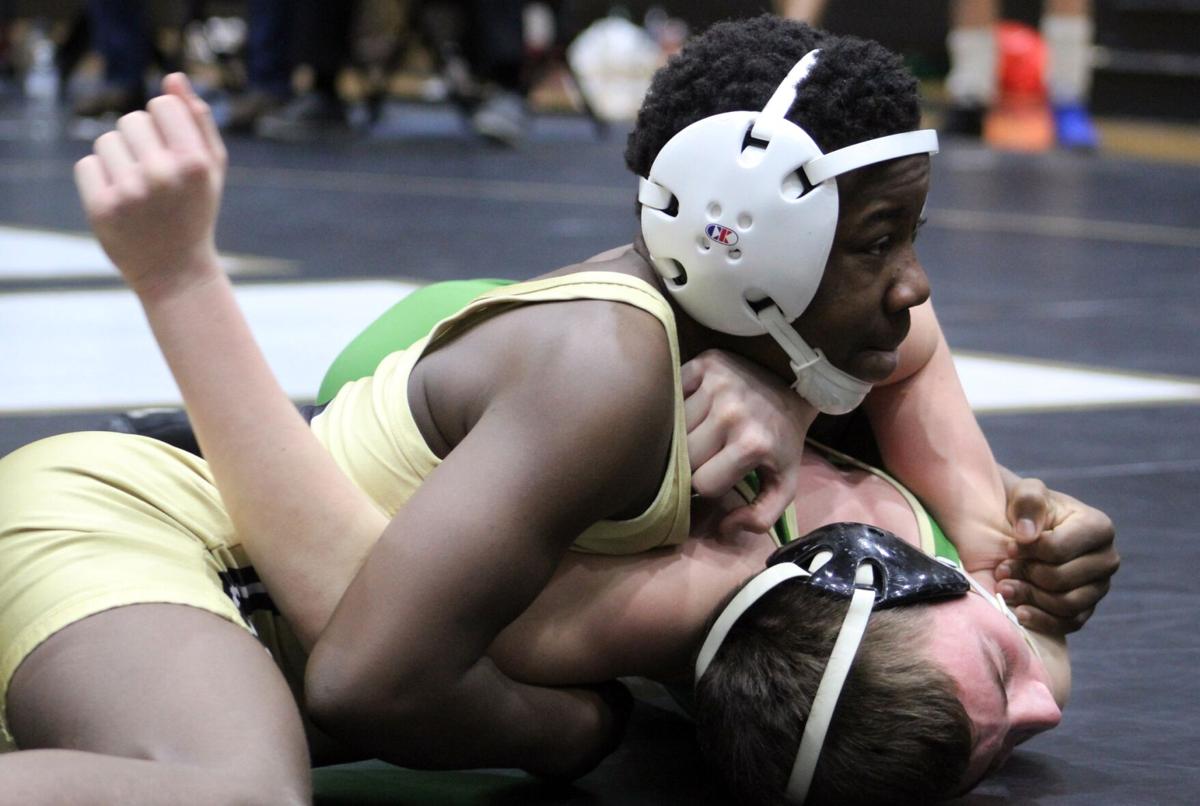 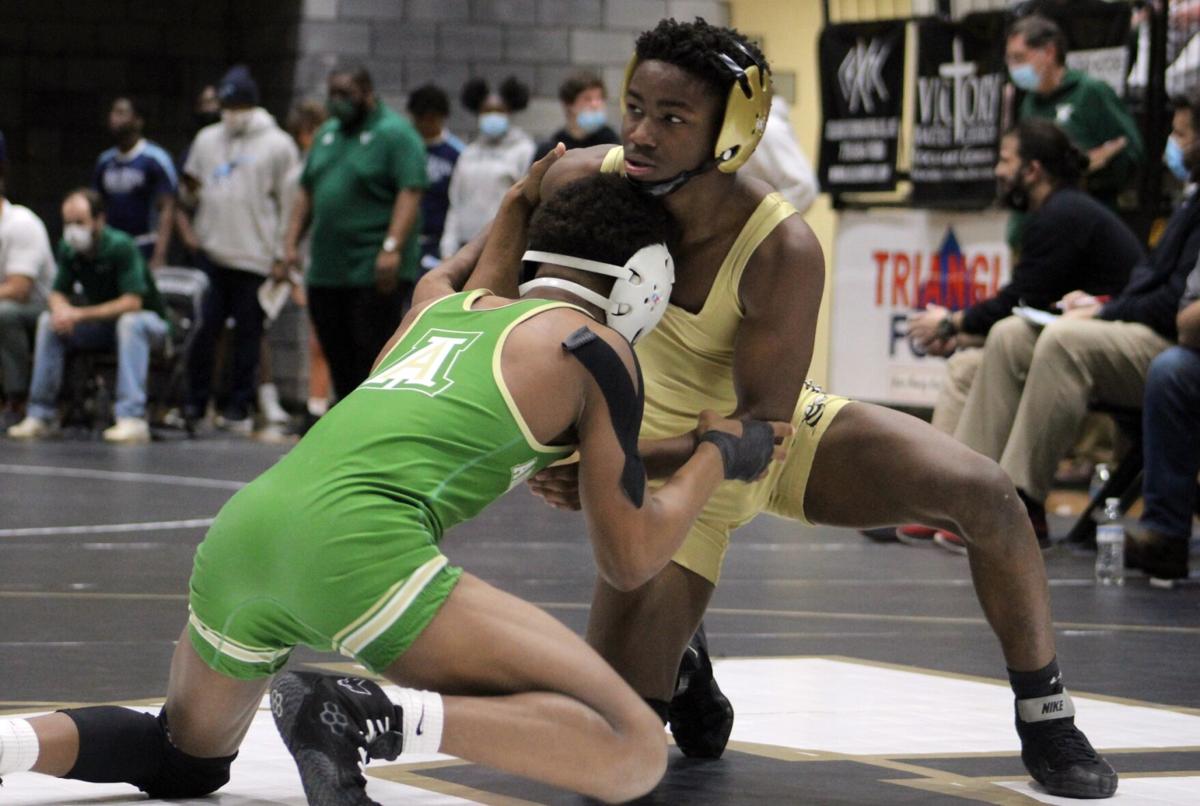 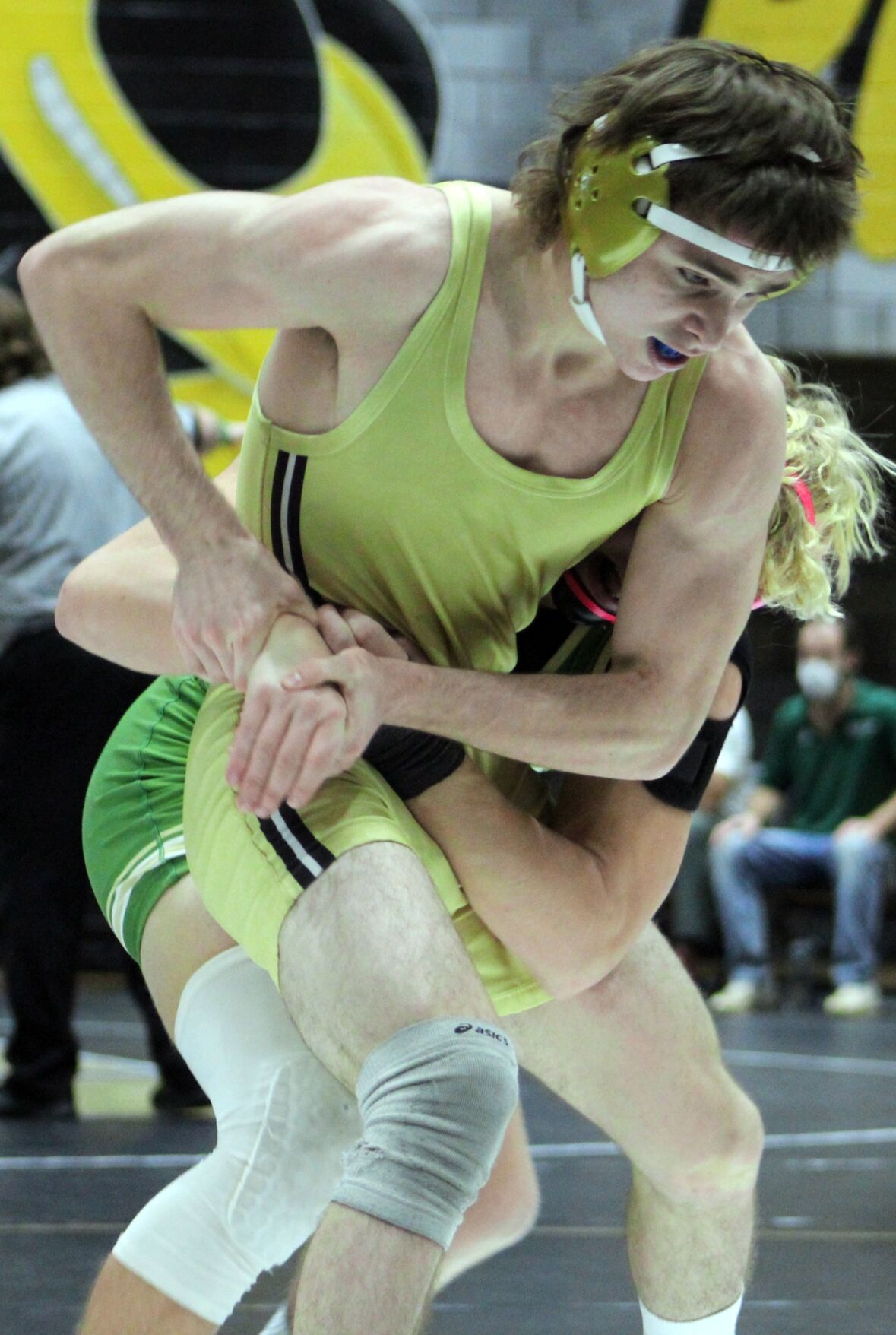 Rockmart's Gunner Chambers works to get out of the grip of Adairsville's Hayden Blalock during their 132-pound championship match during Friday's Area 4-3A traditional tournament. 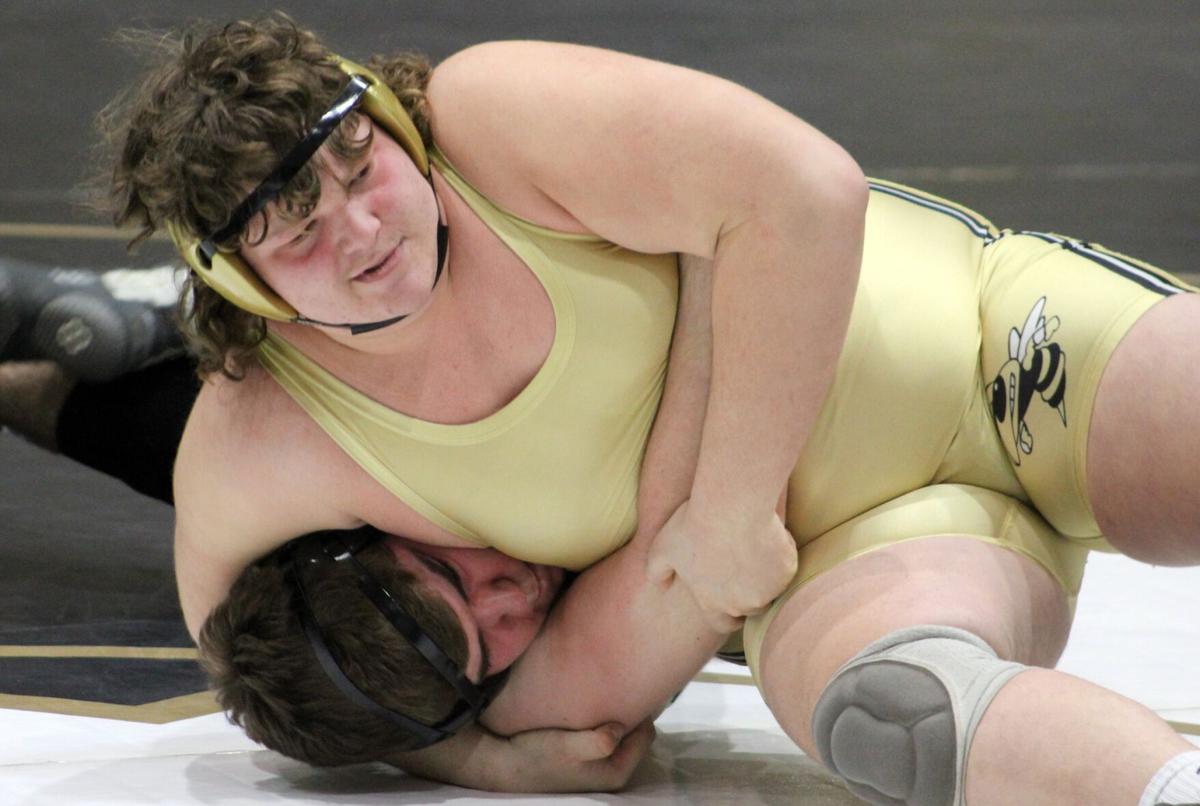 Rockmart’s Dalvin Millhollan (top) wrestles Adairsville’s Westin Porter for the 160-pound title at the Area 4-3A tournament Friday, Feb. 5, at Rockmart High School. Millhollan was one of eight Jackets to win their weight class at the event.

Rockmart's Gunner Chambers works to get out of the grip of Adairsville's Hayden Blalock during their 132-pound championship match during Friday's Area 4-3A traditional tournament.

The battles were hard-fought for the Rockmart wrestling team on Friday evening as the Jackets hosted the Area 4-3A traditional tournament.

Some matches ran the full length of three periods as wrestlers did their best to claim a berth in the Class 3A state championship bracket or, even more, an area title to add to the resume.

While there were close calls, Rockmart proved its area dominance once again with eight individual champions and 13 of 14 wrestlers qualifying for state with top-three finishes. The combined effort gave the Jackets the area traditional team title to go with the area duals title it had won just three weeks earlier.

“There is no doubt who the best team in the area has been this year and that is a tribute to these kids,” Rockmart coach Drew Lindsey said after a quick-paced area tournament.

“But the kids have worked hard all year. We’ve been successful all season and, you know, this is what we trained for, these last few weeks, and we’ve been very lucky with COVID. We’re just glad to be wrestling and we’re going to see how it all unfolds next week.”

The team will load up and head to Macon on Tuesday for the GHSA State Wrestling Championships, held at the Macon Centreplex. Class 3A competition starts Wednesday, with the semifinals and finals scheduled for Thursday evening.

Rockmart took first in the team standings with a final tally of 211, ahead of second-place Adairsville (181) and Greater Atlanta Christian (99).

Chambers, Turner, Ammons and Davis won their finals matches by fall, while Davis and Pace each ran up the points in their championship bouts and won by technical fall with Davis finishing with a 20-2 lead and Pace winning 20-3.

Beavers and Adairsville’s Issac Linley had one of the closest matches in the finals, with the Rockmart wrestler leading only 4-3 after the second period. Beavers got back control in the final two minutes, however, and won with a 12-7 final score.

Millhollan, the lone senior for the Jackets, also battled in his finals match, holding off Westin Porter from Adairsville to win a 9-3 decision.

“Going into today we had zero area champions on the season. None of our guys had ever won area. So those eight guys did something today that they’ve never done before. So those guys did great,” Lindsey said.

“We only have one senior so we’re young. We’re gonna work hard to continue to get better.”

Finishing second for Rockmart on Friday was Bleu Winters (126), Hunter Wilson (138) and Logan Fay (152). Third-place finishers were Skylar Edwards (170) and Cameron Jenkins (182), while Hugo Rangel came up just short of third place by losing in the consolation finals at 195 pounds to finish fourth.

Just a couple weeks removed from coming in third at the Class 3A state duals, Lindsey said they are looking to bring home more hardware this week.

“We’d like to bring home another trophy, just like we did for the state duals, and it’s going to take all 13 of them,” Lindsey said.