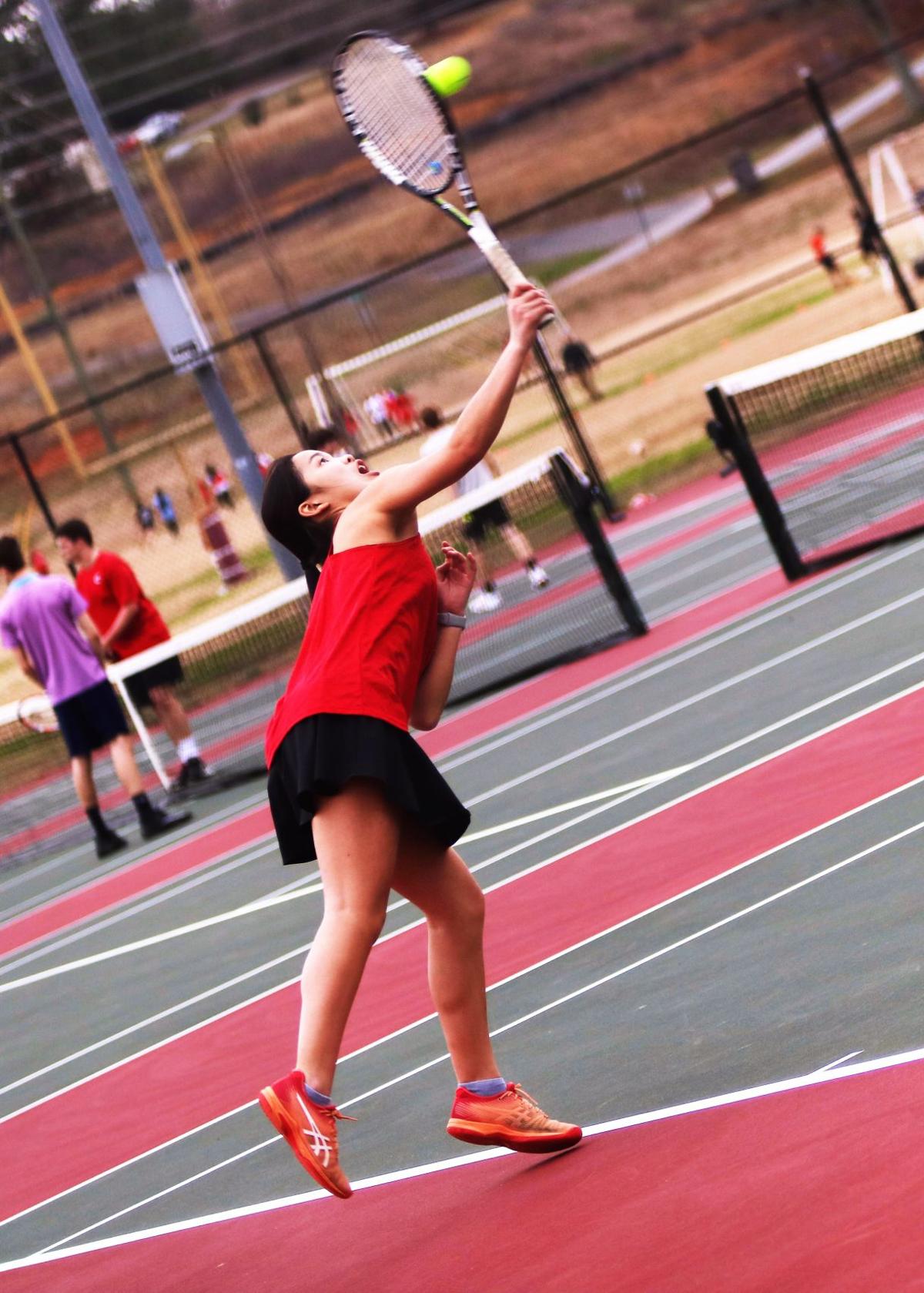 Katie Puckett hits a return shot against Troup County during the Lady Bulldogs win over the Lady Tigers. 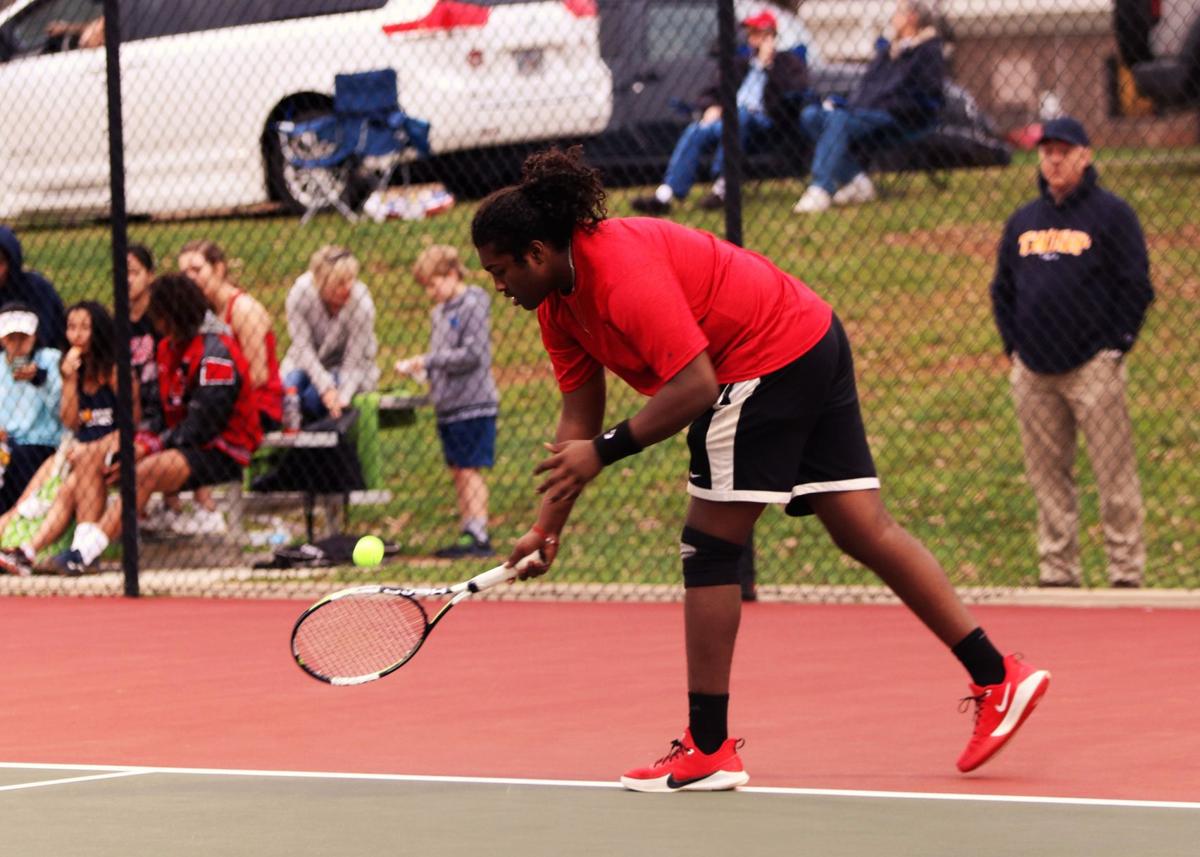 Jayan Kent gets ready to serve during a Tuesday match-up against Troup County.

Katie Puckett hits a return shot against Troup County during the Lady Bulldogs win over the Lady Tigers.

Jayan Kent gets ready to serve during a Tuesday match-up against Troup County.

After last week’s tough defeats against LaGrange, the Bulldogs and Lady Bulldogs were able to knock off the Grangers’ rival Troup County. The wins put Cedartown in good shape in the Region 5-4A Standings.

The Lady Bulldogs bounced back in a big way by beating the Lady Tigers 5-0. No. 1 singles Campbell Parham won 6-1, 6-2, while no. 2 singles Katie Puckett finished on the good side of a 6-2, 6-1 decision. Reagan Clark won each game in both sets in her 6-0, 6-0 performance. Rachel Helmes and Alyssa Parham did great work in no. 1 doubles action, while Haley Forrister and Tish Ann McLendon won each game for the no. 2 doubles match.

Jayan Kent massively stepped up for the Bulldogs on Tuesday. After tweaking his leg in the loss to LaGrange last week, the senior was able to outlast Troup’s best 7-5 in the first set before winning 6-0 in set two to win the no. 1 singles match. Brevin Barnes picked up a 6-0, 6-1 victory in no. 2 singles action while Tanner Arnold recorded a forfeit win for no. 3 singles. Grant Hendrix and Isaiah Beck were the only Bulldogs to fall to Troup County, as they came up short in two sets to the Tigers. Fortunately, no. 2 doubles partners Braden Shelton and Efrain Iglesias won 6-1 in both sets to earn CHS’s boys squad the 4-1 team victory.

As one could imagine, Cedartown tennis coaches Matt Foster and Matt Bentley (the pair are locally known as Matt-squared) we’re excited with the outcome.

“We had a very good night getting some quick, decisive wins over good Troup teams,” said Foster. “Jayan had one of his best comebacks in his career, getting down early in the first set only to force and win a tiebreaker. He then blasted through the final six games to earn the win.

“What impressed me was how Jayan refocused his thoughts in the first set and quickly dispatched his opponent,” said Coach Foster. “It was easily one of the most exciting matches I’ve seen at CHS.”

Despite having to miss a ton of matches due to weather, Cedartown tennis has performed very well so far in their 2020 campaign. The girls and boys squads both sit at 2-1 (1-1) with wins over Pepperell and Troup County paired with the only loss to LaGrange.

They were scheduled to travel to Sandy Creek today, but Mother Nature had other plans. That region game will be rescheduled.

During a rival night showdown at Cedartown between the Bulldogs and Rockmart’s teams, the schools split wins. The Lady Bulldogs took a 3-2 win over the Lady Jackets. Rockmart got the better of Cedartown in a 3-2 win as well.

The Latest: Trump swipes at China for virus, trade deal

Dutch government to take Russia to European court over MH17

US bets on small, untested company to deliver COVID vaccine

Need some COVID-19 relief? Tune in to the Leukemia and Lymphoma Society’s Comedy for a Cure event

$705,000 worth of drugs seized in major drug trafficking bust in North Georgia