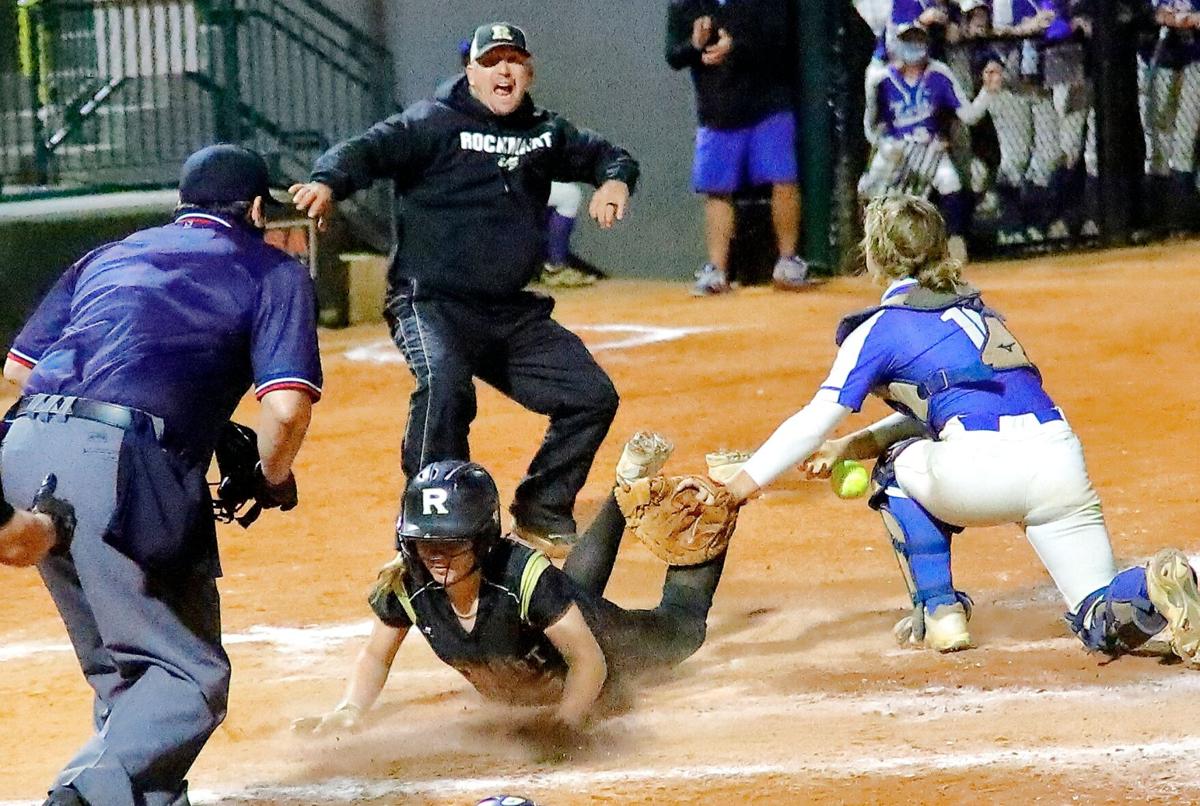 Rockmart softball coach Steve Luke reacts as Lady Jacket Analee Morris slides safely into home plate to score the winning run in last Friday’s 7-6 win over Ringgold in Columbus. Rockmart would play the Lady Tigers twice on Saturday, losing both games to come up short of a state championship. 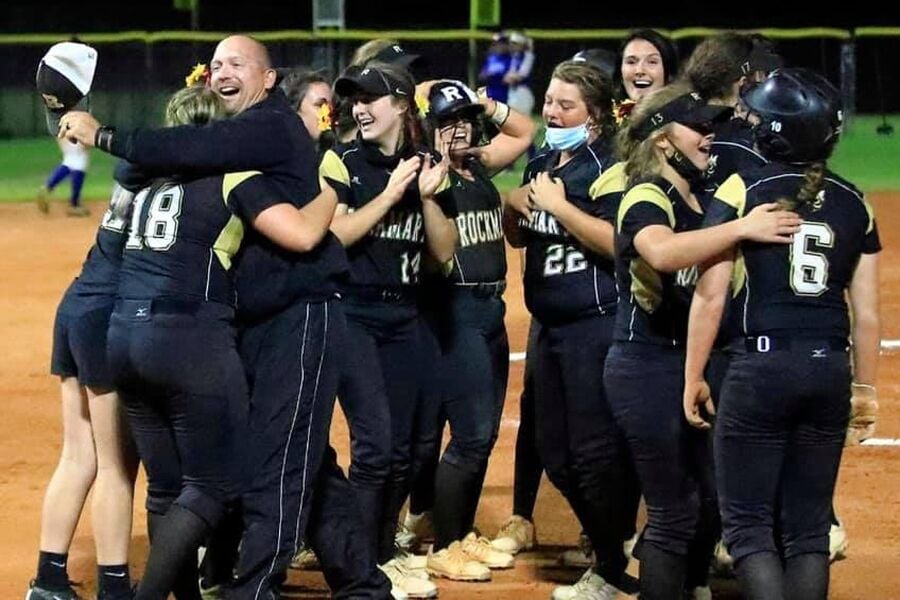 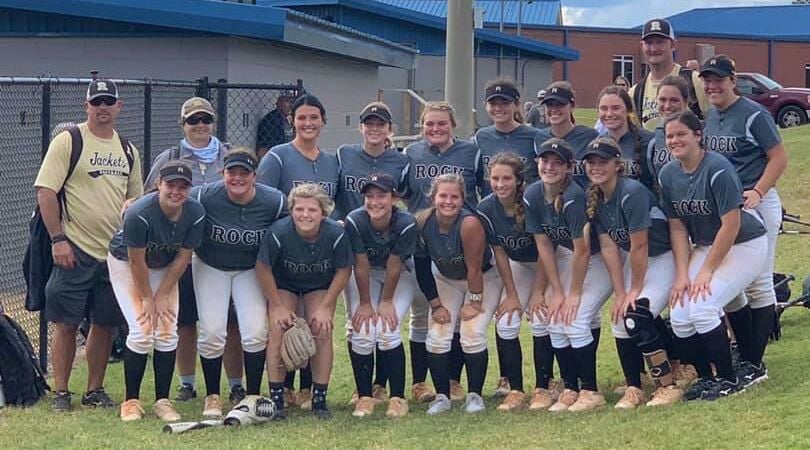 The Rockmart High School softball team pulled off its second-straight comeback performance Wednesday, defeating Southeast Bulloch 5-2 in Game 3 of the Elite Eight to win the series and advance the Class 3A Final Four.

Rockmart softball coach Steve Luke reacts as Lady Jacket Analee Morris slides safely into home plate to score the winning run in last Friday’s 7-6 win over Ringgold in Columbus. Rockmart would play the Lady Tigers twice on Saturday, losing both games to come up short of a state championship.

The Rockmart High School softball team pulled off its second-straight comeback performance Wednesday, defeating Southeast Bulloch 5-2 in Game 3 of the Elite Eight to win the series and advance the Class 3A Final Four.

In a season where the Rockmart Lady Jackets faced adversity at nearly every turn, they took it to the brink of winning a state championship on Saturday.

But one team ended up standing in their way.

After surviving back-to-back elimination games in the Class 3A Sweet 16 and Elite Eight playoff series, Rockmart’s softball team came one win away from winning the state championship.

But fellow Region 6-3A team Ringgold, which had worked its way from being the region’s No. 4 seed all the way to the Final Four at the GHSA State Tournament in Columbus, defeated the Lady Jackets twice on Saturday to deny Rockmart a state title.

Rockmart, which went into the playoffs as the No. 3 seed from Region 6-3A, had defeated Ringgold in each of their three regular season meetings but knew of the talent the Lady Tigers had at their disposal.

After defeating Oconee County 7-2 in its first game in Columbus on Friday, Rockmart squared off with Ringgold for the fourth time this season and came back from being down 6-5 in the seventh to win in extra innings on a walk-off hit by Gracey Arnold in the eighth.

The Lady Jackets (28-11) needed just one win on Saturday to win their second state championship in four years but had to wait for the consolation game between Ringgold and Pike County to determine who they would play next in the double-elimination tournament.

Ringgold dominated Pike, winning 16-2 in a run-ruled shortened affair after just four innings, to set up a rematch with Rockmart less than 24 hours after their thrilling contest the night before, with the Lady Tigers needing to beat Rockmart twice to win their second straight state title.

Rockmart took a 2-0 lead into the fifth inning of Game 1, but Ringgold attacked in the fifth inning, scoring six runs, including a three-run homer by Caroline Hemphill. The Lady Tigers added three insurance runs in the seventh to win 9-2.

In an elimination scenario once again, Rockmart tried to get its offense working early in Game 2, pushing across three runs in the first and then getting a three-run bomb from freshman Briley King in the third to put the Lady Jackets up 6-0.

But Ringgold did what they had done before and started scraping away at Rockmart’s lead, scoring four runs in the bottom of the third, one in the fifth and one in the sixth to tie the game up.

With the score still knotted up at 6-6 after the regulation seven innings, the two teams went to extra innings for the second time in as many days.

Rockmart failed to push a run across in the top of the eighth, but Ringgold managed to pull off the comeback as Riley Nayadley reached second on an error and scored from second on a bunt by Jade Gainer.

Rockmart’s young squad grew up fast this season, dealing with the death of teammate and head coach Steve Luke’s oldest daughter Tori Luke as the result of a tragic accident in July just before the season began.

They defeated two region champions in the state playoffs — Sandy Creek (5-3A) and Southeast Bulloch (3-3A). Both series were decided in three games.

Playing on Wednesday, Oct. 28, Rockmart’s softball team took a 5-0 lead over host Southeast Bulloch into the bottom of the sixth inning and held on to punch their ticket for Columbus and the GHSA State Softball Tournament.

A scoreless game was broken up in the top of the fourth by the Lady Jackets with a run. Emilee Register had a two-RBI hit as part of a three-run fifth for Rockmart, and the visitors tacked on one more in the sixth.

Southeast Bulloch (19-10) pushed two runs across in the bottom of the frame, but that would be all the home team could muster.

Register allowed just two runs while striking out four in the complete-game effort. Sam Wolfe and Megan Johnson each had an RBI, while Alexis Teems led all batters with two hits.

The host team got out to a 3-0 lead after the first inning and answered Rockmart’s two-run fourth with a two-spot of its own on the way to an 8-3 win in Game 1 on Tuesday.

Register struck out six and gave up eight hits in the Elite Eight series opener. Gracey Arnold and Analee Morris each had two hits for the Lady Jackets.

Game 2 of Tuesday’s doubleheader started with Southeast Bulloch once again opening scoring, this time with just a one-run top of the first.

But dialed-in pitching from Register and RBIs from Wolfe and Maddie Owens was enough to quell any thoughts of a sweep for the host team as Rockmart hung on for a 2-1 win.

The Lady Jackets score once in the second and again in the third to complete the scoring for the rest of the game. Register struck out eight and scattered three hits, while Johnson had two hits to lead Rockmart’s efforts at the plate.

At 78 and the oldest president, Biden sees a world changed

The Latest: Spain military commander out for jumping line

Biden seeks to juice economy as Congress spars over stimulus

'Now he'll be able to get the job he deserves': Cobb DA begins making good on promise of 'restorative justice'