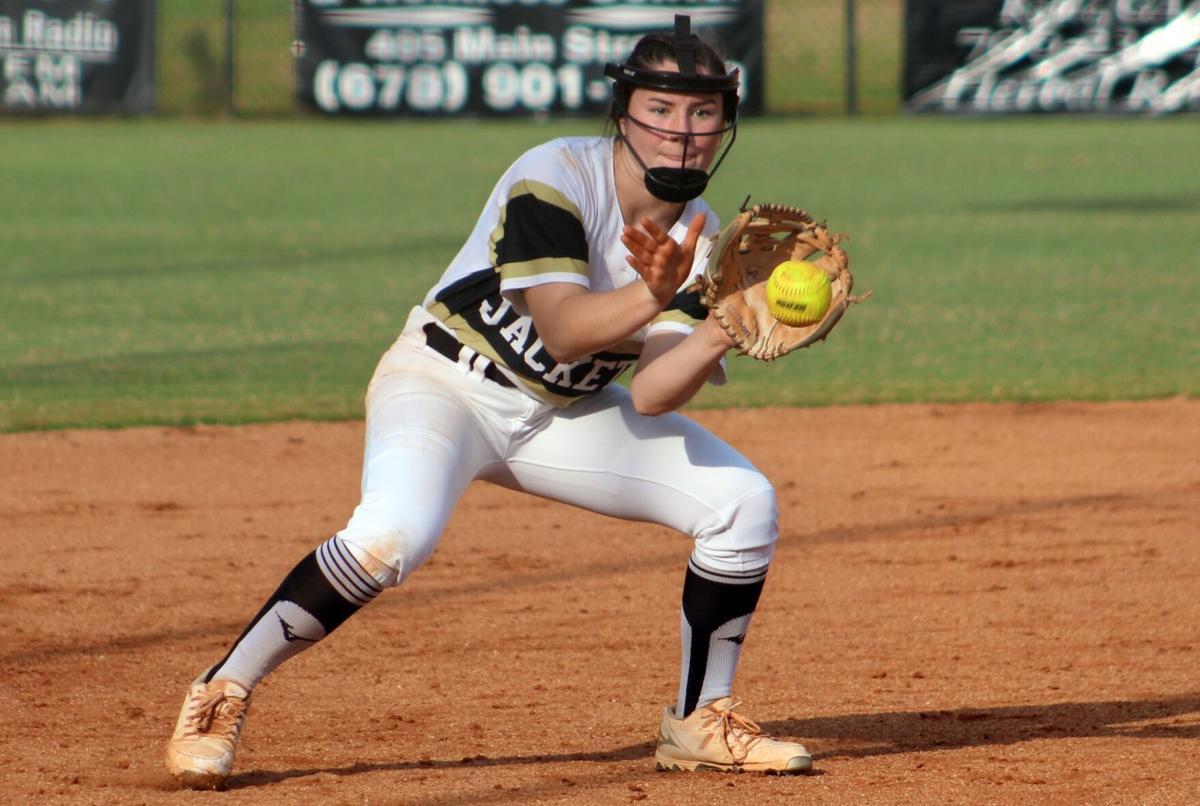 Rockmart’s Sam Wolfe gets the ball after a hit by an Adairsville batter during last Thursday’s doubleheader at Rockmart High School in the Region 6-3A playoff series. The Lady Jackets will host Ringgold to determine the region’s No. 3 and No. 4 seeds in the state playoffs. 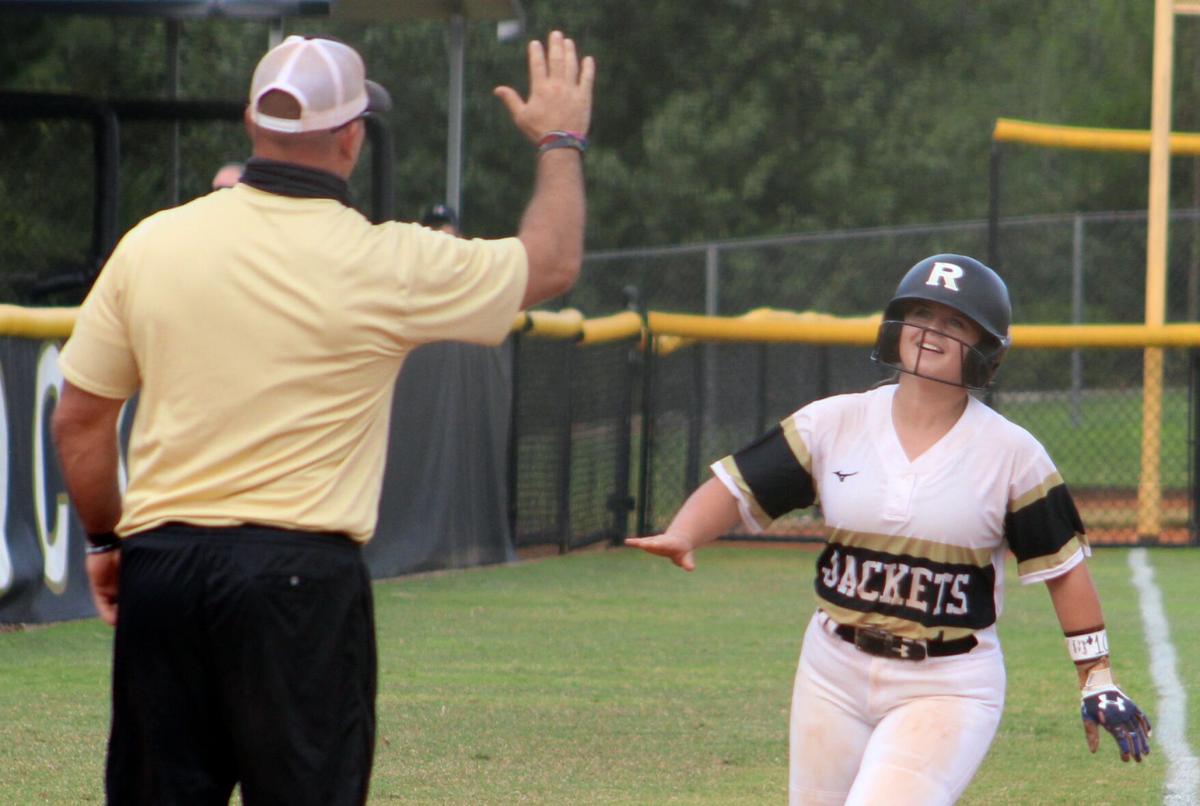 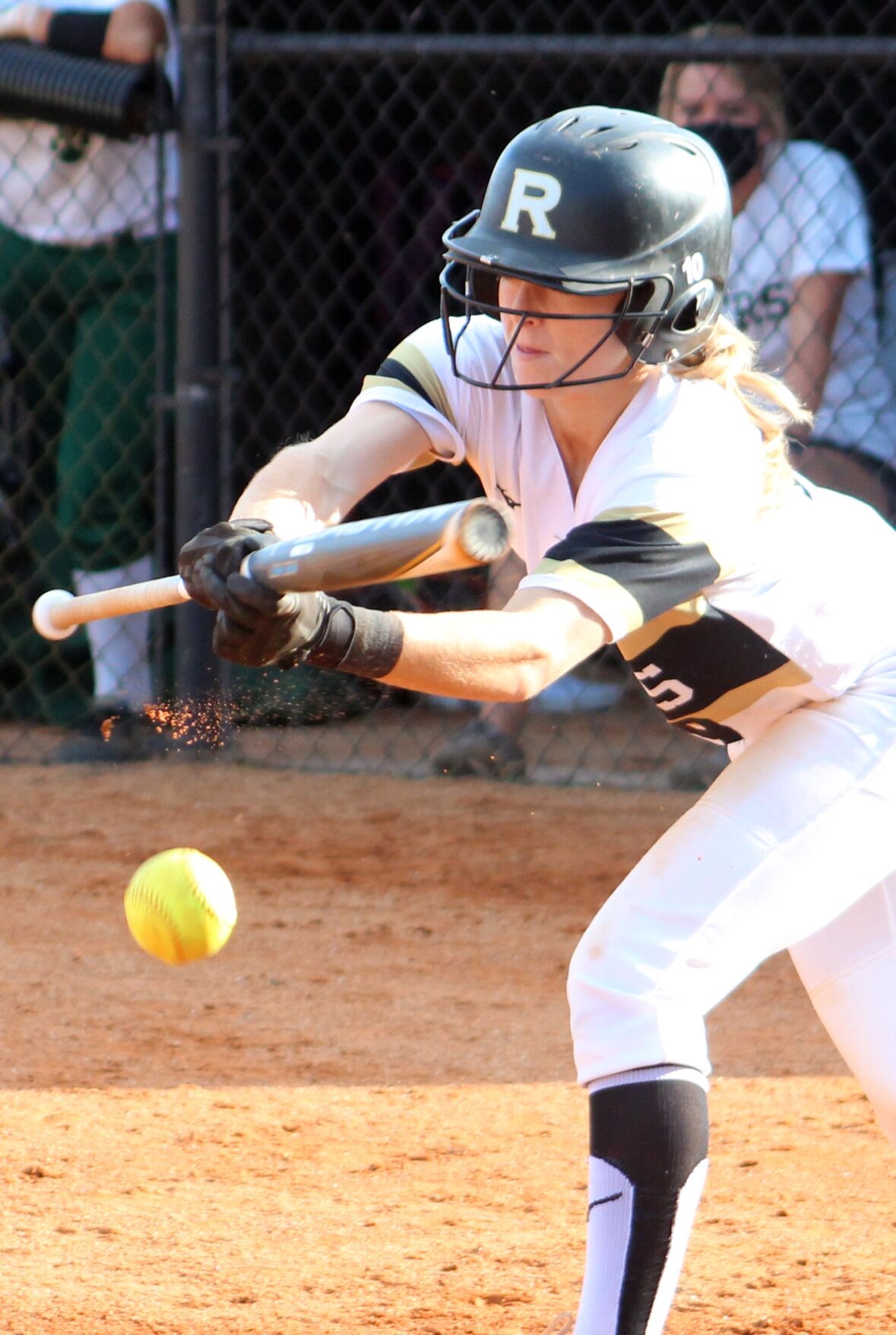 Rockmart’s Alexis Teems lays down a bunt during an at-bat in Game 2 of the Lady Jackets’ doublheader against Adairsville last Thursday.

Rockmart’s Sam Wolfe gets the ball after a hit by an Adairsville batter during last Thursday’s doubleheader at Rockmart High School in the Region 6-3A playoff series. The Lady Jackets will host Ringgold to determine the region’s No. 3 and No. 4 seeds in the state playoffs.

Rockmart’s Alexis Teems lays down a bunt during an at-bat in Game 2 of the Lady Jackets’ doublheader against Adairsville last Thursday.

It will be nearly a week between games when the Rockmart softball team hosts Ringgold on Thursday.

After the gauntlet that the Lady Jackets had to run last week, the break will be much needed.

Rockmart played a total of five games in the course of five days last week, ending with a drawn-out, 5-2 win over Adairsville on Friday that secured the Lady Jackets a berth in the Class 3A state playoffs.

After splitting with the Lady Tigers in a doubleheader on Thursday to start the region playoff series, Rockmart was forced into a decisive Game 3 that was held amid rain delays on the Lady Jackets’ home field.

Adairsville broke open the scoring with two runs in the fourth, but Rockmart answered with a pair of runs in the bottom of the inning to even things up. The home team then added two more in the fifth and one in the sixth while keeping the visitors, and the rain, at bay.

Gracey Arnold had two RBIs for Rockmart, while Alexis Teems finished with three hits in the victory.

Emilee Register, Rockmart’s ace who pitched every inning of every game last week, struck out six while earning an RBI while at the plate. The senior completed the week with a 4-1 record and 38 strikeouts.

Rockmart (19-7) will be either the No. 3 or No. 4 seed from Region 6-3A in the state playoffs. Thursday’s game against Ringgold at Rockmart High School will determine the order, with the winner taking the No. 3 seed and the loser No. 4.

The start of last week’s series with Adairsville was a rocky one for the Lady Jackets as they gave up a two-run lead in the top of the fourth with a string of errors leading to a three-run inning for the visiting Lady Tigers, who went on to win 4-2.

Teems led off the bottom of the first with a walk and then scored on an RBI-single from Register, while Arnold smacked a solo shot over the left field fence in the third. That would be all the offense Rockmart could muster, finishing the game with just two hits.

Game 2 saw Rockmart’s bats come alive a little more as the Lady Jackets had eight hits and used a three-run seventh to provide enough insurance to get a 6-3 win and force a Game 3.

The Lady Jackets began last week with back-to-back Region 6-3A victories. Arnold and Morris had two RBIs each in a 6-3 win over Ringgold on Monday, Oct. 5, while a fifth-run inning against Lakeview-Ft. Oglethorpe the next day put Rockmart on top on the way to a 7-2 win.

Register had nine strikeouts against LFO and finished with three hits and four RBIs. Teems was next on the team with two RBIs.

The Latest: WHO: Europe reaches 10M of 44M global cases

Man killed when tree fell on residence has been identified

Police: Pedestrian who was struck by car was a woman from Marietta

Imler pledges $50,000 match for donations to The Strand Theatre

Here's a list of road closures in north Fulton