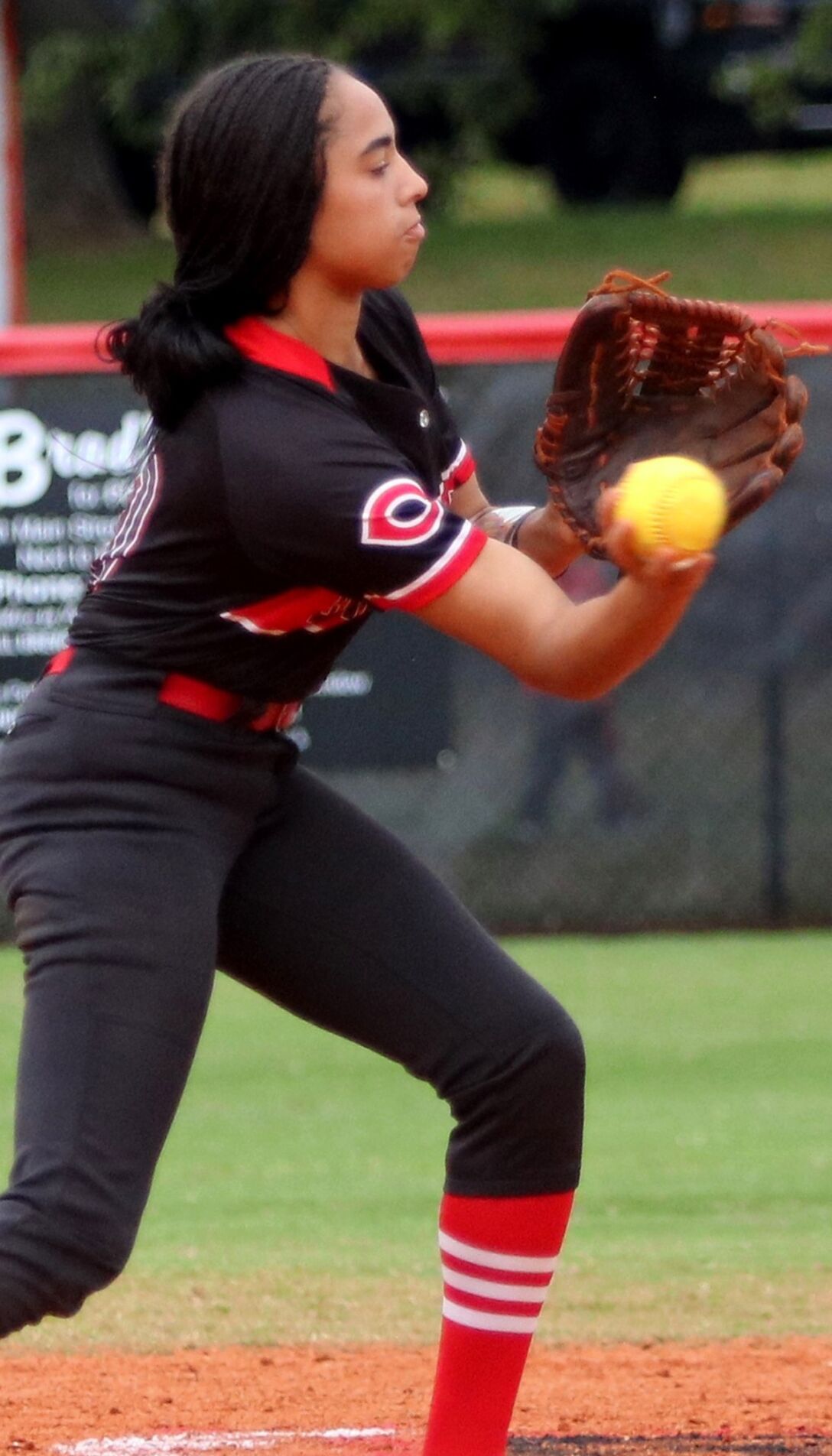 Cedartown’s Roslyn Blankenship turns to make a throw to second base during a game against Southeast Whitfield on Wednesday, Sept. 23, at Cedartown High School. 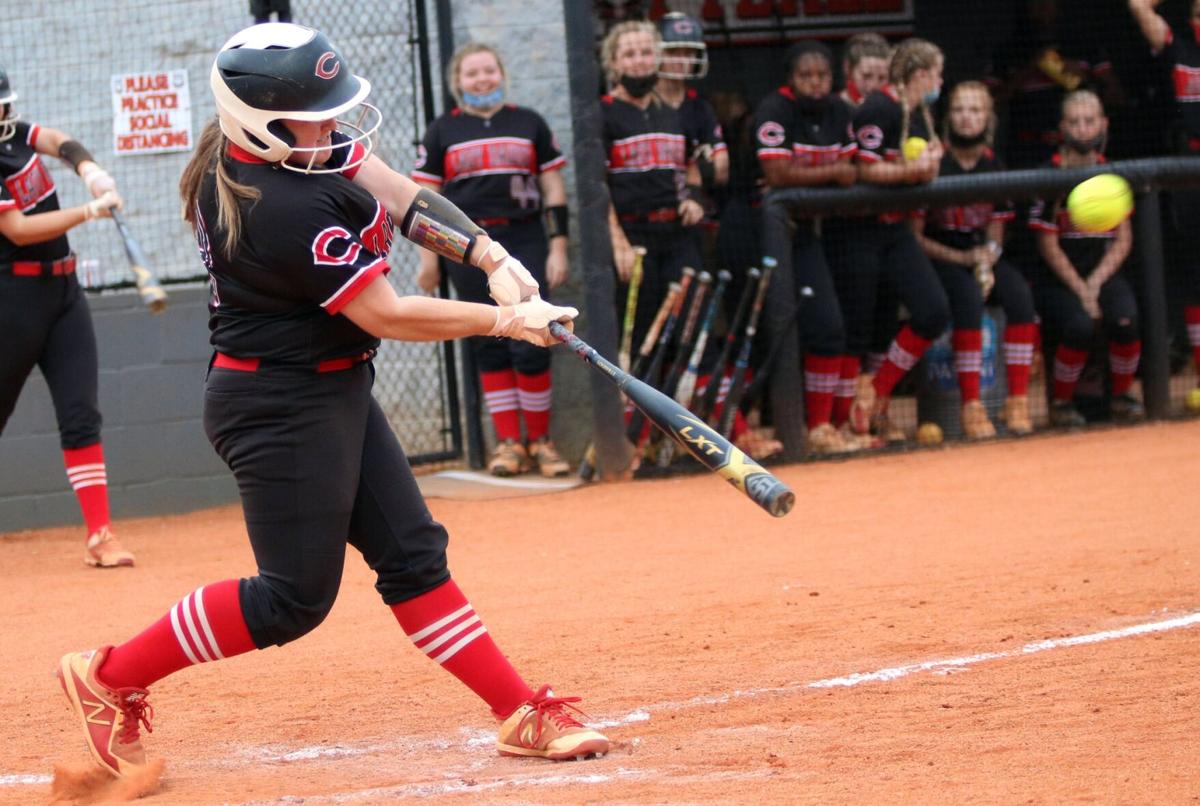 Cedartown’s Carlie Holland makes contact for a home run against Southeast Whitfield during a game Wednesday, Sept. 23, at Cedartown High School. The Lady Bulldogs won 9-1 to complete a series sweep of the Lady Raiders.

Cedartown’s Roslyn Blankenship turns to make a throw to second base during a game against Southeast Whitfield on Wednesday, Sept. 23, at Cedartown High School.

Cedartown’s Carlie Holland makes contact for a home run against Southeast Whitfield during a game Wednesday, Sept. 23, at Cedartown High School. The Lady Bulldogs won 9-1 to complete a series sweep of the Lady Raiders.

In a week chock-full of action, the Cedartown Lady Bulldogs answered the call and completed two big region sweeps.

The softball team defeated Ridgeland on Monday, Sept. 21, and Southeast Whitfield last Tuesday and Wednesday before dropping a non-region contest against Cartersville on Saturday.

Cedartown ended the week at 15-9 overall and 9-6 in region play. The Lady Bulldogs currently own third in the Region 7-4A standings ahead of Northwest Whitfield (5-6 in region play).

A 12-4 victory over Ridgeland in Rossville was highlighted by a full team effort at the plate. Marycille Brumby finished 4-for-4 with three RBIs and two runs scored. The junior infielder crushed her fifth homer of the season and recorded a triple in the win.

Roslyn Blankenship hit her third four-bagger of 2020. Makayla Jordan and Ava Allred tallied two RBIs each against the Lady Panthers. Reagan Clarke allowed three earned runs in five innings on seven hits and five walks. She struck out three batters. The five-inning mercy-rule gave Cedartown their third win over Ridgeland of the season.

Cedartown had a successful trip to Dalton last Tuesday, scoring two wins over Region 7-4A foe Southeast Whitfield. Game 1 was decided in five innings as the Lady Bulldogs reigned superior with a 9-1 triumph. Brumby was 3-for-4 with four RBIs and three runs, hitting her sixth home run of the year. Carlie Holland was 3-for-3 with three runs batted in, while Taylor Westmoreland scored twice. Emme Arp allowed no earned runs on two hits and one walk in five innings of work.

Game 2 against the Lady Raiders finished 8-0 in five innings. Clarke struck out four batters and allowed only three hits in five innings. Alexas Poole hit her sixth homer in the five-inning victory while Holland, Allred, Brumby, and Reagan Peek had great games at the plate.

Senior Night could not have worked out any better for the Lady Bulldogs on Wednesday evening. The five seniors being honored — Allred, Blankenship, Holland, Peek and Poole — each had impressive performances in the 9-1 win. Holland and Peek hit their first home runs of the season, while Poole recorded her seventh dinger. Allred had two RBIs and Roslyn Blankenship had numerous defensive gems. Junior Emme Arp earned the start and the win on Wednesday, going six innings and allowing one earned run on one hit, one walk, and two strikeouts.

Peek’s home run essentially worked as a walk-off, putting the eight-run mercy-rule into effect at

Unfortunately, Cedartown could not keep their six-game winning streak alive in Saturday afternoon’s 5-4 non-region loss to Cartersville. The Lady Canes scored all five runs in the top of the first inning and, although Cedartown threatened late, they could not bridge the gap.

Poole was 2-for-3 against Cartersville with two RBIs and one run.

Blankenship, Brumby, Peek, Allred, and Taylor Westmoreland each garnered one hit in the loss.

“I think we’ve taken strides offensively and are competing well,” head coach Eddie Gambrell said. “It is big that we picked up those two region sweeps, but we cannot rest. We have to keep fighting to sure up the three-seed.”

CHS traveled to Bremen on Monday after press time. They are set to host Haralson County at 2 p.m. Saturday in a non-region tilt.